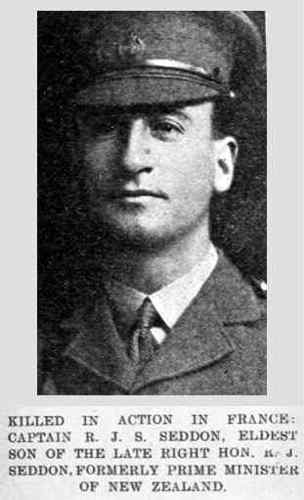 Captain Richard John Spotswood Seddon was born on 29 May 1881 in Kumara, Westland, New Zealand as the eldest son of Richard and Louisa Seddon. His father was the Prime Minister of New Zealand from 1893 until his death in 1906.

Richard Seddon served in the South African War and after his return to New Zealand he was appointed military secretary to the Minister of Defence (then his father). Later he joined the defence staff and in 1911 was sent for training in England but in September 1913 he resigned from the service. At the outbreak of the war he wished to enlist but it was not until August 1918, he was back in the frontline. Richard Seddon had only been in France a few days when he was killed on 21 August 1918. He was buried near where he fell but was later reburied at Hebuterne Military Cemetery.

Captain Seddon’s E-file consists of correspondence between his family and the IWGC, mainly focussed on the attempts by his family to have his remains repatriated.

The first contact with the IWGC was made in September 1918 by Lt. Stuart Seddon regarding the death and burial place of his brother. He had located his brother’s grave, noted the map reference and marked it with a cross and was hoping to have a photograph of it for his mother. At that point the exact grave location was not known by the Commission but it was promised that when the circumstances allowed a search would be carried out and if a trace of the grave would be found, it would be registered and the family contacted.

In December the New Zealand High Commission unofficially approached Fabian Ware to enquire whether at some point it would be possible for Mrs Seddon to bring the remains of her son back to New Zealand for reburial. In his reply Fabian Ware referred to the statement that had appeared in the newspapers on 29 November, explaining why the remains of officers and men of the armies of the British Empire could not be moved away from the war areas.

Undeterred, Louisa Seddon then used all her contacts to try to bring about the repatriation of her son’s remains.

For his part Fabian Ware, while sympathetic to the wishes of a bereaved mother, was unable to alter the stance of the Commission against repatriation, one of its key principles in its attempt to provide equality of treatment for all.

The stage was set for a battle of wills; a battle played out in ink and type.

In the summer of 1919 Mrs Seddon visited her son’s grave with some of her other children. Soon afterwards she officially asked (through the New Zealand High Commission) for permission to remove the body of her son to New Zealand. Ware explained the current regulations and legislation that would prevent this and that he believed Mrs Seddon was reconciled with the matter, especially as he had promised to keep her informed of any possible changes to the policy.

In December 1919 Mrs Seddon sent a letter to Ware thanking him for his compassion and understanding and hoping that her wish was officially recorded for future reference should the situation ever change. 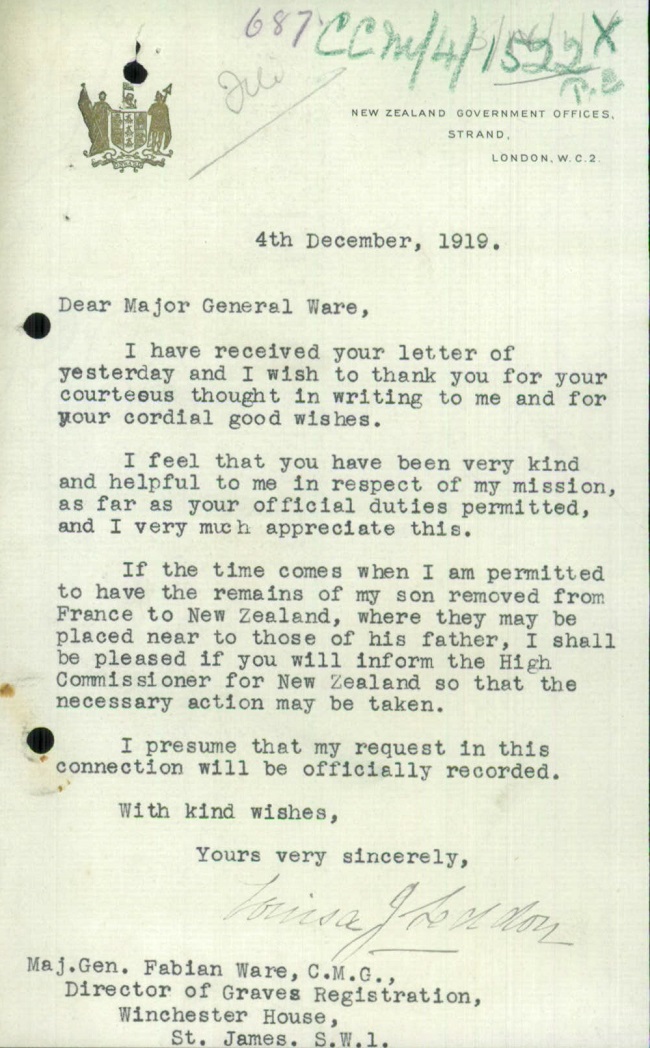 In the spring of 1921, Captain Seddon’s sister, Mrs Frank Dyer visited the grave in France. This visit started another round of correspondence, with Sir Thomas Mackenzie once again contacting Ware - "Do you not think you could now grant Mrs Seddon's request for the body of her son from France. She is now very ill and that great yearning is ever with her.....Do what you can".

Captain Seddon’s case was a big test for the Commission and its principles, and for Fabian Ware’s own personal resolve. While the case was prolonged, and Fabian Ware himself came under intense pressure from some corners, the principles laid out by the Commission stood firm.

While Mrs Seddon never gave up her wish to have her son’s body returned, Captain Seddon’s grave was never moved. It is to be hoped that the pain of her defeat in this matter was in some small way mitigated by the care that her son’s grave has received and continues to receive along with the 760 others in Hebuterne Military Cemetery, under the charge of the CWGC.