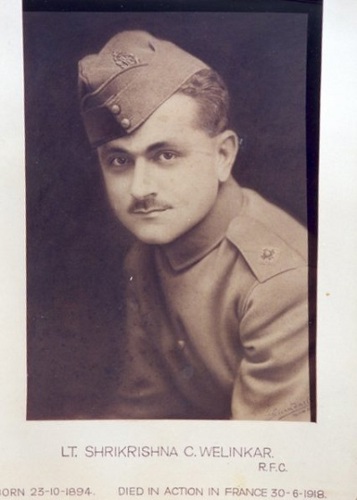 During the First World War, 1.3 million Indians answered the call to fight for the British Empire. Nearly 74,000 of these men would never see their homeland again and are remembered today in cemeteries and memorials throughout the world, including France, Belgium, the Middle East and Africa.

Despite the enormous size of the Indian military contribution, only a few took to the skies in the service of the Royal Flying Corps (RFC) and later the Royal Air Force. Among these early Indian military aviators was Lieutenant Shri Krishna Chanda Welinkar. He was 23 years old when he was badly wounded in a dogfight near Peronne on 27 June 1918 and died three days later in a German field hospital on 30 June 1918. He was later buried in Hangard Communal Cemetery Extension in France where his grave lies towards the rear of the cemetery.

Born on 23 October 1894 in Bombay, India, Welinkar was a well-educated man proficient in many languages including Persian, Arabic and Hindustani. In 1916, he studied History and Law at Jesus College, Cambridge, where his name appears today on a memorial commemorating all members of the college who fell during the war.

Welinkar completed his first steps to becoming an aviator at a flying school in Hendon, Middlesex, where he learned to pilot a biplane and attained his Royal Aero Club certificate in August 1916. He wished to join the Royal Flying Corps, however upon attempting to enlist, Welinkar encountered the same prejudices as his other fellow Indian airmen and he was encouraged to become an air mechanic instead. He subsequently enlisted in the Oxfordshire and Buckinghamshire Light Infantry in February 1917, but he was eventually given a commission in the RFC.

On 10 April 1918, he was given his first operational posting with No. 23 Squadron of the Royal Air Force (RAF), which had recently formed to amalgamate the RFC and the Royal Naval Air Service. Operating out of Bertangles, Welinkar patrolled the skies above the Western Front in a Sopwith 5F.1 Dolphin, a relatively new addition to the RFC/RAFand noted for its speed, stability and manoeuvrability.

On 27 June 1918, at 0945 hours, Lieutenant Welinkar climbed aboard Dolphin D3691 and took off from the aerodrome at Bertangles for what would be his final patrol. He was last seen engaged in combat with a two-seater near Peronne but he did not return and was reported missing. His fate remained unknown for many months afterwards. 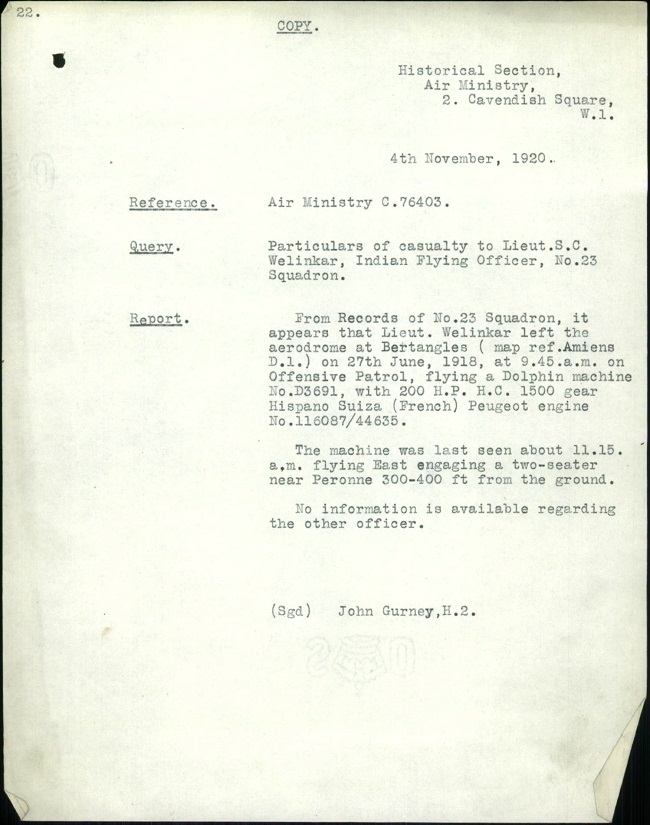 The story of the search and discovery of Welinkar’s grave is revealed in an archive file among those recently released by the Commission and the file contains the correspondence and reports that led to Welinkar’s grave eventually being located. In January 1919, the Directorate of Graves Registration and Enquiries (DGRE) received information that Welinkar was buried at Rouvroy, France. The DGRE corresponded with the commanding officer of No. 23 Squadron in order to locate Welinkar’s grave. The Air Ministry then informed the DGRE that the German Red Cross and the Geneva Red Cross had confirmed Welinkar had died at a field hospital at Rouvroy and was buried in the southern side of the cemetery there.

In March 1920, Wing Commander G. Hilton reported he had visited a number of French localities named Rouvroy, but was unsuccessful in locating Welinkar’s grave. Then, in April 1920, a significant lead in the search arrived; a letter was received from a former Royal Engineers officer known as Colonel G.B. Barton who believed Welinkar had been buried by the Germans in a grave at Rouvroy and marked with a German cross under the name of “Oberleutnant S.C. Wumkar”. Barton reported the local French authorities had then reinterred Welinkar’s grave into Maucourt German Cemetery.

On 7 September 1920, the grave in Maucourt German Cemetery was opened with Colonel Barton in attendance, who was acting as the official representative of Welinkar’s family. A watch and a pair of field boots typically worn by RAF officers were among the effects recovered which Barton was able to determine belonged to an Indian flying officer, but he could not identify it was Welinkar for certain. The then unidentified officer’s remains were then placed in a coffin and reinterred in Hangard Communal Cemetery Extension. It was only later in February 1921 that the identity of the grave was established as Welinkar through information recorded in German lists received for burials at Rouvroy. 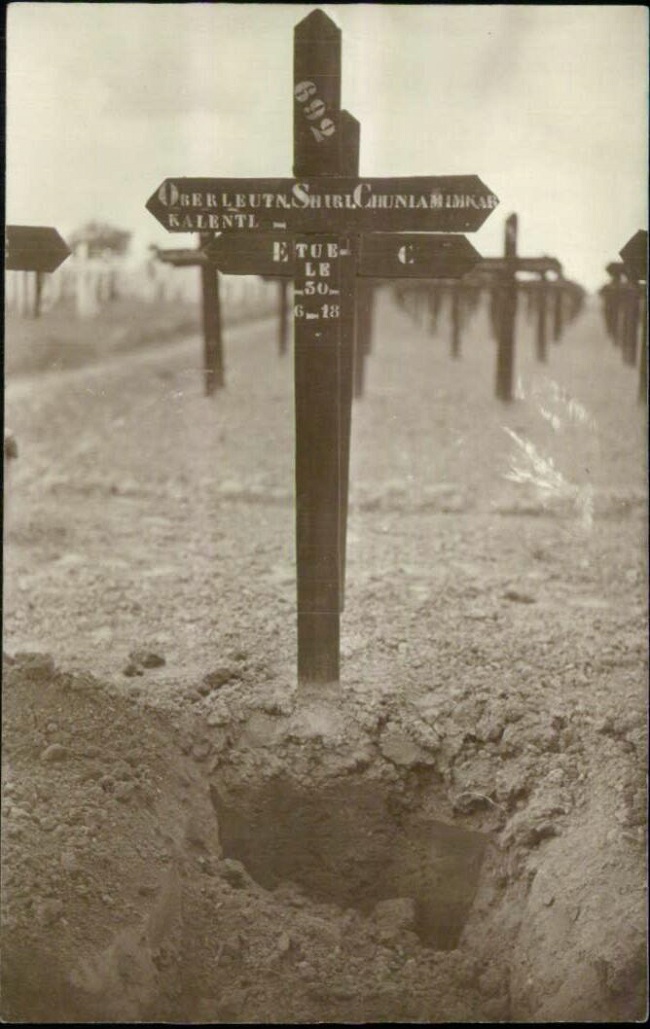 In May 1921, Colonel Barton wrote to the Commission again on behalf of Welinkar’s mother to request that a Commission headstone be placed on the grave at Hangard Communal Cemetery Extension with the following personal inscription: 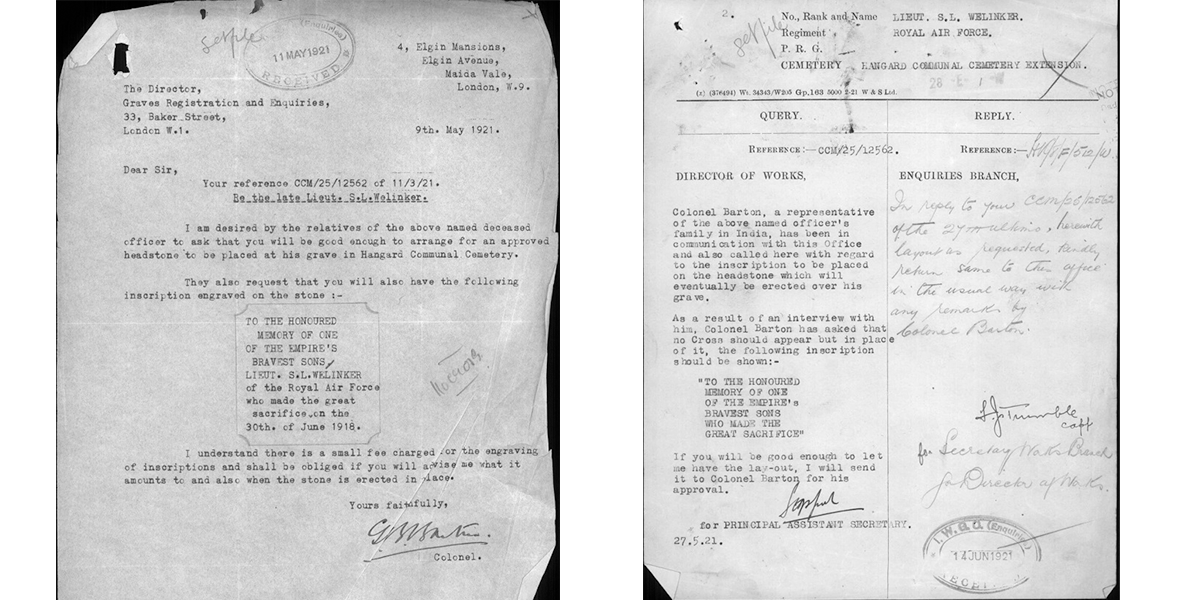 One of the very first people to visit Welinkar’s grave in its new location at Hangard Communal Cemetery Extension was his friend Framreze Vakil who recalled his visit in a letter dated 19 July 1923. 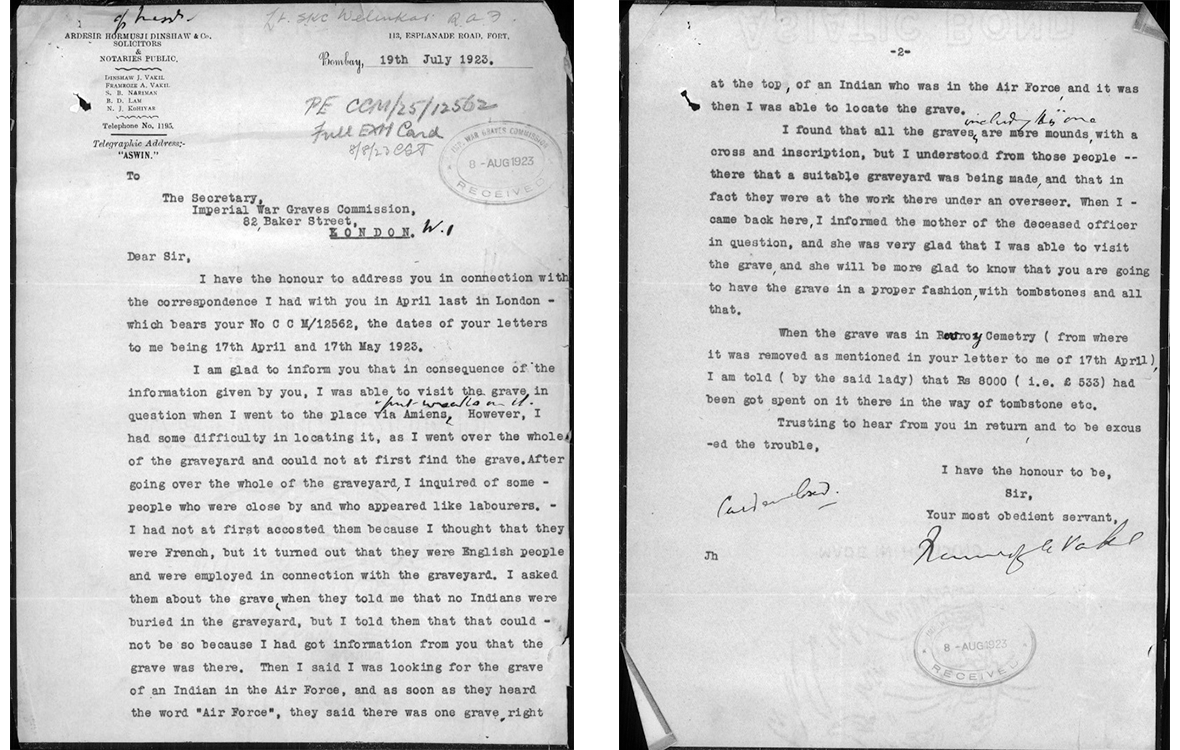 Further correspondence between the Commission and Vakil revealed that Mrs Welinkar had arranged for a private memorial to be erected on the grave when it was in Rouvroy. However, the authorities had not allowed it to be erected as it was not of the approved design permitted in war cemeteries and the stone was reportedly sent back to the mason.

Then in a letter from Mrs Welinkar dated 13 September 1926, she requested that the grave be 'fastened...into the Indian style to serve as a memorial' as well as a number of details about the positioning and location of the grave. The Commission responded it did not understand Mrs Welinkar’s request, but explained that as there was already a Commission headstone over the grave, there could be ‘nothing else of a permanent character to be added to the grave’, in accordance with its policy made in connection with all war graves. 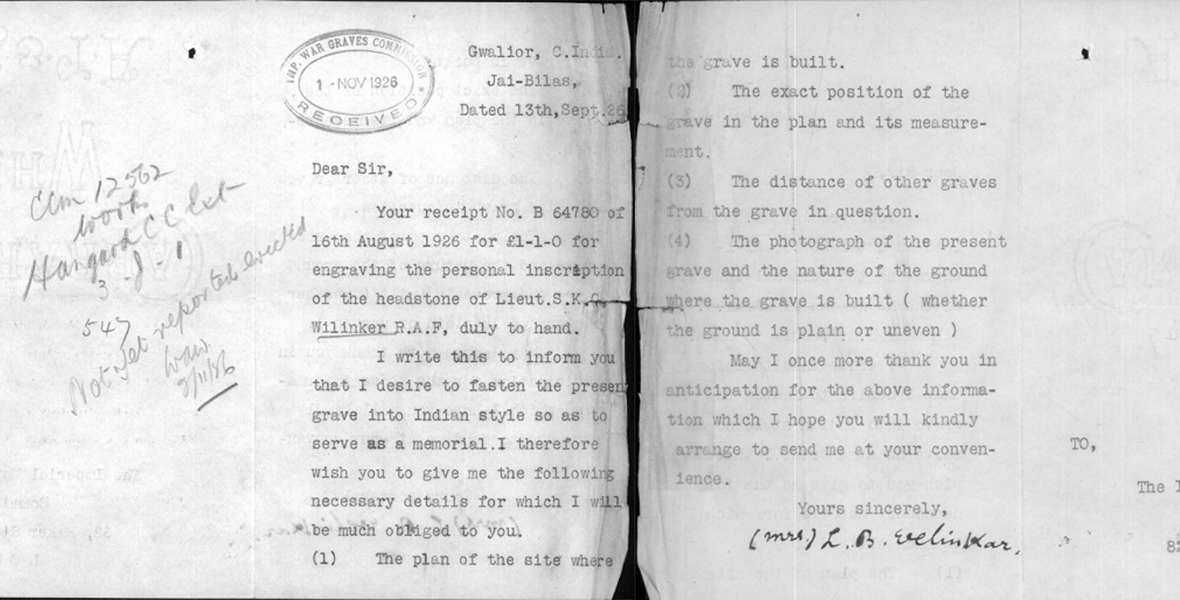 The Indian Ambassador to France His Excellency Sardar Hardit Singh Malik, who is best remembered as the first Indian pilot to be accepted into the RFC and who scored several victories during the war, visited the Arras Flying Services Memorial in 1951 and noticed that the name of his former comrade Lieutenant Welinkar was not present on the memorial. The Commission responded that Welinkar not missing as his grave was known and marked in Hangard Communal Cemetery Extension.

The stories of Lieutenant Welinkar and the other Indian airmen who fought for the British Empire may reflect a relatively small part of India’s role in the First World War, however, the part of Welinkar’s story recorded in the Commission’s Archive shows that his grave was of equal importance to all of the war dead commemorated by the Commission and was to be treated in a manner that, in the words chosen by his family for his personal inscription, respected the memory of ‘one of the Empire’s bravest sons’.