The first thing to note about St. Pancras Cemetery & Islington Cemetery and Crematorium is that neither site is located in the Boroughs of Camden (which includes the former borough of St. Pancras) or Islington, instead they are located in Barnet, in north London. The second point to note is that although technically two separate war cemeteries, each belonging to their respective boroughs, to look at they form a single continuous site which stretches over 190 acres. Over 1,120 Commonwealth servicemen and women are commemorated at St. Pancras Cemetery (512) and Islington Cemetery and Crematorium (617).

Established in the 1854, St. Pancras Cemetery was the first municipally owned cemetery in London. Established a time when London’s population was rapidly expanding, clear land was sort on what was then the outskirts of the city, on Fincley Common in Barnet, north London. Further land was acquired in 1877, and the 190-acre site was divided between St. Pancras and the neighbouring brough of Islington, to form two cemeteries.

Over 1,120 Commonwealth servicemen and women are commemorated at St. Pancras Cemetery, the majority are British servicemen but there are also 10 Canadian, three Australian and one South African serviceman commemorated here. Amongst their number are eleven women of the Auxiliary Territorial Service, Women's Auxiliary Air Force, Women's Royal Air Force and Women's Royal Naval Service. There are also four Belgian and one French servicemen of the First World War.

In St Pancras Cemetery there are 308 First World War commemorations, including 1 unidentified sailor of the Royal Navy, and 208 from the Second World War. Over 100 graves from both wars form a war graves plot. The plot also contains a number of headstones removed from graves scattered elsewhere in the cemetery that could not be maintained. A further memorial bears the names of 27 casualties whose graves could not be marked individually, and six First World War casualties buried in adjacent Islington Cemetery who could not be commemorated there.

A number of those buried in St. Pancras Cemetery & Islington Cemetery died in one of the many military and civilian hospitals in and around London during the two world wars, while others were buried there as they had a family connection to the area. They died of wounds received on the fighting fronts, sickness & disease as well as accidents. A few were killed by direct enemy action including during the V1 and V2 rocket attacks on Britain in 1944-45.

A total of 6,876 flying bombs and rockets hit the UK between June 1944 and March 1945. Nearly 9,000 people were killed, mostly in London, and over 24,000 injured. The highest casualty rate for a single incident was on 23 August 1944, when a flying bomb killed 211 people in East Barnet. On that same day a V1 also stuck Blaxland House, a block of red brick flats on the White City Estate in Hammersmith. 17 people from nine different families were killed and 26 others were seriously wounded. Three of those killed were 18-year-old Ellen Saunders and her parents, George and Ellen Rose Saunders.

George Saunders, who served with the Royal Navy, had returned on leave having been away at sea for nearly three years and his daughter Ellen, was serving with the Women's Royal Naval Service had been stationed at the Royal Naval Air Station Henstridge in Dorset, had been granted leave to visit her father. All three family members were buried together in St. Pancras Cemetery. Their graves could not be marked however, so as serving members of the armed forces George and Ellen are commemorated by the Commission by special memorial in the cemetery, while Ellen Rose, and the 14 other civilians killed at Blaxland House, are recorded in the Commission’s Civilian Roll of Honour, housed in Westminster Abbey. 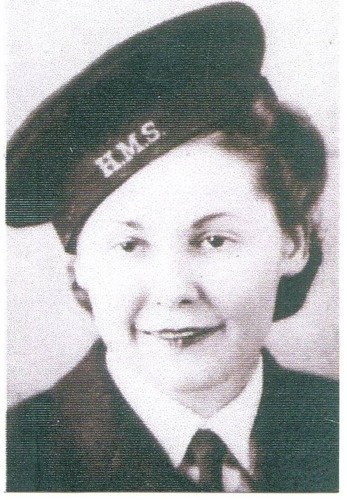 Wren Ellen Saunders with thanks to Michelle

Access to this large site can be gained at multiple locations. The main entrance is from High Road A1000. The cemetery is run by Islington and Camden Cemetery Services and before visiting we recommend that you consult their website.