Hull Northern Cemetery is the final resting place of more than 400 First and Second World War servicemen and women. As one of the largest ports in the north of England, the city was a vital hub of military activity throughout both world wars. The cemetery reflects the cost of the conflict on the local community, with many of those buried here laid to rest by their families.

Hull was the third largest port in England during the First and Second World Wars and the town was home to hospitals that cared for soldiers, sailors and airmen wounded in fighting overseas and in British waters and skies. Closer to home, the men of Hull’s fishing fleet now defended Britain by performing the dangerous and costly task of minesweeping. During the Second World War the city was heavily bombed and along with service personnel buried in the cemetery you will find entire local families who were killed in air raids on the city.

The war plot in the cemetery contains some 55 burials from the Second World War, but the majority are scattered throughout the cemetery. Our screen wall records the names of 56 service people who were cremated at the crematorium next to the cemetery, along with the names of servicemen buried in other cemeteries in the area whose graves cannot be individually marked or maintained. The vast majority of those we commemorate here were members of United Kingdom forces, but there are two of Canadian units, 12 German and one Italian serviceman.

Between 1914 and 1918, the Humberside area supplied over 880 vessels and 9,000 men from the fishing trade to work as minesweepers off the East Coast. More than 300 of these ships belonged to the Hull fishing fleet and the high loss of life suffered by minesweeping crews decimated the industry and had an impact on fishing in the immediate post-war years.

There are more than 400 Commonwealth war dead commemorated in this cemetery, some 300 of whom died while serving in the Second World War. The First World War burials are scattered throughout the cemetery, many in private plots, reflecting the fact that many of these were local men who were serving in the Royal Naval Reserve when they lost their lives.

After the outbreak of the First World War in 1914, several hospitals were established around the city of Hull for military use. Hull Royal Infirmary had over 360 beds for servicemen by 1917. The Royal Naval Hospital in Argyle Street cared for service casualties, the Metropole Assembly Hall in West Street became the Lady Sykes’ Hospital for the duration of the war, and Reckitt’s Hospital also had a small number of beds. Many men recovered from their wounds or disease but some of those who did not are buried in this cemetery, such as Private John Doherty Phillips of 3rd Battalion, Canadian Infantry.

Private Phillips was captured in 1915 and later was repatriated to England, where he was admitted to St. John’s V.A.D. Hospital on 18 November 1918. He died of pneumonia shortly after on 24 November 1918, aged 25 years old. His pneumonia may in fact have been pandemic influenza, or ‘the Spanish flu’, which ravaged the world in 1918-1920.

During the Second World War, Hull was subjected to almost 100 German air raids and over 1,000 civilians lost their lives. Aircraftman 1st Class Hedley Towle, along with his wife Elsie and their three children, was buried in the cemetery after the community air-raid shelter in Waterloo Terrace in which the family were sheltering received a direct hit from a Luftwaffe bomb during an air raid on 31 August 1941. We commemorate the Towle family, and all the other victims of the Blitz, by name in our Civilian Roll of Honour, in Westminster Abbey.

As Britain’s third largest port, Hull was strongly defended by anti-aircraft guns, barrage balloons and ships of the Home Fleet. Despite this, damage to the city and its defences was considerable. The burials in the cemetery reflect this and nearly one-third of those dating from the Second World War are of men from the various arms of the Royal Navy, including trawler men who worked on the patrol vessels and minesweepers. 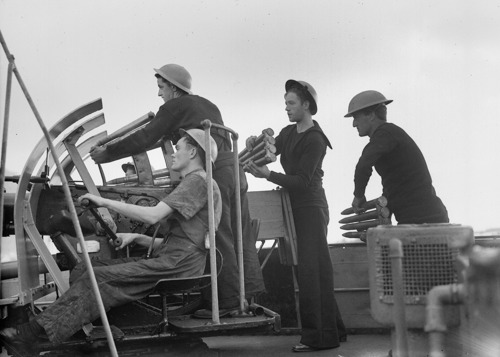 Crew of the anti-submarine trawler HMT ‘Imperialist’, once a Hull fishing trawler, man their Bofors gun, November 1943. © IWM A 20969

Hull’s Northern Cemetery is situated on the road to Cottingham, with the main entrance situated on the corner of Chanterlands Avenue. The War plot can be found at the centre of the cemetery.

Before visiting, we recommend you consult:

Over 320 Commonwealth servicemen and women of two world wars are commemorated here. Many died of wounds at the 2nd Northern General Hospital, one of the largest hospitals in the north of England.

Buried or commemorated at Newcastle-Upon-Tyne (West Road) Cemetery & Crematorium are nearly 200 Commonwealth servicemen and women of the Second World War.