Preston (New Hall Lane) Cemetery contains 324 First World War burials, a number of them forming two war graves groups but the majority are scattered throughout the cemetery. There is also one Belgian war grave from this period and a further 166 burials from the Second World War which are all scattered.

Situated 2.5 kilometres east of Preston city centre in Ribbleton, Preston (New Hall Lane) Cemetery contains burials of both wars, some of them from Fulwood Barracks, the headquarters of the Loyal North Lancashire and East Lancashire Regiments. There are 324 burials from the First World War here, with a number of them forming two war graves groups but the majority are scattered throughout the cemetery. There is also one Belgian war grave from this period. A further 166 Second World War burials are all scattered throughout the cemetery, including a member of the Women’s Auxiliary Air Force. The Cross of Sacrifice, as designed by Sir Reginald Blomfield, stands by the war cemetery entrance. Constructed of Darley stone and standing 14 feet high, the Cross of Sacrifice was unveiled on 25 May 1925 by the Mayor of Preston, Alderman John Roland Hodgson and dedicated by Canon T.J. Morris, Vicar of Preston.

Preston (New Hall Lane) Cemetery was opened in 1855 when most of the other burial grounds in the area were closed. Due to its location on the main railway line to Scotland, many servicemen passed through Preston during the First World War. The railway station was used by local women to host the Preston Soldiers and Sailors Buffet which provided refreshments and a place for soldiers to rest during their journey. 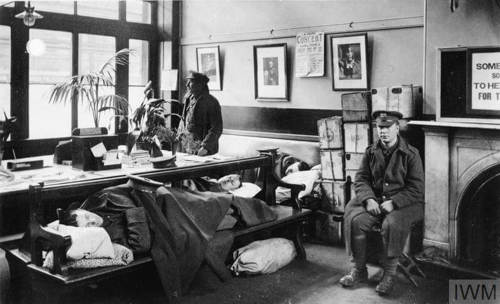 Historical image: Soldiers resting inside the Preston Soldiers and Sailors Buffet, April 1917. The buffet was run by local women in the railway station and provided refreshment and a place to rest for servicemen passing through Preston. © IWM Q 108253

There were four hospitals in Preston which cared for wounded soldiers during the war– Preston Royal Infirmary, Mount Street Hospital, Fulwood Military Hospital and Moor Park Military Hospital. Moor Park Military Hospital was opened in January 1915, repurposing the wooden pavilion in Moor Park used by the Royal Lancashire Agricultural Society for their annual shows and could accommodate 35 patients. In 1918, further buildings and wards were added to the existing hospital in order to house more patients and equipment. The hospital was run by members of the Voluntary Aid Detachment (V.A.D.) a nursing unit founded by the British Red Cross and the Order of St John. Mount Street Hospital offered its beds to wounded and sick Belgian soldiers and the Mother Superior was awarded the Medaille De la Reine Elisabeth (Queen Elizabeth Medal) for her work in caring for the wounded. She was among several volunteers in Preston at the time who were recognised by the King of the Belgians for assisting Belgian refugees and wounded Belgian soldiers. The sole Belgian war grave in Preston (New Hall Lane) Cemetery is of a Belgian soldier – Edouard Octave Van de Velde – who died on 4 June 1918.

The cemetery is the final resting place of Private William Young of the East Lancashire Regiment, who was the only recipient of the Victoria Cross to die and to be buried in Britain during the First World War while the war was still being fought. William was born in 1876 in Maryhill, Glasgow, Scotland. He joined the Army as soon as he was old enough and served his first term of enlistment. By the time that the war broke out, William had settled in Preston with his family and was working at the Gas Works. In September 1914, having been recalled to the Army, William embarked for France. He was wounded in November and then gassed during the following spring which affected his eyesight. Having spent most of 1915 recovering, William was able to return to duty and it was on 22 December 1915 whilst serving with the 8th Battalion of the East Lancashire Regiment, near Foncquevillers, France, that he performed the actions for which he was awarded the Victoria Cross. His citation published in the London Gazette on 28 March 1916, records the following:

’For most conspicuous bravery. On seeing that his Serjeant had been wounded he left his trench to attend to him under very heavy fire. The wounded Non-Commissioned Officer requested Private Young to get under cover, but he refused, and was almost immediately very seriously wounded by having both jaws shattered. Notwithstanding his terrible injuries, Private Young continued endeavouring to effect the rescue upon which he had set his mind, and eventually succeeded with the aid of another soldier. He then went unaided to the dressing station where it was discovered that he had also been wounded by a rifle bullet in the chest. The great fortitude, determination, courage, and devotion to duty displayed by this soldier could hardly be surpassed.’

William spent the next four months recovering from his wounds in hospital, but he was well enough to attend a civic reception held in his honour at the Town Hall in Preston in April 1916. Sadly, on 27 August 1916, William died while undergoing an operation at Cambridge Military Hospital. He was buried in Preston (New Hall Lane) Cemetery and given a civic funeral with full military honours.  Thousands of people lined the streets as his funeral procession passed through Preston. 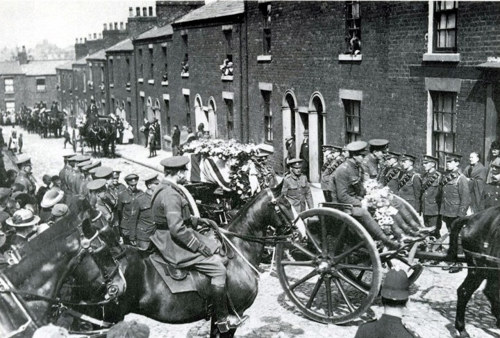 The funeral procession of Private William Young VC passes through the streets of Preston, 1916.

During the Second World War, major towns and cities as well as ports and industrial areas throughout Britain were targeted by the German Luftwaffe during a period of extensive bombing raids between September 1940 and May 1941 known as “the Blitz”. As well as causing extensive damage and destruction, these bombing raids killed around 32,000 civilians and seriously injured 87,000 others. Despite the presence of heavy industry in Preston such as aircraft production at English Electric, the town itself only suffered a few air raids with no fatalities. 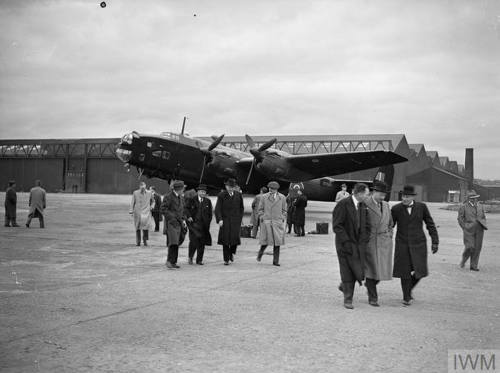 Historical image: American aircraft production representatives during a tour of the English Electric factory at Preston in the autumn of 1942. The aircraft in the background, Halifax II DT 567, was destined to be lost on a mine-laying sortie while operating with No 51 Squadron on 8 March 1943. © IWM E(MOS) 933

Many of the Second World War graves are of soldiers who enlisted in local regiments such as the Loyal North Lancashire Regiment, the East Lancashire Regiment and the Lancashire Fusiliers. There are also a number of graves of members of the Royal Artillery, including six members of the 62nd Searchlight Regiment, which was based at the Drill Hall on Stanley Street in Preston. During the war, it was assigned on anti-aircraft duties around the United Kingdom.

Some of those buried here died after the war ended from causes attributed to their service, as in the case of Aircraftwoman 1st Class Winifred Jackson of the Women’s Auxiliary Air Force. Winifred was healthy when she joined the W.A.A.F. in July 1942, however, by December 1944 she had developed a bad cough and requested a medical examination. She was taken to hospital in Plymouth, and later transferred to The Chestnuts Sanatorium in Ribbleton, Preston, where her condition worsened. Winifred died on 26 September 1946 and it was determined that her death was caused by pulmonary tuberculosis aggravated by war service. She was 22 years old. The personal inscription on her headstone chosen by her parents William and Elizabeth reads: SO YOUNG TO DIE AND YET SO BRAVE FOR GOD AND COUNTRY HER LIFE SHE GAVE

Preston (New Hall Lane) Cemetery is operated by Preston City Council. Before visiting we recommend you consult the website of the site authority.