The city of Brighton was an important medical centre throughout the First World War, with ambulance trains bringing thousands of wounded and sick soldiers for care in the hospitals established in the city. Famously, Brighton became the centre of Indian army medical care in the United Kingdom and over 4,300 Indian soldiers were cared for in the Brighton Pavilion and other converted buildings throughout the city. During the Second World War Brighton was regularly subjected to air raids, and because of the threat of invasion 30,000 local residents were evacuated, however throughout the war the Royal County Hospital in Brighton continued to care for sick and wounded service personnel.

The war cemetery, now known locally as Brighton City Cemetery was opened in 1857. Many of the service personnel buried here were laid to rest by their families and today you will find 274 Commonwealth servicemen of the First World War here, most in the war plot near the entrance, and one service woman of the Women’s Royal Air Force nearby. Further up the hill lies another war plot with a second Cross of Sacrifice marking the group of Second World War graves, which includes two members of the Women’s Auxiliary Air Force. There are also 40 Foreign National war burials here and 4 non-war service burials as well as a Chelsea Pensioners’ Section in the cemetery.

During the First World War, ambulance trains of the London, Brighton and South Coast Railway carried some 30,000 patients to Brighton to be cared for in one of the city’s military hospitals. Throughout the United Kingdom, hospital capacity had to be greatly expanded as the armed forces swelled with volunteers, contingents from the Empire arrived, and thousands of men went to serve on the Western Front. In Brighton, existing hospitals like the Royal Sussex County Hospital and the specialist eye hospital dedicated beds for servicemen, but most accommodation would be in requisitioned and adapted buildings. 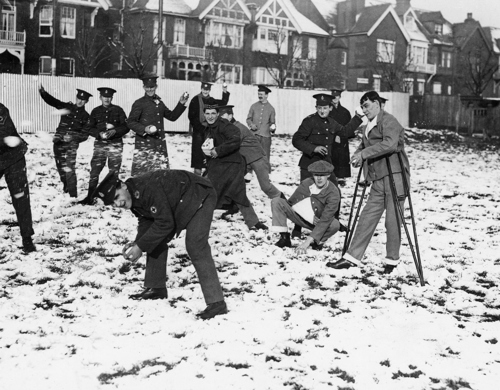 Wounded British soldiers have a snowball fight in the snow at the Second Eastern General Hospital in Brighton. © IWM Q53562

The army’s 2nd Eastern General Hospital occupied several premises including a boys’ grammar school, a workhouse infirmary in Elm Grove became the Kitchener Indian General Hospital, and the Royal Pavilion, the Corn Exchange, and the Dome were converted into facilities with wards, treatment rooms and operating theatres. 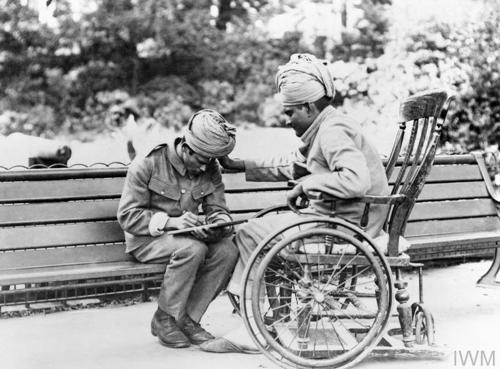 In October 1914, the first units of the Indian Army arrived in France, and Brighton soon became the centre of Indian army medical care in the United Kingdom. Over 4,300 Indian patients were admitted to the facilities on the Pavilion estate alone between 1 December 1914 and 15 February 1916. Most recovered to return to their units; those who died were buried or cremated in accordance with their faith. A site on the downs above the city and the sea was chosen for cremations, and the Patcham Down Indian Forces Cremation Memorial commemorates the 53 Hindu and Sikh servicemen. The Chattri Memorial, which was erected privately in 1921, is nearby. 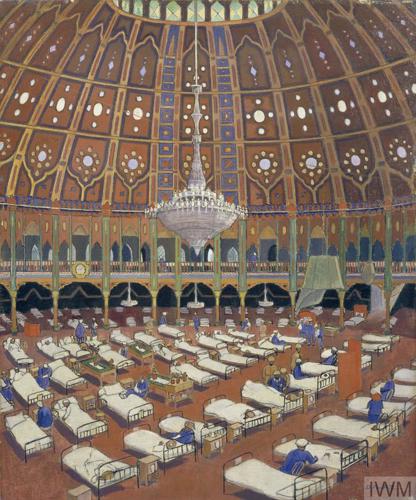 After the majority of the Indian Army departed for other theatres of war, the Royal Pavilion facilities were renamed the Pavilion General Hospital for Limbless Soldiers, and Kitchener Indian became Kitchener Military Hospital. A reminder of Brighton’s proximity to continental Europe came in June 1916 when guns firing as a prelude to the Battle of the Somme could be heard on the Brighton College playing fields during a cricket match.

The large and small hospitals of Brighton, including one of the first specialist units for ‘war neuroses,’ cared for thousands of men from all corners of the Empire. The Kitchener Military Hospital became for a time No. 3 Australian General Hospital, and later in the war, No.10 Canadian General Hospital, until September 1919. Some 53 members of Australian and Canadian units were laid to rest in this cemetery during the war.

Among the stories of the individuals buried in the cemetery, one of the most compelling is that of Captain Coutart-de-Butts Taylor. Taylor was removed from his commission for a misdemeanour in August 1916 before re-enlisting as a private soldier under the alias Charles Edward Collins. He was wounded whilst assaulting a German machine gun position on 4 November 1918 and was awarded a Military Medal for his bravery. He was medically evacuated to England but succumbed to his injuries and associated illnesses and died on 24 December 1918.

Located on the south coast along the English Channel, Brighton became a key target for German Luftwaffe raids during the Second World War and was attacked on 56 recorded occasions between July 1940 and February 1944. One raid in particular in 1943 caused 24 fatalities with several other civilians injured as well as 50 homes made uninhabitable and the Black Rock Gasworks set ablaze. Brighton was also attacked by V-1 flying bombs in 1944.

There were concerns that Brighton was vulnerable from a seaborne invasion force so the beaches were closed off and mined and guarded with barbed wire. Both the Palace Pier and West Pier had sections of their decking removed to prevent their usage as landing stages. The town was declared no longer to be a "safe area" and 30,000 people were evacuated.

The Royal County Hospital in Brighton cared for men wounded and evacuated from the fighting in France and Belgium during the war and those men who did not recover from their wounds and subsequently died were buried in Brighton (Bear Road) Cemetery. One such individual was Warrant Officer Class II George Gristock, a Victoria Cross recipient who was severely wounded in both legs whilst attacking an enemy machine gun near the River Escaut, south of Tournai, Belgium on 21 May 1940. Although Gristock was successful in putting the machine gun out of action, he never recovered from his wounds and died on 16 June 1940. He is buried in Section Z.G.L. Grave 28.

Known locally as Brighton City Cemetery, access is from the Bear Road and there is parking on site.

Before visiting we recommend you visit: