With over 5,000 service personnel commemorated, Brookwood is the largest CWGC cemetery in Britain. You can find the graves of men and women from across the Commonwealth, as well as French, Czechoslovak, Italian, Belgian, Polish and American war graves.

With over 5,000 Commonwealth and almost 800 war graves of other nationalities, Brookwood Military Cemetery is the largest CWGC war cemetery in the United Kingdom. The military cemetery was established as the First World War drew to a close and then extended for the burial of Second World War service personnel. This site shares many of its architectural and horticultural features with CWGC sites elsewhere, in particular those familiar from our war cemeteries in France and Belgium.

By the mid-1800, the rapid expansion of London had led to insufficient space to bury those who died. A series of cholera outbreaks in the city brought the problem to a crisis point. The decision was taken in the 1850s to create a cemetery large enough to accommodate all of London’s dead for the foreseeable future. More than 2,000 acres of land was acquired, and Brookwood Cemetery was begun. Since then more than 240,000 people have been buried in Brookwood Cemetery.

Brookwood Military Cemetery was established in 1917, and was then extended for the burial of Second World War service personnel. 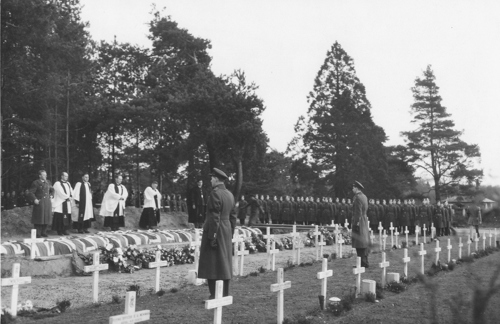 Today, with over 5,000 Commonwealth and almost 800 war graves of other nationalities, Brookwood Military Cemetery is the largest Commonwealth War Graves Commission (CWGC) cemetery in the United Kingdom.

Brookwood shares many of its architectural and horticultural features with CWGC sites elsewhere, particularly in the former battlefields of France and Belgium. They include the Cross of Sacrifice, designed by Sir Reginald Blomfield, and the Stone of Remembrance, designed by Sir Edwin Lutyens.

Those buried or commemorated here represent all branches of service and all six of the CWGC’s member governments:  Australia, Canada, India, New Zealand, South Africa and the United Kingdom. There are also plots of Belgian, Czechoslovakian, French, German, Italian, and Polish war graves. 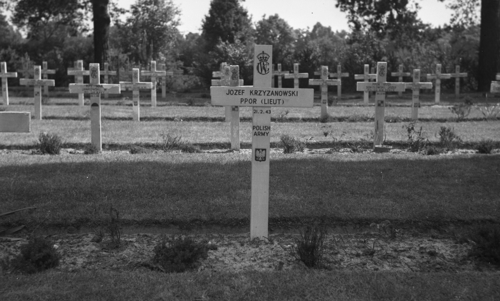 There are also over 2,400 Canadian war graves dating from the Second World War. The Canadian Records Building, built by Royal Canadian Engineers as a gift from the Canadian government, stands at the main entrance.

Two memorials commemorate Commonwealth service personnel who died during the world wars and have no known grave. The Brookwood 1914-1918 Memorial records the names of over 260 who died in the United Kingdom during the First World War but whose graves could not be found. The Brookwood 1939-1945 Memorial commemorates more than 3,400 men and women of Commonwealth land forces who died at sea, in raids on occupied Europe, or while on service outside the main theatres of war. Among those honoured on this memorial are special agents who lost their lives while operating in enemy territory. 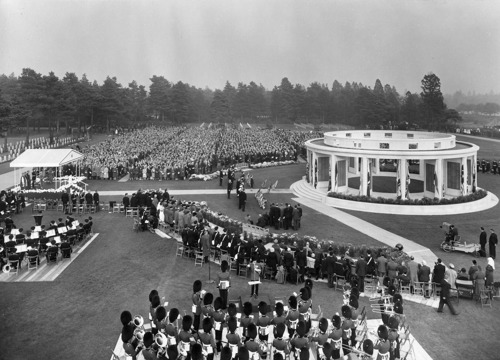 Within the cemetery is Brookwood American Cemetery and Memorial. This area is maintained by the American Battle Monuments Commission.  468 American servicemen of the First World War lie at rest in the cemetery and a further 563 are commemorated by name in the memorial chapel. 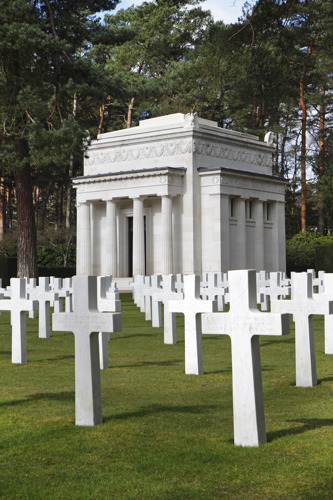 Brookwood Military Cemetery is the largest, and arguably the most well-known, CWGC cemetery in the UK. What is perhaps less well known is the important role Brookwood played in establishing the CWGC’s work in the UK.

In 1916 the Governments of the Dominions instructed their Military Administrative Headquarters in London to stop the practice of burying their soldiers in common graves in the London area, and as a result land was acquired at Brookwood. The Dominions selected adjoining plots and arranged for Dominion soldiers dying in hospitals within 25 miles of Trafalgar Square to be sent for burial in Brookwood.

On the 11th July 1917, an agreement was made between the London Necropolis Company and the Chief Engineer of the London District, for British soldiers dying in the London area to also be buried at Brookwood, and ground adjoining the Dominion plots was chosen.

When the CWGC was created, also in 1917, it was originally only concerned with the marking and maintenance of war graves overseas – it had no responsibility, or funding, for war graves in the United Kingdom. Brookwood Military Cemetery was to change all that, as this extract from the minutes of the 3rd Commission Meeting from July 1918 show. 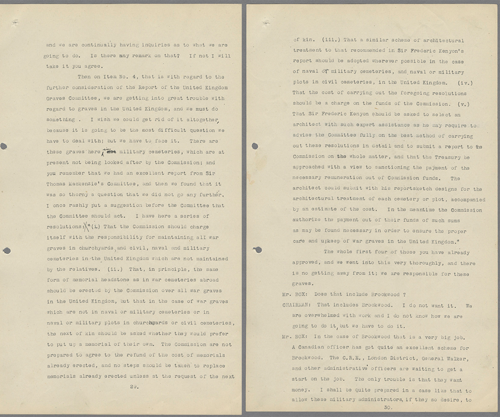 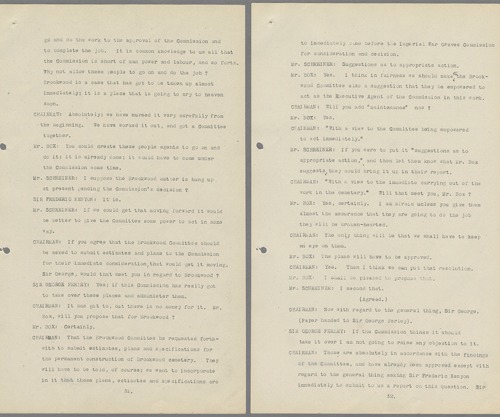 At the meeting, it was reported that the Brookwood Cemetery Committee had recommended that uniform headstones should be used to mark the graves of all soldiers buried in the cemetery. As a result of this decision, the Commission decided to appoint a second Committee to consider the question of the marking of war graves in the UK as a whole – Rudyard Kipling being appointed as one of the Commissioners.

A little under a year later this Committee reported back its findings, recommending that the Commission take on the responsibility for war graves in the UK, including Brookwood. Despite misgivings from the Commission Vice Chairman, Fabian Ware, who stated in reference to Brookwood:

“I do not want it. We are overwhelmed with work and I do not know how we are going to do it, but we have to do it”

At the very same meeting, approval was given for the submission of plans and estimates for the permanent construction of Brookwood Military Cemetery. These extracts from the verbatim minutes of the 12th Commission Meeting held on 20th May 1919 provide an insight into this decision.

While it is often said that all roads lead to Rome, in this case all CWGC cemeteries in the UK lead to Brookwood.

While Brookwood Military Cemetery is located in land which was once part of Brookwood Cemetery, it does itself also contain a separate cemetery. Brookwood American Cemetery, located in the cemetery grounds, contains the graves of 468 American service personnel, and is maintained by the American Battle Monuments Commission.

However, while all the casualties buried in the cemetery are American, one is also a Commonwealth war grave. Second Lieutenant Wayne Hart Moore, from Hot Springs, Arkansas, was serving in the Royal Air Force at the time of his death in February 1919. Originally buried in Lincoln (Newport) Cemetery, in 1923 his mother wrote to the Commission to ask whether her sons remains could be exhumed and moved to lie in the American cemetery in Brookwood.

In a further letter to the Commission Mrs Moore wrote: 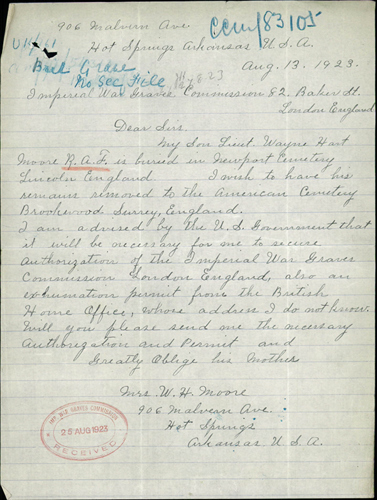 “Mr Moore and I are getting up in years...after thinking the matter over I believe when my time comes to go, I will be better satisfied if I know my son is buried in Brookwood Cemetery. I know some of his friends will find him there.”

While a somewhat unusual case, it was decided that there was no reason why the Commission could not allow this request, and 2nd Lt. Moore’s body was exhumed and reburied in Brookwood in October 1924, where his grave is marked by a standard American headstone in keeping with the rest of the cemetery.

The full file of correspondence about the case can be found on or archive catalogue here.

Brookwood Military Cemetery is notable for the number of different plots, features and memorials incorporated into its layout and design. These photographs, all taken in 1926, show the First World War Canadian, South African, and New Zealand plots in the cemetery.

The final image in this sequence, showing the main area of the cemetery as it existed prior to the Second World War, appears to have been taken through the window of a train, hence the reflections in the image.

Trains played a prominent role in the story of the cemetery, since funeral parties and coffins would be sent down the London Necropolis train line from Waterloo to Brookwood (the civilian cemetery actually at one point contained two stations in the its grounds). During the First and Second World War many of those buried in the cemetery made their final journey on such trains.

In addition to the various Commonwealth plots, the cemetery also contains separate plots for Italian, French, Czechoslovakian, Polish, Belgian soldiers, and a large number of German graves, each marked by distinctive shaped headstones. 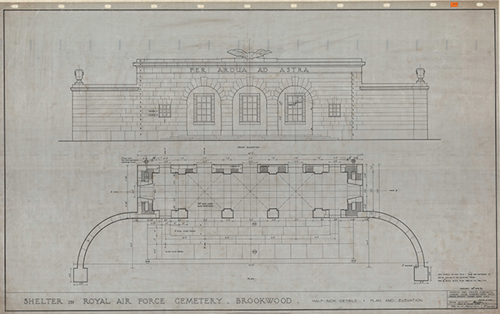 The cemetery that exists today has been shaped by many hands, from the gardeners who daily care for the graves, to the architects who have planned and designed its features, many of which it shares with CWGC sites around the world. These include the Cross of Sacrifice (designed by Sir Reginald Blomfield), and the Stone of Remembrance (designed by Sir Edwin Lutyens). However, unlike other cemeteries, Brookwood has two of each of these features, one set in the First World section, the other in the Second World War plots. 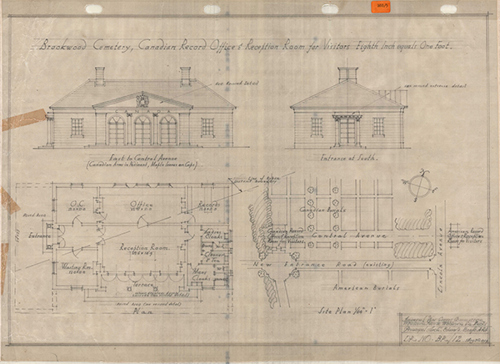 The Second World War resulted in a large expansion to the cemetery, and ultimately the creation of new sections, features and memorials. These included the RAF plot and shelter building, and the Canadian Records building, both designed by Sir Edward Maufe, the Brookwood 1939-45 Memorial, designed by Ralph Hobday, and other smaller memorials which can be found in the national plots (such as the Czechoslovak Memorial designed by Jaroslav Kumprecht and Karel Lodr). 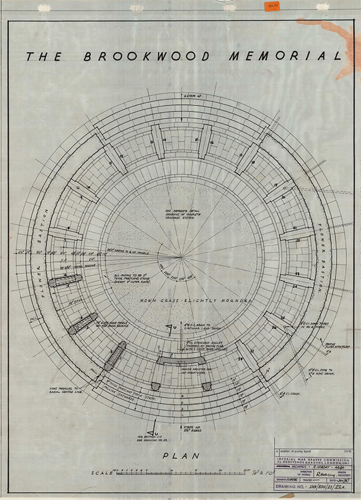 On 4th November 2015 a new memorial was unveiled here. The Brookwood 1914-1918 Memorial, designed by architect Barry Edwards, commemorates servicemen and women from the land forces of the United Kingdom, the majority of whom died in the care of their families. They were not commemorated by the Commission at the time but, through the efforts of relatives and research groups, these casualties have since been found. The design of the memorial allows for additional names to be added as it is likely that further research may uncover other overlooked individuals. 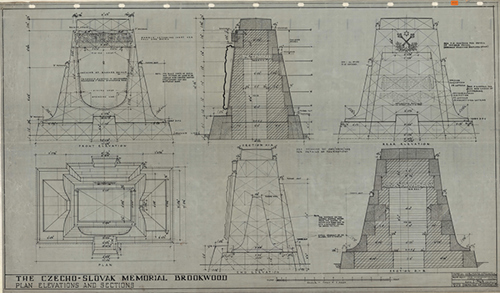 This series of photographs, taken during the Second World War, show the burial service for 19 of the passengers and crew of a RAF Dakota transport aircraft which crashed in poor visibility on the South Downs on the 6th February 1945. In total, 23 British and Commonwealth airmen were killed in the crash, and 21 of them are buried in Brookwood Military Cemetery.

This is just one of several examples of communal graves at Brookwood, used for the burial of casualties when individual identification of remains was not possible, as can particularly be the case in aircraft crashes.

Just as the Second World War saw an increase in the number of servicemen and women buried or commemorated in the cemetery, the war also had an impact on the Commission staff tending the graves. As burials increased, the maintenance required to look after the cemetery grew proportionally. However, due to circumstances created by the war, the Commission had a pool of gardeners available to carry out the additional work needed.

Staff cards in the CWGC archive collection show that a number of Commission gardeners who had previously worked overseas in France, Belgium and Germany, had, following their evacuation from mainland Europe, been reassigned for duty at Brookwood. 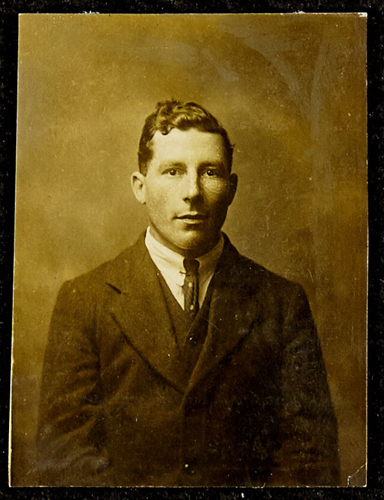 Men like John Edward Haines and Louis Herbert Stonham, who had worked for the Commission from 1920 and 1924 respectively, were evacuated from France in May 1940 and ended up working in Brookwood during and immediately after the Second World War. Once hostilities ended, many returned to their original postings overseas, while others made the move back to the UK permanent. 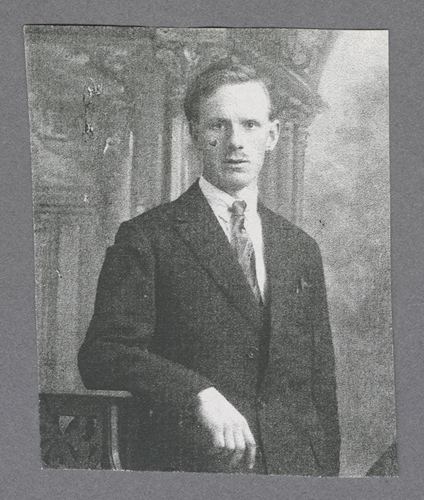 Vehicles, pedestrians and wheelchair access is through the main gate off Dawney Hill Road, Pirbright, during the official opening times. The gates are automated therefore access after 7:30pm can be sought by driving up to the main entrance gate.