This magnificent WAR memorial commemorates more than 20,000 service men and women of the Commonwealth air forces who died during operations from bases in the United Kingdom and North and Western Europe, and who have no known grave.

The Runnymede Air Forces War Memorial stands upon the crest of Coopers Hill overlooking the River Thames and the field of Runnymede - a site steeped in history, where in 1215 King John in the presence of his rebellious barons affixed his seal to the Magna Carta (great charter) of English liberties. A place twice hallowed, once by the spirit of English liberty and once by the shared sacrifice of over 20,000 Commonwealth air force servicemen and women who gave their lives during the Second World War.

Unveiled by Her Majesty, Queen Elizabeth II, on 17 October 1953, the war memorial was designed by Sir Edward Maufe, the Commission's Principal Architect for the United Kingdom after the Second World War. His aim was to create an atmosphere of quiet and intimacy for those visitors who come to remember the missing.

Per ardua ad astra / through adversity to the stars

The Royal Air Force saw some of the earliest action of the Second World War when on 4 September 1939, the day after Britain declared war on Germany, RAF bombers attacked German shipping near Brunsbüttel and Wilhelmshaven. In these raids, seven aircraft were lost and twenty-five airmen killed, the first casualties in what would become a global struggle for mastery of the skies; a contest which would cost the lives of more than 116,000 men and women of the Commonwealth Air Forces. Many have no known grave, having crashed in remote locations, been lost at sea or buried anonymously as an unknown solider or airman under a headstone bearing the inscription: ‘Known unto God’. 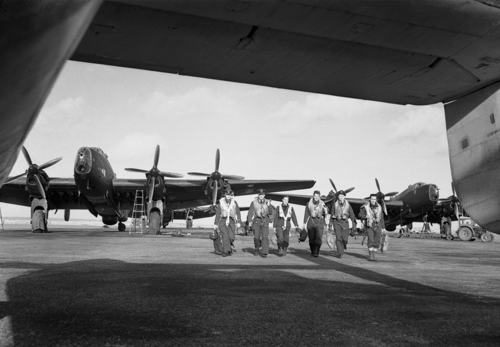 Over 20,000 who were lost in operations over Britain and northern and western Europe are commemorated on the Runnymede Memorial, while those missing of other theatres of war are commemorated on memorials elsewhere in the world, including at Malta, El Alamein and Singapore. The men and women commemorated on Runnymede came from all parts of the Britain, the Commonwealth and beyond, including some from countries in continental Europe which had been overrun but whose airmen continued to fight in the ranks of the Royal Air Force.

They fought to keep the skies above Britain free from German menace, hunted for U-boats in the North Sea and Atlantic, supported the land forces and took the fight to the enemy on bombing raids over Axis territory. Others transported men and material to-and-fro, or ferried aircraft from factory to the airfield.

Down below, ground crew worked day and night repairing, re-arming and refuelling aircraft ready for the next mission. Flying was hazardous, but the process of learning to fly even more so, and a great number were killed in routine flights far away from the combat zones due to poor weather, faulty equipment or pilot error. 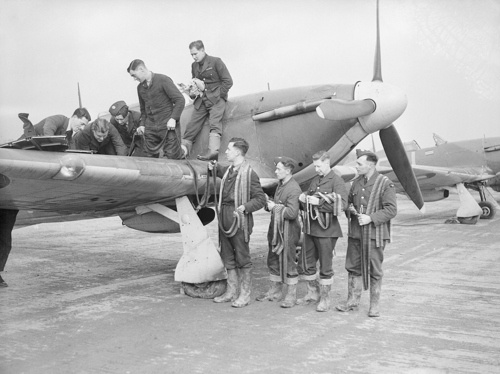 They are all honoured and remembered, their names carved in stone around the cloister walls of this memorial. Unveiled by Her Majesty, Queen Elizabeth II, on 17 October 1953, the memorial was designed by Sir Edward Maufe, the Commission's Principal Architect for the United Kingdom after the Second World War. His aim was to create an atmosphere of quiet and intimacy for those visitors who come to remember the missing. 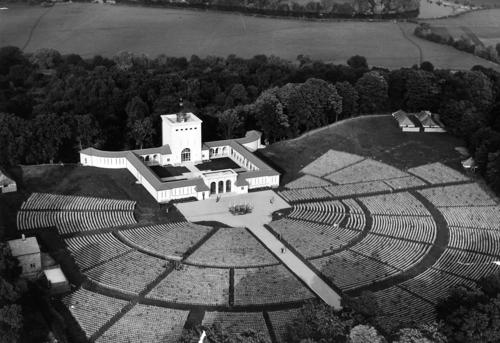 The names, grouped according to the year of death, are inscribed on the stone reveals and mullions of the narrow windows giving the impression of partly opened stone books. Above, richly decorated painted ceilings – newly restored in 2020 -- depict the coats of arms of the Commonwealth countries. 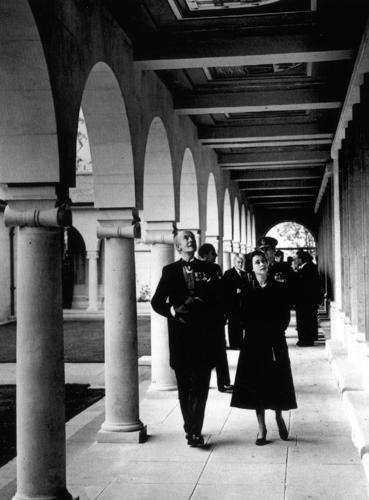 From the north end rises a tower, evocative of an airfield control tower, the top of which offers spectacular views out across the Thames Valley towards Windsor Castle, Heathrow and London. The tower exterior has three stone figures representing Justice, Victory and Courage. Inside the tower is a shrine or chapel, a place of quiet reflection. Engraved on the great north window of the shrine are words from the 139th Psalm, sometimes called the Airman's Psalm:

If I climb up into Heaven, Thou art there;

If I go to Hell, Thou art there also.

If I take the wings of the morning

And remain in the uttermost parts of the sea,

Even there also shall Thy hand lead me;

And Thy right hand shall hold me.

Above the main entrance are words painted sky blue. RAF veterans known the motto well, but for everyone else it is worth contemplating their meaning, they read Per Ardua ad Astra: ‘through adversity to the stars’.

This memorial overlooks the River Thames on Cooper's Hill at Englefield Green between Windsor and Egham on the A308, 4 miles from Windsor. Follow signs for the Air Forces Memorial. The memorial is open daily between 9:00am-16:00pm.