Located near Salisbury Plain, a key place for army training from the late 1800s, during the First World War Sutton Veny and the surrounding area housed several large military camps and the churchyard was used for the burial of over 160 service personnel, the majority of whom served with Australian forces.

In 1865 a local landowner died, and his family decided to remember him by paying for an urgently needed new parish church for Sutton Veny: St John the Evangelist. Its churchyard is the final resting place of 168 servicemen and women of Commonwealth forces of the First World War. All but two of their graves form a beautiful war graves plot on the east side of the church. More than 140 of those buried at this war cemetery were Australian army personnel, including two nurses.

The nearby Salisbury Plain had been a key place for army training from the late 1800s, and during the First World War Sutton Veny and the surrounding area housed several large military camps. Tents and wooden huts were established on sites to the north and west of the village, eventually accommodating several thousand men while they trained on Salisbury Plain, and a hospital facility of around 1,200 beds treated the sick and wounded. The local community was transformed; villagers ran laundry services and tuck shops, and local pubs became well-frequented by soldiers. 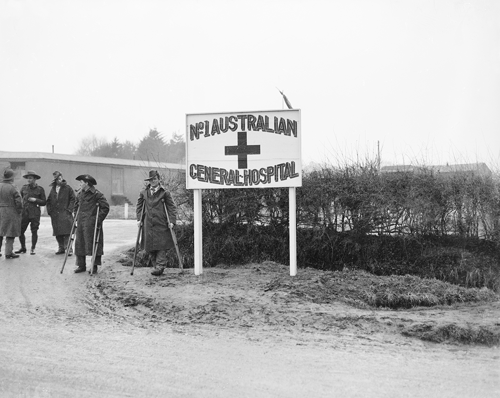 In 1916, Sutton Veny became the home of No. 1 Australian Command, which was established here until after the end of the war. Australian service personnel had been deployed to the Western Front earlier in the year, after seeing action in the Middle East and Gallipoli in 1915, where ‘Anzac’ troops from Australia and New Zealand played a key role. The area around Sutton Veny and Codford soon became one of the most important Australian bases in the country. A YMCA centre was established in Greenhill House (now Sutton Veny House), where peaceful lawns and gardens helped men convalesce. The outline of the Australian Imperial Force cap badge was carved by these soldiers into the hillside at nearby Lamb Down.

After the Armistice, thousands of Australians remained in the area awaiting discharge and passage home. Many of the Australians laid to rest here, including Matron Jean Miles Walker of Tasmania and Sydney, were victims of the influenza pandemic which reached Britain in late 1918, killing around 250,000 in Britain alone. The Australians had left Sutton Veny by early 1920, but the connection between the village and Australia remains strong. Part of the church is dedicated as the Anzac Chapel, and a service is held every year to remember the servicemen and women laid to rest here. 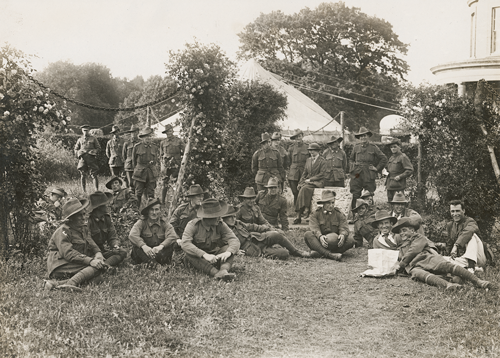 German prisoners of war were interned nearby from 1916-1919, and during that time 38 were buried here, alongside the Commonwealth soldiers. Around 1963, they were moved to another CWGC site, Cannock Chase German Military Cemetery, to join over 4,000 of their comrades.

Twenty-three years after the last service burial at Sutton Veny, one more grave would be added to the plot. On a Saturday night in July 1942, two army vehicles crashed head-on at Knook, three miles from this site. Private Violet Morgan from Cardiff, serving in the Auxiliary Territorial Service in this area, was riding back from a dance in one of the vehicles. She was laid to rest here next to Private Arthur Parkes of New South Wales, Australia, who had died in February 1919. Her headstone has no personal inscription – perhaps her parents could not find words in the wake of the loss of their 19-year old daughter.

Parking is available on the road outside the church. The majority of CWGC graves can be found on the far side of the church from the road. Before you visit we recommend you visit