Today Cannock Chase War Cemetery is a tranquil place of quiet reflection but during the First World War the Chase was home to bustling military camps, hospitals, training areas and even had its own railway known as the ‘Tackeroo Express’. The CWGC’s WAR cemetery here is dwarfed by the vast German Military Cemetery nearby where over 5,000 German servicemen of both wars who died in Britain are buried.

During the First World War there was a large military camp at Cannock Chase which became the base for the New Zealand Rifle Brigade. There was also a prisoner-of-war hospital with 1,000 beds, and both camp and hospital used this burial ground.

Today Cannock Chase War Cemetery contains 100 Commonwealth war burials, most of them New Zealanders of the First World War, and some 280 German burials.

The British Army saw rapid expansion following the outbreak of war in 1914, as recruits flooded to recruitment offices wishing to do their bit, overwhelming the army’s peacetime facilities. Training camps were hastily established around the country, including at Brocton and Rugeley on the Chase, on land made available by the Earl of Lichfield. Housing up to 40,000 men at any one time, the camps were used first as transit camps for trained soldiers heading to the Western Front. Cannock Chase subsequently became a training facility for various Commonwealth units, and as many as 500,000 troops were trained here over the course of the First World War. Among these were the officers and men of the New Zealand Rifle Brigade, who, because of their experience (particularly in taking the village of Messines in Belgium in June 1917), were transferred to Cannock Chase to train recruits in trench warfare. 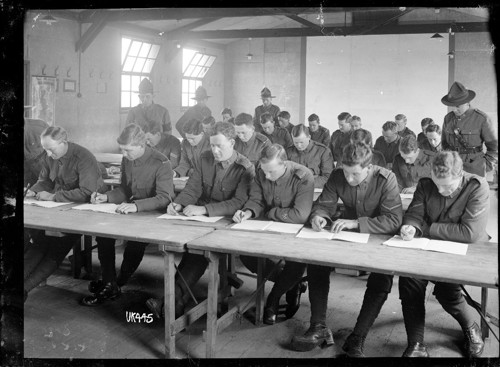 In 1916, a military hospital was established close by at Brindley Heath. It had 12 wards, with a total of 1,000 beds, and served the local camps as well as housing convalescing soldiers from the Western Front. Cannock Chase War Cemetery was begun in 1917 for those who died while being treated in the hospital and contains 97 Commonwealth burials of the First World War. The majority are New Zealand servicemen, many of whom died in the influenza pandemic, known as ‘Spanish Flu,’ which broke out towards the end of the First World War.

In April 1917, part of the camp at Brocton was turned into a prisoner of war camp and hospital for captured German soldiers, and so the cemetery began to be used also for German burials. Some 286 German servicemen of both World Wars are buried within the cemetery.

During the Second World War, the Chase was again used for military purposes, housing an Royal Air Force (RAF) base and Home guard grenade range; there are three RAF servicemen of the Second World War buried in the cemetery. The Chase continued to be used by the military after the war, until it was declared an Area of Outstanding Natural Beauty in 1958. 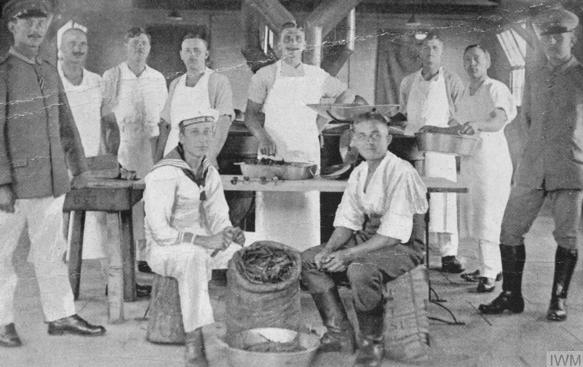 A short walk from Cannock Chase War Cemetery lies Cannock Chase German Military Cemetery, which contains the graves of nearly 5,000 German and Austrian servicemen and civilians of the two world wars. In 1959, an agreement was concluded between the governments of the United Kingdom and the Federal Republic of Germany, concerning the future care of German war graves in the United Kingdom; all graves not situated in cemeteries and plots of Commonwealth war graves maintained by the CWGC were transferred to a new central cemetery established at Cannock Chase. The inauguration and dedication of this cemetery took place in 1967. In the centre of the Hall of Honour, resting on a large block of stone, is a bronze sculpture of a fallen warrior, the work of the eminent German sculptor, Professor Hans Wimmer.

Cannock Chase War Cemetery was begun in 1917 when it was used by the British military authorities to bury British and New Zealand soldiers, the majority of whom had died while being treated at the military hospital which had been established close by at Brindley Heath. Around the same time, a German Prisoner of War camp was set up in nearby Brocton, and the cemetery was also used for German burials. The land itself, forming a part of a large expanse of moorland, had been given to the military authorities by Lord Lichfield, for the express purpose of setting up a cemetery.

After the war and following the transfer of the cemetery to the Imperial War Graves Commission’s care, plans were put in place for its architectural treatment. 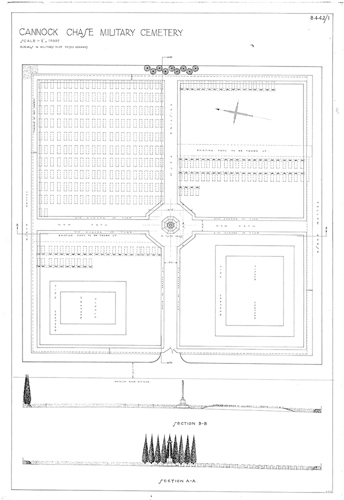 This extract from the 57th IWGC Finance Committee Meeting Minutes shows that the design of the cemetery, which included the construction of paths, the erection of a Cross of Sacrifice, horticultural treatment, and the installation of reinforced concrete beams for the permanent headstones, was a collaboration between Sir Robert Lorimer, the Commission’s Principal Architect for the United Kingdom, Sir Frederic Kenyon, the Commission’s Artistic Adviser, and a Colonel Parsons, the Medical Superintendent of Cannock Chase Pensions Hospital. 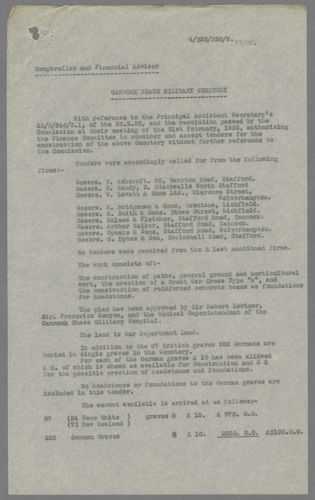 The construction work at the cemetery, including the manufacturing and engraving of the headstones, was undertaken by the local firm of T. Ashcroft, of Marston Road, Stafford. 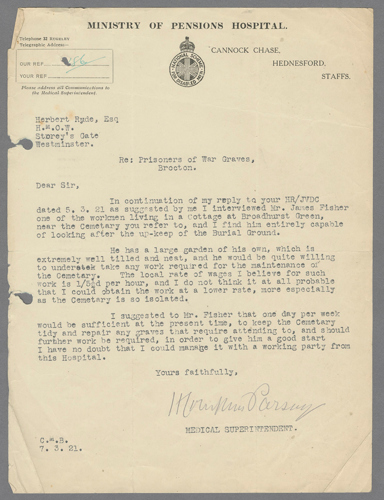 As well as the constructional work required, the cemetery also needed a permanent caretaker. On 2nd May 1921 Mr James Fisher, a retired gamekeeper who lived close to the cemetery, was appointed as the first IWGC caretaker for Cannock Chase. Already in his 60’s when appointed, Mr Fisher remained in his post until his death on 14 February 1934, aged 78. At the time of his death, IWGC Regional Inspector A. Dix wrote “he knew everybody and was generally liked … and was about the oldest authority (in a first-hand sense by practical experience) on Cannock Chase”. He was succeeded as caretaker by his son-in-law Isaiah Davenport, who continued to maintain the cemetery for a further 16 years. 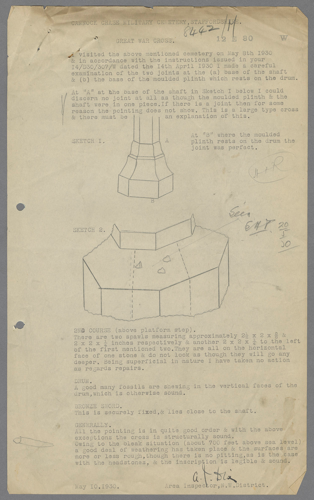 Maintenance of a cemetery is not easy, and the location of Cannock Chase presented its own particular problems. Its location presented difficulties for its horticultural treatment, since only the hardiest plants could survive in its exposed moorland position, while the climatic conditions also affected the headstones and Cross of Sacrifice, resulting in the pitting and other deterioration to the stonework. Other, less obvious, issues included moles burrowing into the soil and damaging the grass and the threat of wildfire to the site due to the nearby heather moorland which necessitated the clearing of the surrounding land to act as a firestop. 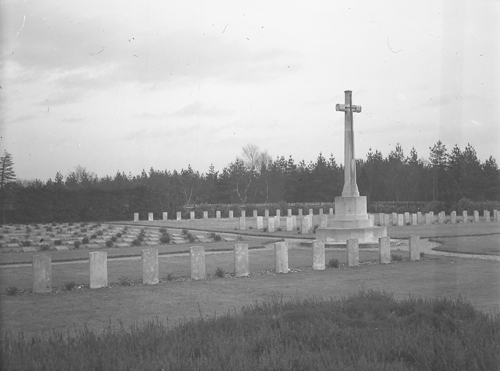 The first image of Cannock Chase War Cemetery was taken in December 1949. It shows the Cross of Sacrifice, with the Commonwealth plot to the right, and the German plot on the left, where the graves are shown marked by flat stone tablets. 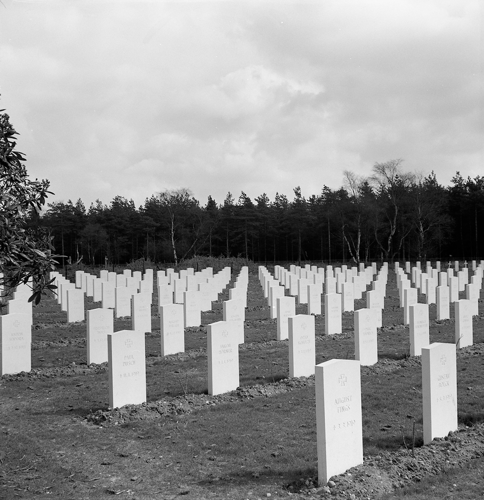 It was only in the 1960’s that these were replaced with the standard German style Commission headstones, which can be seen in this second photograph taken in April 1964 soon after they were erected. 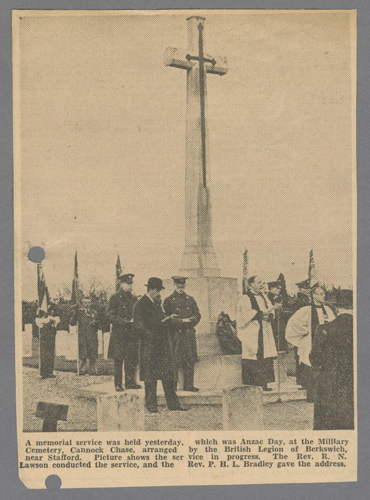 Cannock Chase War Cemetery has remained a place of pilgrimage for visitors over the years. This newspaper cutting of an ANZAC day ceremony held in 1939, is indicative of the hundreds of ceremonies and thousands of individual visits and pilgrimages that have been made to the site over the years. Many of the visitors have been Germans and New Zealanders, as can be seen from this report written by the IWGC Area Inspector of an organised group of German visitors who arrived in 1939, and this letter from a New Zealander who visited the cemetery in 1951. 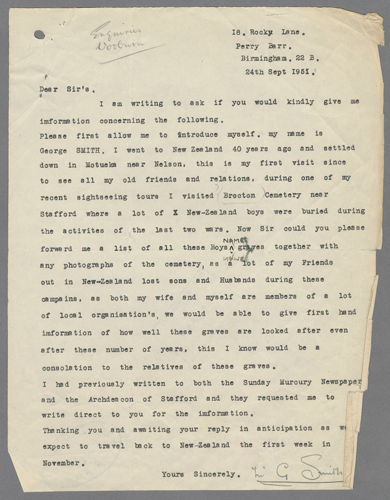 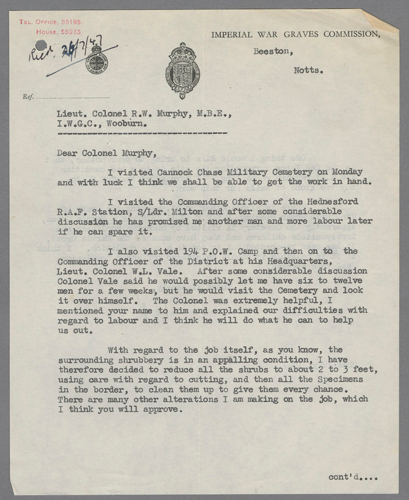 Following the outbreak of the Second World War, Cannock Chase was once again used for military burials, although this time, due to the proximity of an RAF base, all three Second World War Commonwealth casualties buried here served with the RAF. By far the greatest number of Second World War burials in the cemetery are German, including some German air crews who were shot down over the UK, and a number of prisoners of war, many of whom died after the end of hostilities but before they had been repatriated home. In 1947 German Prisoners of War actually worked on the cemetery itself for a short period of time, as these letters from the CWGC archive show. 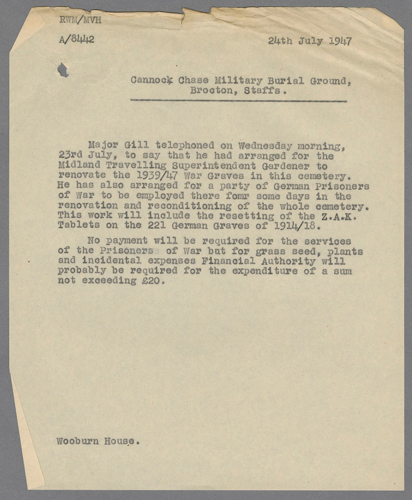 A view of the cemetery, taken by Commission photographer John Kenneth Ash in March 1969. 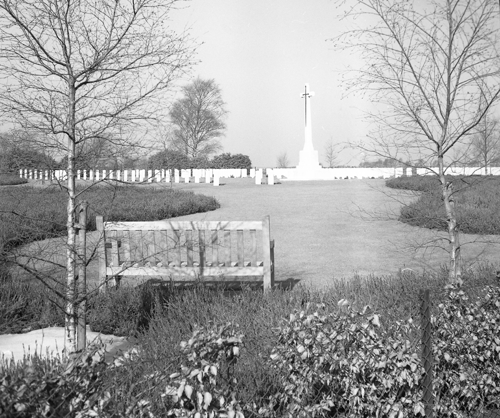 From the M6, exit at Junction 11 and take the A460 towards Cannock town centre. From Cannock town centre take the A34, Cannock to Stafford road. Follow for approximately 3 miles to roundabout, following signs for Rugeley. Turn right after about 1 mile, then left at crossroads. Cannock Chase War Cemetery is signposted from the A34 when travelling from either Cannock or Stafford.

Just after the outbreak of the Second World War, two large areas were set aside in the newly established Blacon Cemetery. By war's end more than 450 service personnel had been laid to rest here