Your guide to our work

When people think of war graves they usually think of the row upon row of headstones in cemeteries across the former battlefields of France and Flanders. But there are in fact a great number of war graves in Great Britain. Over 300,000 servicemen and women are buried or commemorated on a memorial here, more than in any other country except France. 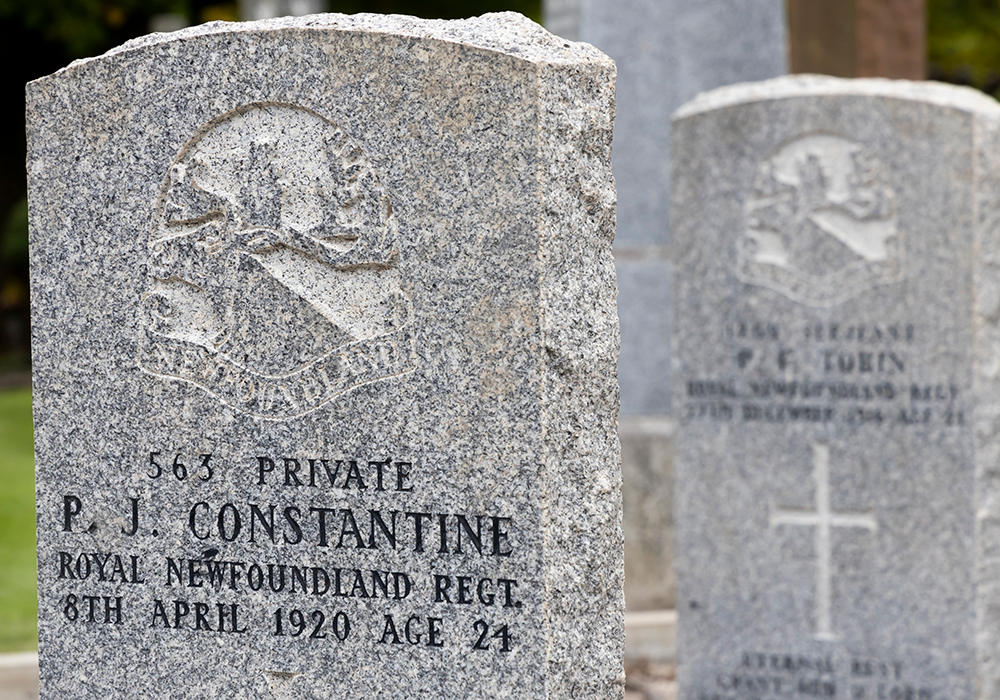 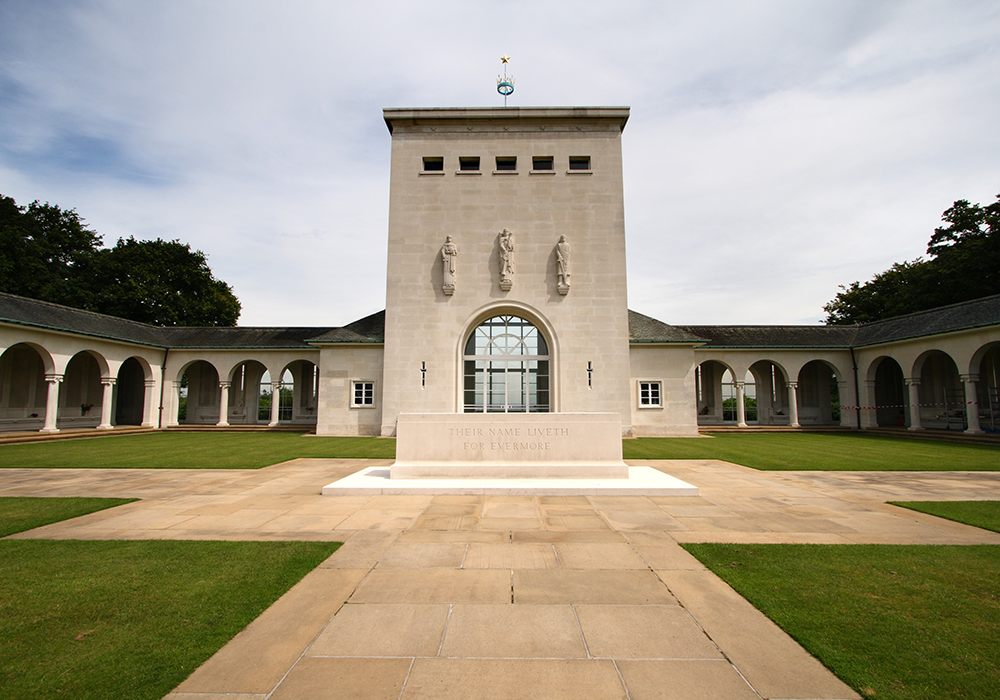 Discover more about our work across Great Britain

During the two world wars Britain became an island fortress and a base for equipping and training troops and launching land, sea and air operations. In both conflicts, the skies above and the surrounding seas became the scene of fierce fighting involving aircraft, submarines and warships.

Britain was also the main centre for the medical care of men and women serving in the armed forces. Thousands of hospitals located across the country were used to treat service personnel who were wounded, fell victim to disease, or were injured in accidents at home or overseas.

Many of the servicemen buried in Great Britain were killed in action in the air while defending the home front. Others drowned in British coastal waters. However, the majority were wounded or contracted disease on active service, were transported back to Britain, and subsequently died while undergoing hospital treatment or recovering in private homes.

The GB-based families of those who died in Britain were able to lay their relative to rest where they wished, unlike men and women who died overseas.

Who is commemorated in Great Britain?

All manner of servicemen and women from the three branches of service - land, sea and air - as well as ancillary units and organisations which supported the war effort, such as the British Red Cross Society. They came from across the Britain and Ireland, the British Empire/Commonwealth and beyond.

Our work in Great Britain 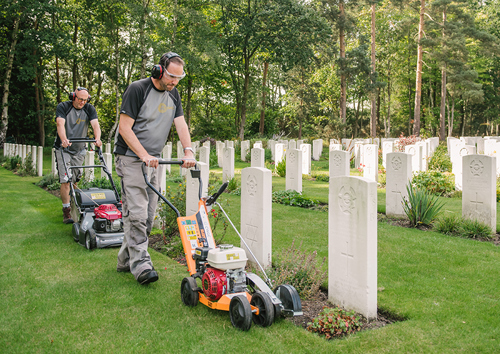 Our Aims in Great Britain 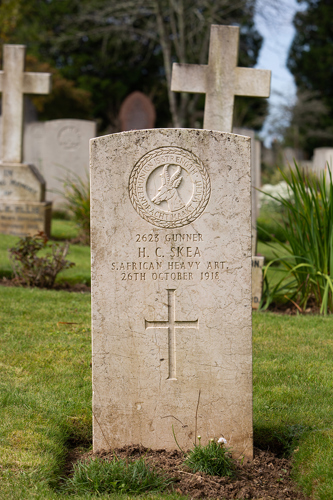 During the world wars, GB-based families of service personnel who died in Britain usually had a say in where and how their loved one was buried. Sometimes this would be left to the military authorities but, in many cases, the family made arrangements for the burial of the loved one and so many are buried in privately owned graves close to where the family lived.

This means that today you can find war graves in virtually every city, town and village in Britain. 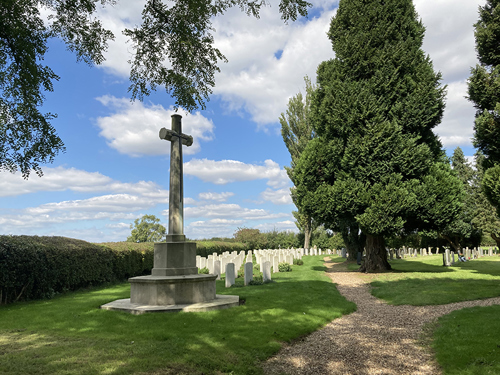 Use our interactive map to see some highlights across Great Britain 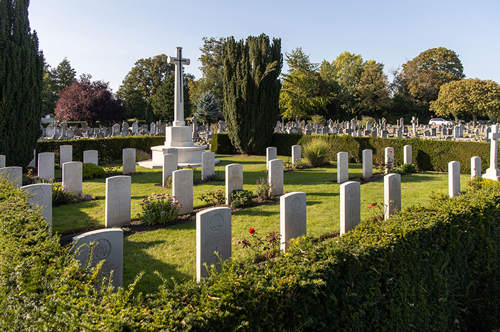 As the scale of both world wars increased, formal war grave plots in cemeteries were set aside for service burials by the local or military authorities. It is often the case that these plots have a distinct character, containing a high proportion of Australian, Canadian, New Zealand or South African servicemen, or air force or naval personnel, usually as a result of them being stationed nearby or their being treated in a nearby hospital. 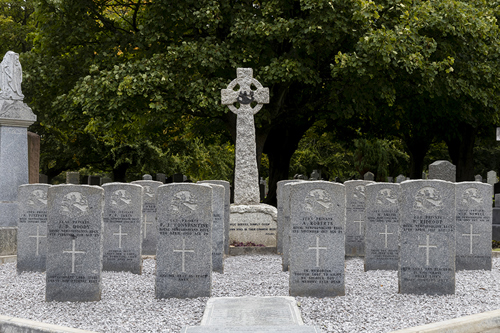 There are over two dozen military, Royal Naval and CWGC war cemeteries in Britain, ranging from Kilchoman Military Cemetery on the Isle of Islay where there are just 31 identified graves, to the vast Brookwood Military Cemetery in Surrey with over 5,000 Commonwealth graves.

Some like Portland Royal Naval Cemetery were begun by the Navy or Army before the First World War, while others such as Hatfield Park War Cemetery were created during the war years.

These cemeteries are often similar to those found in France and Flanders, with a more formal arrangement of graves, cemetery features and horticulture.

Grave markers in Great Britain vary considerably. Many graves bear a standard CWGC headstone, but this is by no means universal.

The familiar white Portland CWGC headstone – the kind frequently seen in France and Belgium, for instance - is widely used in Britain. Each is inscribed with the details of the individual, including name, rank, awards, service number (except officers), and a personal inscription, if one was provided by the family. Pedestal style CWGC markers can also be seen, often in combination with what remains of a private memorial. The CWGC provides different headstone shapes for foreign nationals and non-war graves we mark.

Across GB the type of stone used to make the CWGC headstone differs. While many are of Portland limestone, a number of other kinds are also used including granite and slate. 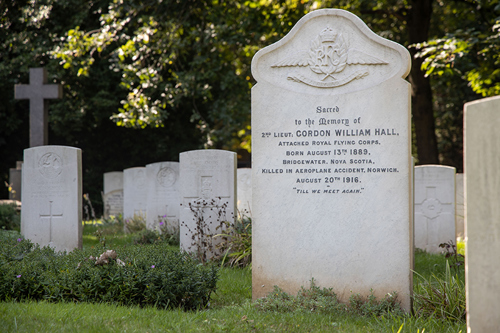 A great many war graves in Britain are not marked by Commission headstones. Instead their graves are marked by headstones and other grave markers arranged by the family, 70-100 years ago. These privately erected stones vary greatly in size, shape, design and condition. They often commemorate more than one member of the family buried beneath.

After both wars, the War Graves Commission endeavoured to contact the relatives of the deceased to offer them a CWGC headstone. This may have been several years after the death, by which time the family had made their own arrangements or did not want the CWGC grave marker.

Today these original markers remain private property and the CWGC does not have the right to remove or replace them if they become worn or damaged without family consent.

If a private marker becomes too degraded, the CWGC seeks permission to add one of our markers to the grave to ensure the war casualty is properly commemorated. Today’s conservation principles support adding a pedestal (or ‘Gallipoli’) marker within the remaining original features. 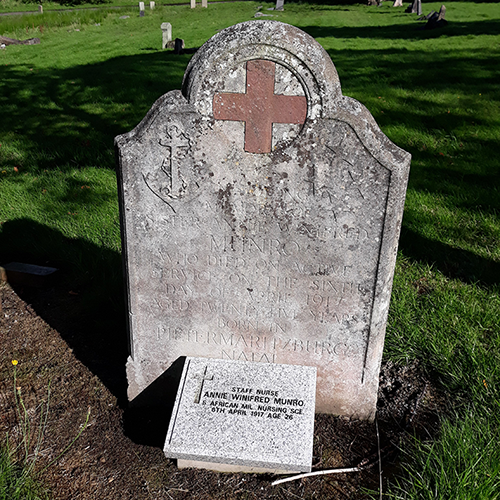 It is not always possible for the CWGC to mark the grave of a serviceman or woman. In the case where a number of graves within a cemetery cannot be marked their names are inscribed upon an alternative commemoration memorial or ‘screen wall’.  These vary in size, form and design: some take the form of an over-sized headstone with multiple individuals named upon it, while others are substantial structures with hundreds of names.

At some sites we care for the graves of servicemen and women of our allies and our former adversaries. Termed ‘foreign nationals’ - service personnel of the forces of non-CWGC member countries – their graves are marked by differently shaped headstones. The design, layout and even type of stone can differ substantially from the standard CWGC Commonwealth headstone.

You will see headstones which look very similar to CWGC Commonwealth headstones but have a slightly different shape created through ‘notches’ cut from the top right and left corners of the headstone, and/or having a distinctive swept curve to the top of the headstone. These mark Non-War Graves.

A ‘non war grave’ is any grave that the CWGC maintains but which falls outside of the terms of our charter: either the individual died outside of our dates of responsibility or was not part of the armed forces of the British Empire/Commonwealth or other recognised organisations.

There nearly 10,000 such graves in the UK, most of which the CWGC maintains on behalf of the United Kingdom’s Ministry of Defence.

There are a number of sites which have bespoke designs of headstones such as Harefield (St. Mary) Churchyard or Great Yarmouth Cemetery. These sites and the grave markers here pre-date the foundation of the War Graves Commission in 1917. The markers were created by the servicemen’s comrades or by a military authority like the Royal Navy, and these headstones have been retained to conserve the unique history and heritage of these sites.

Over 130,000 Commonwealth servicemen and women with no known grave are commemorated on our memorials to the missing across Britain.

More than one in three of those commemorated in Great Britain are named on a memorial to the missing. The largest group commemorated in this manner are the men and women of the Royal Navy, who having been lost or buried at sea, had no grave to mark. To give their families somewhere to visit and remember their loved ones, their names were recorded on the three great naval memorials at Chatham, Plymouth and Portsmouth.

Men and women from other branches of service are also commemorated on memorials in GB. The layout and design of each varies, however, all record the names of the fallen grouped together by either unit, date of death or ship on which they served, and are then listed according to rank and then alphabetically by surname. 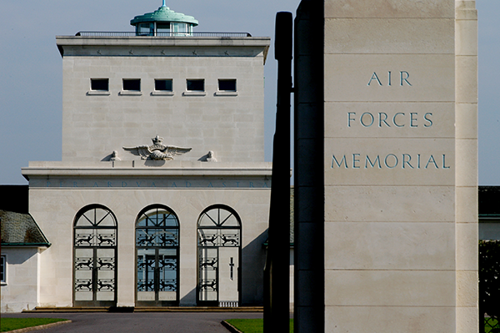 At many cemeteries and churchyards around Britain you will find a green and white sign at the entrance which states that “At this location there are Commonwealth War Graves.”

Designed by Sir Reginald Blomfield, the stone cross with downward sword reflects the faith of the majority of those commemorated in the cemetery.

Initially known simply as the ‘Great Cross’, it later became known as the Cross of Sacrifice. The cross is usually found in war cemeteries with over 40 commemorations and it varies in size depending on the size of the cemetery. We use four different sizes, which range in height from 4.4 metres to just over 9 metres, depending on the size of the cemetery in which it is placed.

In the UK the Cross of Sacrifice, if one is present, may be close by to a war graves plot or it may be placed elsewhere in the cemetery to signal the presence of war graves – often at central location, at a junction between pathways, or close to the cemetery entrance.

Also known as the ‘War Stone’ or ‘Great Stone’, this feature is usually only found in much larger sites or dedicated military cemeteries. Designed by Sir Edwin Lutyens, it is carved out of a single piece of Portland stone and is inscribed with words chosen by Rudyard Kipling: ‘Their Name Liveth for Evermore’.

Each stone is the same size regardless of the size of the cemetery. Measuring 1.067m high by 3.658m long and 844cm wide at the base, it weighs around eight metric tonnes. To the naked eye, it may seem like a straight edged piece of stone, but the top of the stone is slightly curved. This is an architectural technique called Entasis. If you continued the curve of the stone, it would form a sphere with a radius of nine hundred feet. This technique helps to give the stone a feeling of solidity and gravitas.

The stone evokes a general religious or spiritual sentiment which can appeal to multiple faiths and none, symbolising the sacrifice made during both world wars. 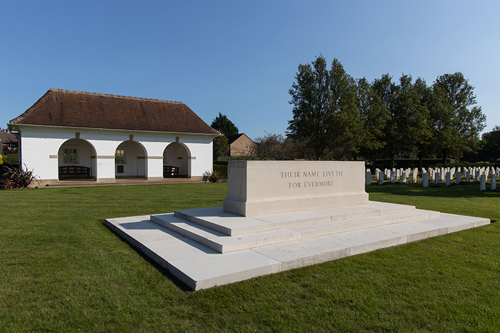 Where enough war graves are grouped together, we can provide full horticultural treatment, including our famous planted borders and carefully maintained turf. In some places we can’t plant things because of pests, like rabbits or deer, or because cemetery rules require turf or stone chippings only. In some cemeteries we can surround war plots with carefully maintained hedges. In very large plots or wholly maintained sites our horticulture ranges from large trees to small anti-splash plants. 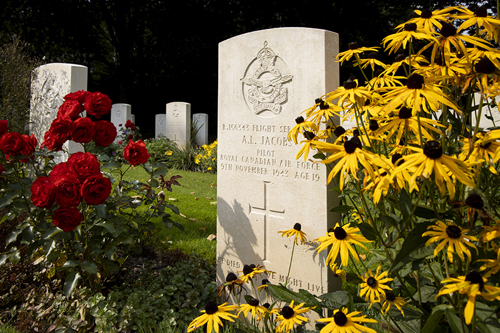