For the anniversary of VJ Day, which marked the end of the Second World War in the Far East, we’ve picked out five of our cemeteries and memorials which commemorate those who lost their lives fighting Japanese forces and those who died as prisoners of war. 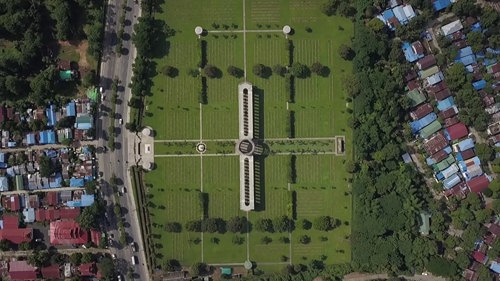 Yokohama War Cemetery was built by the Australian War Graves Group following the Second World War and holds over 1,500 casualties who either died as prisoners of war or while serving with occupation forces at the end of the war. There is a single First World War burial and a Dutch War Grave alongside a post-war plot that contains 171 non-war service and civilian burials.

Two memorials stand in the cemetery. The Yokohama Memorial commemorates 20 members of the Army of Undivided India and the Royal Indian Air Force who died while serving with the occupation forces in Japan, for whom no burial or cremation information exists.

The Yokohama Cremation Memorial is a shrine that houses an urn containing the ashes of 335 soldiers, sailors and airmen of the Commonwealth, the United States of America and the Netherlands who died as prisoners of war in Japan also stands within the cemetery.

Rangoon Memorial stands in the centre of the of Taukkyan War Cemetery, in Myanmar. It commemorates nearly 27,000 land forces of the British Empire who died during campaigns in Burma and who have no known grave.

The memorial, designed by H J Brown, is circular in shape allowing inscriptions in English, Urdu, Hindu, Gurmukhi and Burmese to stand with equal importance. It is flanked by two long colonnades which provide shelter from the sun and rain.

The memorial was unveiled by General Sir Francis Festing, Commander in Chief of the Far East Land Forces on 9 February 1958. In his address at the unveiling, he said that the memorial presents a picture of a simple truth – that of a multitude of men of many races and widely differing faiths, who gave their lives in a common cause.

Kohima War Cemetery is one of the most unusual of the 23,000 CWGC sites as it is formed around a tennis court that was the site where the 2,500 strong garrison of Kohima held out against a Japanese force of 15,000.

The first burials were made at what is now known as Kohima War Cemetery after the fighting in 1944, over the following years isolated burials were brought from across the surrounding area, and plots for different religions were created.

In 1948, when the cemetery passed into the care of the CWGC, the Commission architect Colin St. Clair Oakes incorporated the unique features of the site into his design, including the tennis court across which the battle had raged, and the only cherry tree to have survived the battle.

Today the iconic cemetery holds over 1,300 Commonwealth servicemen. 900 Hindu and Sikh soldiers who were cremated in accordance with their religion; their names now stand on the Kohima Cremation Memorial within the cemetery.

Listen to our Legacy of Liberation podcast episode below about Imphal and Kohima to discover more about this remarkable cemetery.

On the same morning as the Japanese attack on Pearl Harbour, Japanese forces also attacked the Hong Kong Garrison, leading to a brief but brutal period of fighting ending in the surrender of the Commonwealth Forces in the area on Christmas Day 1941.

There are nearly 1,500 Commonwealth casualties buried at Sai Wan War Cemetery or commemorated on one of the memorials that stand in its grounds. Most of the casualties were killed during the initial conflict, but there are also casualties who died as prisoners of war and were brought to Sai Wan for burial after the war.

The infamous Burma-Siam railway was built during the Second World War so that the Japanese forces in Burma could be resupplied via land instead of by sea. To build the railway and its multiple bridges Allied prisoners of war and thousands of conscripted civilians were forced to work as labourers from the beginning of the project in June 1942 until its completion in October 1943.

As immortalised in the film The Bridge over the River Kwai conditions for the prisoners and civilians alike were atrocious with many deaths amongst the labour force caused by malnutrition, physical abuse and tropical diseases like malaria and cholera.

Kanchanaburi War Cemetery is the largest of the three with over 5,000 Commonwealth burials, including 300 men who died at Nieke camp and were cremated. Their ashes now lie in two graves in the cemetery and their names are inscribed on panels in the shelter pavilion. The cemetery also contains close to 2,000 Dutch war graves and a single non-war grave.

Alongside these burials stands Kanchanaburi Memorial which bears the names of 11 men of the army of undivided India buried in Muslim cemeteries in Thailand, where their graves could not be maintained.

Learn more about the story of the war in the far east and CWGC's cemeteries and memorials which now commemorate those who lost their lives during the conflict.