Seventy years ago, on the 8th July 1951, crowds gathered at Stonefall Cemetery, Harrogate for the unveiling and dedication of the Cross of Sacrifice. According to a local newspaper report, despite the month, it was a grey, showery afternoon. Perhaps the weather reflecting the mood of those gathered. 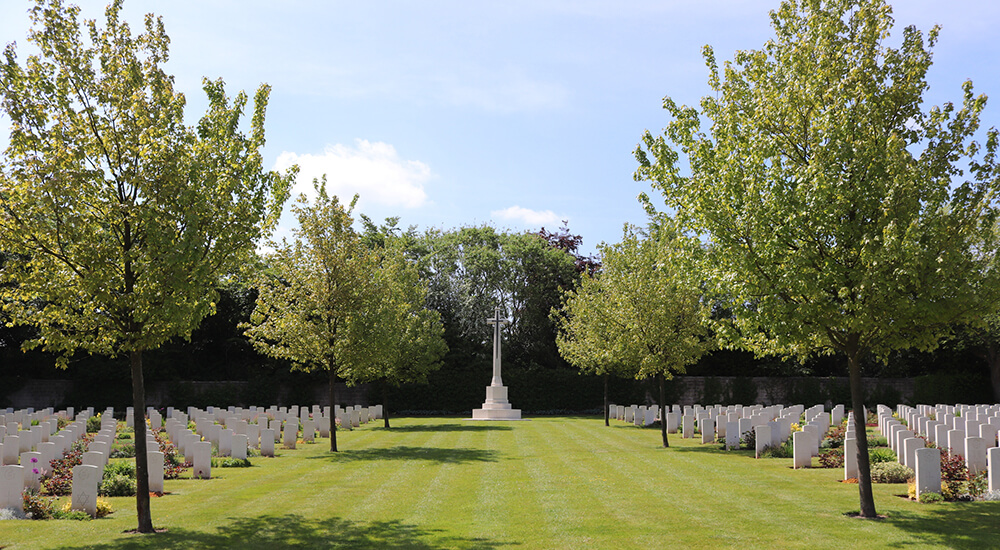 Less than ten years earlier, the ground on which crowds were assembled was a field but now it was the final resting place of over 900 servicemen and one woman who had died serving the Commonwealth during the Second World War and now lay in the care of the Imperial War Graves Commission.

The decision to create a site at Stonefall for Air Force burials was taken in June 1943 with the first interment taking place taking place the following month and almost 140 further burials that year. In 1944 over 550 Air Force crew were to lose their lives and be buried at Stonefall an average of 10 casualties a week.

Many of those interred at Stonefall were bomber crews and generally they were buried side by side with their comrades. At its conception, the plot at Stonefall was for Air Force casualties from Yorkshire, Northumberland and Durham but in 1944 this expanded to include Lincolnshire and Nottinghamshire. The digging of the graves, which in 1944 was more than forty a week on occasions, fell to Mr Linfoot, Cemetery Superintendent from Harrogate Borough Council, who struggled to find the labour for this task due to most able-bodied men serving in the armed forces. 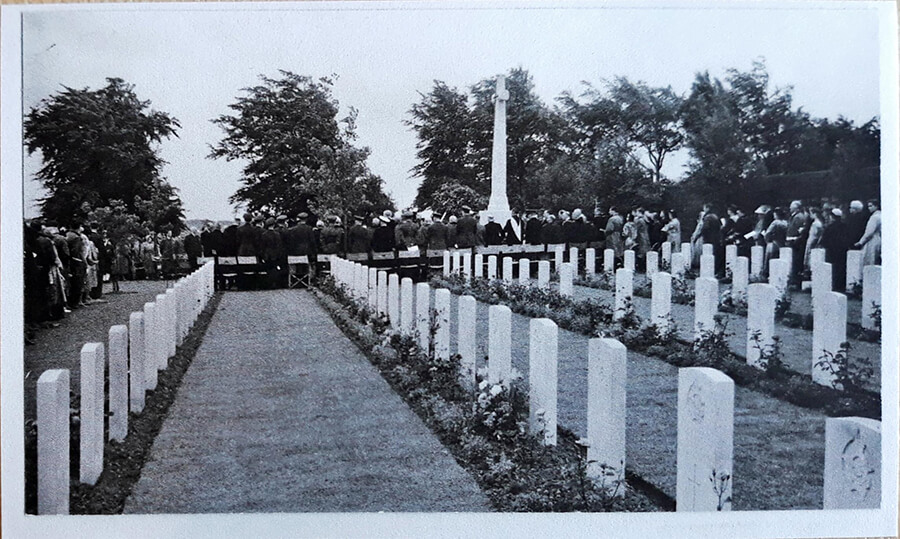 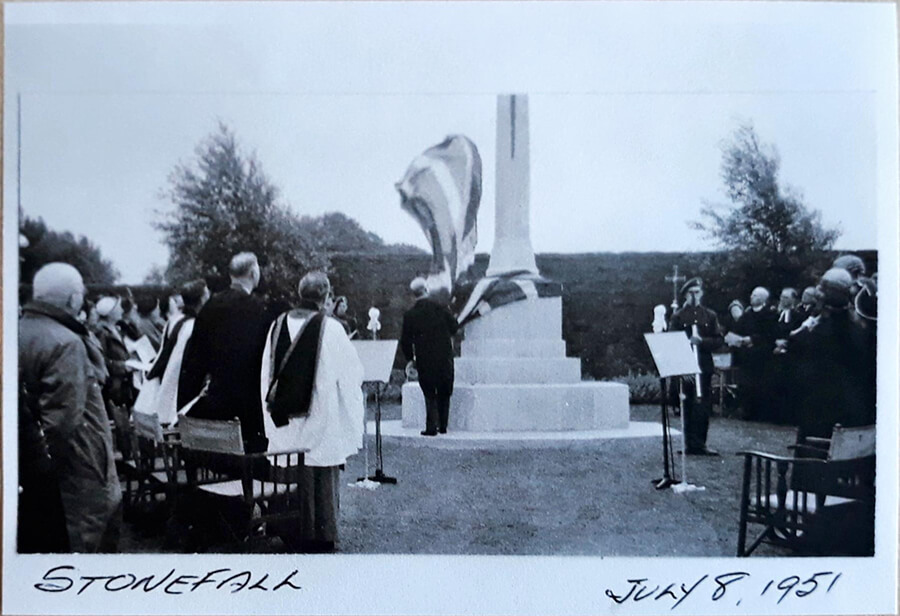 It is significant that members of the Royal Canadian Air Force made up around two thirds of the casualties at Stonefall. Involvement in the British Commonwealth Air Training Plan was Canada’s main war effort. Through the Plan 160,000 aircrew were trained in Canada with Canadians making up around half of this number. For much of the war 6 Group of Bomber Commander, a Royal Canadian Air Force formation, was based in Yorkshire. Alongside the Canadians a significant number of 6 Group personnel were from the Royal Australian Air Force and the Royal New Zealand Air Force as well as RAF as is reflected in the casualties at the site.

The presence of so many Canadian casualties, was reflected in those attending the unveiling service. His Excellency, the High Commission for Canada, Mr L D Wilgrass unveiled the Cross of Sacrifice and said of those buried at Stonefall, ‘Their memory gives renewed courage in the uncertain world of today.’ He also paid thanks to men and women of Harrogate who had adopted the graves through the Stonefall Adoption Committee resulting in a large volume of correspondence and friendships between families across the Commonwealth. The High Commissioner said, ‘The evidence of your continued kindness strengthens those indivisible links which bind us together in common ideals.’ 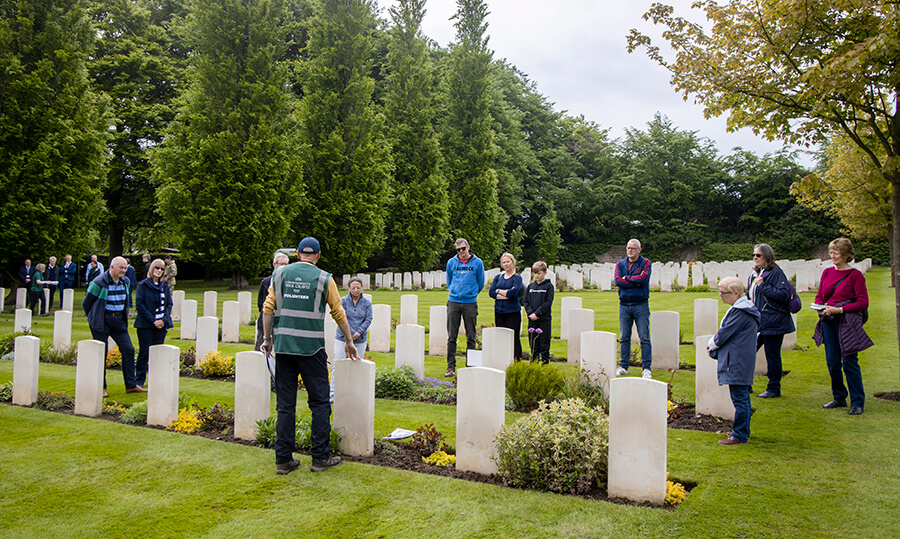 As well as senior military figures and local dignitaries, relatives of the fallen had travelled across the globe to attend the service: The parents of Pilot Officer George Jekyll of the RAAF who died along with his crew returning to base, flying at low level in bad weather after a successful mission; Major Ernest Sirluck MBE, the brother of Robert Sirluck of the RCAF who died with all his crew flying out on a mission shortly after take-off when the engine stalled; the wife of Flight Lieutenant Ivor Emerson RCAF, who lost his life when icy conditions led to his plane falling from the sky and crashing into houses in York. British relatives were in attendance too including some for whom financial reasons would have stopped them attending had it not been for the hospitality of Harrogate’s Royal British Legion Victory branch.

This year, to mark the 70th anniversary of the unveiling and dedication of the Cross of Sacrifice, CWGC volunteer tour guides will be giving tours to the public between the 8th and 11th of July. Seventy years on their memory still ‘gives renewed courage in the uncertain world of today’.

Join us for our Harrogate 70th Anniversary tours

We'll be running tours at Harrogate Stonefall Cemetery between 8 - 11 July. Join us for a walk around the cemetery to learn about the work of the CWGC and the stories of some of those buried at Stonefall. The tours will also feature details of the dedication ceremony which took place in July 1951.