At Your Service - 40 years with the CWGC

External Relations Manager for WEA Central, Christine Connerty, reminisces about her career with The Commonwealth War Graves Commission and discusses how much has changed over the last 40 years. 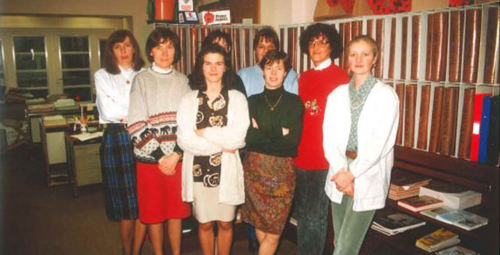 I joined the Commission in my very early twenties, some 40 years ago. I had just graduated from college and had no idea what to expect.  History was never my cup of tea but languages, and in particular, English were my strength. Talking English was cool but working with the British was a different matter.  People from 'across the sea' have a different culture and attitude, which was a little difficult to get used to, but I came to love it over the years.  In my whole career I have worked with 9 different directors - first in NWEA, then in NEA, then in WEA and now in WEA(C), and all without ever leaving Ieper. My 10th director is set to join us soon. This time, however, it is not a Brit — but a Belgian, no less! How things have changed…

My first job was in the typing pool! Yes, typing for other people was a common thing back then. Letters and notes were handwritten, and people like me were employed to decipher the handwriting and type them out. Not many people will remember the old mechanical typewriters, but these were robust German machines, making a lot of noise and not allowing you to correct your typing errors (which could be embarrassing at times). 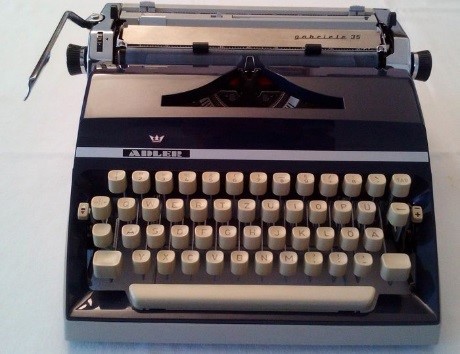 Gradually, in the 80’s these machines were replaced by electronic machines, before we finally ended up with the computer.  The first computer with internet connection in our office in Ieper — yes, there was only one — was introduced in the early 1990s. But only the senior managers were allowed to use it at first — if they could.

In addition to my job as a typist, I started quite early on to get involved in what we now call ‘public engagement’. Before the days of internet — that was still a distant dream —people couldn't do research at home but instead called in on us to do the research for them. This meant that lots of relatives and researchers visited our office, where we could help them with their traces.  The details of all the First and Second World War casualties were stored in heavy old books, which you could hardly lift and are now antique historical items! 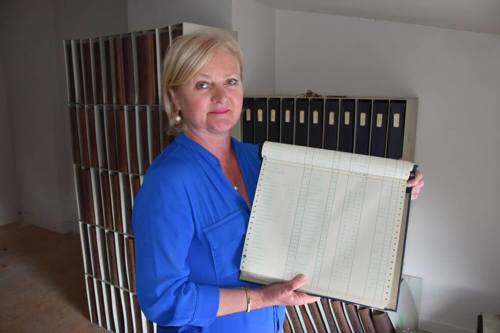 Christine holding an index of WWII (at the top, details of two soldiers carrying her Christian name ‘KETELS’) and behind the WWI records.

It could take you up to a couple of hours when trying to trace someone from WWI. The war records were arranged by regiment and then alphabetically. If you didn't know the correct regiment, you were out of luck. Head Office had alphabetical records but checking with them meant you had to make an international phone call. Believe it or not, but before I could make such a call I first needed permission from my manager! Although it could take you a long time before you had a positive trace, it was so rewarding and heart-warming to be able to help individuals, who were often next of kin. At the end of these visits, there were frequently tears. 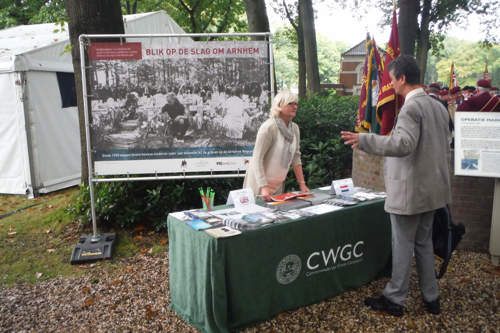 There was still a strong British community in Ieper during the 80’s and 90’s and many young families moved to the continent to work for the CWGC. One of my jobs was assisting them with the ‘integration’ into their new country; looking for houses to rent, finding schools for the children, arranging their registration and medical cover, helping with language courses etc. Even teaching the wives how to clean a tiled floor!

I had a short stint in the finance and transport section but I always kept my hand in with records and enquiries, which even today is still my favourite task. Being closely involved with the public and remembering why we exist as an organisation is core to our 'business' and is still the reason why I continue to do my job with pleasure. Never forgetting the poor boys who gave their lives for our freedom, frequently visiting war cemeteries to pay my respects and always remaining grateful for the opportunities I have been given — opportunities they never had.

A few more years and my career with the Commission will end. I have seen many changes not only of people but more strikingly of behaviour. I have known the times when smoking in the offices, even in the toilets, was a common thing and serving alcohol during working hours was not frowned upon.

We were all generalists and we knew bits of everything. Now we depend on specialists. It’s not always been ‘roses, roses all the way’ but I have many fond memories of the people I have met and worked with. Gosh, this sounds like a farewell letter. I am not gone yet! I will continue to give my all until the end!