Buried in a foreign land – German graves in the United Kingdom

The CWGC commemorates Commonwealth casualties at sites across the globe, men and women who died in the world wars and never returned home. Here, CWGC's Official Historian, George Hay, explores the history of German soldiers and airmen who are buried across Great Britain. 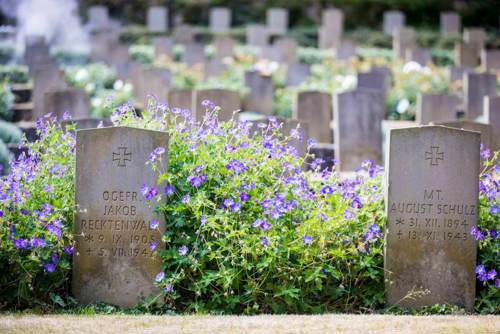 Stumbling across a war grave in the UK can be a common occurrence – especially once you have your eye in. Whether you encounter a lonely grave in a small parish churchyard when out exploring the countryside or happen across one of the larger CWGC plots that dot our towns and cities, you are rarely that far from a casualty of one of the two world wars.

Those who know something of the CWGC’s history might find this surprising, especially if they have visited the former battlefields in France and Belgium where the organisation built its largest monuments and cemeteries in the aftermath of both conflicts. One of the founding principles of the CWGC was that fallen Commonwealth servicemen and women would be commemorated where they fell – so why were some laid to rest at home? Well, some died in accidents, some on active service (primarily the RAF, for obvious reasons), but in most cases it is because these men and women returned home sick or injured during or after the war and their deaths were attributable to their service.

Look a bit harder, however, and you will find more than Commonwealth graves. In fact, a search using the CWGC’s casualty database will demonstrate a wide variety of foreign war graves in the United Kingdom, including more than 2,500 Germans from the First World War and more than 3,700 from the Second World War. How they came to be here is just as interesting.

Starting with the more obvious, more than half of German commemorations on British soil for the Second World War are for men of the German air force. Even with the United Kingdom safely separated from the German army by the English Channel, the Luftwaffe was still able to bring the war to the people of Britain – first in a battle for air superiority ahead of a potential invasion (the Battle of Britain), followed by the strategic bombing campaign of British cities. 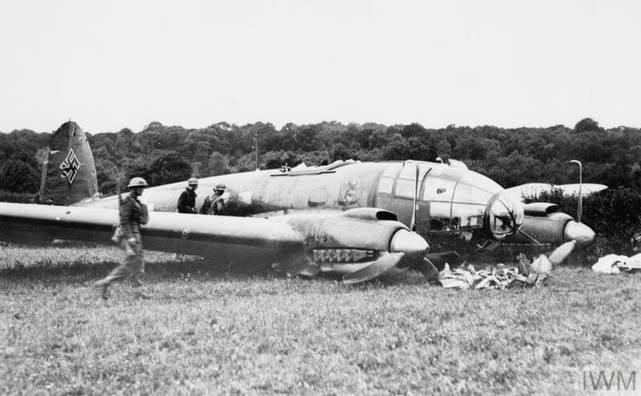 Prolonged aerial campaigns then answer for the majority of the 1,868 German airmen who lost their lives flying over the UK and who were subsequently buried here. But these airmen are not alone, as there are also just shy of 3,500 soldiers of the German army from both wars similarly buried on British soil. In a slightly different set of circumstances, most of these men would have died as prisoners of war, most likely from wounds suffered before capture or from illness – particularly influenza before repatriation in 1919. 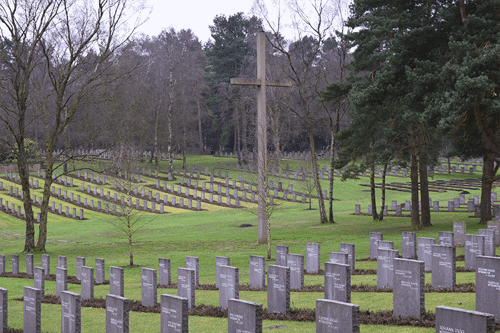 Where you find these graves depends on several factors, but the vast majority now lie in Cannock Chase German Military Cemetery. On 16 October 1959, an agreement was concluded between the governments of the United Kingdom and the Federal Republic of Germany concerning the future care of the graves of German nationals who lost their lives in the United Kingdom during the two World Wars.

The agreement provided for the construction of a new central cemetery to house German graves not situated in plots of Commonwealth graves maintained by the CWGC. Following the agreement, the German War Graves Commission (Volksbund Deutsche Kriegsgraberfursorge or VDK) arranged for the transfer of these scattered graves of German servicemen and civilian internees of both wars to the new cemetery being constructed at Cannock Chase. The inauguration and dedication of this cemetery, which contains almost 5,000 German and Austrian graves, took place on 10 June 1967. 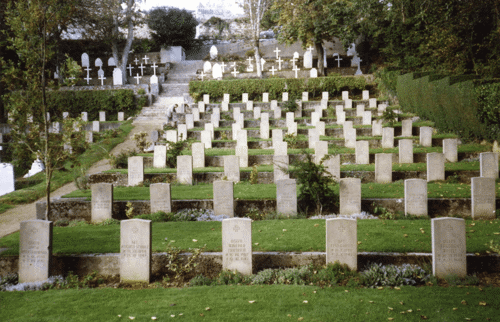 Those that still lie outside Cannock Chase are found within established war graves plots maintained by the CWGC, but unique among them for a number of interesting reasons are those buried at Fort George Military Cemetery on Guernsey. Although often forgotten, the Channel Islands were the one part of the British Isles occupied by German forces during the Second World War.

Soldiers who lost their lives on service on the islands were naturally buried there at numerous sites, with the Germans establishing a dedicated cemetery at St Brelade's Church on Jersey for more than 300 men. In the aftermath of the war and following the 1959 agreement, however, these men and all those buried across the Channel Islands were exhumed by the VDK for reburial at Mont-de-Huisnes in France. The one exception was the 111 men buried at Fort George, St. Peter Port on Guernsey, where they lie among the graves of Commonwealth servicemen. Like those at Cannock Chase, and those Commonwealth service personal buried all of over the UK, all these men remain in the care of the CWGC.