Mentioning the two world wars immediately evokes the bloody trench fighting of the Western Front, the Invasion of Normandy and the jungle fighting in Burma. But some of the hardest fighting of both wars took place in the harsh climates of Africa. Discover more about the world wars in East Africa and find out more about Commonwealth war graves in Kenya.

Kenya in World War I

At the outbreak of the war, much of Africa was under the control of European colonial powers including Great Britain, Germany, France, Belgium and Portugal. This influence meant that the European war overspilled into Africa.

Some of the earliest fighting of the war happened in Africa, in fact the first shot of the war by a British soldier was fired in Togo by Regimental Sergeant-Major Alhaji Grunshi of the Gold Coast Regiment.

Much of East Africa was split between British East Africa, now Kenya, and German East Africa, now Tanzania. When war was declared, these two powers faced each other across a long border. Initial fighting was piecemeal, such as German raiding parties crossing the border, and the British Naval bombardment of Dar es Salaam. One of the major battles of the early years of the war in East Africa was the amphibious attack on the port of Tanga by the Indian Expeditionary Force. Despite a strong advantage in numbers, the attack failed.

The capital Dar es Salaam was quickly captured but, despite being isolated and heavily outnumbered, German forces under the command of Paul von Lettow-Vorbeck conducted a successful retreat into the country’s interior. Over the next two years, Allied troops pursued German forces in a gruelling campaign, failing to inflict a decisive victory. The war in Africa only came to an end after news reached von Lettow-Vorbeck of the armistice on the Western Front, and German forces formally surrendered on 25 November 1918.

Throughout the war, Kenya was caught between two enemy forces. To the North, Italian East Africa, an area of east Africa that today makes up Ethiopia, Eritrea and Somalia. To the East lay the Indian ocean where vital trade routes between Allied forces in Europe, Africa and Asia were at constant risk of attack by enemy raiders.

Much of the fighting in Kenya during the war occurred at the northern Kenyan border against Italian forces in East Africa. The Italian forces, who also had British forces on the northern border of their African holdings, were squeezed between two fronts. Initially, the Italian forces attacked the borders of Kenya and Sudan, as well as threatening the Suez canal in the North and capturing British Somaliland.

In response, the British planned a three-pronged attack. In early 1941, forces from Sudan attacked into Eritrea, while troops from Kenya advanced north into Italian Somaliland and an amphibious attack landed to retake British Somaliland. These three forces advanced into Ethiopia and the campaign eventually ended with the Battle of Gondar in November 1941. This spelt the end of any official Italian presence in East Africa, although guerrilla forces continued to harass British troops until the official Italian surrender in 1943. 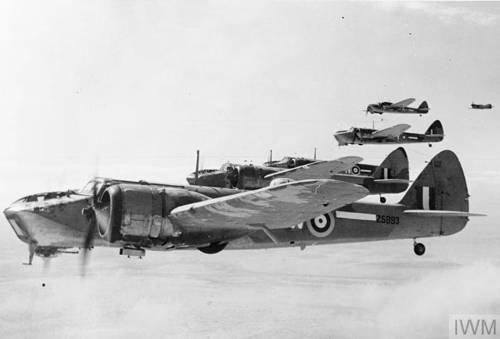 The vastness and difficulties of the terrain in East Africa are exemplified by the story of Blenheim Z7763, which crashed near Mount Kenya in 1942 and lay undiscovered for 60 years. Such was the remoteness of the crash that the plane was not recovered until 2016. Upon recovery, the four South African Air Force airmen were identified and buried at CWGC Nanyuki War Cemetery. (Left: Bristol Blenhiem IWM CM 3108)

One of the major operations in the region during World War Two was Operation Ironclad, an amphibious invasion of Madagascar in 1942. The island was under the control of Vichy France and was a strong strategic position that would allow Japanese submarines a base from which to attack Allied shipping.

The attack began on 5 May 1942 with the aim of capturing the important port of Diego Suarez. On 6 May, the destroyer HMS Anthony steamed straight past the harbour defences of Diego Suarez and landed 50 Royal Marines to the rear of the Vichy forces. The following day the garrison surrendered, and the French governor-general of Madagascar agreed to negotiate.

Despite this, most of the island remained out of Allied control. In September, Commonwealth forces, including troops from East and South Africa, began a series of amphibious landings around the island. On 6 November, the governor-general agreed to an armistice. 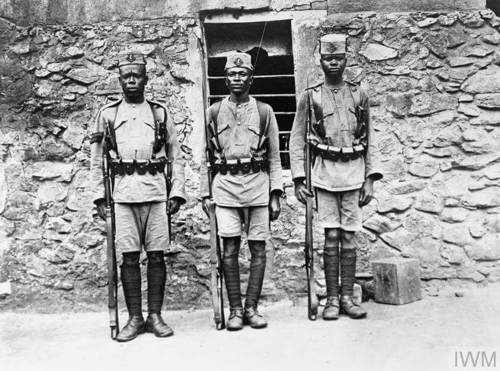 In World War One, Kenyan combatant troops raised for the East African campaign numbered at least 10,500. They largely served with the King’s African Rifles, a mixture of British soldiers and men from across East Africa.

Kenya also provided nearly 200,000 non-combatant porters, stevedores and followers, largely serving in the Military Labour Corps. These men provided vital support to military operations in East Africa, transporting valuable supplies and equipment across difficult terrain that was often impassable for vehicles. At least 26,000 Kenyans serving in these capacities were killed in action or died of sickness or wounds.

After the war, the Commission faced considerable difficulties with the commemoration of servicemen who had died in East Africa. In the vast majority of cases, the military authorities had not marked the graves of Indian and African servicemen during the war, leaving little in the way of physical evidence on the ground. In the war’s aftermath, the same authorities were unable to provide the IWGC with detailed lists of the dead.

Believing few records or war grave locations existed, but also wrongly assuming that African ethnic groups would not value European forms of commemoration, the Commission allowed most graves to “revert to nature” and constructed symbolic but nameless memorials for these casualties.

Where East African servicemen had been buried in permanent military cemeteries, the Commission typically did commemorate them by name. However, for the vast majority of East Africans who died in the war, the Commission’s three African memorials – one in Tanzania at Dar es Salaam, and two in Kenya at Mombasa and Nairobi – serve as points of commemoration.

Following the release of the Non-Commemoration report in April 2021, the Commission has been working to right the historical wrongs outlined in the report of the Special Committee.

We have also been looking at partnerships in Africa, India and the United Kingdom with the aim of engaging local communities with the culture, heritage and stories of those not commemorated. Our first such event took place at Kariokor in Nairobi, where local students found out more about the history of the world wars in Kenya and researched some of the casualties commemorated there. 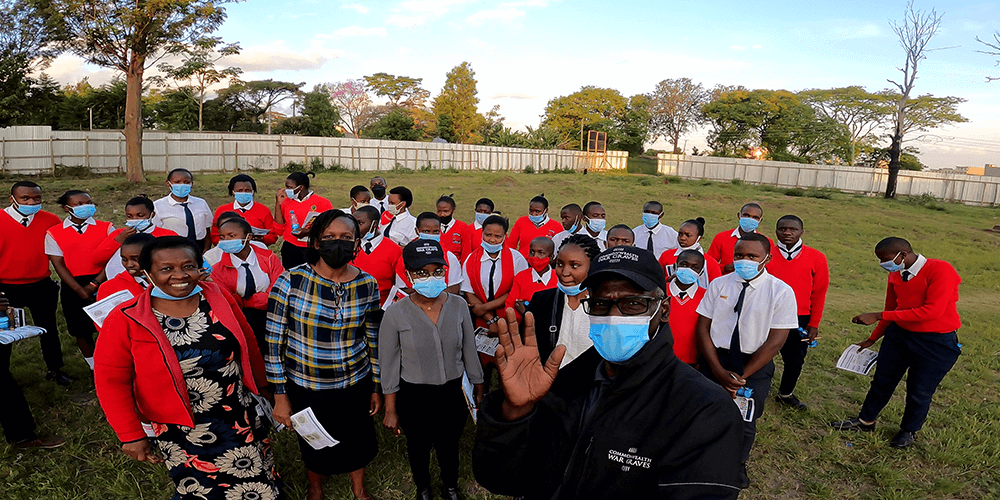 There are 38 Commonwealth war graves and sites in Kenya. Find out more about them, and some of the stories of the men commemorated there.

The town of Voi is located in southern Kenya, not far from the coastal city of Mombasa. It became a hospital centre early in 1916. Between August 1915 and December 1917, 100 burials were made in the cemetery and after the Armistice, a further 37 graves were brought in from nearby cemeteries.

The origin of Voi Cemetery can be traced back to the burial of a civilian engineer (Mr. O'Hara) in 1899, who was killed by one of the famous 'Man-eaters of Tsavo' - a pair of man-eating lions who terrorised workers on the Kenya-Uganda railway. It contains 137 Commonwealth burials of World War One, one of which is unidentified. The Commission also has responsibility for six non-war burials in the cemetery.

Kariokor Cemetery is one of the main cemeteries found in the Kenyan capital of Nairobi. Both the cemetery, and the suburb in which it is found, is named after the Carrier Corps of the World War One.

The cemetery contains 59 Commonwealth Casualties of the Second World War, three of which are unidentified, from a range of African regiments including the King’s African Rifles, East African Army Service Corps and the East African Army Medical Corps.

CWGC are working with Museums of Kenya to ensure that Kariokor Cemetery remains a key part of the local community in Nairobi. The project includes constructing a boundary wall and gate house and engaging the local community near this site. This work, alongside Museums of Kenya, will ensure that the cemetery remains a key heritage location reinforcing Kenya’s history during the world wars, and the sacrifices of those commemorated there.

During the Second World War, Nairobi was the headquarters of the East African Force and the base for the conquest of what was then known as Jubaland and Italian Somaliland, the liberation of British Somaliland and the sweep north-westwards to open Addis Ababa for the return of the Emperor.

Designed by G. Vey, Nairobi War Cemetery was opened in 1941 and contains 1,952 Commonwealth burials of the Second World War, 11 of which are unidentified. There are also 76 non-war burials and one French grave, making it the largest war cemetery in East Africa.

Located in Nairobi War Cemetery is the East Africa Memorial, which bears the names of 2231 casualties of the Second World War.

It bears the inscription:

THE COLUMNS IN THIS ENCLOSURE BEAR THE NAMES OF TWO THOUSAND FOUR HUNDRED MEN AND WOMEN OF MANY RACES UNITED IN SERVICE TO THE BRITISH CROWN WHO GAVE THEIR LIVES IN ITALIAN SOMALILAND, SOUTHERN ETHIOPIA, KENYA AND MADAGASCAR, BUT TO WHOM THE FORTUNE OF WAR DENIED A KNOWN AND HONOURED GRAVE

You can discover more about the CWGC sites in Kenya including visiting information and more about the records we maintain through our Cemeteries and War Memorials search tool.

Interested in learning more about the African casualties of WW1?

Discover our How to Research guides
Our latest blogs
Blog
Remembering the revolutionary Battle of Cambrai 105 years on
Blog
In the Line of Duty: Remembering the Great War's fallen Generals
Blog
Taking the field: Footballers who died in the World Wars
Read more blogs
Share this on
Tags How to Research Kenya War Graves