From Roman mosaics hidden under farmland to kings buried in car parks, there is a rich tapestry of history across the United Kingdom – but none more so than the history of the two world wars. We sent Sarah Nathaniel, Public Engagement Coordinator (South East), out to research a village near her. Read on to discover what ties she found to the world wars and the work of the CWGC. 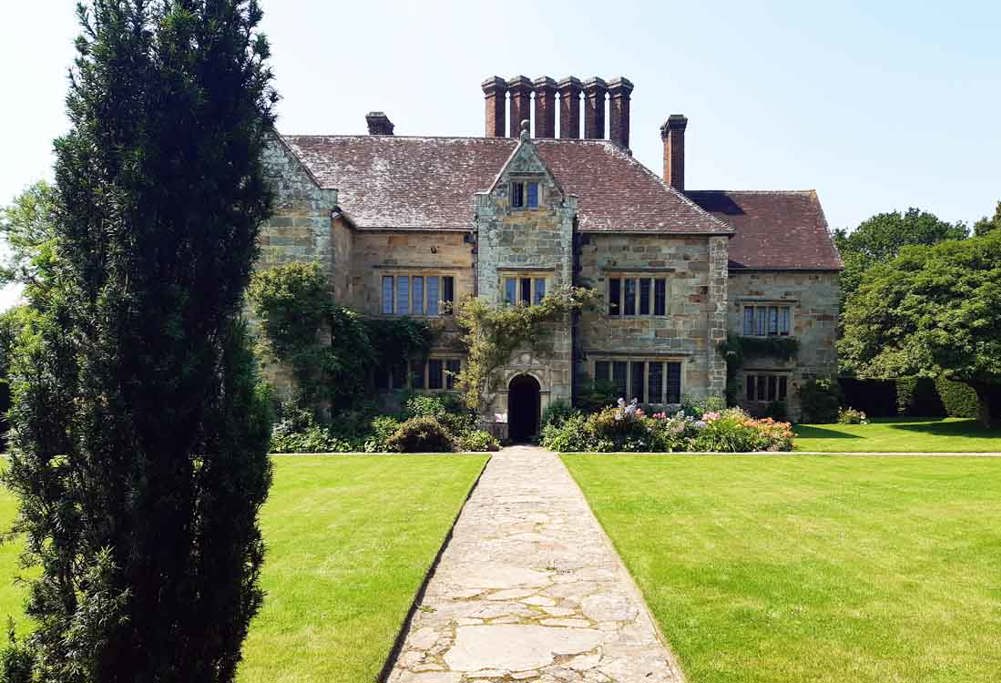 Batemans, the home of Rudyard Kipling.

In a corner of rural East Sussex lies the village of Burwash. Probably most well-known as the home of Rudyard Kipling, who lived at Batemans from 1902 until his death in 1936, the village has a number of fascinating connections to the work of the Commonwealth War Graves Commission.

We will come to Kipling, of course, but let’s start in the churchyard of St Bartholomew’s; home to nine CWGC casualties from both wars. These men provide an interesting snapshot of what is typical in many of our British churchyards.

As is common in British cemeteries, the majority of those commemorated here are Burwash born and bred and victims of illness, accidents or war-related injuries sustained elsewhere.

The youngest of these is Boy William Langridge. Langridge was a new entrant to the Navy, his record showing that his service had only begun on 6th September 1918. He was based at HMS Ganges, a training establishment in Shotley, Suffolk, for boy entrants to the Navy and it is here that he succumbed to bronchial pneumonia on the 7th November 1918, aged only 16. Unlike families whose loved ones served abroad and were subject to the ban on repatriation, those who died in the UK could be buried according to family wishes.

One of the more unusual stories in the churchyard is that of Captain James Robert Ewing of the Royal Sussex Regiment. On the night of the 17th May 1915, he was killed at Folkestone junction whilst inspecting posts and sentries under his command. Local newspapers and the subsequent inquest said that it had been a wet and windy night and it was assumed that he had been hit by a train. 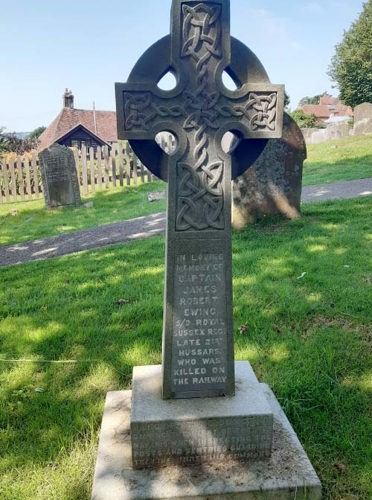 His body was found near to the railway lines the following morning by a train driver with a wound to the head. Sergeant Major Carter who had often accompanied Ewing on these inspections, told the inquest that he was on leave that night but had suggested to Ewing that he take someone with him. Ewing had laughed and said he had been down these lines many times before. He also reported that they usually took electric lamps with them, but no such lamp was found by Ewing. His death seems to have been a tragic accident and a verdict of ‘accidental death’ was recorded.

A man of both world wars

A further interesting burial can be seen of a casualty who had seen service in both world wars. Wing Commander William Charles Farley was born in Burwash in 1893, working as a law clerk before the outbreak of the First World War, when he joined the Royal Sussex Regiment in 1914 before obtaining a commission with the Royal West Surrey Regiment. In 1918 he transferred to the Royal Flying Corps as a 2nd Lieutenant, obtaining his aviator’s certificate at Ruislip Military School. He was based at Netheravon Airfield in Wiltshire at the end of the war. The London Gazette records further promotions; in 1919 he became Squadron Leader and in 1940 was appointed Wing Commander.

Farley was a victim of the Nottingham Blitz. On the night of the 8th/9th of May 1941, around 100 German planes bombed Nottingham, causing widespread damage; 159 people were killed and another 274 injured. Wing Commander Farley, who was resident there at the time, was one the victims. He was buried in Burwash with full military honours on the 14th May 1941.

The church porch provides the next fascinating connection to the CWGC’s work, housing thirteen original wooden grave markers of Burwash men commemorated by us abroad. 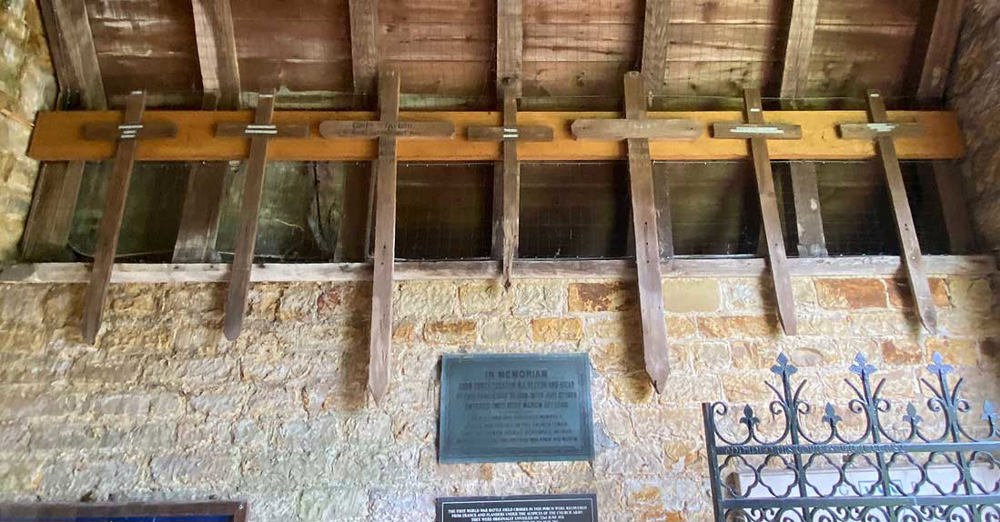 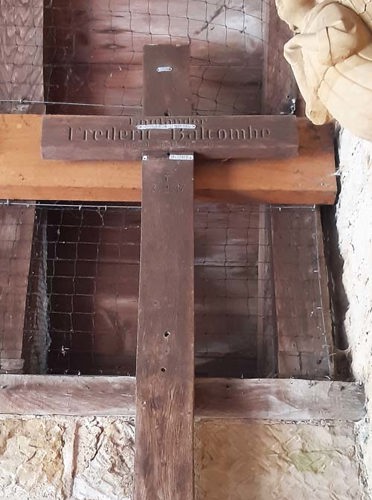 After the war, as the Commission plans to erect permanent headstones and memorials began, relatives could request to have the original wooden markers from their loved one’s grave returned to them when the permanent headstones were erected. It is thought around 11,000 markers were returned to this country. The return of the grave markers at Burwash was carried out under auspices of the Church Army; they were originally dedicated in 1924 and later restored and rededicated in 2015.

Although there are many of these wooden crosses to be found across the country, Burwash is unusual in that he has so many in one place and so well preserved. They again tell us a story of where Burwash men found themselves as the First World War ground on.

Perhaps one of the most interesting of the crosses belongs to Frederick Charles Balcombe who joined the Royal Army Service Corps at Hastings in 1915, before transferring to Dundee and joining the Royal Scots Division. Sent to France in May 1917, he was listed as missing in the field on the 22nd August and on the 26th November he was recorded as a POW. On the 4th April 1918, the German Red Cross confirmed he had died whilst a POW of wounds received during a gas attack. He is buried at the CWGC Harlebeke New British Cemetery, Belgium. Initially, burials here were of those brought in from the surrounding battlefield but, in the years 1924-25, burials were of casualties brought in from German cemeteries in Belgium - which no doubt included Frederick Balcombe. His original cross is very clear and appears to have been German made. 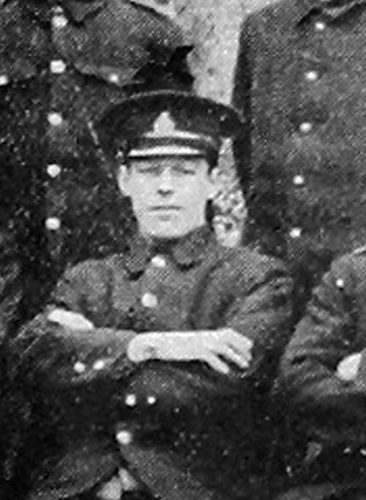 Another Burwash local, Ernest James Brown, a married father of four, enlisted at Bexhill into the Royal Sussex Regiment. Ernest was killed in an attack on the Schwaben Redoubt on the Somme on the 12th of October 1916, leaving a widow and four children. The Hastings and St Leonards Observer for the 19th of May 1917 records that he was awarded the Military Medal for bravery in the field. The photograph shows Ernest alongside three other brothers who also joined up. One of these was also killed, but no records remain of the other two, hopefully telling us that they survived the war.

Of course, perhaps the most famous connection is of that to the Kipling family. Inside the church itself is a plaque to John Kipling, Rudyard’s 18-year-old son, who died at the Battle of Loos on the 27th September, 1915. The story of the Kipling’s long and desperate search to discover what had happened to their son after he was reported missing is well-known, but there is a particular poignancy in reading this plaque in the local church and visiting Batemans, the Kipling’s former home, where you can stand in John’s bedroom and see his personal items. Kipling, of course, went on to become the Literary Adviser to the Imperial War Graves Commission in 1917 and as such was responsible for all our literary output, including the now iconic words on CWGC headstones and memorials; the best known perhaps being the epitaph for the missing, ‘A soldier of the Great War known unto God’. 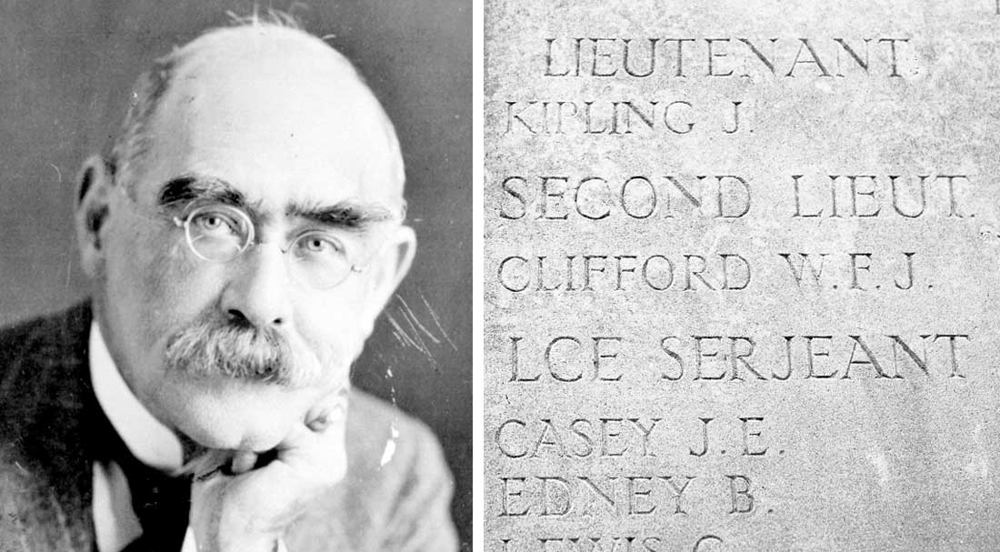 John Kipling has been commemorated by us at St Mary’s ADS Cemetery, near Loos, since 1992, although his name was originally recorded on the Loos Memorial at Dud Corner Cemetery in France. John is also listed on the beautiful grade 2 listed Burwash war memorial, where the lantern at the top is lit on the anniversary of the death of each Burwash man recorded on the monument, a unique ceremony which has taken place since 1920. 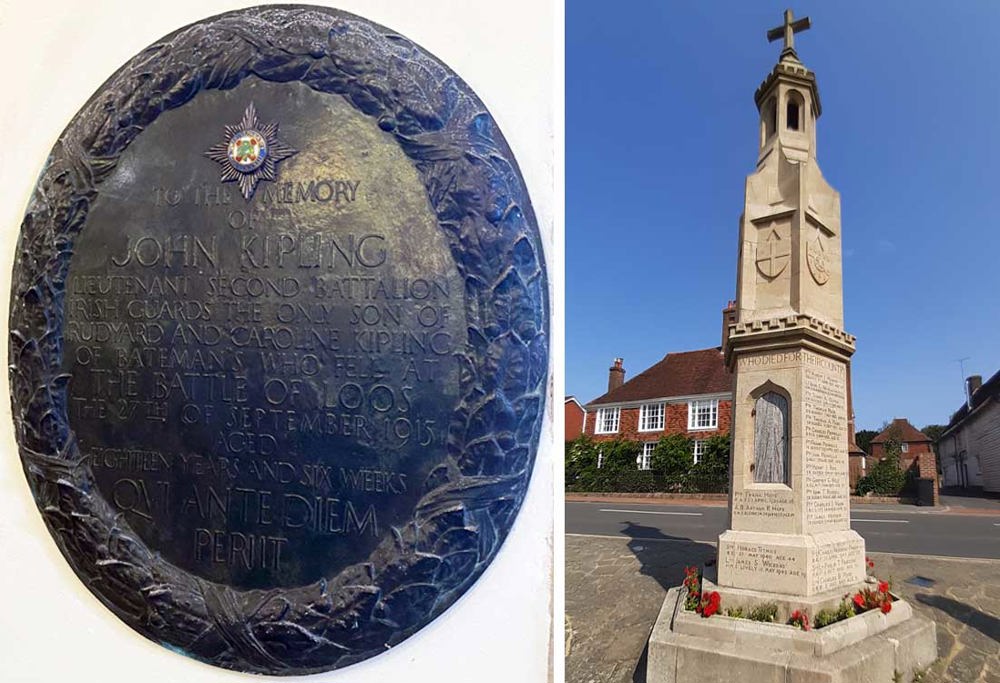 While there isn’t a village in the UK that has not been touched by both world wars, and all of them with interesting stories to tell of the individuals from there that fought and died, Burwash is a particularly fascinating destination for anyone with an interest in the history and commemoration of the First World War.

Many thanks to Philip Baldock for sharing his initial research on the Burwash casualties.

Want to learn more about the history in your area?

Discover the CWGC sites near you with our handy mobile app.