Have you tried the new CWGC App yet? It’s a must-have for anyone looking to discover the history of the World Wars on their doorstep. Find out how you can explore cemeteries and Commonwealth war memorials in London using the app.

With over 23,000 locations in more than 150 countries and territories, you’re never far from a piece of your history. From large cemeteries and ornate memorials, down to single headstones in remote churchyards, you can use our app to find nearby CWGC burials and memorials wherever you are.

Planning a trip out? Simply enter a town or postcode and you’ll be able to see a list or map showing every CWGC location nearby. Or, if you’re out and about, hit the Find locations near me button and you’ll get a list of all of our sites near you.

Tower Hill Memorial commemorates 36,000 sailors of the Merchant Navy that have no grave but the sea. The First World War section was unveiled in 1928 and commemorates almost 12,000 names, with the Second World War extension, unveiled in 1955, bearing the names of a further 24,000 casualties. 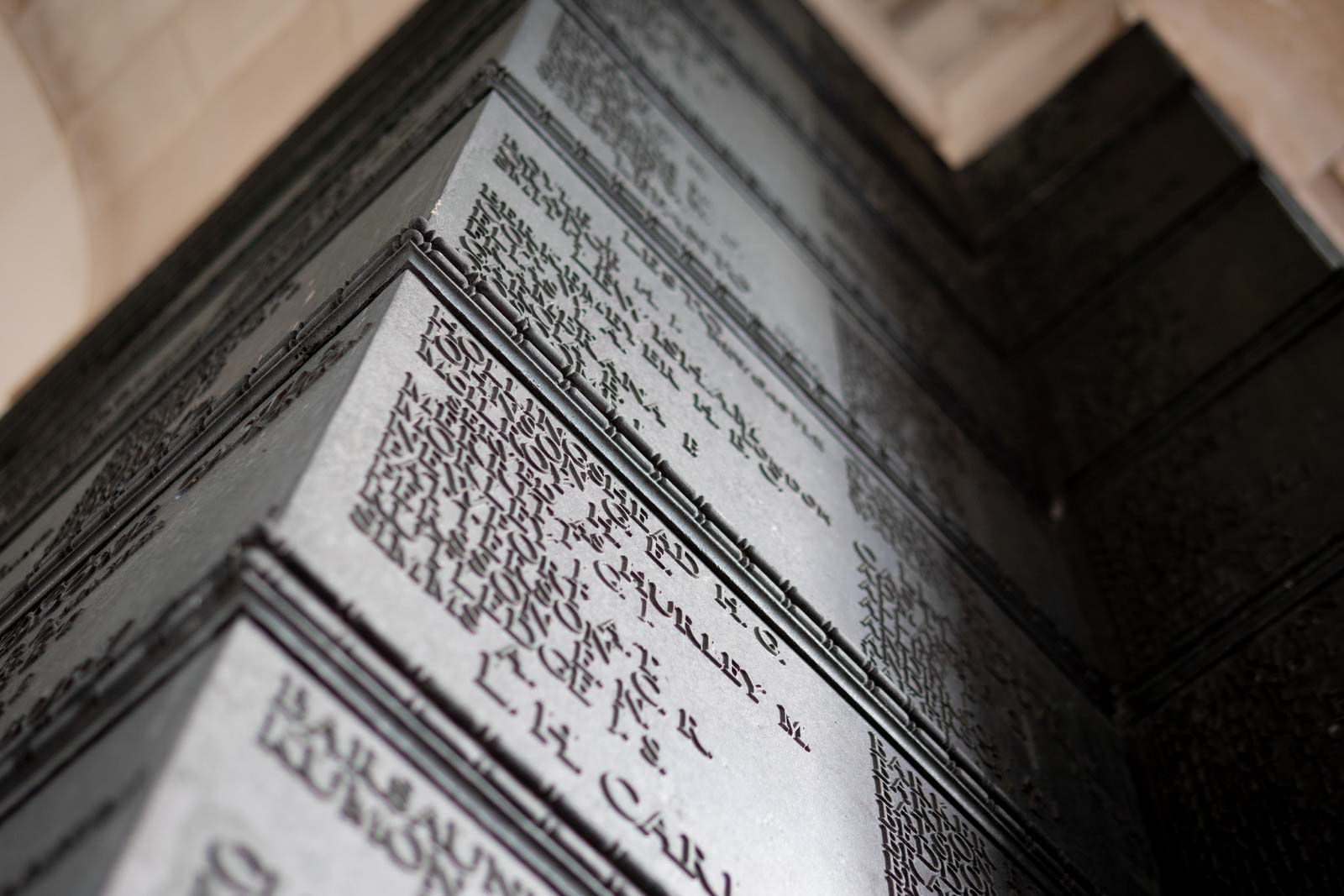 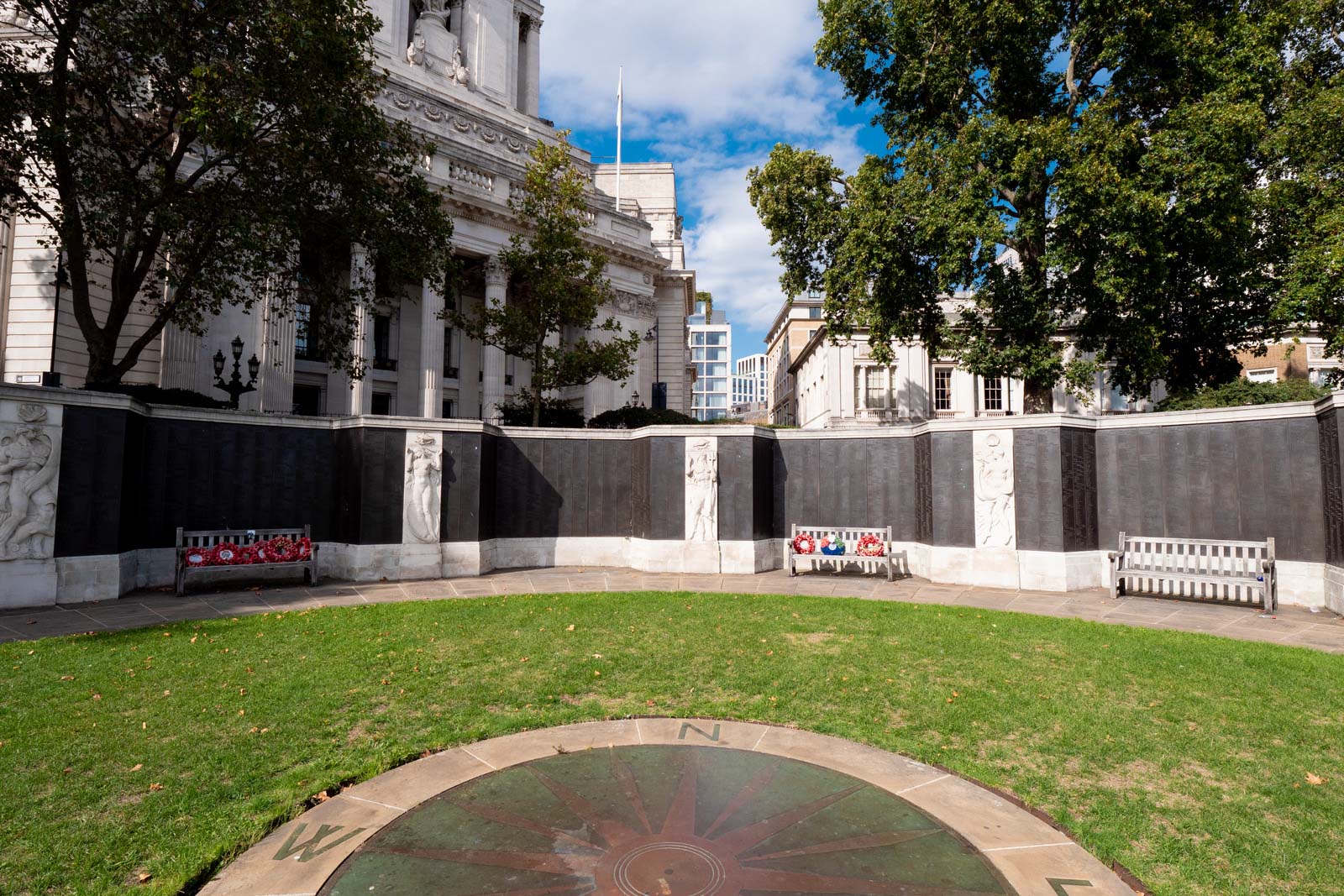 Where is the war memorial in London?

Barely a stone’s throw from the historic Tower of London, Tower Hill War Memorial in London stands alongside the River Thames in the centre of London. The memorial’s position was chosen to best represent the names of the war dead engraved on its walls.

100 years ago, the Thames was the main artery that connected London to the sea, a highway that linked the capital with the rest of the world. During both wars, sea trade became even more important. As an island nation, cutting sea trade between the United Kingdom and her allies was a key strategy in knocking her out of the war.

It fell to the convoys of the merchant navy to provide a lifeline and deliver the supplies essential for the war effort. As such, they became a key target for both naval and aerial attack – the heaviest losses were suffered in the Atlantic, but Second World War convoys making their way to Russia around the North Cape, and those supplying Malta in the Mediterranean were also particularly vulnerable to attack.

Many of the casualties of the two world wars buried in London are commemorated in public cemeteries around the city. The City of London Cemetery and Crematorium (Manor Park) is one of the largest municipal cemeteries in Europe and holds over 700 casualties from both world wars.

The cemetery itself was formed in the 19th century, with its first burial in 1875. There are a number of notable burials, including Annie Chapman, the second victim of Jack the Ripper, and George Leslie Drewry who won the Victoria Cross during the First World War. In the adjacent Manor Park Cemetery the youngest ever Victoria Cross winner John Travers Cornwell, who won the award during the Battle of Jutland in 1916, aged just 16 years old. 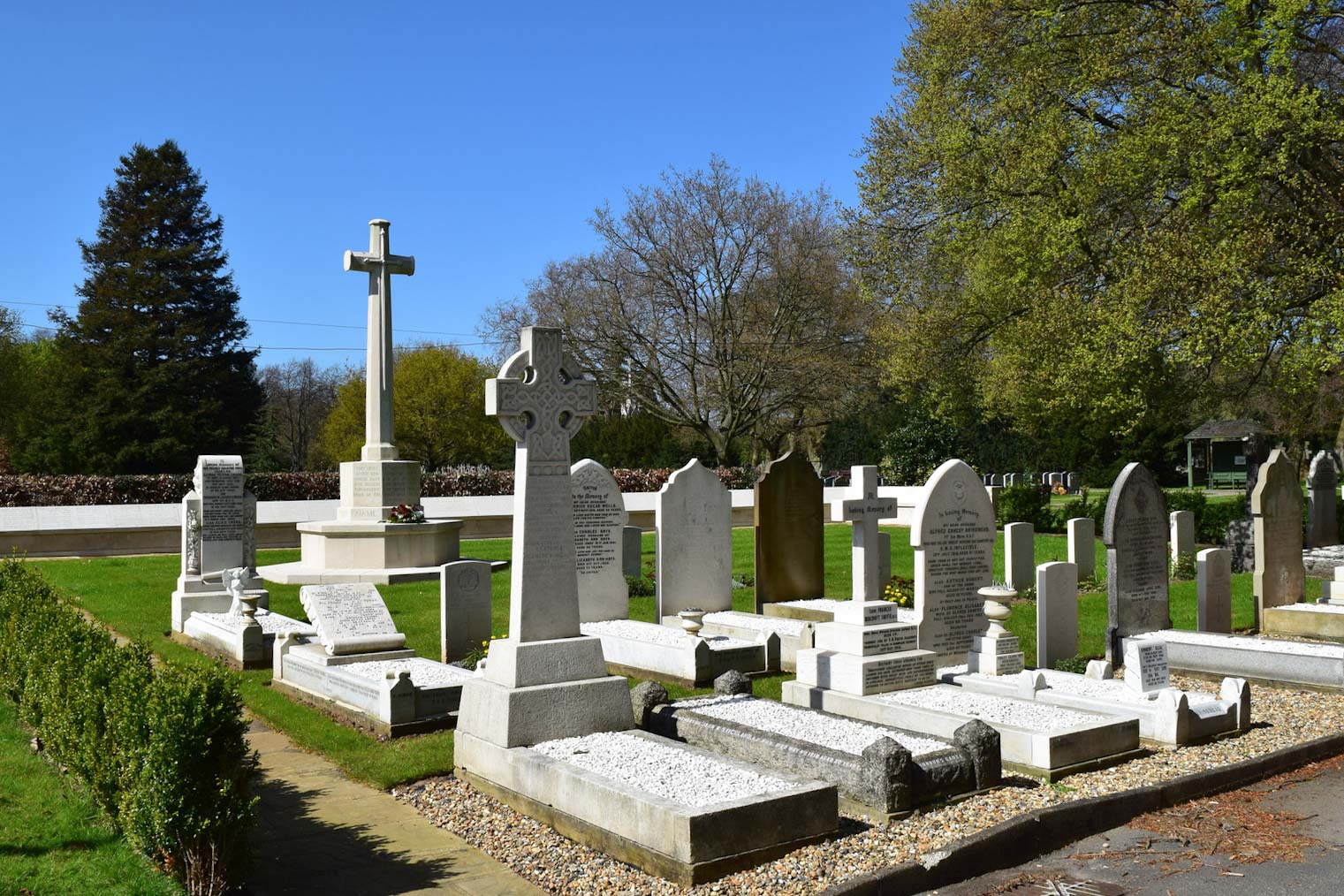 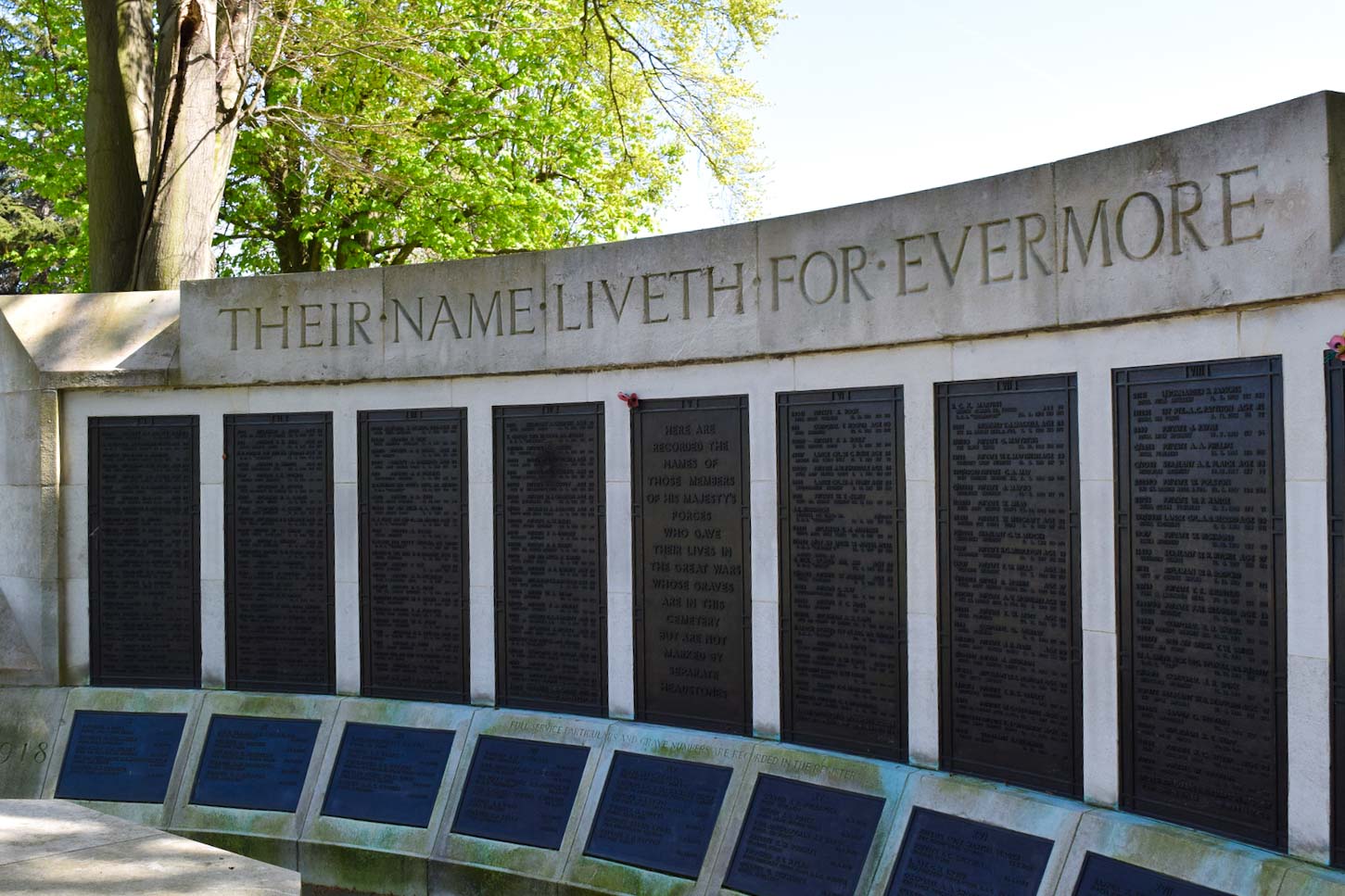 During World War II, many major towns and cities in Britain including London were targeted in a bombing campaign by the German Luftwaffe between September 1940 and June 1941 in what became known as the “Blitz” and this led to the widespread destruction of infrastructure and the deaths of over 40,000 civilians.

A number of bombs dropped during the Blitz landed in the City of London Cemetery, including one which damaged the section that had been set aside early in the war for service burials. The damaged service plot was quickly restored and re-turfed. Today in this plot and throughout the cemetery, 400 servicemen and women of the Second World War are commemorated, including 70 who were cremated in the City of London Crematorium.

Find out more about the City of London Cemetery and Crematorium

Established in the 1840s by the London Cemetery Company at a time when London’s population was rapidly expanding, Nunhead (All Saints) Cemetery is the second largest of the capital’s ‘magnificent seven’ Victorian cemeteries.

The cemetery was used for the burial of service personnel during both world wars, either of servicemen who died in one of the many military and civilian hospitals across London, or those who had ties to the local community. During the Second World War, the iron railings around the cemetery were requisitioned for the war effort, and the cemetery was bombed on several occasions during the Blitz, damaging the Dissenters’ chapel so badly that it was later demolished, and damaging or destroying many of the grand Victorian mausoleums, headstones and graves.

After the war, the cemetery went into further decline, and by 1969, when it was abandoned altogether by the private owners, it had become heavily overgrown. In 1977, we were able to restore the First and Second World War plots and rebuild the screen walls at a new location in 1986. The cemetery however remained closed to the public until May 2001, when it was reopened following an extensive restoration project funded by Southwark Council and the Heritage Lottery Fund, in partnership with Friends of Nunhead Cemetery.

Find out more about Nunhead (All Saints) Cemetery 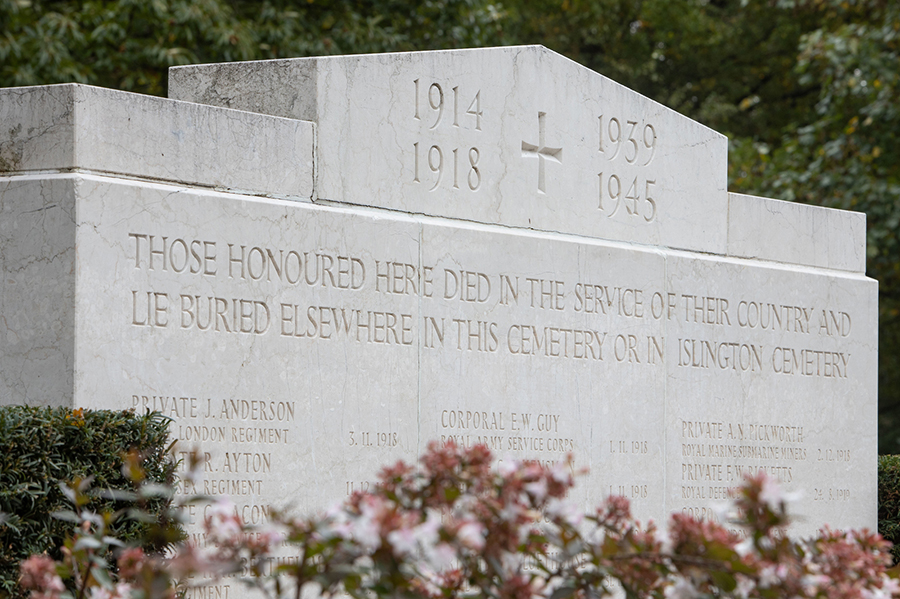 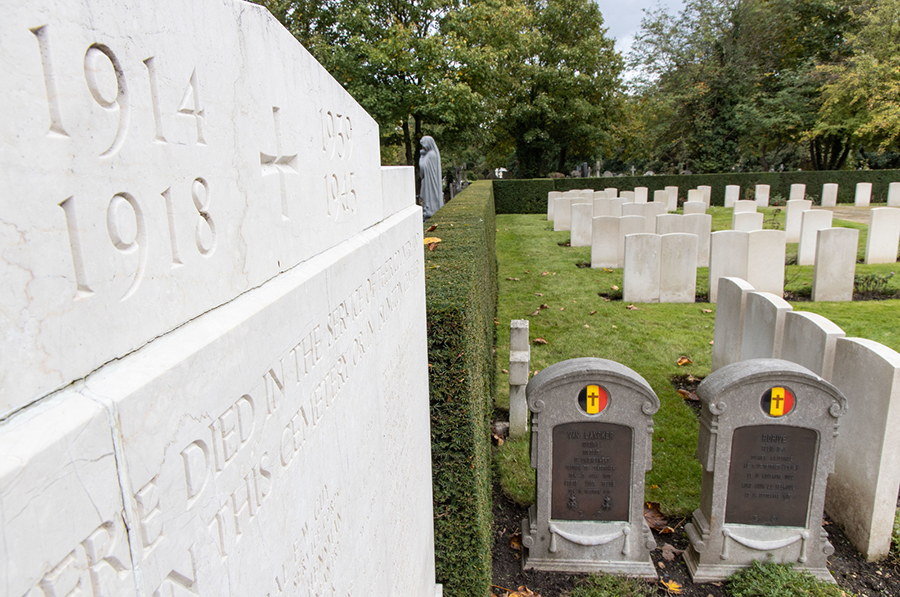 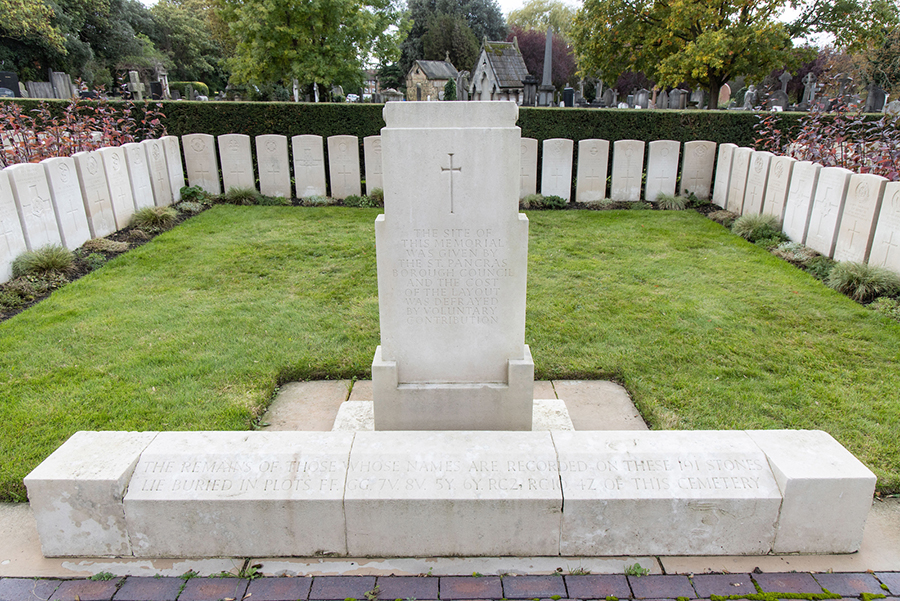 Established in 1854, St. Pancras Cemetery was the first municipally owned cemetery in London. Established at a time when London’s population was rapidly expanding, clear land was sought on what was then the outskirts of the city, on Finchley Common in Barnet, north London. Further land was acquired in 1877, and the 190-acre site was divided between St. Pancras and the neighbouring borough of Islington, to form two cemeteries.

Find out more about Nunhead (All Saints) Cemetery

Other War Memorial Sites to Visit in London

The following sites are not under CWGC care but are important monuments to World War history.

The Unknown Warrior at Westminster Abbey

Westminster Abbey is located West of the Houses of Parliament in the borough of Westminster and is the site of the grave of the Unknown Warrior, whose body was brought from France following the First World War.

As plans were being drawn up for the unveiling of Sir Edwin Lutyens’ Cenotaph in November 1920, a proposal that the body of an unknown soldier be returned to England for burial to represent all those who had been lost in the Great War, gathered momentum.

Learn more about the story of the unknown warrior from CWGC’s Media and PR Executive, Peter Francis. While not a CWGC memorial, the Cenotaph is a key part of any tour of London’s world war history.

Built as part of the national Peace Day events of July 1919, the Cenotaph was initially intended to be a temporary landmark. It was designed by Sir Edwin Lutyens, one of the Commission’s principle architects following the end of the war. His designs, including the Thiepval Memorial in northern France, became synonymous with the idea of Remembrance and the Cenotaph was no different.

The original Cenotaph stood in Whitehall and was made out of wood, plaster and canvas. The name comes from the Greek for ‘empty tomb’ and it was immediately adopted as a pillar of remembrance in the UK by the British public, with over one million visitors in the days following its unveiling.

Such was the public appreciation for the monument, there were overwhelming calls for a permanent version to be erected. Lutyens updated his designs and, just 26 days after the unveiling, on 30 July 1919, the cabinet approved the proposal.

Today, more than 100 years later, the Cenotaph remains as the centrepiece of remembrance events in the UK, a stark reminder of those that lost their lives in the Great War and in all conflicts since.

How Many War Memorials are in London?

CWGC cares for 72 memorial locations across London - including the Tower Hill Memorial and multiple cemeteries.

Find War Memorials Near You

These are just a few of the many sites scattered around London – but no matter where you live, or where you’re planning a visit to, there will be a CWGC war cemetery or memorial nearby.

Find a CWGC site near you

Our updated app is a great way of finding your nearest CWGC headstones. Find your local churchyard or plan a trip further afield on our iPhone or Android app.