Communications Officer, Andrea Comacchio, uncovers the story of a Grandfather and Grandson who helped shape the Cassino War Cemetery.

"It’s often the case that the place where we perform our job duties has no particular relationship with our life or our past, but in some cases it is not like this”.

This is the story of Head Gardener Giancarlo Castiglia, a person who has a close family connection with Cassino War Cemetery.

Joseph Kitchen, Giancarlo's grandfather, was doing his military service in Blackpool (UK) when he was selected for training in Egypt. It was 1940 and the training turned into war. Joseph was part of the Royal Engineers and he fought in Egypt against the German forces during the African campaign.

After five years Joseph was transferred to Cassino (Italy) to support the Liberation campaign in the country. In 1945, when the war was about to end, Joseph was involved in the construction of Cassino War Cemetery. Initially, he was responsible for the exhumation of Commonwealth soldiers from the common graves. This procedure was very dangerous as German soldiers had often hidden landmines under the bodies of the casualties; the land mines exploded when the casualties were removed, injuring or even killing the rescuer.

Mary Anna, Joe's Mother, Walter, Joe's father, and one of his other sons, Joe with Elizabetta Bibasio, and Elizabetta (Tina)

Joseph had been working as an exterior decorator and painter before his military service. Due to this background, he was commissioned to perform the role of calligrapher, writing the names of the fallen on the wooden crosses that were used before the installation of headstones in the war cemeteries of the Commission.

After the war, Joseph returned to England with his girlfriend Elisabetta where he held the role of municipal councillor and Justice of the Peace for the city of Leeds. In the summer of 1948 Joseph returned with his family to Cassino for a summer vacation and for the first time he saw the cemetery, which he he had contributed to, completed. Joseph participated in many events organised by the Commission and took part in several pilgrimages around the world, including returning to Tunisia to find the comrades who fought side by side with him but who unfortunately could not return to their home.

Giancarlo was born in the United Kingdom and in 1981 he returned to Cassino where he permanently lives. Due to his strong historical and family connection with the cemetery, Giancarlo decided to apply for a job vacancy within the Commission. He initially worked as a gardener at Miniturno War Cemetery and after a few years, he was promoted and permanently transferred to Cassino War Cemetery, holding the role of head gardener in the same cemetery that was built with the help of his grandfather. 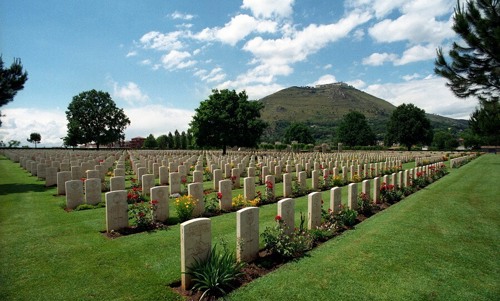 With over 24 years experience working as a gardener and head gardener for the Commission, Giancarlo also welcomes the tourists and visitors who come to Cassino War Cemetery every year to find their family members or just to learn more about the history of the Commonwealth soldiers that contributed to the liberation of Italy during the Second World War.

Giancarlo proudly shared with us the strong relationship that he established with some visitors. An example is Mrs Pam, a British visitor from Cornwall, who every year travels by car across Europe to visit her father buried in Cassino War Cemetery, or the many Italian and foreign students that every day come to the cemetery to understand, learn, remember and honour the thousands of servicemen who fought for freedom during the Second World War.

The women gardeners of World War One

We came across an interesting image of women tending graves of First World War soldiers out in France and wondered if they had a link with the Commission. Spoiler alert, they did!