Did you know that the Commonwealth War Graves Commission has staff working on every continent across the globe, apart from Antarctica? The CWGC’s 1,500+ strong workforce maintains the cemeteries and memorials from the two world wars, each site with unique challenges and opportunities. Meet some of the staff at the Commission, as you venture behind the scenes to see how they carry out their work across the world. 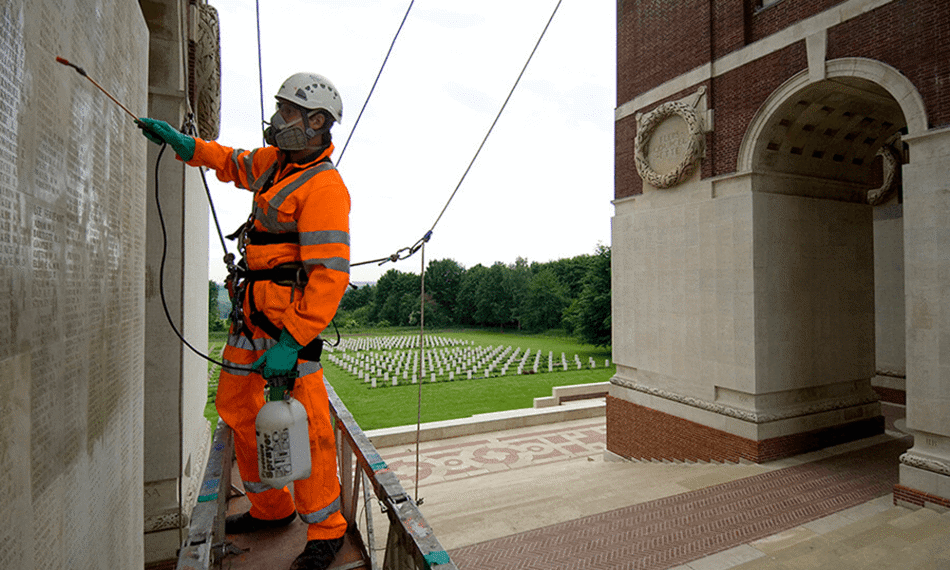 Cleaning the engraved stone panels on the Thiepval Memorial, France.

Working in the middle of nowhere

Imagine having a job that involves covering an area which spans almost 10 million square kilometres, much of it uninhabited and hard to reach. Well, that’s the job of our team based in Ottawa, Canada. The logistics are tricky - with more than 1,700 locations, 60 percent of our sites in Canada, contain just one war grave.

One of our team in Canada is Catherine Paterson who often ventures out to check on CWGC war memorials and cemeteries. Join her as she travels through places like Manitoba and Saskatchewan to carry out her work.

Cliveden War Cemetery is positioned within the grounds of Cliveden House in Buckinghamshire and is unlike any other CWGC cemetery in the world. Forty-four war graves of soldiers and nursing staff, from across the world, are in this cemetery set in a country garden.

What’s unusual is that the headstones in this cemetery aren’t upright like your typical CWGC site, they are instead lying flat on the ground. However, over time these grave markers, made from Crossland Hill sandstone, have become damaged. This meant that the Commission’s team of expert stonemasons needed to step in to restore and, for some, replace the grave markers. Watch the video below to see how they did it.

Learning about one of CWGC’s most famous war memorials

During World War One thousands of soldiers marched through the original gate to fight in the Ypres Salient, many never returned. Five years in construction, the Menin Gate was unveiled in July 1927 to commemorate the names of more than 54,000 Commonwealth servicemen who died during World War One. Today the Last Post is sounded at 8pm every day under the gate, becoming a focus point for many who visit the memorial from across the world.

Meet with Nele and Sanna who take you around the Menin Gate Memorial, discover how it’s being maintained and uncover the stories of those commemorated on its panels.

Maintaining the war memorials in the Middle East

It was after World War One that the main sites in Israel were built. One of those was Jerusalem War Cemetery, situated up in the hills by the city. Today the city has expanded around the cemetery. In Ramleh War Cemetery the Commission has introduced solar panels to power a watering system which helps the grass and plants survive the hot summers.

Discover more about our sites in Israel with Nancy Batshon and David Richardson as they show you their work in the country.

Restoring one of the largest war memorials in the world

Commemorating the names of more than 72,000 missing war dead from the Battle of the Somme, the Thiepval Memorial has stood on the same spot in France for almost 90 years. Today the team at the CWGC are carrying out a major restoration of the memorial to ensure that it can be preserved for future generations to come.

Meet Franck Michel, one of CWGC’s Stonemasons out in France, as he shows you the work he’s doing to help restore the memorial.

There is no other place to work like the Commonwealth War Graves Commission. Throughout its 102 years, this unique organisation has employed thousands of people across the world, in roles that you won’t be able to find anywhere else.