How to Find and Visit War Graves in France

Did you know that the Commonwealth War Graves Commission commemorates over 575,000 men and women of the Commonwealth forces who died during World War One and Two in France? In this handy guide Lucie Balin, from the CWGC, shows you how to find and then visit War Graves in France. 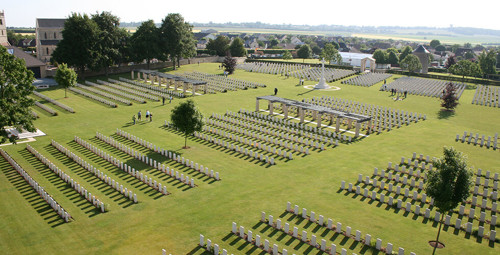 Most of the world war casualties in France are commemorated across northern France and in Normandy, making it the highest concentration of CWGC war graves anywhere in the world. In France, over 20 separate CWGC or national memorials to the missing were designed and built and about 3,000 cemeteries are cared for by the commission.

Discover how to find war graves in France using different features on the CWGC website.

So, let’s have a look at how to discover some of the final resting places of the world war dead cared for by the CWGC. When planning your trip to the Western Front, your first step should be to visit the CWGC website and prepare your itinerary. Using the dropdown ‘Visit Us’ menu, select ‘Find War Memorials and War Cemeteries’.

Then, select a country from the list, your locality of interest or, if you are already travelling around France, you can also use your current location. You will then get a list of all the war cemeteries and memorials near you.

Finding CWGC War Graves in France on the go

To make things even easier you could try downloading the CWGC’s mobile App which is available on the APP Store and Google Play Store. It’s a great travel companion when exploring the former battlefield sites of the Western Front and across France. You can quickly search for cemeteries by name, location, or use your phone’s location to find sites nearby. 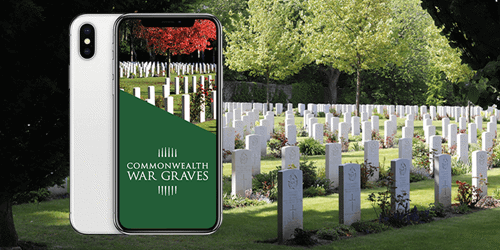 Interested in the Battles of the Somme, Cambrai or Arras? Another way of exploring our website to find a CWGC War Grave is to search by name. Albert, Pozières, Thiepval, Amiens, Vimy, Vis-en-Artois or Fromelles are not just names of towns and villages. They have also become associated with notions of tragedy and sacrifice, forever engraved in our memory.

To make your search even easier an exact match isn’t required, as you’ll be presented with a list of possible CWGC war cemeteries and memorials. In the Somme area alone, there are roughly 450 CWGC cemeteries and memorials to explore. A huge part of them reflects the magnitude and poignancy of the terrible losses endured during the battles fought in 1916. 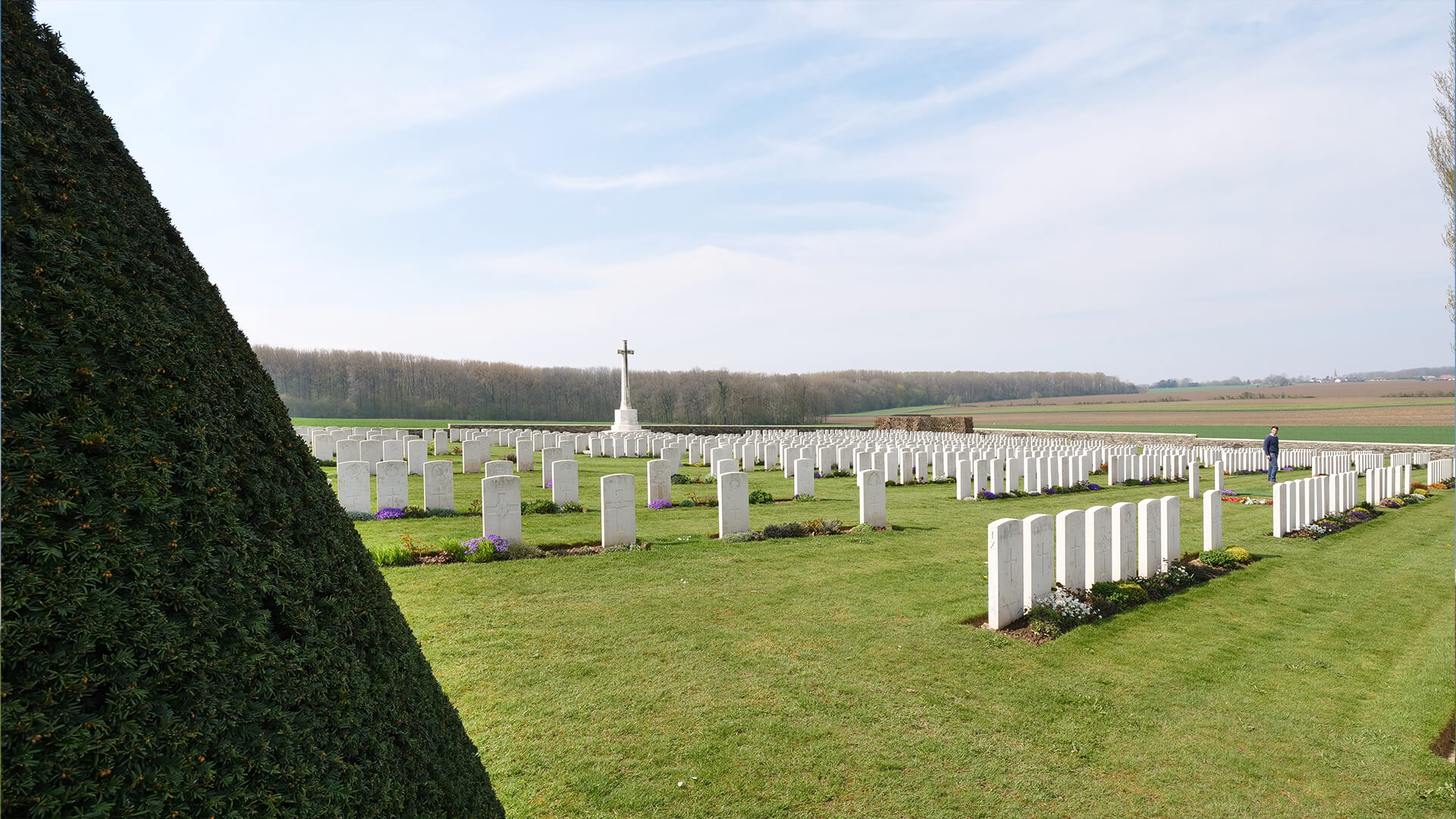 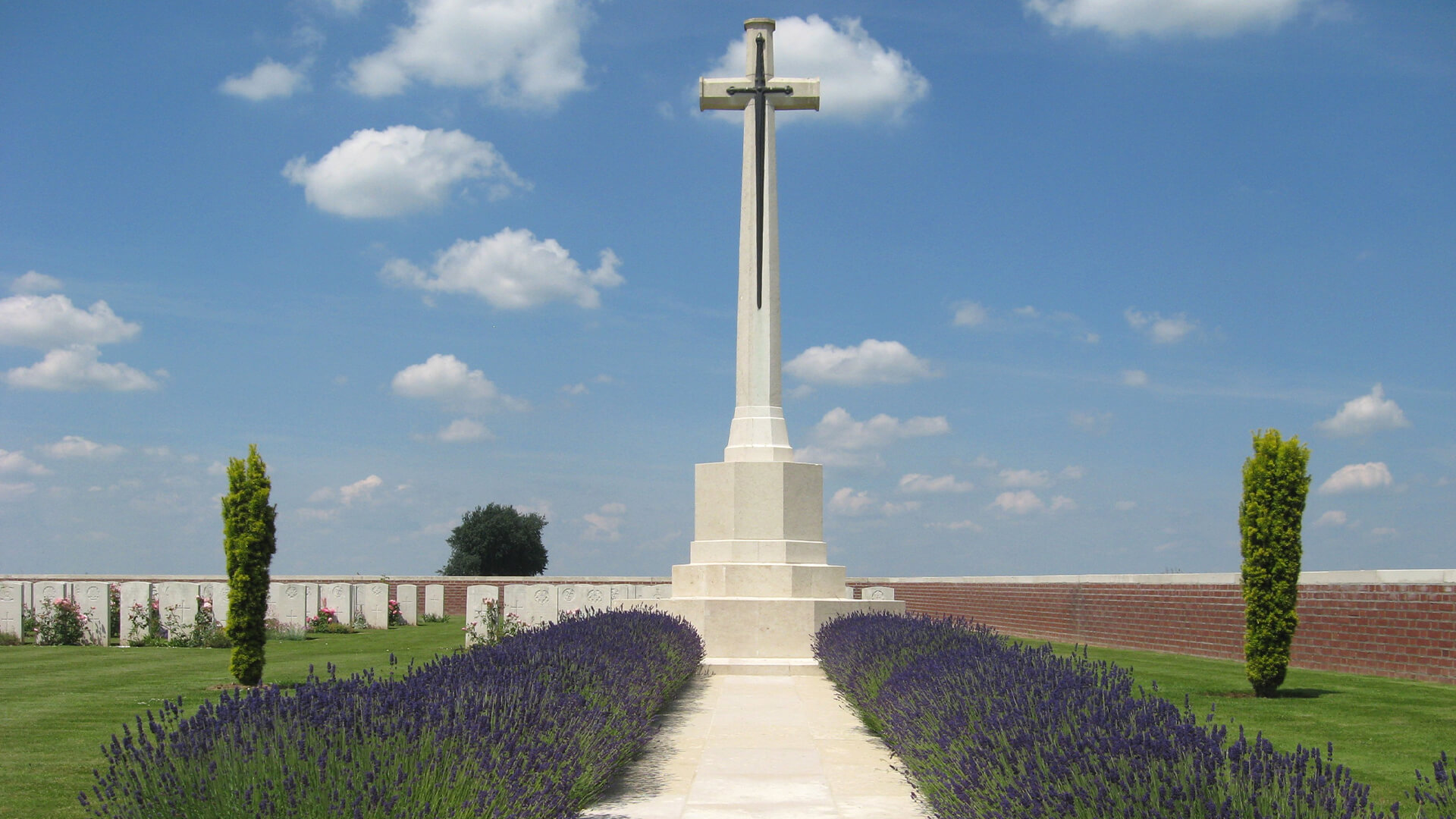 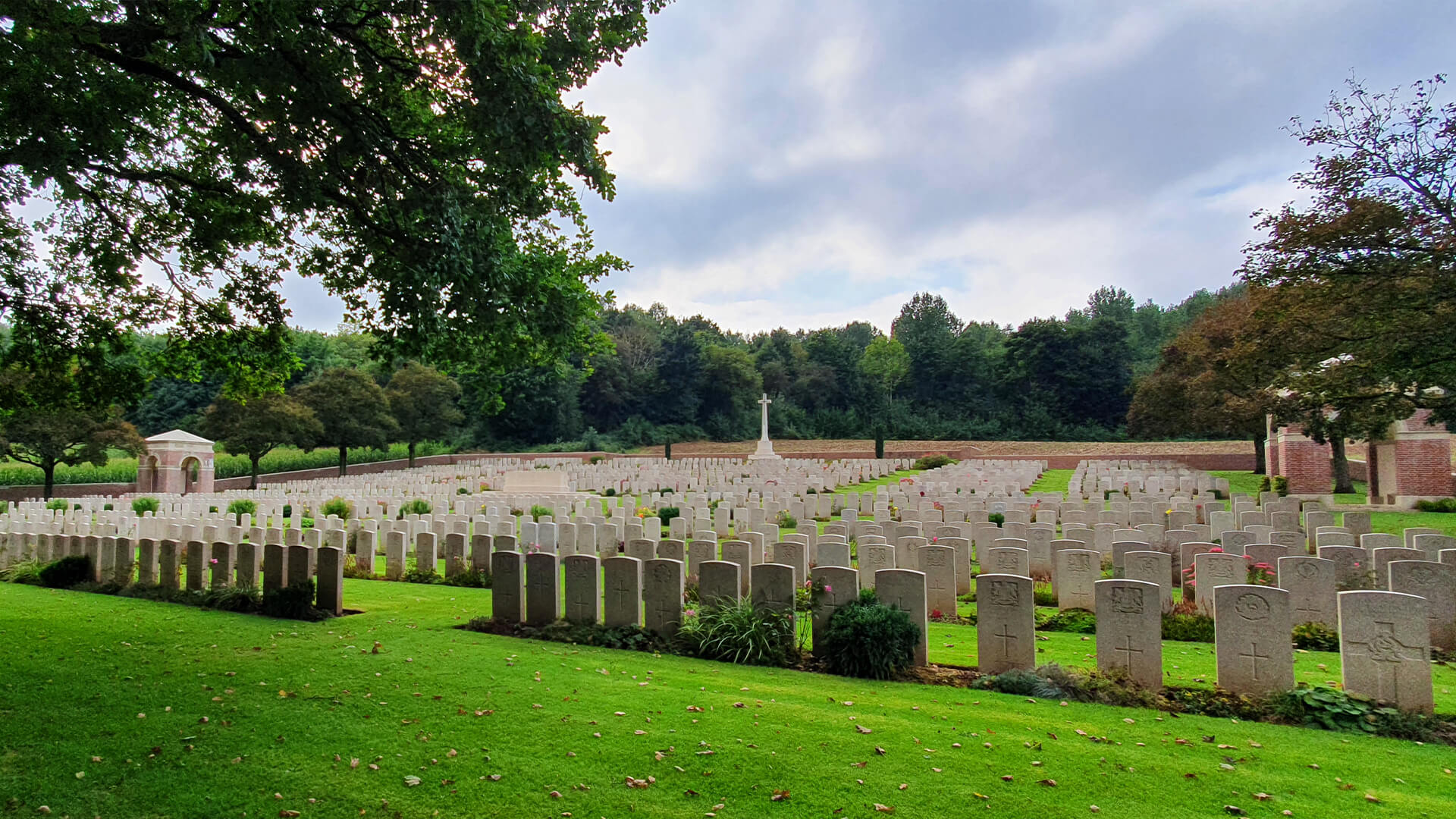 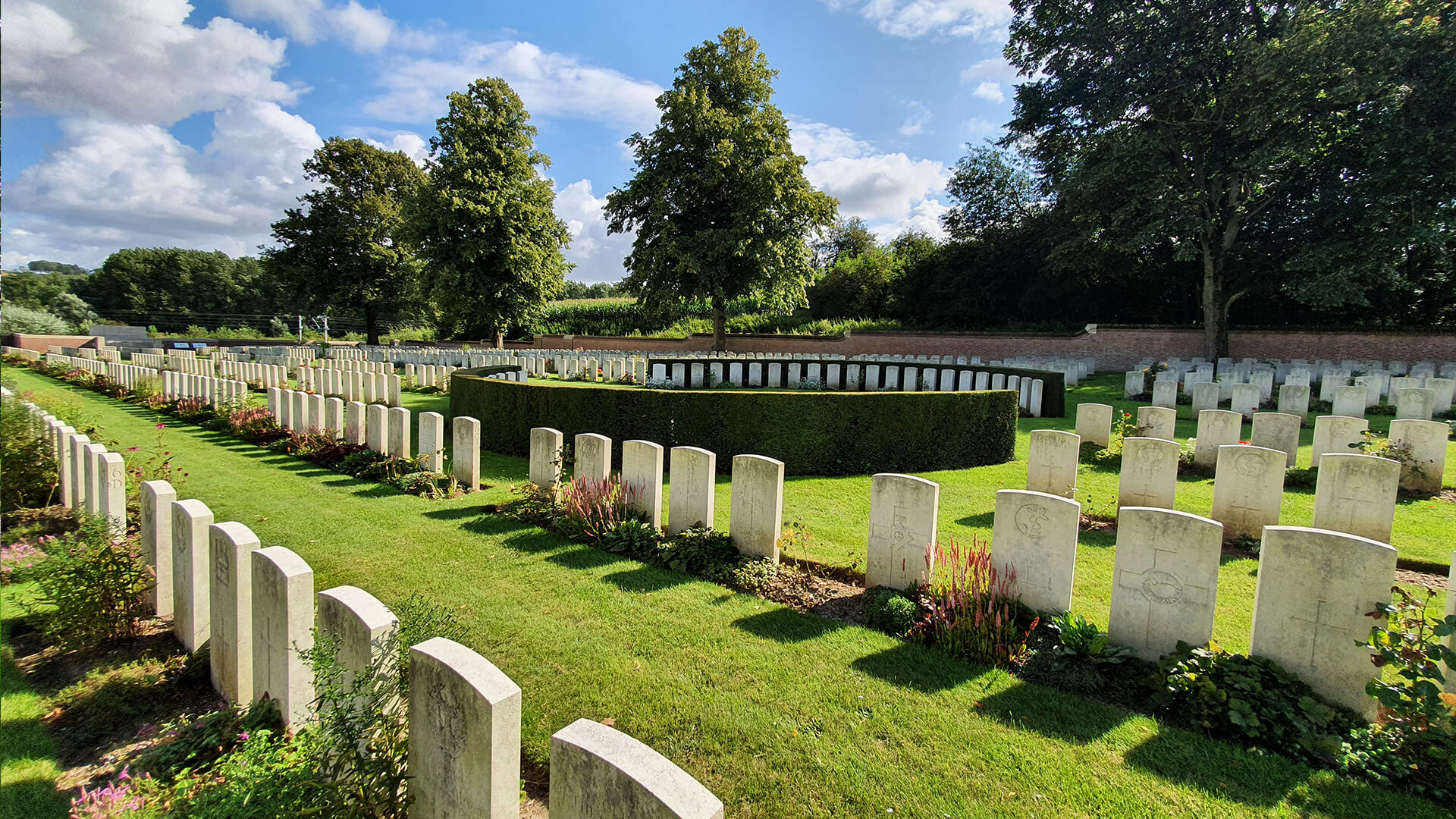 From concentration cemeteries to front-line cemeteries, this is a place like no other to discover the extent and diversity of the work of the CWGC. And if you have a taste for adventure, allow yourself to go where the road leads you and get caught up in the beauty and history of the surroundings.

If you like to see possible war graves to visit in France on a map, you can do so by hitting the ‘View as Map’ button. Then you can quickly see where everything is and find out more about CWGC’s war graves by selecting the cemetery.

Using the map feature also provides a good practical overview of the cemeteries in the location you plan to visit. In and around Beaumont-Hamel for instance, there are only a few hundred meters from one cemetery to the other. Redan Ridge Cemeteries N°1, 2 and 3 lie to the North of the village and were named after The Redan, a group of British front-line trenches from 1916. 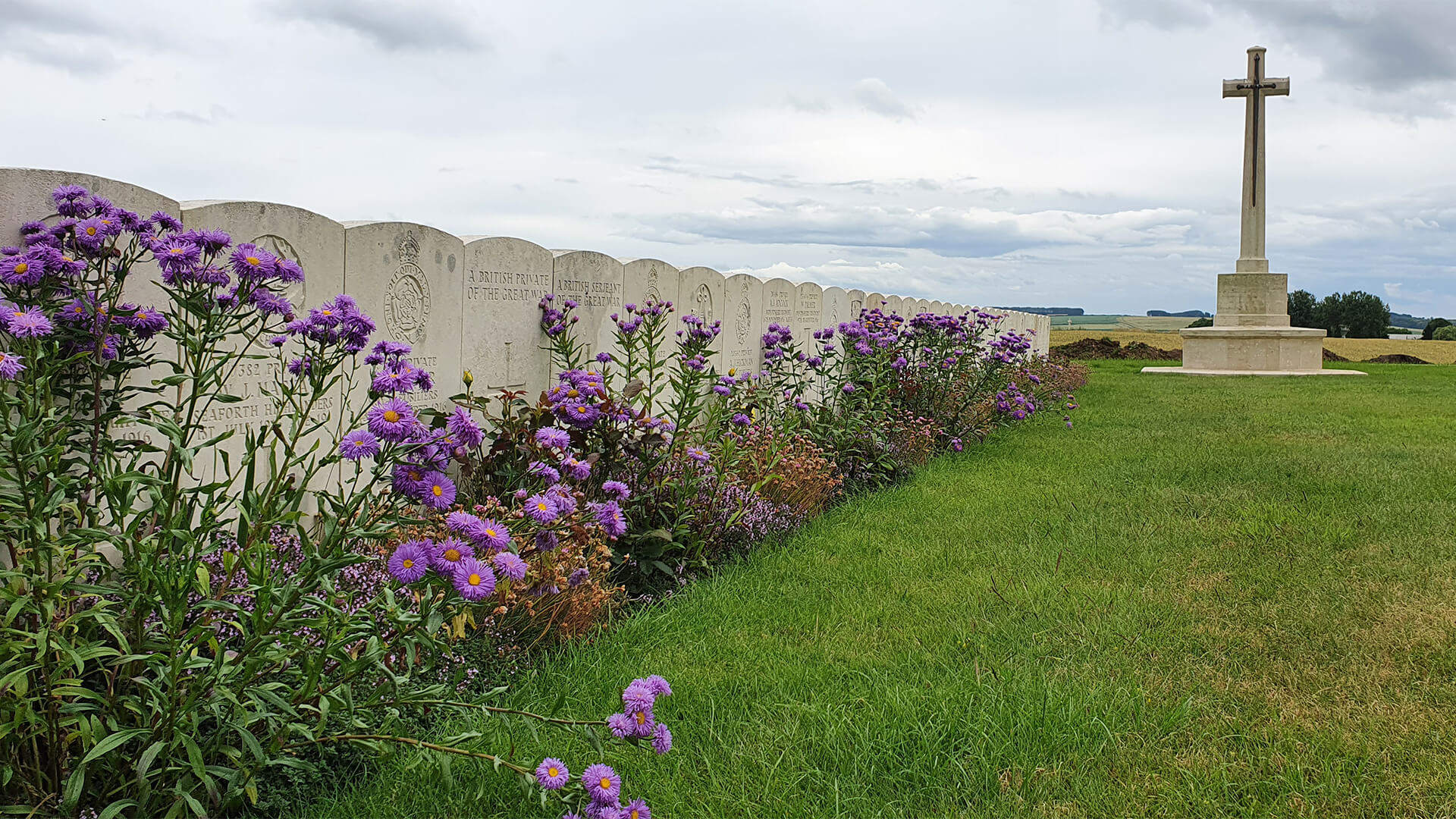 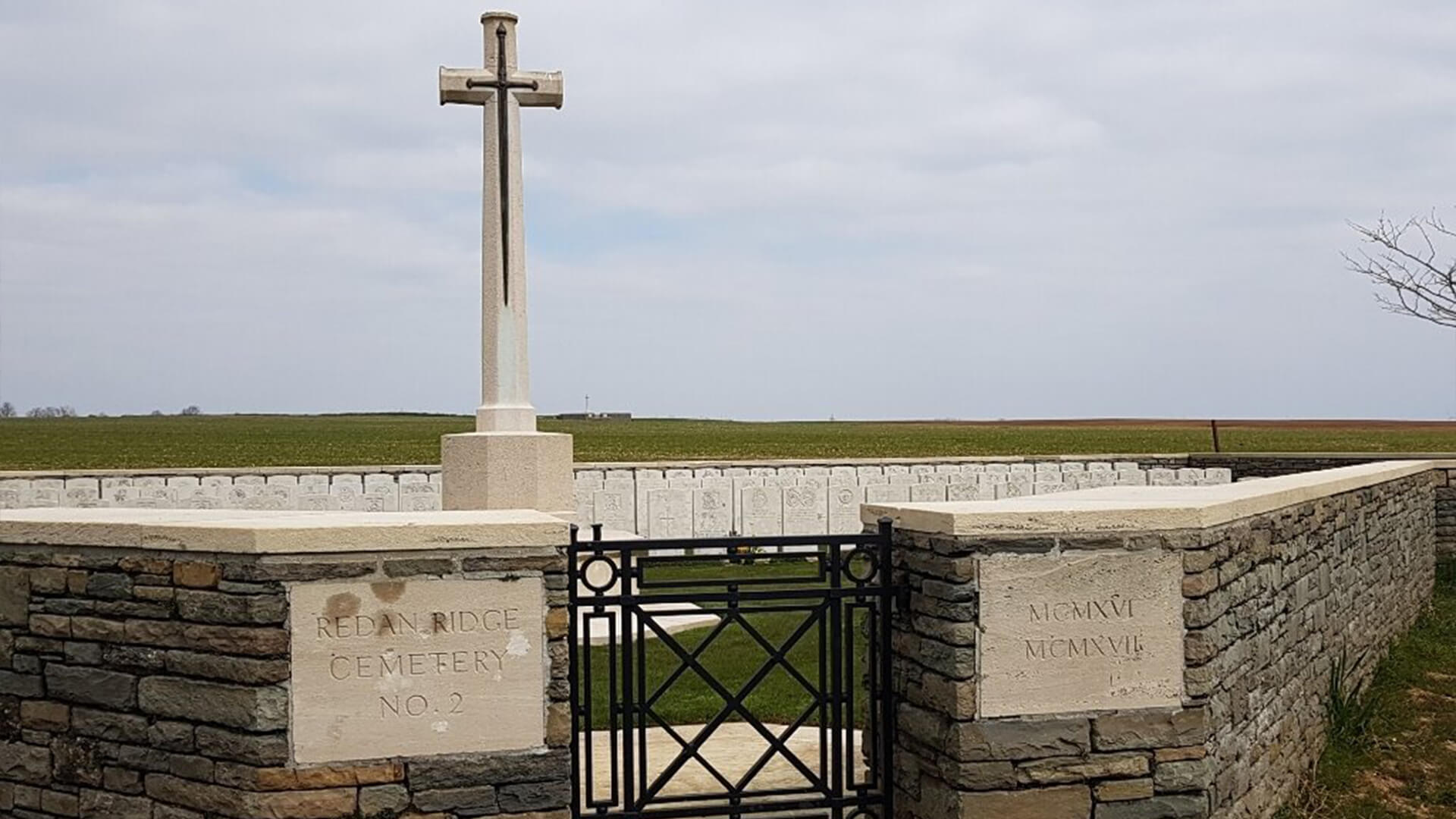 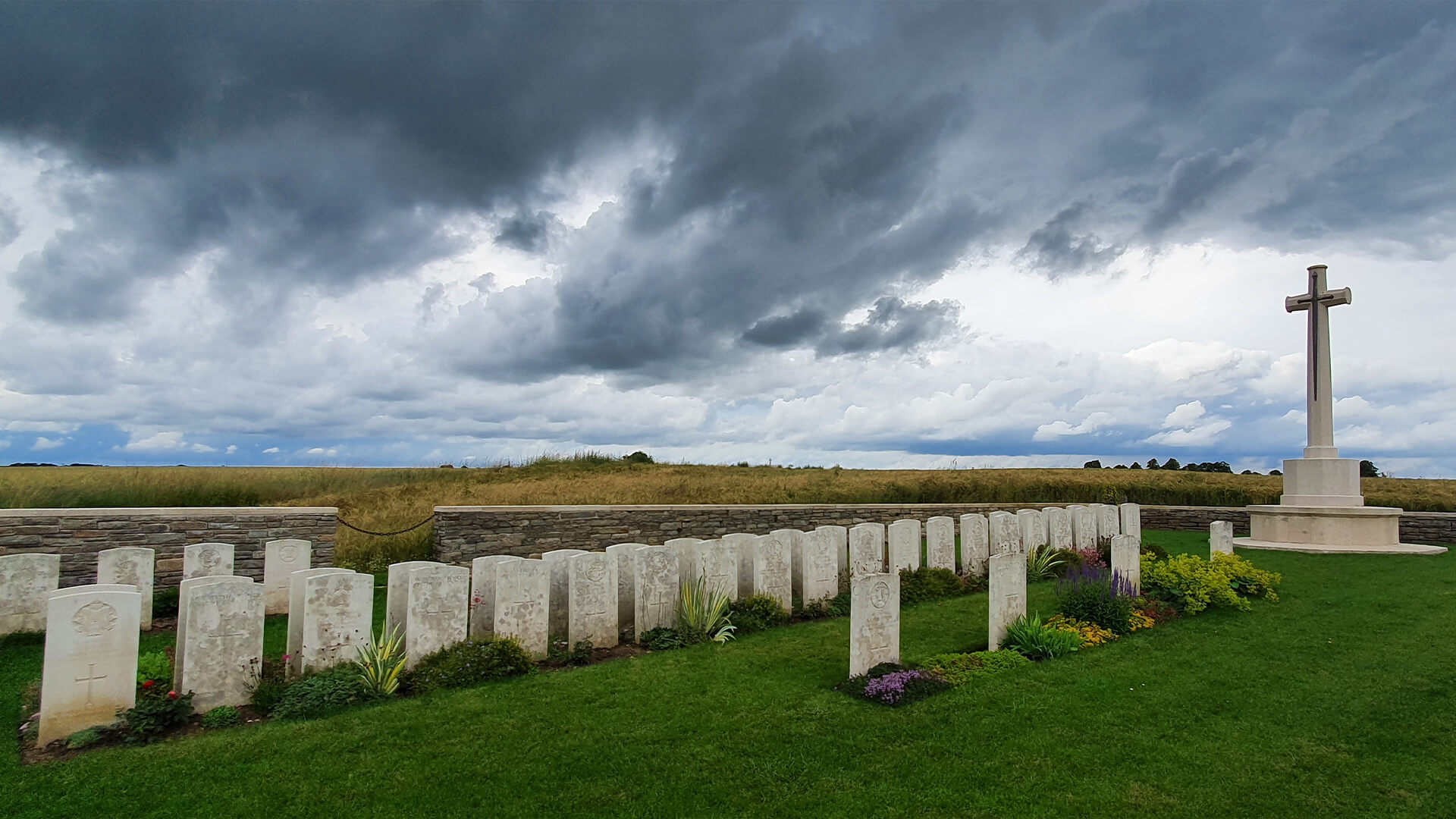 Researching the War Dead before you visit

Before you make the journey out to France you might want to do a little bit of research about a casualty buried at a particular CWGC cemetery. You can do this from the cemetery page. First, go to records and find war dead and then you’ll be able to find out more about the casualties commemorated on site. The layout of the cemetery is also available to download and will help you locate any war graves you’d like to visit at the site.

Trips to war graves in France can involve rich historical learnings and insight on those who lost their lives in WW1 and WW2. Find location information, visiting information and discover the history behind some of the key CWGC sites in France.

World War One War Graves to Visit in France

Over 530,000 Commonwealth servicemen and women died in France during World War One. With the first Battle of the Marne (1914), the Battle of the Somme (1916), The Spring Offensive and the Hundred Days Offensive (1918, among others, France was the scene of some of the bloodiest battles of the war.

Among the 1,200 cemeteries designed by the CWGC to commemorate them, is Etaples Military Cemetery. With 10,771 Commonwealth War Graves from World War One and 120 from World War Two, in Pas-de-Calais, it is the largest cemetery maintained by the CWGC in France and the second largest in the world after Tyne Cot Cemetery in Belgium.

Located near Boulogne, on the north-west coast, Etaples was home to the largest British military base and army hospital complex. It’s 20,000 beds received up to 40,000 wounded and diseased each month. Almost 2,500 women served there, and 20 of them, including nurses, army auxiliaries and civilian volunteers of the YMCA and Scottish Church Huts organisations, are commemorated there.

One of the must-see sites when you visit the Western Front is Thiepval Memorial. It is the largest CWGC Memorial to the Missing in the world. Designed by Sir Edwin Lutyens and unveiled in 1932, it bears the names of over 72,000 officers and men of the United Kingdom and South African forces who died on the Somme during World War One and have no known grave.

But most of all, it stands as one of the most dramatic symbols of the bloodiest battle the Commonwealth forces ever faced: The Battle of the Somme of 1916.

Currently closed while a renovation takes place until May 2022, you can still visit the Thiepval Anglo-French Cemetery and explore the history of this iconic site thanks to a free-to-use digital exhibition called ‘In The Shadow of Thiepval’. The exhibition can be accessed while on site using a smart phone or tablet. To access the exhibition, come to the CWGC trailer at the entrance of the memorial site and follow the instructions. 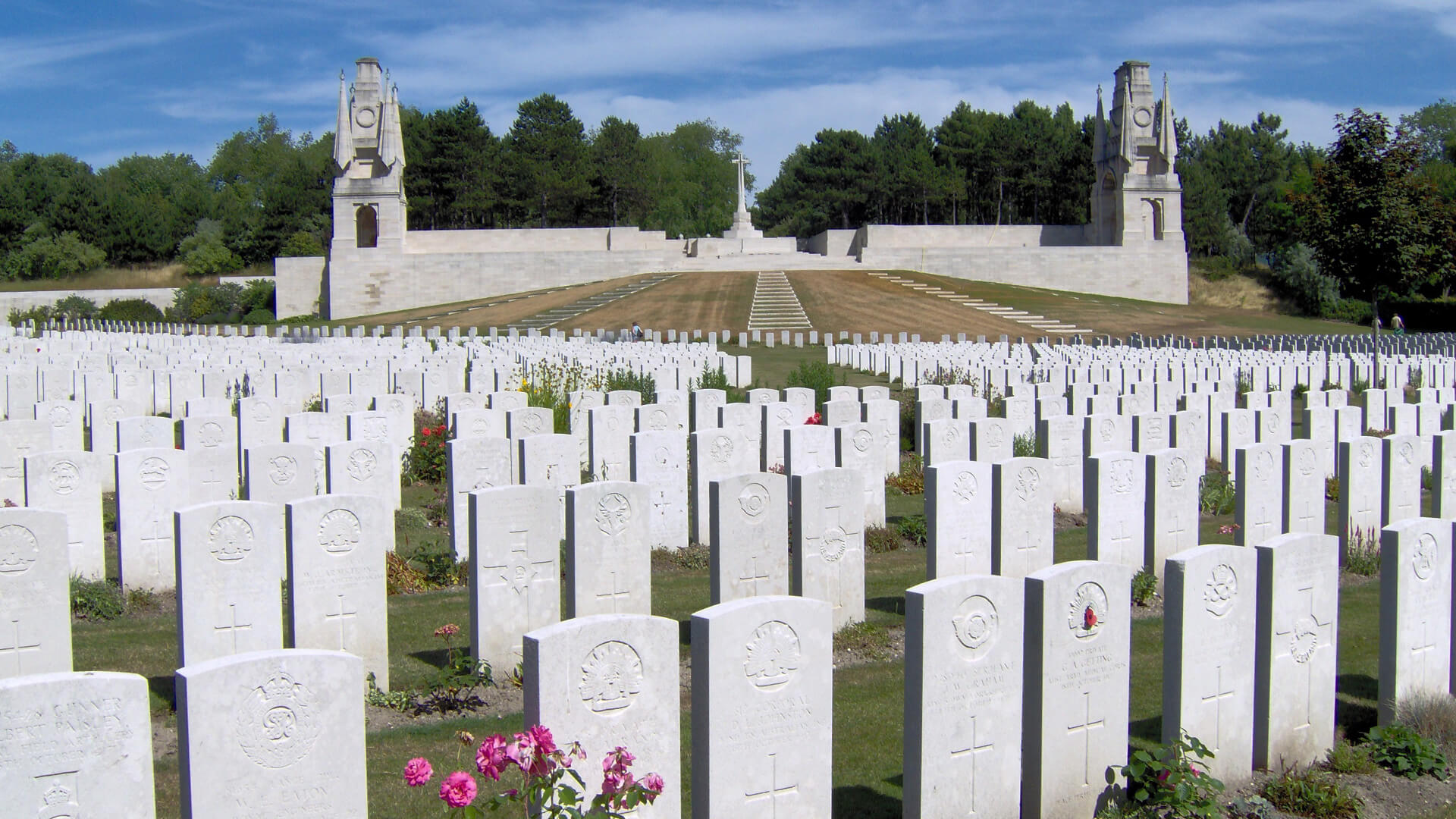 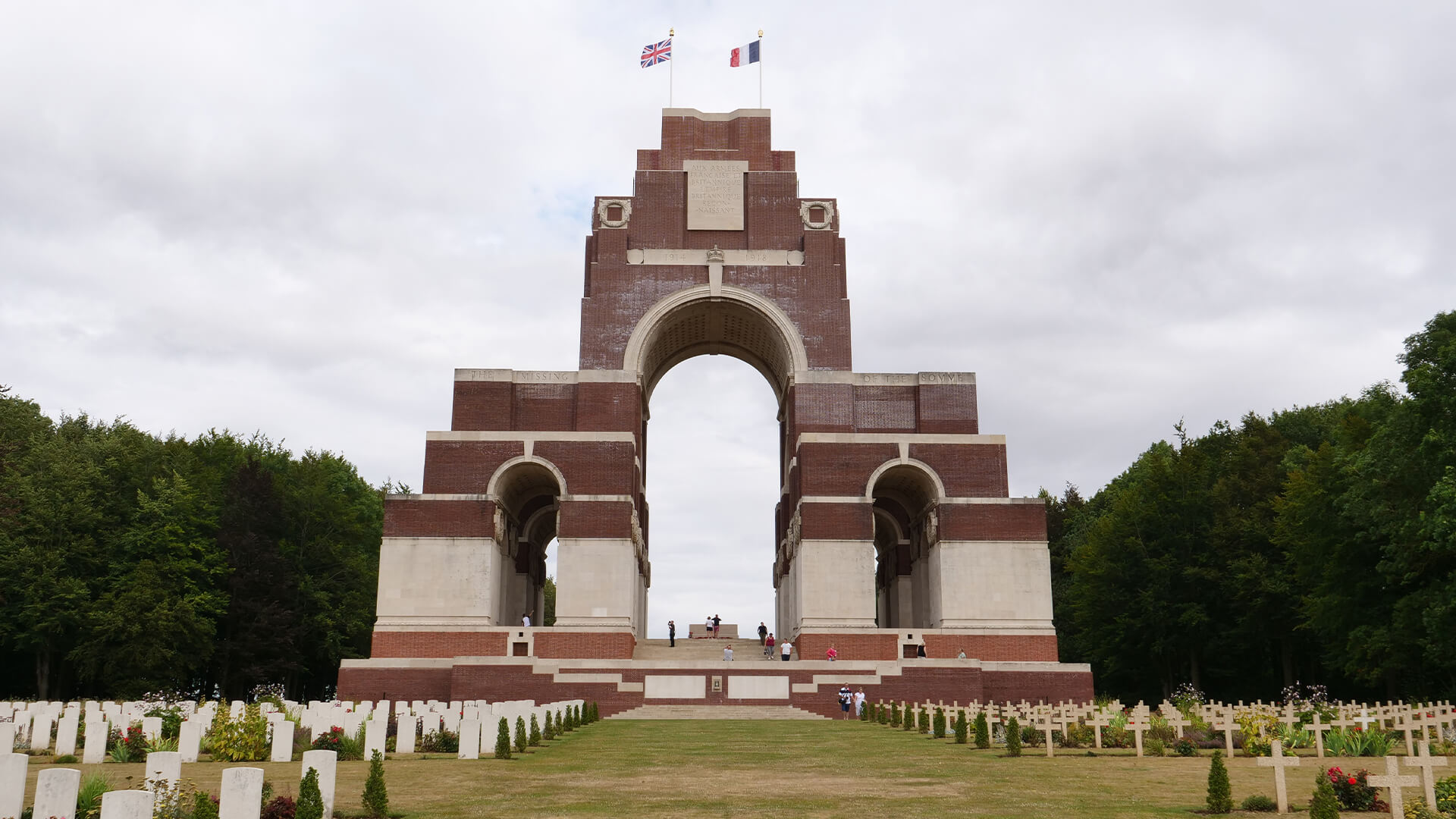 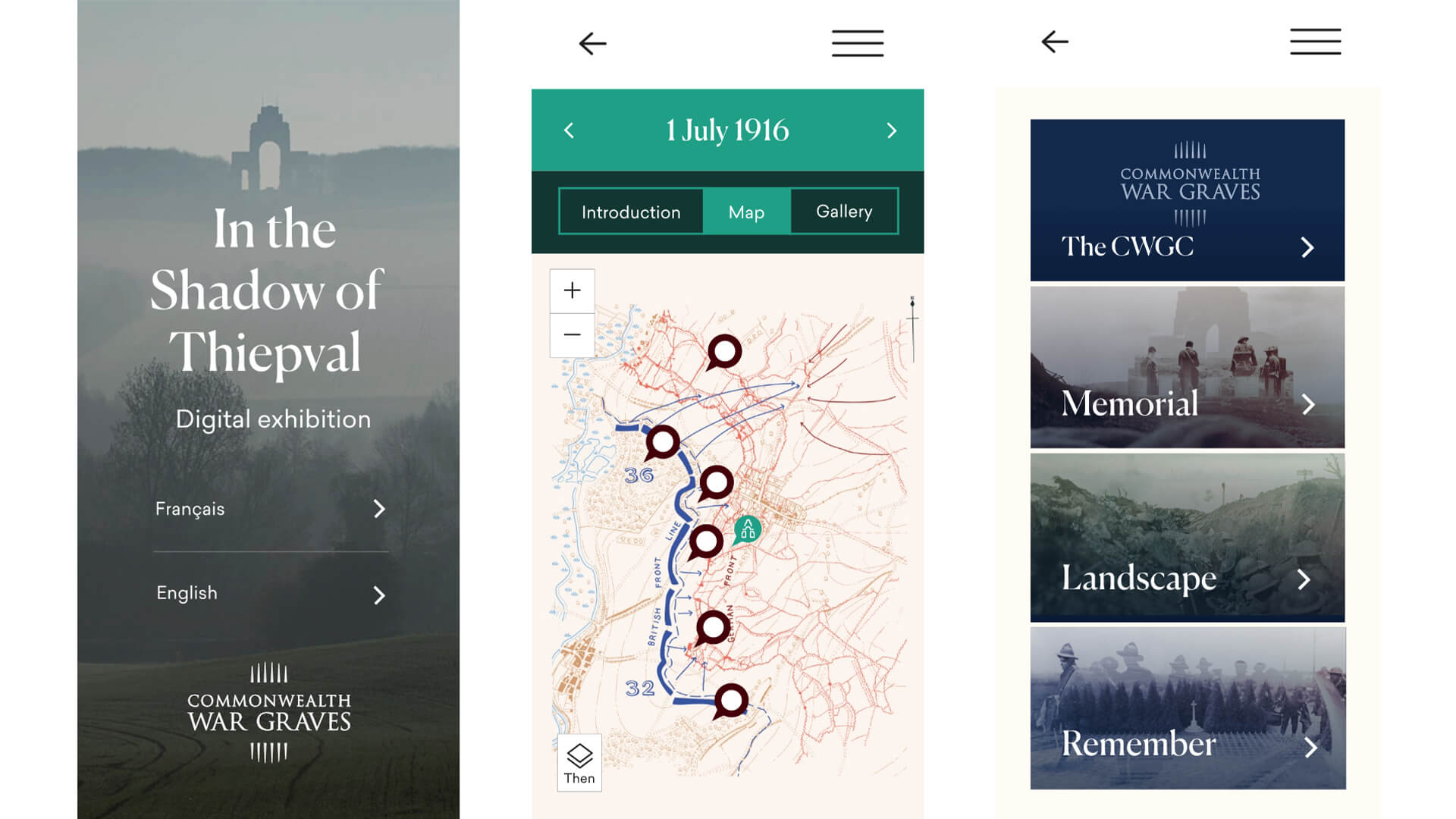 In The Shadow of Thiepval Digital Exhibition

More than 22,000 Commonwealth servicemen and women died in Normandy during World War Two. Most were killed during Operation Overlord, and the liberation of Normandy, which began on D-Day, 6 June 1944. They lie at rest in cemeteries and churchyards across the Normandy region.

Among the 18 cemeteries designed and built by CWGC across Normandy, is Jerusalem War Cemetery which, with 49 graves, is one of the smallest. Its name comes from a tiny hamlet, named Jerusalem, located near the village of Chouain. The area was the scene of bitter fighting when a German armored column sought to retake Bayeux shortly after its liberation.

The largest Commonwealth cemetery of World War Two in France is Bayeux War Cemetery and contains burials brought in from the surrounding districts and nearby hospitals. There was little actual fighting in Bayeux, although it was the first French town of importance to be liberated. 4,144 Commonwealth servicemen are buried there, among which 338 are unidentified.

The Bayeux Memorial stands opposite the cemetery and bears the names of nearly 2,000 men of the Commonwealth land forces who died in this area and have no known grave. 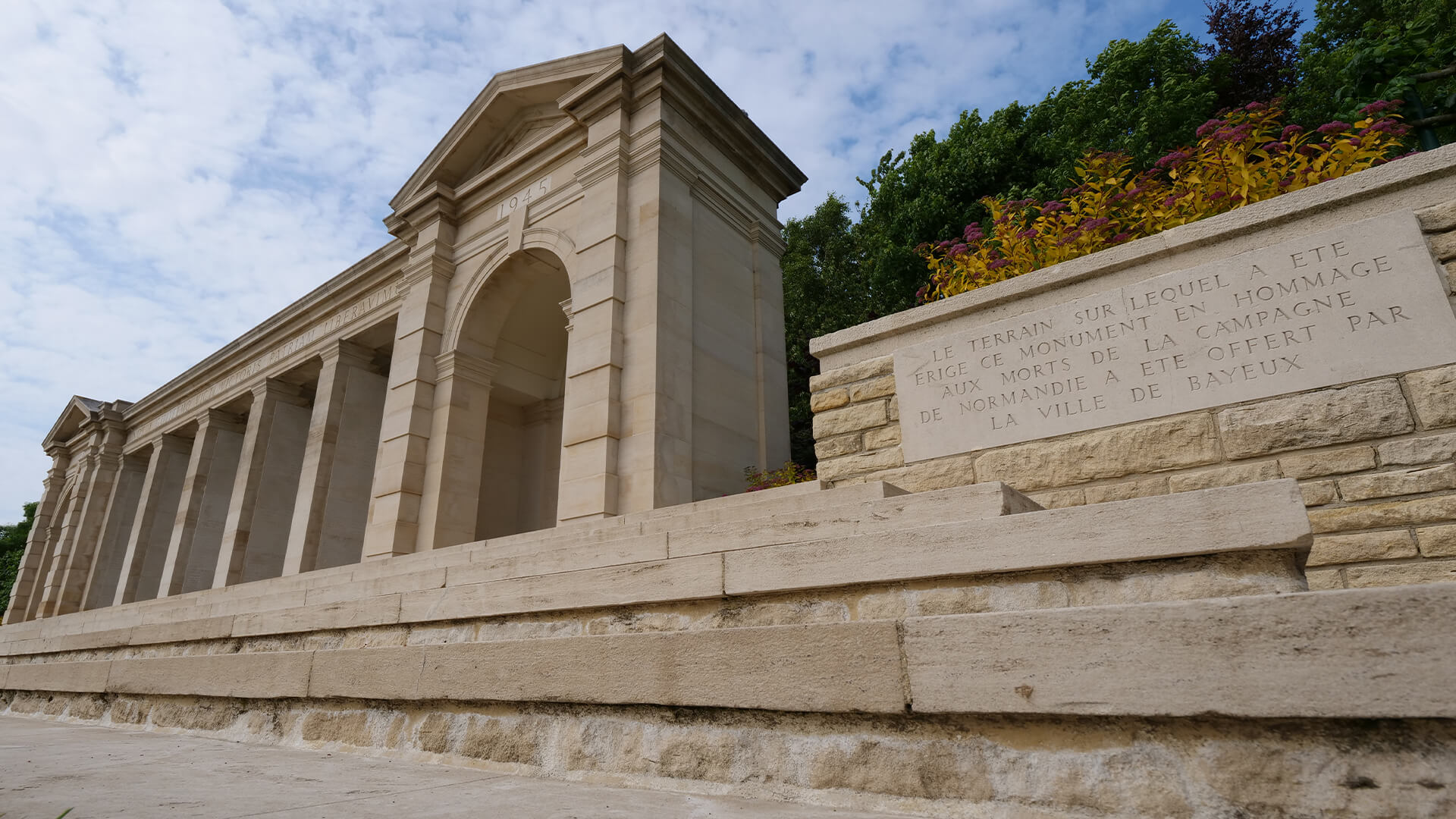 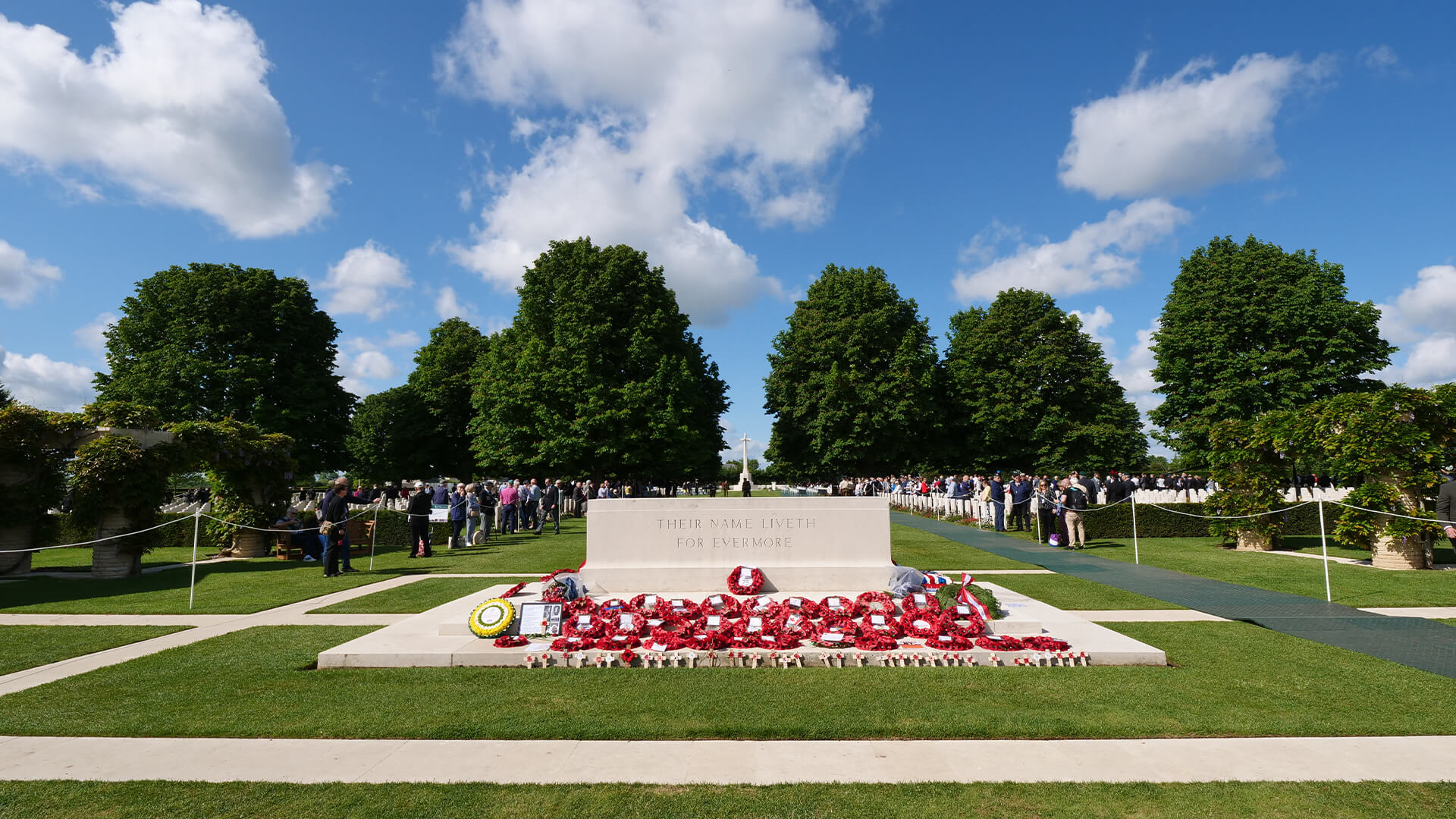 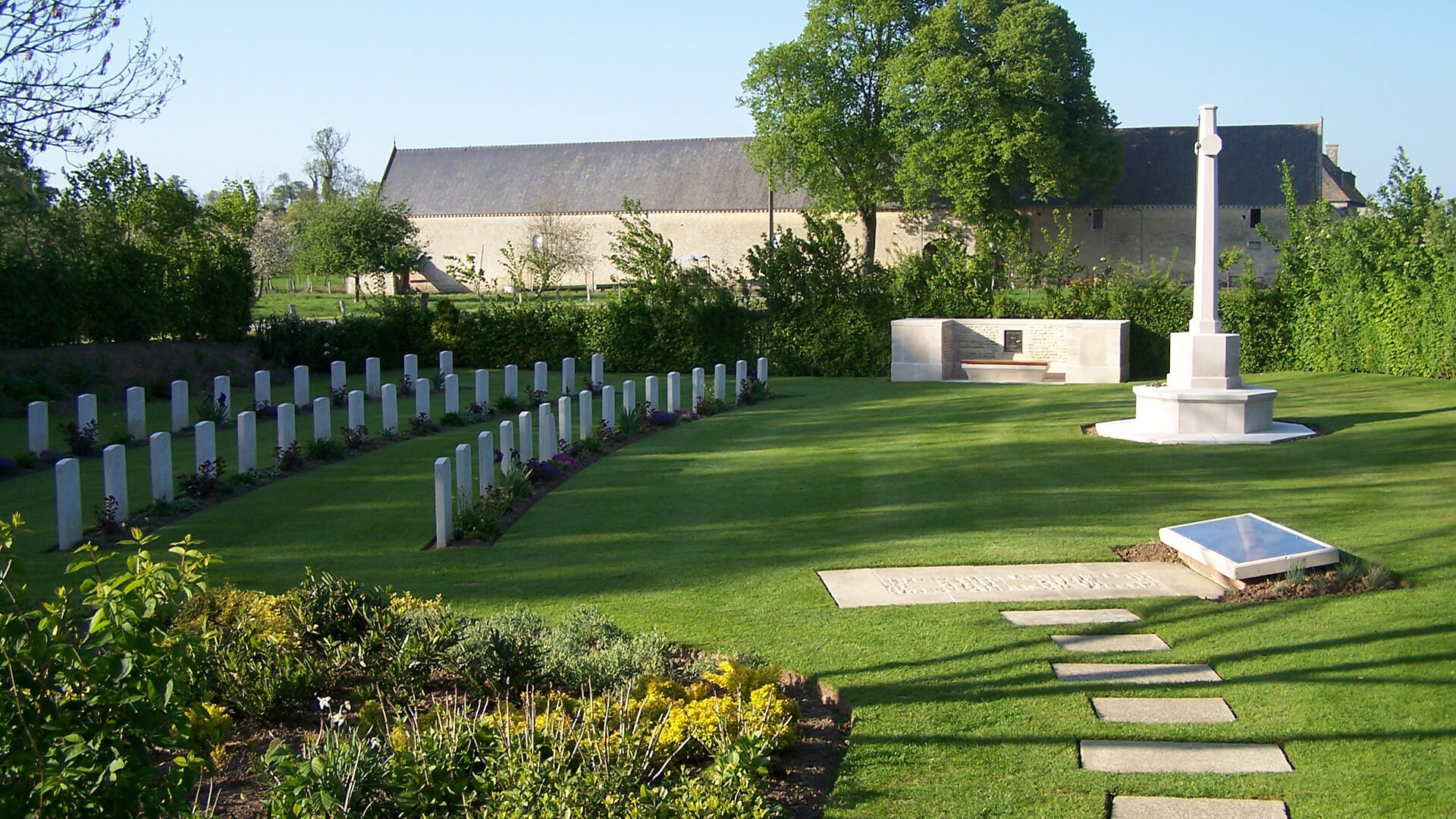 Even after more than a hundred years since the end of World War One, the landscape of Northern France still carries visible reminders of the battles. Mine and shell holes, remains of trenches, ruins, and iron harvests: the scars of the Great War are still deeply inscribed in the countryside scenery.

It is very difficult, after paying your respect to a lost one, not to let yourself be absorbed in these impactful and enduring legacies of the war. Here are a few ideas of battlefields you can visit on your journey around France.

The Lochnagar Crater, located a few kilometers at the North-East of Albert (Somme), highlights how mining was used as a military tactic during World War One. About a hundred meters wide and twenty-one meters deep, this impressive crater is the result of the detonation by British Forces of 27 tons of explosives packed into a long tunnel in the ground on 1st July 1916, marking thus the beginning of the Battle of the Somme.

The Beaumont-Hamel Newfoundland Memorial (near Albert) and The Vimy Memorial (near Arras) stand as lasting tributes to the 820 Newfoundlanders and 11,285 Canadians who were killed in France during World War One and have no known grave. In these poignant symbols of remembrance, you will have the opportunity to also explore remarkably well-preserved trench systems, which will give you a realistic idea of what the fighting must have been like.

The ruined towers of Mont-Saint-Éloi Abbey

Located only ten minutes to the North-West of Arras, is the 18th century Mont-Saint-Eloi Abbey. From its vantage point at the top of a hill, the towers of the Abbey were useful and strategic observations posts for the occupying forces, firstly the French Army from 1914 to 1915, and the Commonwealth forces from 1916 to 1918. Already damaged during the French Revolution and pillaged in the 19th century, it was also severely pounded by German artillery during World War One, which caused the destruction of the upper level.

A journey to the Western Front is not complete without a visit to The CWGC Experience. If you’ve ever wondered how the CWGC commemorates the Commonwealth casualties from World War One & Two, The CWGC Experience offers an opportunity to discover more and see our staff in action.

Located in the heart of the battlefields of The Great War, The CWGC Experience is an easy drive away from some of the most iconic locations along the Old Front Line.

From the story of how we still recover and rebury the dead today, to the skilled artisan craftsmen at work maintaining the world's most impressive and recognisable war monuments and memorials. Free audio-guides and guided tours will tell you everything you need to know about our remarkable organisation and its role in France and around the world. 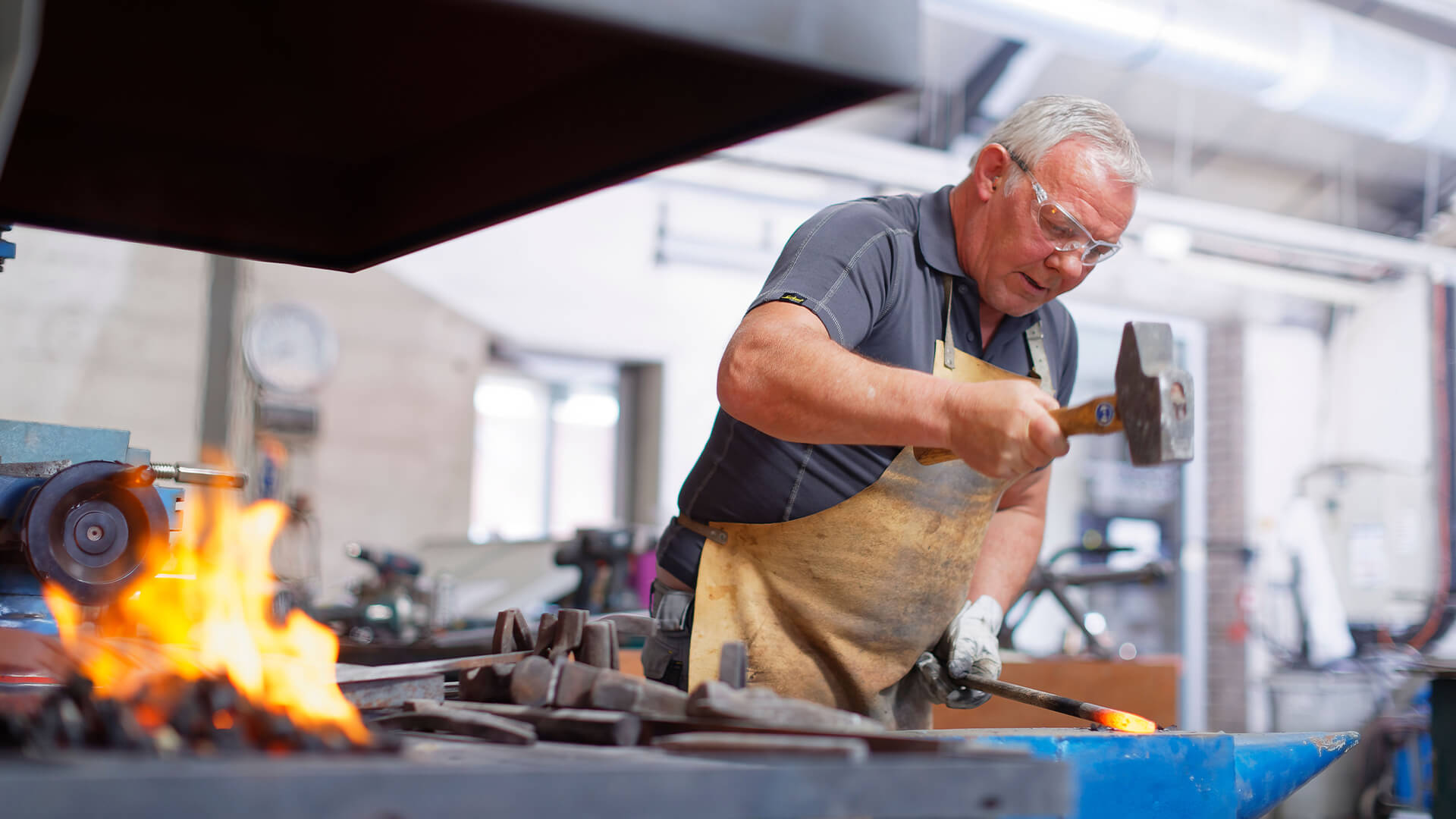 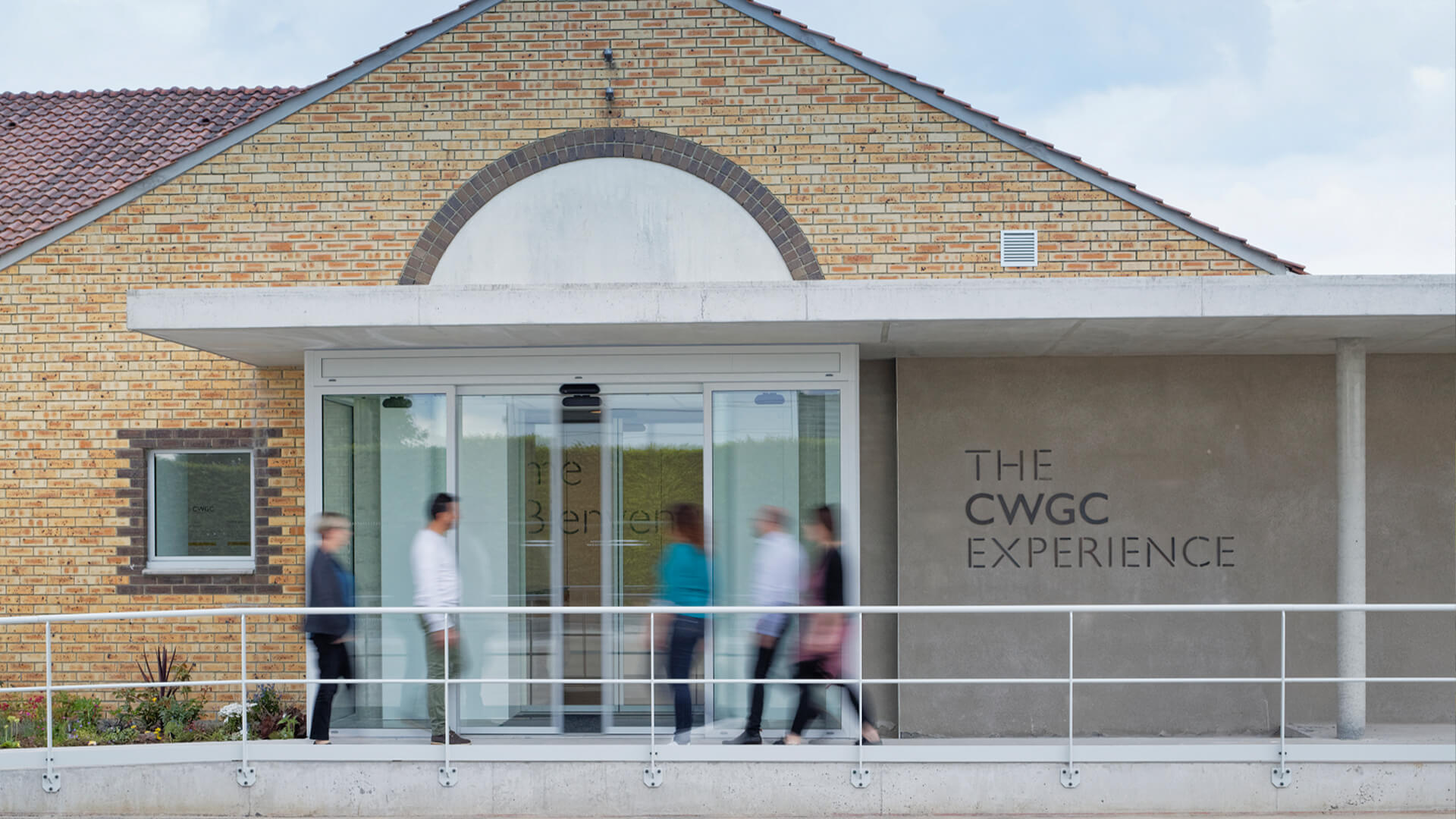 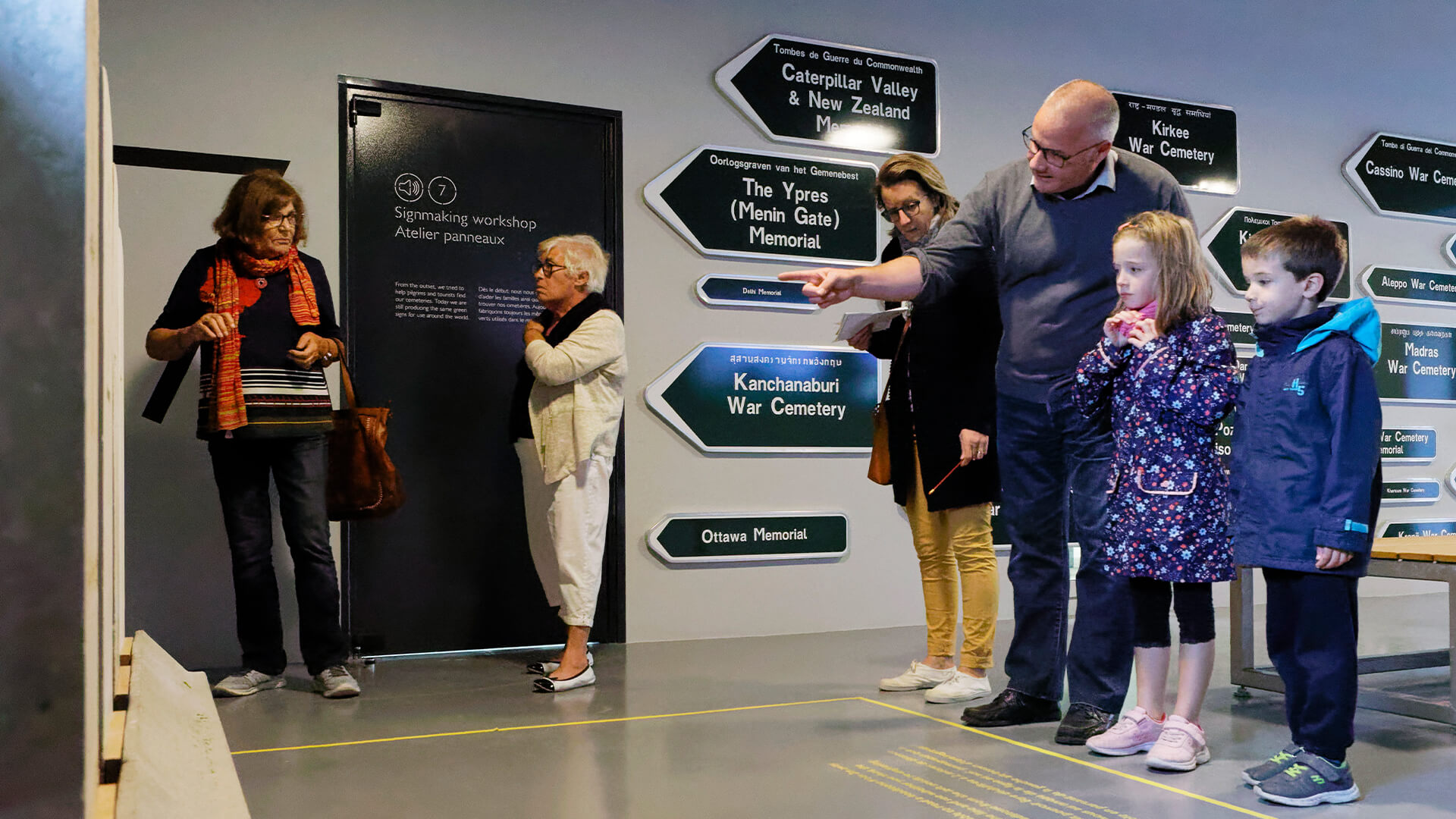