One of the things we’re most proud of at the CWGC is the fact that anyone can use our resources to find relatives who died during the world wars, discover where they are commemorated and then visit the site. Today, 105 years after the death of her great-great grandfather, CWGC Senior Public Events Coordinator Megan Maltby tells her own version of this story.

The 9th May 2020 marks 105 years since my great-great grandfather died in the First World War. In this blog post I will share his story and tell of my visit to his final place of commemoration. His story isn’t anything particularly remarkable or out of the ordinary for a soldier in the Great War but my personal connection to him has always made my work at the Commonwealth War Graves Commission feel that much more important. 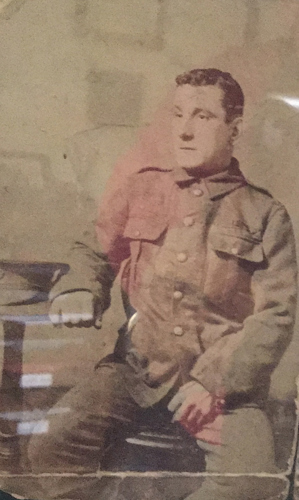 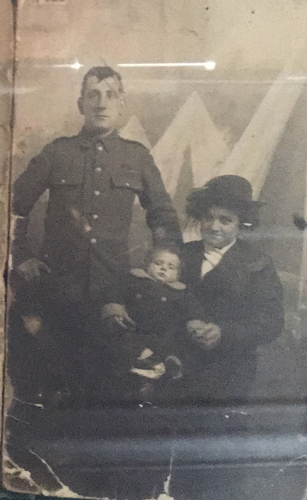 Last November, on a dreary and damp morning, I drove through the beautiful and expansive agricultural landscape of Northern France. When I got to the quintessentially French village of Le Touret, I knew I had nearly arrived at my destination. As I took in the scenery, I couldn’t help but imagine that this environment today would be almost unrecognisable to my great-great grandfather.

Pulling up in a lay by on a quiet French road, I took in the contrast of the Portland stone against the flowing fields surrounding it. I felt excited and emotional as I walked into the cemetery. My partner and I were the only people there. 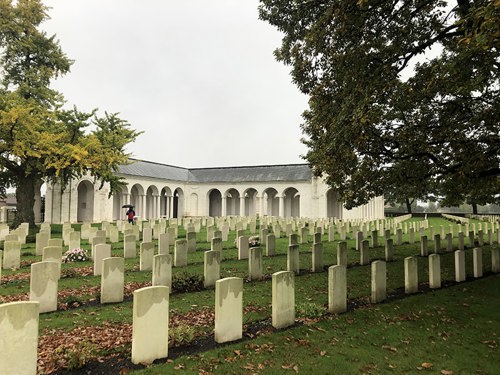 Le Touret Memorial commemorates over 13,400 British soldiers who were killed in this sector of the Western Front from the beginning of October 1914 to the eve of the Battle of Loos in late September 1915 and have no known grave.

It was designed by John Reginald Truelove and the memorial takes the form of a loggia surrounding an open rectangular court. After taking a moment to take in the site, I read the information panel which explains that almost all the men commemorated on the memorial served with regular or territorial regiments, my great-great grandfather included.

I don’t know very much about him personally, what I do know, thanks to my great uncle, is that he was in 2nd Battalion, Royal Sussex Regiment and embarked from England on 17th February 1915. The battalion War Diary records the arrival of 62 reinforcements on 21st February 1915 which I assume includes my great-great grandfather.

The action in which he was killed took place on the morning of Sunday 9 May 1915 and was the commencement of the larger Battle of Festubert. The 2nd and 5th Battalions of the Royal Sussex were brigaded together in the 2nd Infantry Brigade, and their objective was to capture the trenches and redoubts in the plain at the foot of the Aubers Ridge opposite Richebourg, and then occupy the high ground.

The ineffectiveness of the preliminary bombardment, and the devasting results of machine-gun fire, rendered the advance ineffectual. Both battalions lost some 200 killed, wounded, or missing. The casualty roll of the battalion states that Private Holman was killed in action, at Richebourg L’Avoue, on 9 May 1915. He had not yet been overseas for two months.

I had already taken a screenshot from the CWGC website of which panel his name is upon: Panel 20. I walked slowly through the memorial, attempting to take in all the names. Arriving at the far side of the memorial in the corner, I found the Royal Sussex Regiment. Scanning my eyes down to Private I see Holman R.E., Rupert Ernest Holman, son of John and Charlotte Holman and husband of Bessie Holman, my great-great grandfather.

I have fond memories as a child of visiting my Gramps (great-grandfather), always seeing what vegetables he had grown in the back garden and playing board games, bingo being a personal favourite. He passed away at the age of ninety, when I was eight years old, long before my interest in history and all the questions I now have materialised, including questions about his own service in the Second World War on the Home Guard. Maybe he wouldn’t have known the answers about his father, who had died before his second birthday or maybe he wouldn’t have wanted to talk about it anyhow. 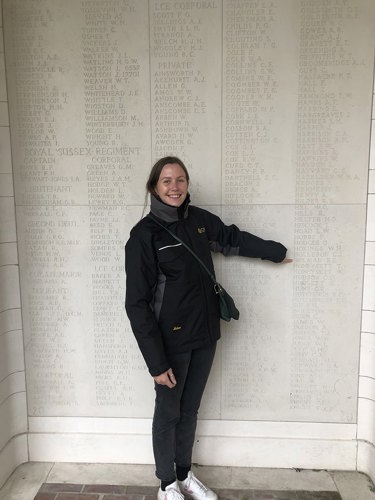 I often wonder what it would have felt like to have been my great-great grandmother, back at home in Brighton, knowing Rupert had come back from the Boer War and hoping he’d return once more. I wondered how she felt upon receiving that letter, explaining he had died and that his remains were yet to be found. I wondered how she explained this to her four children, all under the age of 10, hoping they would be able to remember their father in later life.

I was moved to tears; an experience I am sure many are familiar with upon visiting a relative’s final place of commemoration. Especially when that final place is as beautiful as this. As I reflected on the day, I wondered what it was that I found so emotional. The fact that he was just one of many who made the ultimate sacrifice, alongside my personal connection to him, was of course at the forefront of my mind. This coupled with the knowledge that the Commonwealth War Graves Commission had commemorated him and cared for the memorial long before I took the trouble to visit also played a part.

Nevertheless, the most profound part of it all, that has stayed with me today, is that as I stood in front of my great-great grandfather’s name, I thought of my Gramps and how he had stood on the exact spot I was standing on, thirty five years before me, looking at the name of the father he had barely known.