Remembering the Battle of El Alamein 80 years on

80 years ago, Allied tanks roared through the desert to smash The Desert Fox and settle the North Africa campaign. This is the story of the second battle of El Alamein.

The Battle of El Alamein 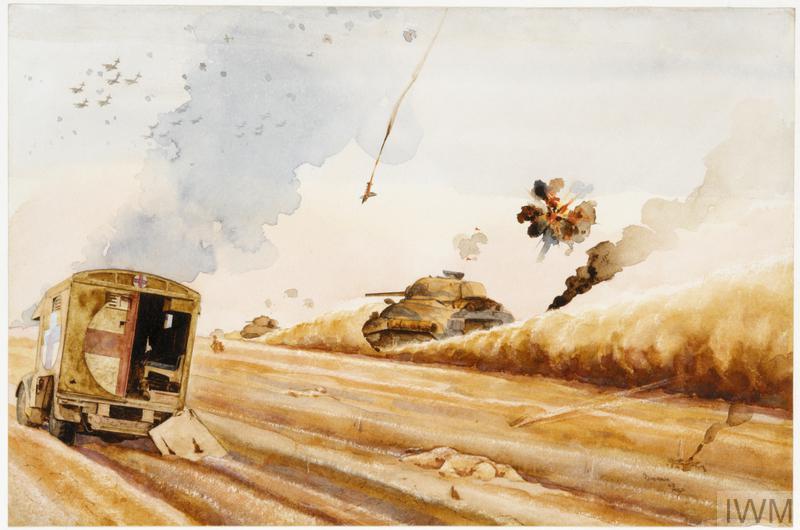 The British had been fighting in North Africa since 1940.

Italian troops under the direction of Fascist leader Benito Mussolini had launched an invasion of Egypt, then a British Protectorate, in September 1940. Italian troops had seized Ethiopia after a protracted war in 1937 and had taken Libya some two decades earlier.

British imperial troops, including ANZAC forces, smashed the Italians in numerous campaigns, including the capture of the important port city Tobruk in January 1941.

The defeat of his Italian allies, coupled with an unhealthy obsession with the Mediterranean theatre, forced Nazi Germany leader Adolf Hitler into action. 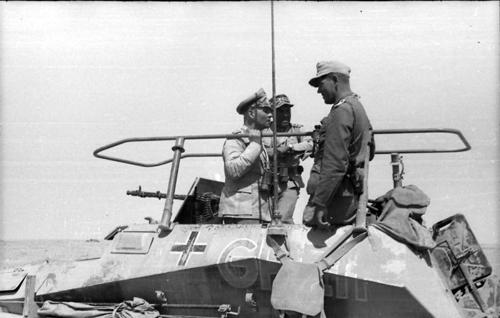 The Afrika Korps would prove much stiffer opposition than the Italian army. It came with fresh tanks, aircraft, and experienced troops. Its commander, Erwin Rommel, had earned his spurs as a daring commander with a flair for tank warfare.

During his time in North Africa, Rommel would earn the nickname “The Desert Fox” for his cunning ability to seemingly outwit the British at every turn.

Early success would catch the British troops in North Africa on the back foot and soon began a protracted period of losses for the British.

Tobruk, which was under siege for the majority of 1941, was relieved under Operation Crusader in November. The vital Libyan port fell in June 1942, leaving the British heavily demoralised.

Further setbacks would come for the British.

Following a dramatic defeat at Gazala, Libya, in June 1942, the British and Commonwealth forces under 8th Army had been pushed back into Egypt.

The First Battle of El Alamein: Stalemate in the desert

The first El Alamein clash came in July 1942. The British 8th Army had suffered a bitter defeat in Gazala, Libya, in June. Rommel had pushed the British and Commonwealth Troops back into Egypt.

Then Commander-in-Chief Middle East General Claude Auchinleck made his stand at El Alamein. 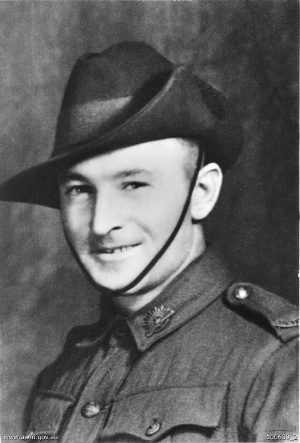 Across a month of fierce fighting, British imperial forces, featuring Australian, Indian, South African, and New Zealand troops, managed to stall Rommel’s advance and push him back. A counterattack failed to repulse the Germans entirely. Stalemate set in.

Roughly 13,250 Commonwealth and British soldiers were killed, captured, or wounded during the First Battle of El Alamein. Among their number was Victoria Cross winner Private Alfred Stan Gurney of the 2/48th South Australian Battalion.

Private Gurney was awarded the British military’s highest honour for gallantry in action during fighting near Tel-el-Eisa. With his comrades taking heavy casualties, charged the nearest machine-gun position with his bayonet, silencing the gun.

He was then struck down by a grenade but picked himself up to charge the German frontline once more. He was last seen alive charging a third machine-gun nest. His comrades later found his body. Stan, as he was known, now rests with the war dead in our El Alamein Cemetery.

The Second Battle of El Alamein: Monty breaks out

Despite stopping Rommel in his tracks, Auchinleck was relieved of command in early August. His replacement would be General Bernard Montgomery: the man who would finally kick the Axis out of North Africa once and for all. 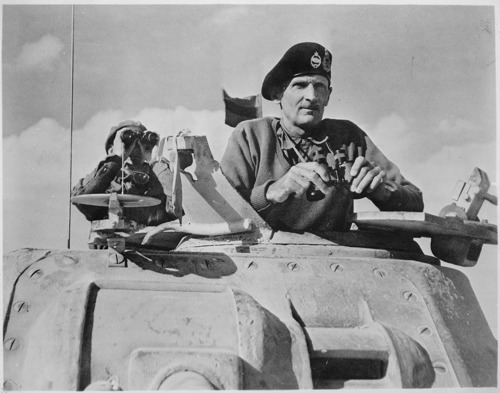 It was an inspired appointment. Monty as he was known, though something of a brash, unrefined character, was a man of high energy and consummate military skill.

He reorganised 8th Army, bringing in new generals and reinforcements.

Monty was full of fighting talk and pluck. The men responded well, quickly morphing the Desert Rats into a confident attacking force.

Rommel, whose supply situation was steadily worsening thanks to Allied success in the Mediterranean, knew time was running short. A major British offensive was on the way.

At the Battle of Alam Halfa between 30th August-7th September, Rommel attempted another attack. The 8th Army, coordinated with the RAF Desert Air Force, stood its ground and repelled the Axis troops once more.

Rommel fell ill on 23rd September and was flown back to Germany. During that time, General Montgomery spent time planning and reinforcing his army for what would become the Second Battle of El Alamein.

The operation to beat back the Axis forces commenced with an ear-splitting artillery barrage on the night of October 23rd. Operation Lightfoot was a go. 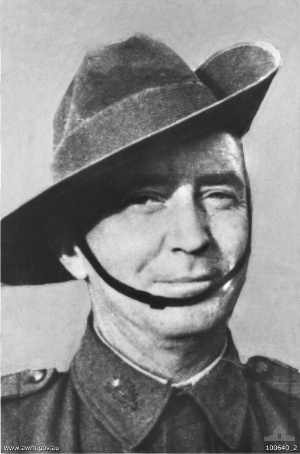 The selfless sacrifice of the men fighting at El Alamein and their superhuman efforts is reflected in the actions of VC winner Percy Gratwick.

Gratwick charged headlong into a German machine-gun nest, disabling it with grenades, before attacking and overcoming a mortar pit – all singlehanded.

Under heavy fire, he charged a second post and disabled that too before finally falling. His actions saved many of his comrade’s lives. Percy Gratwick now rests in the El Alamein Commonwealth Cemetery.

Rommel returned to the front on October 25th with the battle still raging. His reserves of petrol were short. His men were exhausted. Casualties were heavy. The Desert Fox could see the tide turning.

Operation Supercharge would be the final nail in the Axis coffin at El Alamein. An armoured thrust, Supercharge saw hundreds of British tanks swarm across the desert, starting with a night attack on November 1st. This armoured fist smashed into German lines, breaking their resistance.

A leaked note from Afrika Korps command with Rommel admitting his army was facing annihilation was intercepted by the British on the 2nd of November. It was in Monty’s hands that very night.

By the 4th of November, the Axis army was in full retreat. General Montgomery and the Desert Rats had chased the Desert Fox out of Egypt. The tide had started to turn in North Africa. 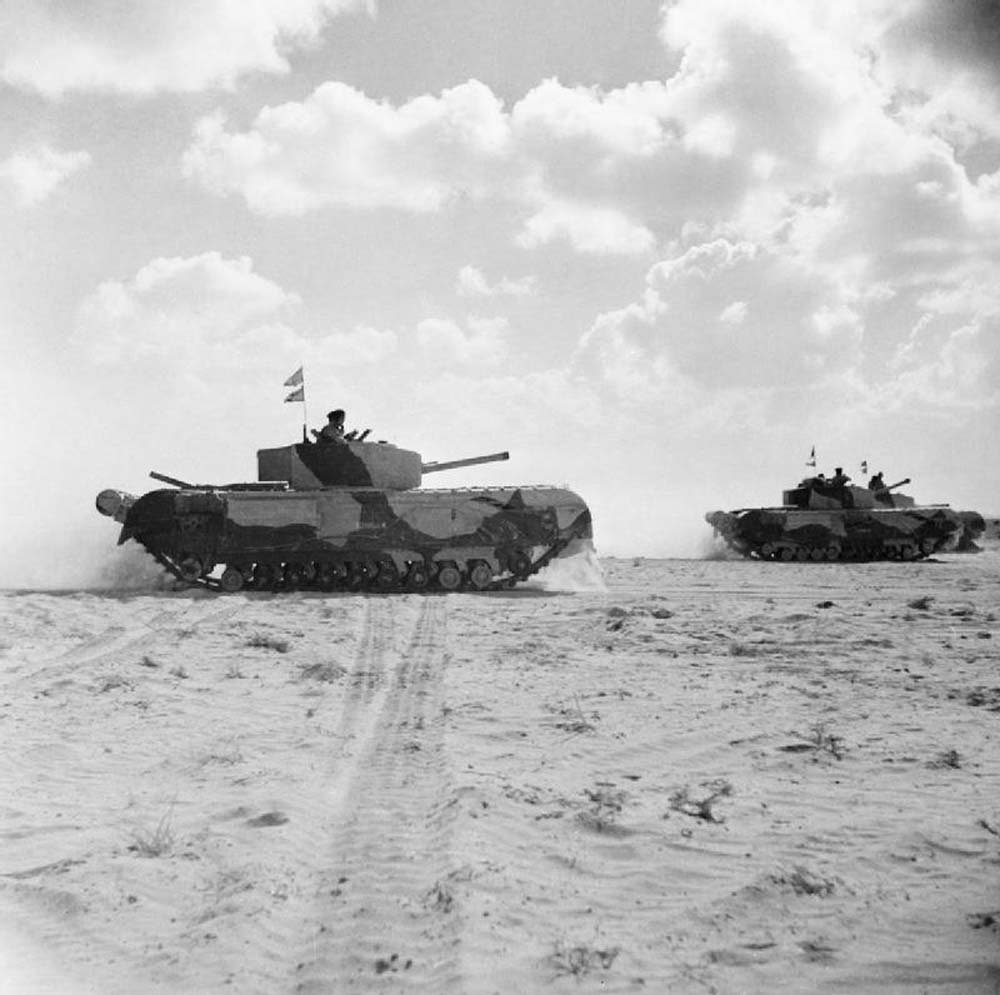 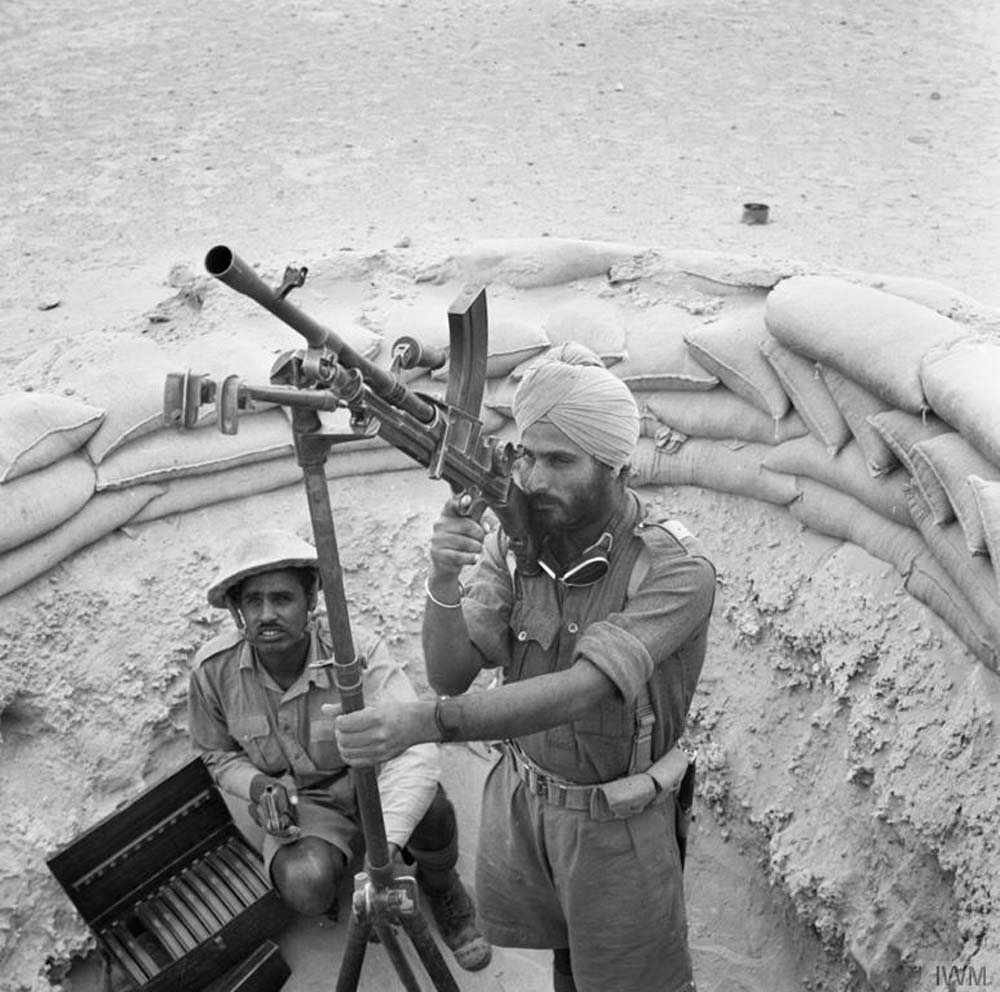 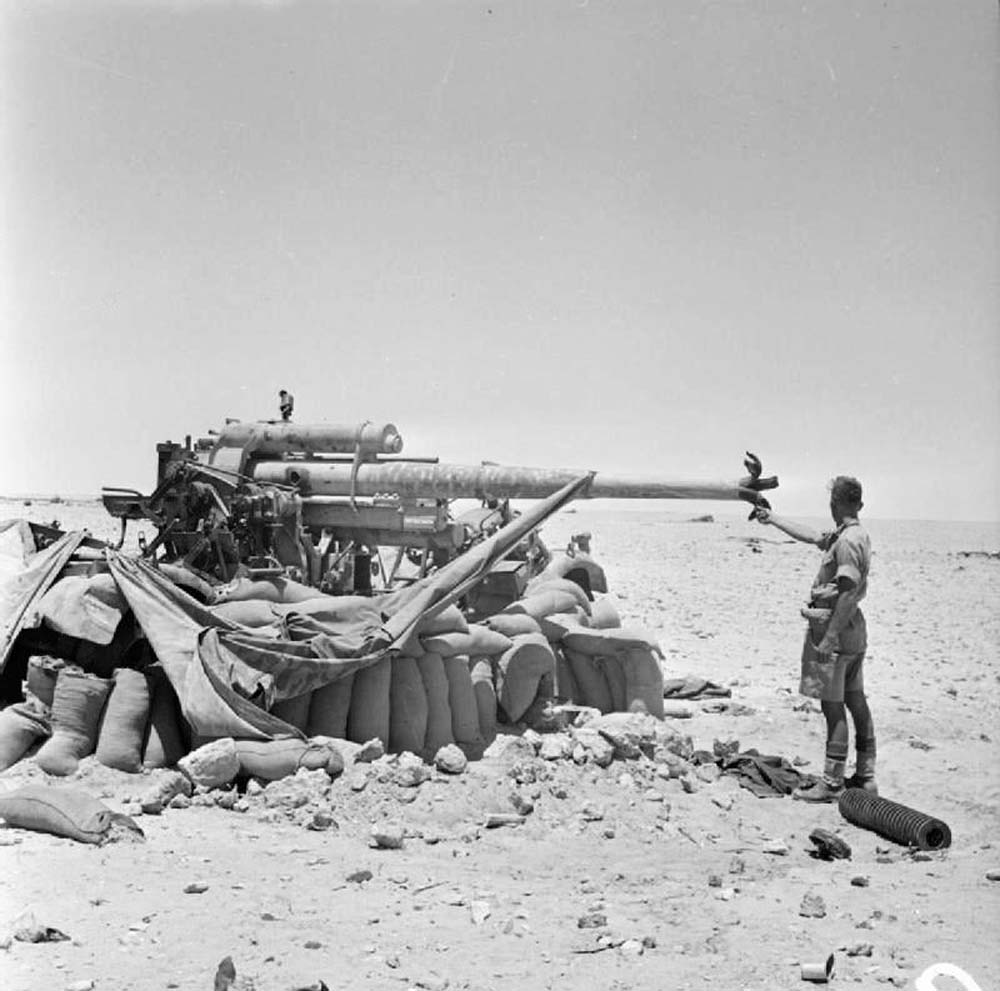 Why was El Alamein a Second World War turning point?

The Second Battle of El Alamein marked the first time British and Commonwealth forces had defeated the Axis, in particular the Germans, in a pitched land battle. After the defeats in France, Greece, Singapore, and Norway, it was an astonishing military and morale victory. 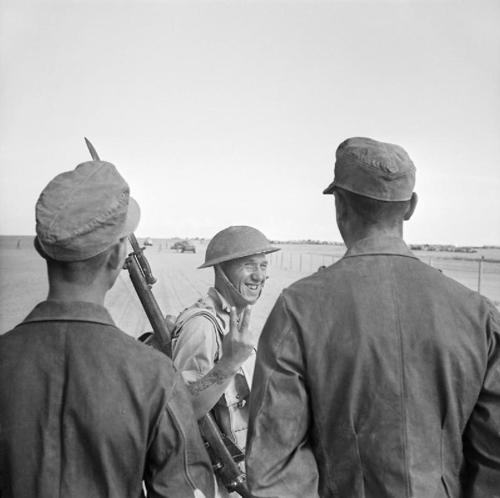 It also encouraged the Free French to join the fighting in North Africa. Another outcome was a strengthening of British control over the Mediterranean, keeping crucial fuel supply lines open.

The Allies would be able to launch a successful invasion of Sicily in 1943, putting more pressure on Axis forces in the run-up to D-Day in June 1944.

British Prime Minister Winston Churchill described the victory at El Alamein as "…not the end. It is not even the beginning of the end. But it is, perhaps, the end of the beginning".

After the war ended, Churchill also noted that, after El Alamein, the Allies never again experienced a crushing defeat during the war. There were setbacks of course, such as Operation Market Garden, but their scale was much lower when compared to Gazala or Tobruk.

A line in the sand had been drawn. A major victory had been won.

Commemorating the soldiers of El Alamein

Over 26,000 Commonwealth soldiers were killed or wounded in the two El Alamein battles.

Following the legacy laid down by the Commission following the First World War, those who fell would be remembered and laid to rest in carefully maintained cemeteries or commemorated via appropriate memorials.

Sir Hubert J. Worthington was tasked with designing the El Alamein Cemetery. His brief required a site to a road or town for easy visitor access. All of Worthington’s planning and design work was undertaken while the Second World War was still raging, but fortunately, the British and Allied victory in North Africa in 1943 meant selecting a location wasn’t impeded by a rogue German army.

Worthington also specified access to water so cemetery plant life could stay luscious and green. Any newly built cemetery would have to accommodate the desert’s shifting sands too. High walls were a must. 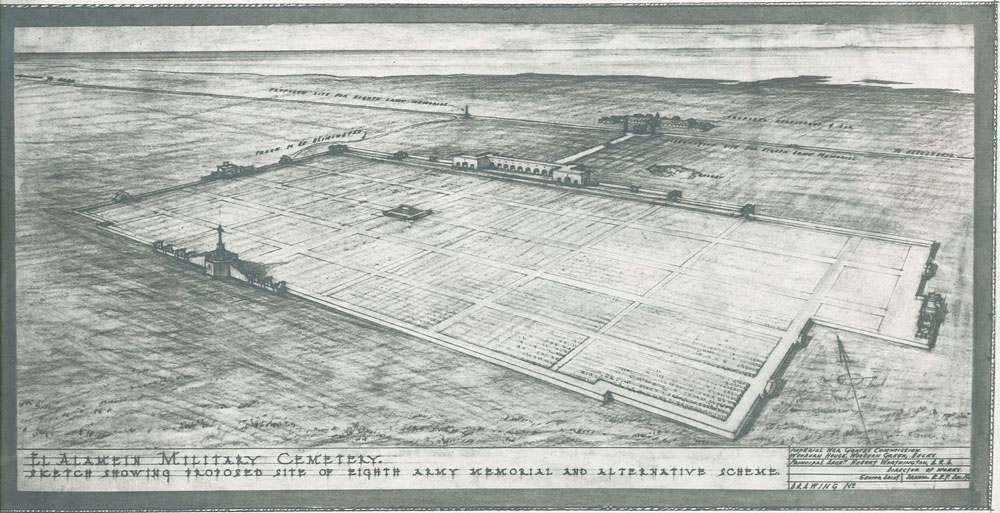 In the end, the Commission settled on the only real option for the valorous dead: a site close to El Alamein itself. There, they could rest for all eternity, safe in the knowledge their sacrifice contributed greatly towards the final Allied victory in the Second World War.

On the 75th Anniversary of the El Alamein battles, a commemorative event was held at the cemetery.

At the time, His Excellency Ambassador John Casson said: “Today former enemies have come together to reflect on the past and remember the sacrifices made 75 years ago. We now stand together, in partnership with Egypt, in order to build a prosperous and democratic future.’’ 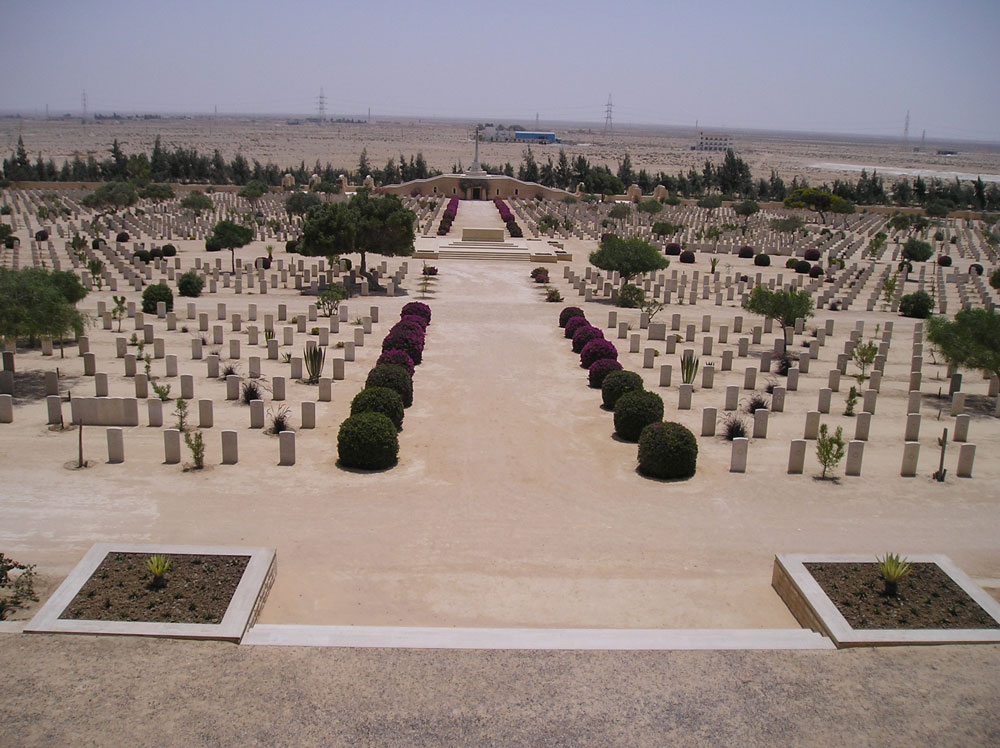 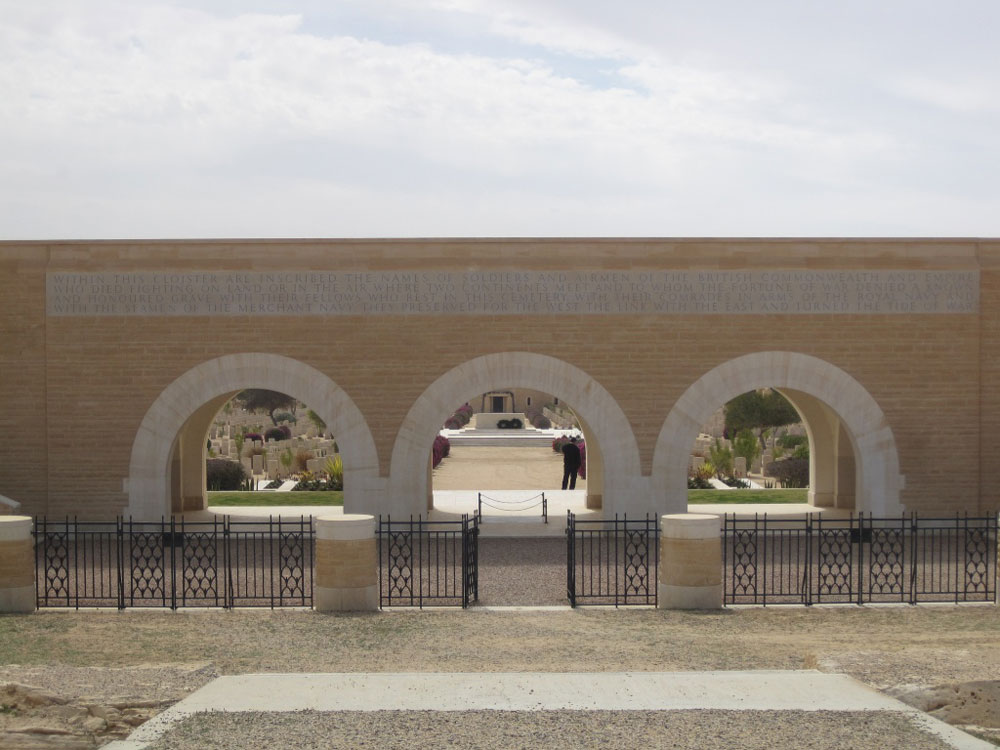 Image: The Alamein Memorial commemorates those who fell during the fighting but have known no grave 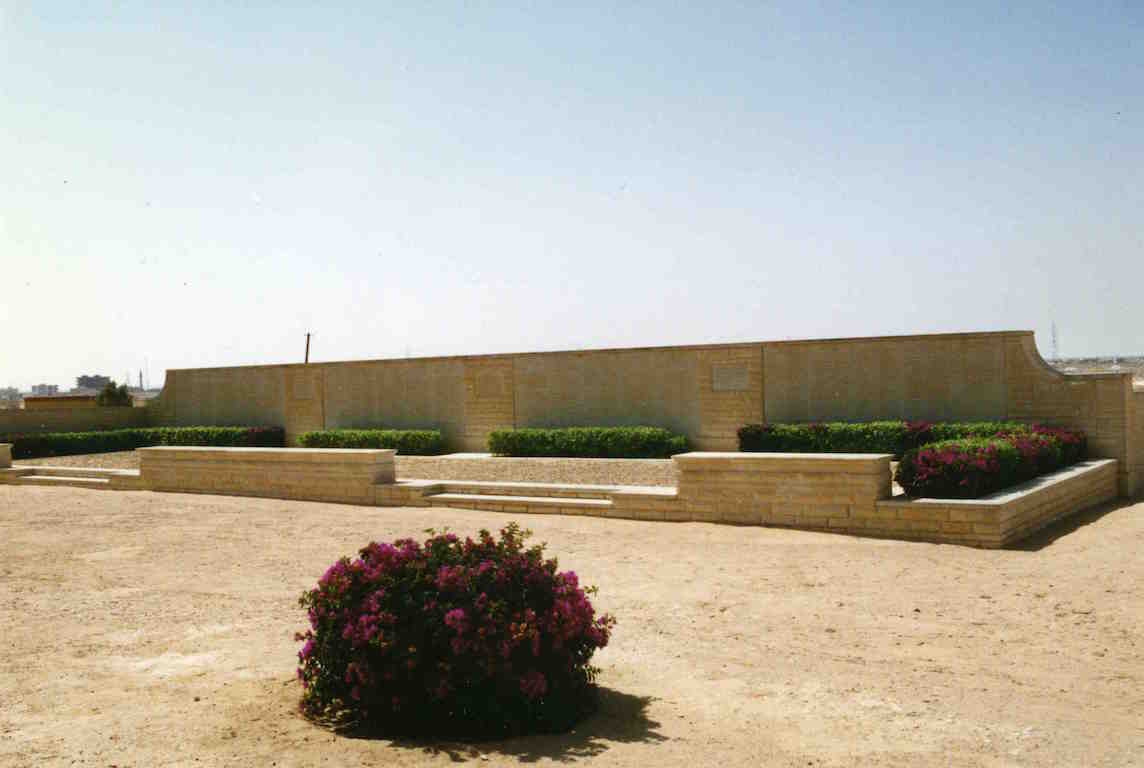 Image: The Alamein Cremation Memorial commemorates those who were cremated in accordance with their faith

El Alamein War Cemetery is Egypt’s largest CWGC cemetery. Here, over 7,200 Commonwealth burials can be found, 800 of which are unidentified. Many soldiers who fell in fighting throughout the Western Desert campaign are buried here, including those who took part in the titanic clashes at El Alamein.

You will also find the CWGC Alamein Memorial at the cemetery’s gates. 12,000 British and Commonwealth servicemen with no known grave are commemorated here.

British Imperial forces were multi-faith organisations. Many soldiers who fought and fell during the battle had faiths requiring their remains to be cremated. These 600 or so men are commemorated on the panels of the Alamein Cremation Memorial.

Our latest blogs
Blog
In Flanders Fields: The Life and Death of War Poet John McCrae
Blog
The Battle of Tripoli: How Montgomery & 8th Army pushed the Afrika Corps out of Libya
Blog
War Cemeteries in Belgium: Visiting Guide
Read more blogs
Share this on
Tags Battle of El Alamein