Noted military historian Lucy Betteridge-Dyson takes us through some moving personal inscriptions from the Battle of Passchendaele ahead of the battle’s 31st July anniversary.

The Battle of Passchendaele personal inscriptions 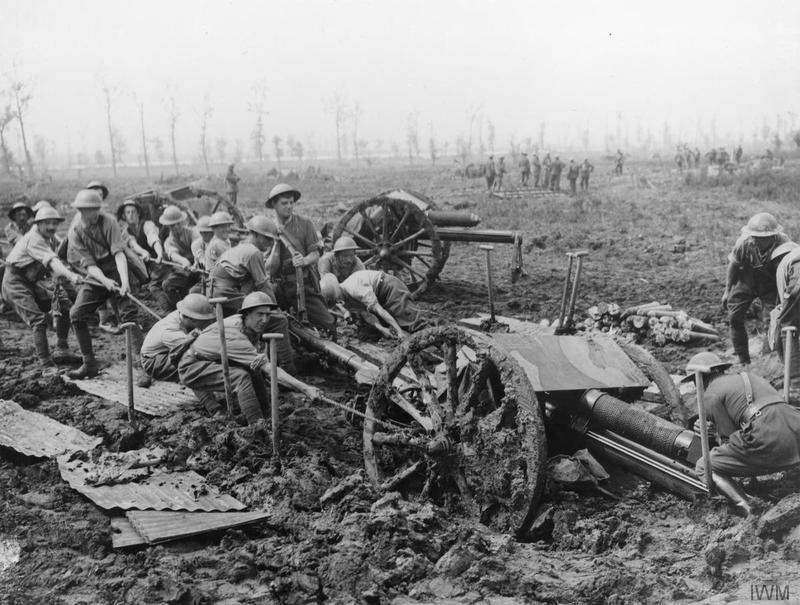 A tale told in headstones

The distinctive headstones of the Commonwealth War Graves Commission, identical in shape and size the world over, represent one of the Commission’s most important founding principles - that of equality in death for the service personnel that it is tasked with commemorating (although there are some variations).

Yet the decision to implement a uniform headstone design was initially a controversial one, as many families felt aggrieved at being denied the opportunity to memorialise their kin as they wished.

Although the Commission stood firm in their belief that a uniform design was the only way to ensure all who fell were remembered fittingly, it also well understood these concerns and the importance of allowing families some way to personalise the graves of loved ones - whom very few would ever be able to visit.

With this in mind, the Commonwealth War Graves Commission followed a recommendation in the Kenyon report, to allow next of kin the option to choose:

“A ‘short inscription of not more than three lines’ of ‘an appropriate text or prayer or words of dedication.’”

Although the Commission did not draw up any official guidelines to regulate the choice of inscription, those that seemed controversial were carefully reviewed (and on occasion rejected) and a limit of 66 characters for each headstone was set.

As with many CWGC ‘rules’ this was more of a guideline, and there are many inscriptions which exceed this limit.

Although that may not sound like a lot, the power of the words chosen by relatives continues to resonate with visitors at CWGC sites today, providing us with a small window into the desperate grief of thousands of families affected by both the First and Second World Wars.

Of course, personal inscriptions could only be chosen when the deceased could be identified and the next of kin traced, which in many cases, was not possible.

At the CWGC’s largest cemetery, Tyne Cot, over 70% of its nearly 12,000 burials are unidentified, a testament to the horrendous conditions faced by troops in and around the Ypres Salient during the First World War. The cemetery, which lies just outside of the village of Passchendaele, was built around a German strong point that was captured in October 1917 during the Third Battle of Ypres.

This year marks the 105th anniversary of the controversial Allied offensive. Fighting raged from 31st July through an unseasonably wet August, a dry September and early October, and into the rains of Autumn.

There was some success for the Allies, but fierce German resistance and the destruction of the landscape turning it into a slurry pit slowed progress to a halt. The battle ended on 10th November 1917 with the capture of Passchendaele Ridge.

Over half a million men and women were wounded, killed, or missing by the time the offensive was halted.

Of some 1,300 headstones at Tyne Cot with personal inscriptions, approximately 1,150 fell during the Third Battle of Ypres, and thousands more scatter the salient in CWGC cemeteries large and small. This blog will explore just a handful of these to see what we can learn about those buried and their families’ beliefs and pain in the wake of the conflict.

Personal Inscriptions of the fallen of Passchendaele 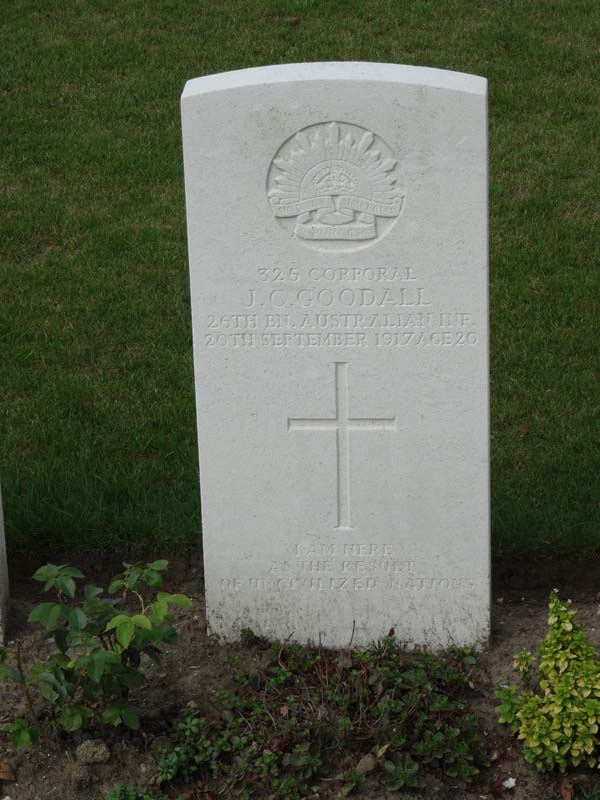 The use of first-person present tense in this inscription is particularly striking and we are also left wondering who the uncivilised nations referred to are. Is this aimed at just the Central Powers or is it a political statement about all nations involved in the war?

Due to its potentially offensive tone, the Vice Chairman of the Commission raised the inscription at the 60th Commission meeting in November 1923 when, after some discussion, the Commission agreed to accept it. But who chose it and why?

In June 1916, Captain Alexander Goodall and his wife Cassandra of Brisbane, Australia, received the dreadful news that their son John had been seriously wounded in France.

The six months he spent recovering in hospital on the other side of the world must have been agonising for his parents, but they were no doubt relieved to hear that he had made a full recovery.  He returned to duty in 1917.

Just a few months later, Captain and Mrs Goodall received another letter… this time confirming that John had been killed in action. His friend, Private Charles King, recalled what happened:

“He was sniped, being shot between the eyes and was killed instantly... I saw his body and examined him. He was my mate.”

Goodall was just 20. He had survived the horrors of Gallipoli and being wounded three times. After going through so much it is perhaps no surprise that the inscription chosen by his parents focuses not on hope or glory, but at the unjustness of his passing, merging John’s own voice with a post-war sentiment shared by many. 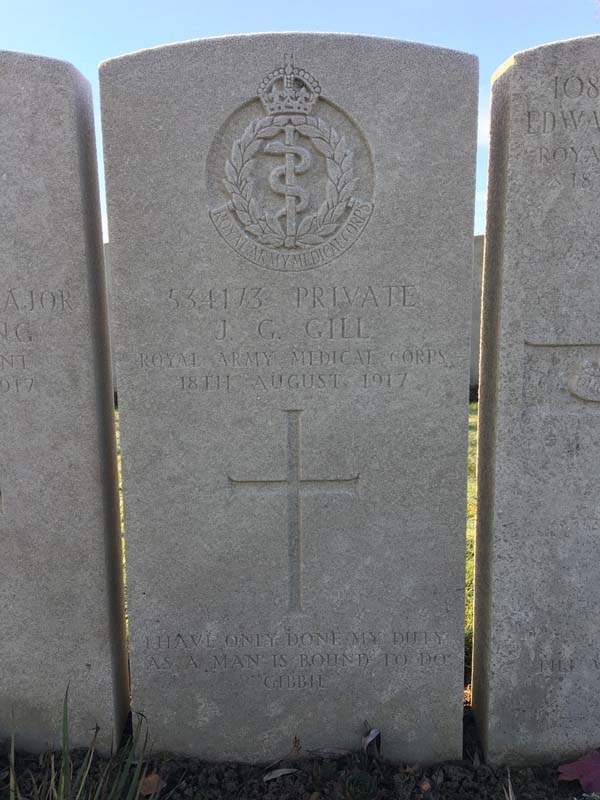 I HAVE ONLY DONE MY DUTY

AS A MAN IS BOUND TO DO

A focus on elevated ideals such as duty and honour are commonplace in personal inscriptions and are reflective of wider values deemed important in British society at the time. Victorian and Edwardian ideals of chivalry – particularly that of self-sacrifice to protect others – were popular among grieving relatives trying to make sense of the war.

In Private Gill’s inscription, however, this idealistic language quickly gives way to something quite different in the final line. ‘Gibbie’, we assume, was Private Gill’s nickname, but from who?

A look into CWGC records shows us that his personal inscription was chosen by his father, John, a textile worker from Waltham Forest, Essex.

By including his son’s nickname, Gill is lifted out of anonymity, and we come to think of him not simply as a soldier, but an individual, loved and missed by those he left behind.

Whilst the Edwardian value system may be less relatable today, readers across space and time can surely empathise with the intimate feeling of the loss of a loved one conveyed by just one word in this inscription. 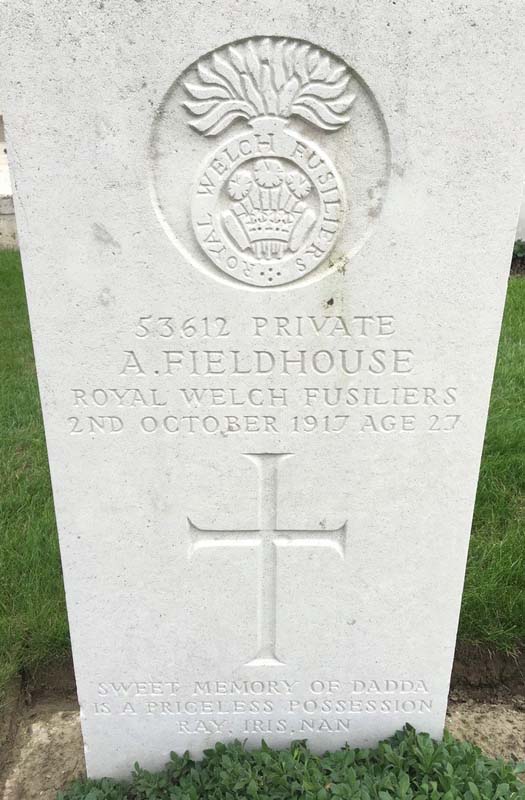 IS A PRICELESS POSSESSION

Many personal inscriptions focus not on the deceased, but on the bereaved. Private Fieldhouse’s inscription was chosen by his wife, Hannah, and removes us from the war experience and the Western Front entirely.

We are reminded that Alfred was not just a soldier, but a father, to what we assume are young children given the choice of ‘Dadda’ rather than father. This represents a narrative of the bereaved that was so divorced from the war that the inscription could easily be found in any civilian cemetery at home, rather than a war cemetery in a foreign land.

In contrast to those that use idealistic language, here instead we consider that it was not just Private Fieldhouse that made a sacrifice but his children, reminding us that the war would impact generations to come. 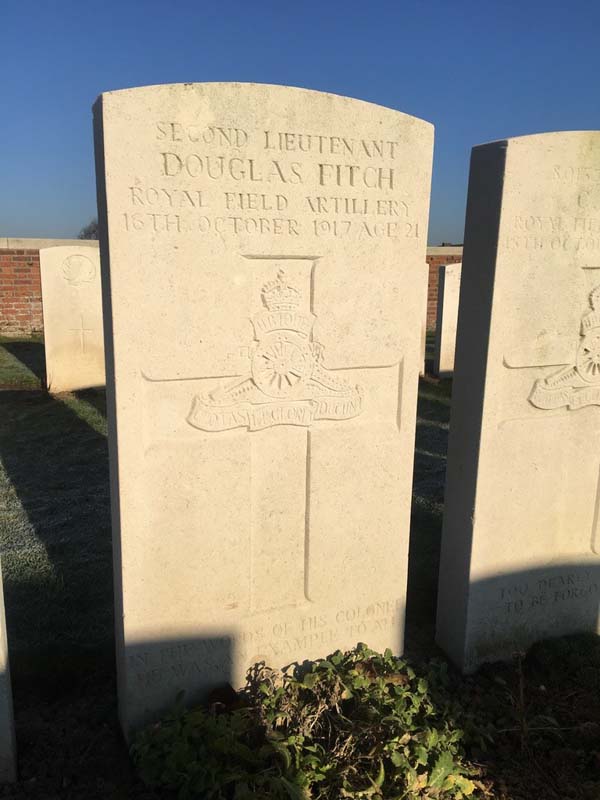 IN THE WORDS OF HIS COLONEL

HE WAS AN EXAMPLE TO ALL

The narrative of the bereaved focusing on civilian life contrasted greatly with a language almost unique to CWGC headstones – commemorating loved ones in explicitly military terms.

In Douglas Fitch’s case, his parents, Charles and Janet, chose to reference a letter sent by his Colonel shortly after his death:

"He was a most gallant officer, beloved of his men and his death makes a loss which is felt by us all.

Throughout all the hard and dangerous work of the last few weeks your son never spared himself, and he was an example to us all."

Through this choice, we sense Charles and Janet’s pride and a degree of acceptance of the death of their only son in service of his country.

Letters sent to next of kin by soldiers’ commanding officers rarely reflected the brutal reality of a soldier's death but were instead intended to provide some comfort and context, by reflecting ideals of duty and bravery, qualities that the bereaved often then wished to convey to the headstone reader.

This communication between the military and the bereaved was deeply important in helping loved ones process and make sense of their relative’s death in unusual and alien circumstances.

What can we learn from these personal inscriptions?

Personal inscriptions provide us with brief, individual accounts of the impact of the First World War. In taking the time to understand their origin and meaning, we can learn much about the people who chose them, and the unifying grief that swept the Commonwealth after the conflict.

Whilst the majority were written by and about strangers, a century ago, as we read them today, we often project our own experiences and sentiments onto them, and they become deeply personal, open to many different interpretations.

For me this is their true wonder, as whilst at first look CWGC headstones appear to be identical, the words inscribed provide countless individual stories, never to be forgotten.

Lucy Betteridge-Dyson is a broadcaster and military historian with a particular interest in the First and Second World Wars. An enthusiastic public speaker, she is especially passionate about engaging a wider audience with conflict history, having worked with the BBC, Channel 4, Commonwealth War Graves Commission and Royal British Legion. You can find Lucy on Twitter @LMBD1418 or at www.lucybetteridgedyson.com.