CWGC marks 75th anniversary of the Battle of El Alamein

The 75th anniversary of one of the most significant battles of the Second World War will be marked at a ceremony in the CWGC’s El Alamein Cemetery and Memorial in Egypt on Saturday 21 October. The commemoration will be the largest for many years and, as the 75th, is likely to be the last on this scale. Ahead of Saturday's ceremony, here is more about the battle and the Commission’s work in North Africa.

The Second Battle of El Alamein began on 23 October 1942 with a huge Allied artillery bombardment – the first seen since the First World War. Lasting 12 days, the battle marked a turning point in the North African campaign fought between Commonwealth forces and German and Italian forces. For both sides the ultimate aim was control of the Mediterranean, the link with the East through the Suez Canal, Middle East oil supplies and the supply route to Russia through Persia.

Although there was much fighting afterwards, with many lives lost, it proved an important step towards the final defeat of Axis forces in North Africa in May 1943. It also helped to increase British morale following the British Expeditionary Force’s retreat from France in 1940 and the fall of Singapore in February 1942. The Battle of El Alamein was a much-needed victory for Commonwealth forces, hailed at the time by Prime Minister Winston Churchill. He later said: “Before Alamein we never had a victory, after Alamein we never had a defeat.” The Commission in North Africa

A number of cemetery sites were selected in North Africa before the end of the Second World War ensuring they were level, close to a road, and preferably a town, allowing easy access for visitors after the war ended.

Sir J. Hubert Worthington, who worked as an assistant to Sir Edwin Lutyens in his early days, was appointed Principal Architect for North Africa for the Commission. His work required accepting the special demands of the terrain and climate of the regions. For example, a desert site such as El Alamein needed high walls to keep out drifting sand and water was needed for plants.

In July 1943, Worthington embarked on a seven-week tour of some of the sites already selected and added further criteria:

By March 1944, surveys had been made and sketch designs produced for three cemeteries. 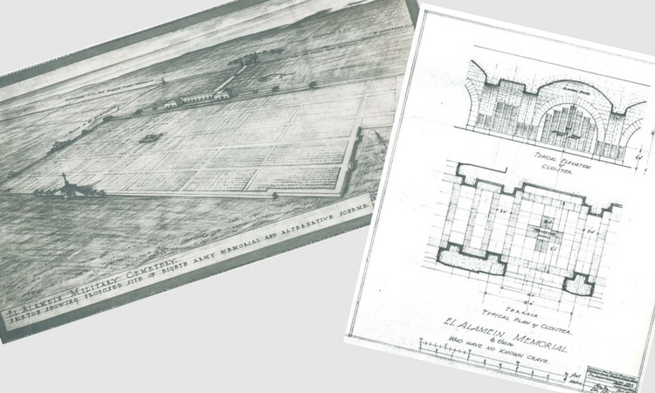 El Alamein War Cemetery is the largest CWGC cemetery in Egypt. The cemetery contains more than 7,200 Commonwealth burials of the Second World War, of which more than 800 are unidentified. It contains the graves of servicemen who died during all stages of the campaigns in the Western Desert and whose remains were brought into the cemetery from a wide area, but especially those who died in the Battle of El Alamein at the end of October 1942 and in the period immediately before. There are also some 100 war graves of other nationalities.

The cemetery is surrounded by high walls to keep out the worst of the drifting sand and shelter buildings were constructed to provide cover from the sun. Due to the severe lack of water it was impossible to create the style of an English country garden seen in many CWGC cemeteries. White headstones stand in the desert sand marking the graves of the fallen and colour is provided by carefully tended desert shrubs, flowers, trees and cacti.

At the entrance to the cemetery is the CWGC Alamein Memorial. It bears the names of almost 12,000 British and Commonwealth servicemen who have no known grave. Like the cemetery, the memorial was designed by Worthington and both were unveiled on 24 October 1954 - the 12th anniversary of the Battle of El Alamein - by Field Marshal The Rt. Hon. Viscount Montgomery of Alamein, who commanded British forces in the desert during the war. 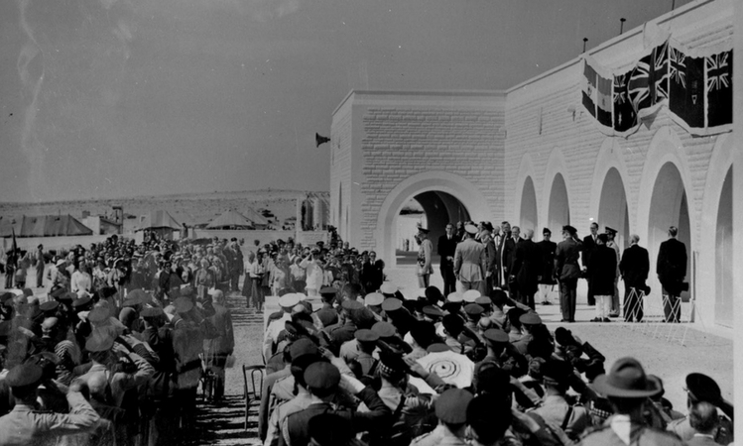 The memorial takes the form of a cloister, some 80 metres long, and is entered through three arches which lead to a wide hall where the names are inscribed in stone. Within the cloister are Land Forces panels commemorating more than 8,500 soldiers, and Air Forces panels commemorating more than 3,000 airmen of the Commonwealth. Broad stairs lead to a roof top terrace with stunning views across the desert and in the distance, the Mediterranean Sea.

The Alamein Cremation Memorial, which stands in the south-eastern part of El Alamein War Cemetery, commemorates more than 600 men whose remains were cremated in Egypt and Libya during the war, in accordance with their faith. 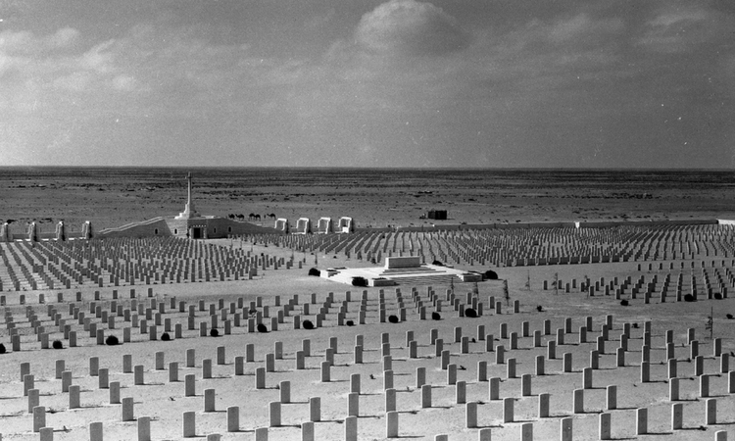 Many commemorative ceremonies have been held at the cemetery over the years. In October 1950, as part of the eighth anniversary of the battle, a ceremony was held with four guards of honour present (one Navy, one RAF, and two Army). Sir Ralph Stevenson, the British Ambassador and Mr Triandafilidis, the Greek Ambassador, laid wreaths at the foot of the flag staff. During the wreath-laying ceremony, two Lincoln bombers flew overhead and dropped 250,000 poppies over the cemetery.

Saturday’s commemoration will be attened by President Sisi of Egypt, as well as high-ranking dignitaries from Australia, Germany, Italy, Greece, New Zealand, India and South Africa. Multinational Force Observers currently based in Sinai (including British, Australian and New Zealand troops) will also be there.

Sir Tim Laurence, Vice Chairman of the CWGC, will be representing the Commission. Sir Tim said: "The significance of the battle, and its human cost, are embodied in the CWGC El Alamein Cemetery and Memorial. In terms of its area, it is one of the largest Commission sites in the world. Our historic commitment to honour the dead with beautiful planting here faces perhaps its greatest test, and I am proud of the work of our gardeners – the majority of them Egyptian – whose hard work and skill ensures that carefully chosen indigenous plants flower amongst the thousands of headstones set in the desert sands.”