On 12 October 1917, during the Third Battle of Ypres, New Zealand suffered the greatest disaster in its military history in terms of lives lost in a single day. The Commission commemorates in Belgium some 2,170 servicemen of New Zealand forces who died during the Third Battle of Ypres, of whom more than 840 died on 12 October 1917. As hundreds converge on CWGC’s Tyne Cot Cemetery for the New Zealand National Commemoration today, we take a look back at the country’s significant contribution in the First World War. 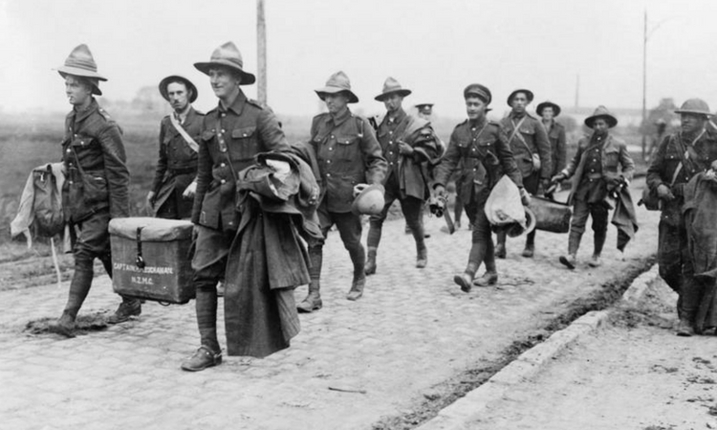 The outbreak of war

In 1914 New Zealand had little more than one million inhabitants, of whom some 120,000 enlisted. Conscription was introduced in New Zealand from late August 1916, and was extended to Maori in June 1917. In addition more than 3,300 are thought to have served with the Australian Imperial Force and British forces, and a total of 550 nurses served at home and abroad.

Units from New Zealand were quickly sent to serve overseas in support of the Empire’s war effort after Britain declared war on Germany on 4 August 1914. Their first engagement took place in the Pacific region, when the German colony of Samoa was captured on 29 August. New Zealanders went on to serve in the Middle East, and in the Gallipoli campaign, but by far their largest effort came in Europe.

In April 1916, the newly-formed New Zealand Division was deployed to France where it took part in the Somme Offensive at Longueval on 15 September. In April 1917, New Zealanders played an important role in the operations in and around Arras. In Belgium, they captured the village of Messines in June 1917. In October, the New Zealand Division fought in two major assaults that formed part of the Third Battle of Ypres. On 4 October they seized and secured the Gravenstafel Spur during the Battle of Broodseinde, with an advance of some 1000 metres and the capture of more than 1,000 German prisoners. They lost 320 of their men, including former All Blacks (1905-1906) captain Dave Gallaher, who is buried at CWGC Nine Elms Cemetery.

On 9 October, the British-Australian attack to open the way to Passchendaele failed. New Zealanders took part in the next push on 12 October at Bellevue Spur. Fighting in horrendous conditions, with little cover, the casualties remain unsurpassed for a single day: a total of 3,700 casualties, of which more than 840 were either dead or mortally wounded.

Passchendaele eventually fell in early November, but the front remained active. Some three weeks later, on 3 December 1917, New Zealanders attacked German defensive positions in Polderhoek, not far from Polygon Wood, attempting to capture the high ground. They managed to push the line slightly further forward, but a few days later the Germans regained the lost ground. Some 80 men died and hundreds were wounded. 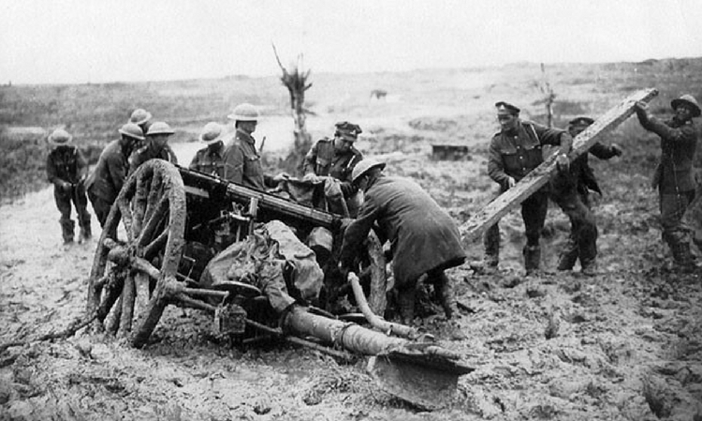 Jacking up a field gun at Passchendaele in an attempt to move it. National Army Museum

New Zealand memorials to the missing

After the First World War, the New Zealand government decided that missing soldiers should be commemorated in cemeteries near to where they died. Rather than being listed on the Menin Gate, for example, the names of missing New Zealanders appear on memorials at Tyne Cot Cemetery, Buttes New British Cemetery and Messines Ridge British Cemetery.

CWGC Tyne Cot Memorial commemorates by name nearly 35,000 officers and men whose graves are not known and who died after 16 August 1917. The names of 1,116 New Zealanders are engraved on panels within the New Zealand Memorial Apse.

Messines Ridge (N.Z.) Memorial stands within Messines Ridge British Cemetery and commemorates 828 soldiers of the New Zealand Expeditionary Force who died in or near Messines in 1917 and 1918 and who have no known grave. Buried in the cemetery are 130 New Zealanders.