From Roman ruins to remote controlled mowers - Our work continues

All roads lead to Rome

The potential find of Roman ruins has slowed our construction of a new office in Italy. It comes with the territory when building anything in the country’s capital, and Rome War Cemetery is no exception.

The remnants of a Roman road were found ahead of laying foundations for our new office there, leading archaeologists to widen their search and pause construction. After further investigations it’s believed work can safely begin again in September. 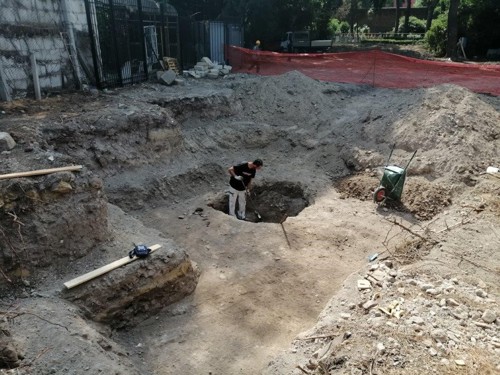 Once complete we will have a brand-new base for our Italian operations, which cover more than 120 locations and 50,000 commemorations.

Rome War Cemetery sits at what was once the ancient city limits and arguably has the oldest piece of architecture in our global estate. Incorporated into the cemetery’s boundary are the preserved ruins of the city’s walls, dating back to the third century.

The cemetery was designed by Louis de Soissons and is next to Porto San Paolo and the ‘Pyramid’. The construction of the new office will also allow a review of the planting of the site which has some fantastic Pinus pinea – Stone pines which are starting to fail due to their age. 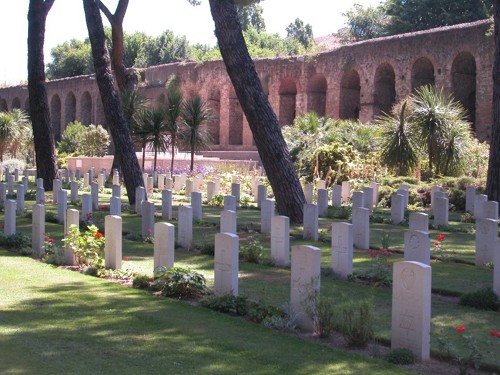 The Aurelian walls, dating back to the third century, that run along one side of Rome War Cemetery

More than just a shed

Given the historic nature of our sites, even a tool shed requires care and attention when restoration takes place. Many of these functional buildings are built into the fabric of our cemeteries, like at Bailleul Communal Cemetery Extension, in Northern France.

When recent work took place here only damaged bricks were removed, with stone inserts fixing what could be preserved in place.

During and after work, even features like a tool shed require delicate restoration

Instead of replacing original features which had deteriorated, such as wooden doors and metal grills, they were sent to our Ieper workshop and brought back to life by our expert carpenters and blacksmiths.

Repairs also took place on the boundary walls of the cemetery. It quickly became clear that their foundations were no longer stable enough, risking longer term damage to the site. New concrete retaining walls were constructed before being covered by traditionally made clay bricks to match the original style.

The mature lime trees were all retained as they are a significant part of the cemetery layout.

During and after work, the new concrete filled boundary wall covered in traditional brickwork

With a huge global estate and enviable standards of turf maintenance, making sure we have the right equipment is important. This week we ran a demonstration to test some of the latest developments at Cannock Chase in Staffordshire, where we maintain a Commonwealth site and the German War Cemetery on behalf of the German Government. 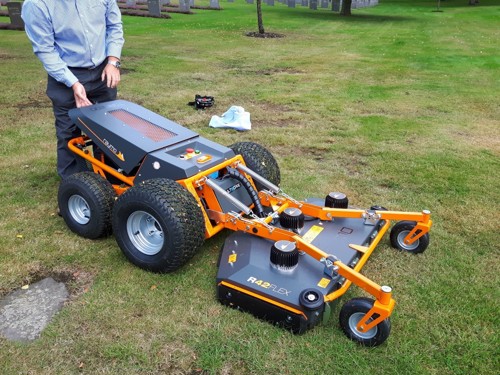 Among the models on show was a remote controlled mower. Because it can be steered from a distance it makes maintain hard to reach places, like steep banks, safer and easier for our staff.

While it’s not yet ready to roll out on a big scale, we’re always keeping an eye on how new machinery can assist us in our global operations.

Opportunities like this are a great chance for our teams to get a hands-on glimpse at how the latest technology could help them in years to come.