Hundreds of items added to the Commission’s new online archive

A second batch of archive material has been digitised and added to the new CWGC Archive Catalogue. 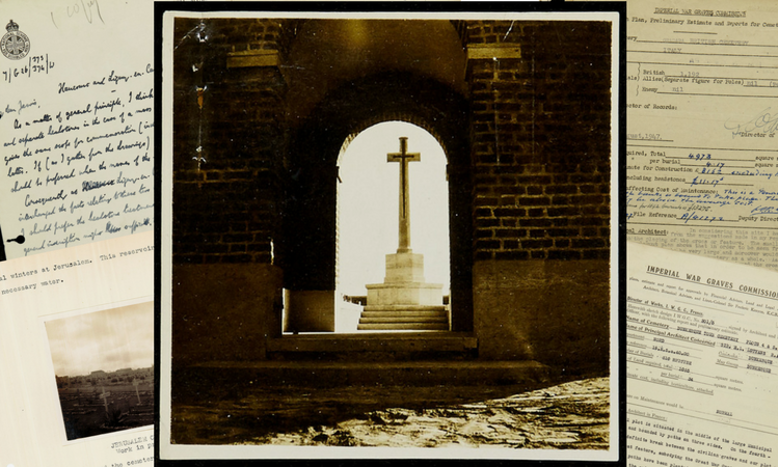 The newly available material, comprising more than 650 reports written by the Commission’s Principal and Assistant Architects after the First and Second World War, provides an insight into the architectural vision of the Commission and the views of the great architects themselves. The war records include reports and correspondence written by key architects including Sir Edwin Lutyens, Sir Herbert Baker, Sir Reginald Blomfield, Sir Hubert Worthington and Sir Edward Maufe.

This is the second release of content from the Commission’s treasured archive collection made available in digital form for the first time.

Andrew Fetherston, the CWGC’s archivist, said: “These war records provide a window into the workings of the Commission in the immediate post First World War and post Second World War landscape. They shed light on the processes by which the cemeteries and memorials were designed and constructed, and also illuminate the roles of the Principal and Assistant Architects in making the Commission’s vision of appropriate and perpetual commemoration for the war dead a reality.

“Anyone who has visited a CWGC cemetery or memorial comes away feeling they have visited a special place, and these records illustrate how the sites were transformed from the original cemeteries with the rows of wooden crosses to the ‘silent cities’ that we know today.”

The Commission launched the new CWGC Archive Catalogue in November last year, initially making more than 600 items available, including digitised copies of the first 572 Commission Meeting Minutes from 1917 to 1987, and 97 Commission Annual Reports from 1919 to 2016.

There will be regular releases of new digitised content, with the next release set for March.

The Commission’s archive contains more than 16,000 items, which date from the very beginnings of the CWGC to the present day. The Commission’s library contains a further 2,700 books, pamphlets, magazines and other printed ephemera, mainly covering various aspects of the two world wars.

The new online catalogue contains listings of all of these items, which are available for viewing by appointment at the CWGC’s Head Office in Maidenhead by emailing enquiries@cwgc.org