The names of previously unrecognised Second World War dead are being added to the Tower Hill Memorial in central London. The bronze panels are being altered to include seven new names after research saw them added to the Commission’s roll of honour.

A further sixteen names of both wars are also being amended to correct inaccuracies.

The Tower Hill Memorial commemorates more than 36,000 missing dead from the Merchant Navy, who served during the World Wars. It was designed by Sir Edwin Lutyens and is Grade I listed.

To changes names already cast onto the bronze panels, experts first remove each incorrect letter by hand using a hammer and chisel. 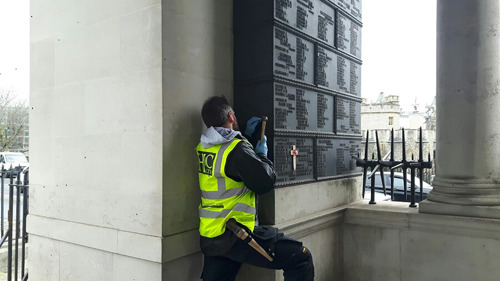 The surface is then cleaned and prepared with wire wool and careful use of a grinder before the new letters are soldered in place. New letters are cast using 3D scans from the memorial to ensure an accurate match.

Every year we receive thousands of submissions to amend or add a name to our roll of honour for the Commonwealth war dead as new research highlights inaccuracies and omissions.

While our online records can be quickly updated, our teams on the ground must carefully plan how each amendment and addition can be reflected on a headstone or memorial.

Amendments to memorials often take place in groups, such as the current work, allowing our teams to take account of the panel layout and long-term conservation of our sites.

The new panel layouts are drawn by our in-house drawing office using computer aided design software, which contains a library of most the stone and bronze panels found on our memorials worldwide. 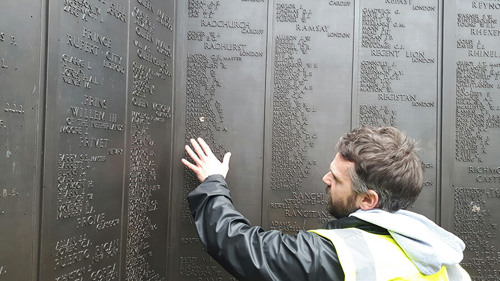 CWGC undertook a major restoration of the memorial in 2019 when the memorial’s roof was removed stone by stone to allow a new waterproof layer to be added.

You can learn more about the memorial, including a free downloadable tour, in our campaign to reconnect people with our World War heritage in Great Britain. 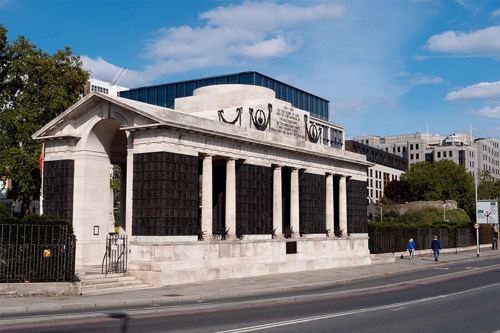 Share this on
Tags Tower Hill memorial Our work continues