Prestigious cycle race to start under the Menin Gate Memorial

This Sunday, 28 March, one of Belgium’s premier cycling races will hold a symbolic start at the CWGC Ypres (Menin Gate) Memorial.

The Gent to Wevelgem road cycle race, known officially as Gent–Wevelgem – In Flanders Fields, runs through the former Battlefield of the First World War, passing by some incredible reminders of the war still visible in the landscape, including many of our cemeteries and which stand as a visual reminder of the many lives lost during the war. 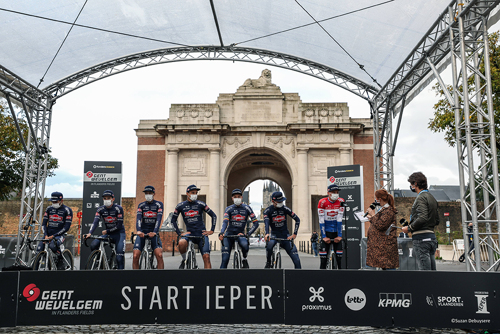 ©Suzan Debuysere. Cyclists in front of the Ypres (Menin Gate) Memorial in the race of 2020.

While the current restrictions will limit public involvement, the elite men and women’s races will still be held. The race is organized by Flanders Classics and is broadcast nationally and internationally.

Cycling has many more connections with the Menin Gate memorial and the men commemorated ther than you would initially think. Did you know:

Thirty of the 200 Army Cyclists who lost their lives during World War One are commemorated on the Ypres (Menin Gate) Memorial.

Cycling was a popular pursuit before the First World War. British and Empire forces even employed specialist cyclists units used for reconnaissance and communications work. But with the onset of static trench warfare the cyclist’s mobile role was limited. They continued to serve as couriers and messengers but also served as sentries and on work parties behind the lines and when needed fought dismounted in the trenches alongside the infantry. Over 200 army cyclists of the First World War are commemorated by the CWGC in Belgium, 30 of whom are named on the CWGC the Ypres (Menin Gate) Memorial.

A professional world record winning cyclist, Corporal Thomas Gascoyne, is commemorated on panel 23 of the Memorial.

One of the cyclists commemorated on the CWGC Ypres (Menin Gate) Memorial is Corporal Thomas Gascoyne, who set several world records in cycling before joining the 21st Battalion (Infantry) of the Australian Army. He was killed on 4 October 1917 during the Battle of Broodseinde [or Third Battle of Ypres]. His final resting place remains unknown and so he is commemorated in perpetuity by the CWGC alongside his missing comrades on panel 23 of the Menin Gate.

The very first British soldier to be killed in action on the Western Front was Private John Parr while acting as a forward scout mounted on a bicycle.

The first British solider to be killed in action on the Western Front was Private John Parr of the 4th Battalion, Middlesex Regiment. Private Parr was killed on 21 August 1914, whilst acting as a forward scout, mounted on a bicycle, on a reconnaissance patrol just north of Mons. Private Parr is buried in St Symphorien Military Cemetery, Belgium alongside some of the first and last British and Empire servicemen to be killed during the war.

A hundred years ago the CWGC gardeners already used the bicycle to cycle from cemetery to cemetery to carry out maintenance.

In an age before the mass motor transport, many of the Commission’s gardeners would ride to work on bicycles, carrying some tools and equipment with them as ride between the cemeteries. 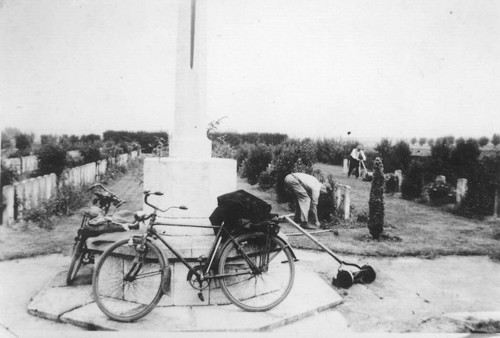 Today, one in three of the CWGC members of staff in Belgium lease a bicycle as part of ecological commuting to work.

Even today, our employees are keen to cycle. Since 2019, the CWGC in Belgium has launched a bicycle leasing plan. One in three of our team members is signed up. Office workers, craftsmen and gardeners are committed to using their bicycles regularly for commuting from and to work, just as their colleagues did 100 years before them.