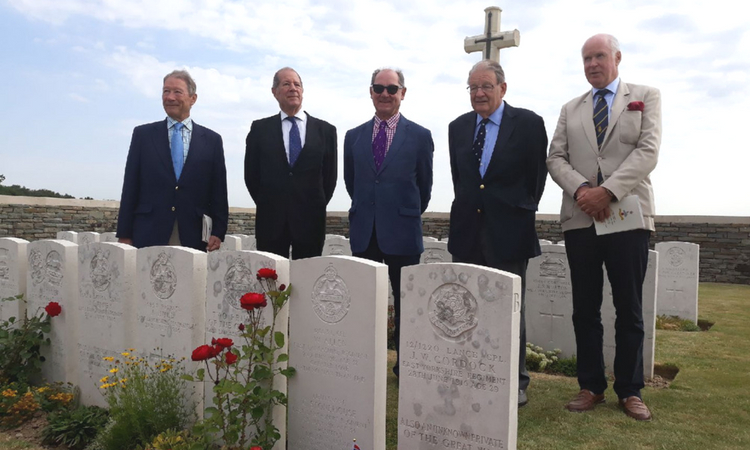 A rededication service for Lieutenant Charles Stonehouse took place at 10:00 on 3 July at the Commonwealth War Graves Commission’s Serre Road Cemetery No. 3, on the Somme.

Charles Stonehouse was born in Blackburn in 1882, the son of Francis and Mary Ann Stonehouse. An architect by profession, he enlisted into the 11th Battalion, East Lancashire Regiment (Accrington Pals) on 17th September 1914. He was quickly promoted to Lance Corporal before being appointed to a commission in January 1915 with the rank of Second Lieutenant. Five months later he was promoted to Lieutenant.

In June 1916 the ‘Serre Road’ leading out of Mailly-Maillet was in British hands, and entered No Man's Land about 1,170 metres South-West of the village of Serre, which was held by the Germans.

On 1st July 1916, Lieutenant Stonehouse led his men in the attack on the village of Serre. According to an eyewitness statement by 20939 Private Fred Whitesmith, Charles Stonehouse was near the enemy trench when he was hit in the wrist. His orderly, 15216 Private Roland Banks, was killed while binding up his wound and Lieutenant Stonehouse himself was killed shortly afterwards. 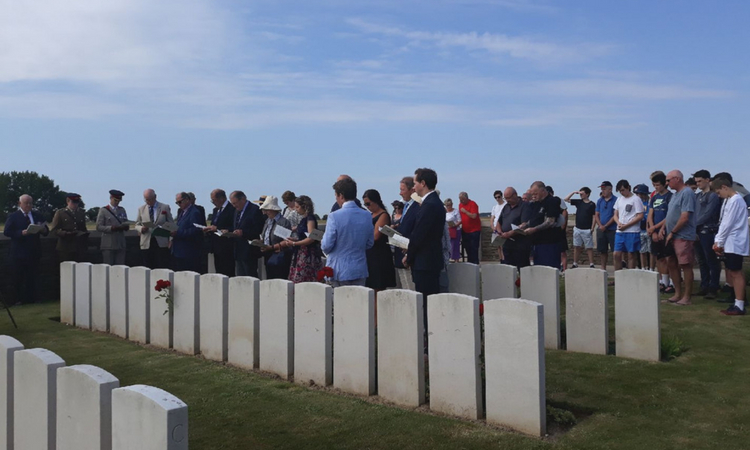 Although some men reached Serre, the attack failed. The 3rd and 31st Divisions renewed the attempt, without success, on 13 November. Serre was finally captured on 25 February 1917 after the Germans evacuated the village. In the spring of 1917, over 80 graves from the surrounding battlefields, including that of Lieutenant Stonehouse, were brought into the Commonwealth War Graves Commission’s Serre Road No 3 Cemetery.  Of these, over half remain unidentified and there are special memorials to four men who are known or believed to be buried among them.

Thanks to the dedicated efforts of a researcher, the grave of an unknown Lieutenant of the 11th Battalion, East Lancashire Regiment has now been identified as that of Charles Stonehouse. The CWGC has marked his grave with a new headstone bearing his name and a personal inscription chosen by his family.

The service of rededication was organised by the Joint Casualty and Compassionate Centre, Ministry of Defence and was attended by family members, British Defence Staff, Regimental representatives and local dignitaries.

“Commemorated on memorials to the missing for almost a century, it is now known that Lieutenant Stonehouse had been buried in Serre Road No 3 Cemetery. Thanks to the dedicated efforts of many, he has now been identified and today the Commonwealth War Graves Commission are honoured to be able to mark his grave with a headstone bearing his name.”