The service that was organised by the MOD’s Joint Casualty and Compassionate Centre (MOD JCCC), also known as the ‘MOD War Detectives’, took place on Wednesday 29 June and was supported by members of XI(F) Squadron RAF who are based at RAF Coningsby and conducted by the Reverend (Squadron Leader) Adrian Klos.

Helen Towler, great great of niece of 2nd Lt Pike, said:
“It was a really moving service and I am really privileged and proud to have been asked to attend and represent the family.
“I am really glad that the JCCC, the CWGC and the wider MOD community still remember our fallen from the Great War and it is really reassuring to know that if anything ever happened to our soldiers of today, they would never be forgotten.”

Tracey Bowers, JCCC said:
“To pilot a plane during the Great War over the Western Front took a great deal of skill, bravery and courage. Second Lieutenant Pike was a committed, experienced soldier who paid the ultimate sacrifice so we can enjoy freedom today.”

2nd Lt Pike was flying Sopwith Camel D9482 when, on 30 August 1918 he didn’t return to the aerodrome, and was presumed missing. No.65 squadron was based at Bray Dunes and flew escort missions for DH9 aircraft who were operating against targets at Bruges, Ostend and Zeebruggee.

The Reverend Klos said:
"I want to thank the researchers who were able to name the remains that gave us this opportunity to bring representatives from a Fighter Squadron, enabling us to recognise that unbroken line. From Second Lieutenant Pike’s sacrifice during the Great War and to their service today, and an opportunity to stand with them and be able to remember those who gave their lives for us.”

Henry George Pike was born on the 29 May 1895 in East Battersea, Wandsworth to Henry George and Louisa, his father was a carpenter. After school Henry was employed as a motor mechanic for three years until April 1916 when he enlisted into the Seaforth Highlanders, an infantry regiment of the British Army.

During his time in the infantry, 2nd Lt Pike became a Lewis Gun instructor indicating he was an experienced solider in a front-line position. Pike was awarded the British War and Victory medals during his infantry service.

In 1917 he applied for a commission in The Royal Flying Corps, described on his record of service as being 5ft 9in and having perfect vision; his appointment as a 2nd Lt was published in the London Gazette in August 1918 into the newly formed RAF.

Geert Bekaert, Area Director for Central and Southern Europe at the CWGC, said:
“Flying a plane in those days was only for the brave. The medals awarded during his time in the infantry clearly show that he belonged to that category of men. It is only right that we pay tribute to him in this way.” 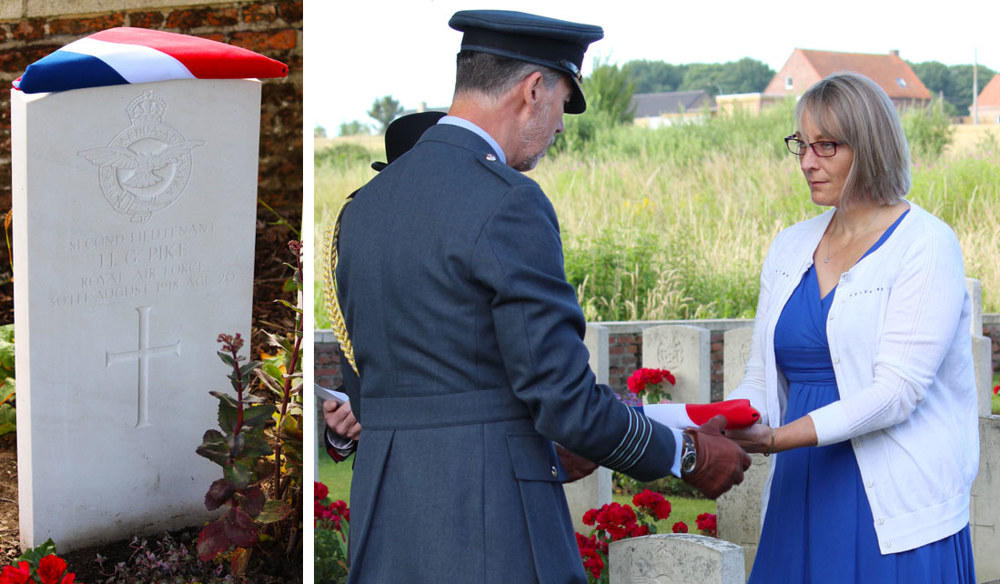