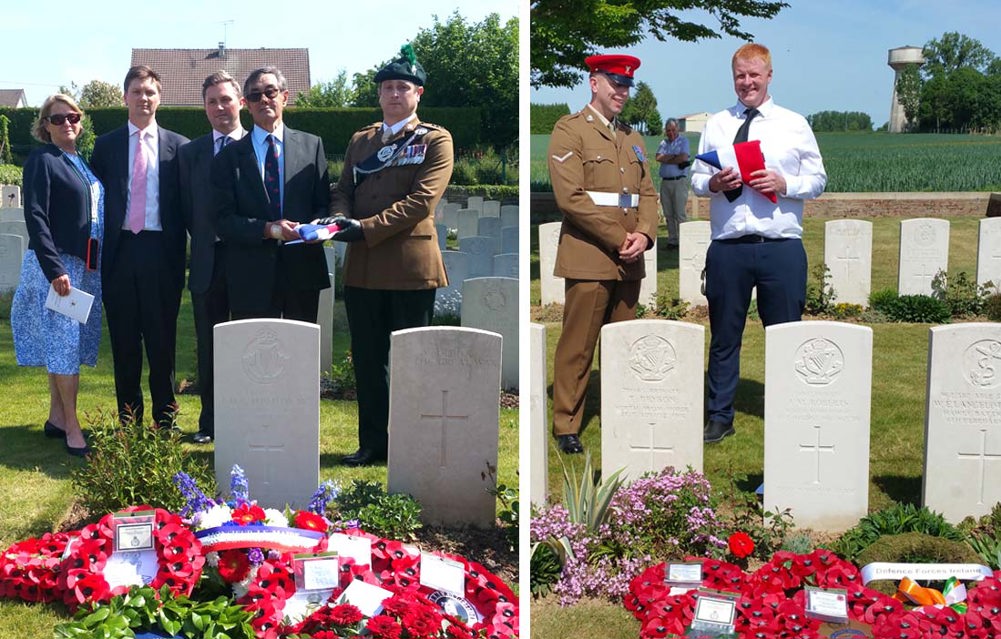 The graves of Lieutenant (Lt) Frederic Hornby Lever Rushton MC and Private (Pte) John Martin Roberts, who died whilst serving with Irish regiments in the Great War, have been rededicated in France more than a hundred years after they died.

The services, which were organised by the MOD’s Joint Casualty and Compassionate Centre (JCCC), also known as the ‘MOD War Detectives’, were held at the Commonwealth War Graves Commission’s (CWGC) Montcornet Military Cemetery on 17 May and Queens Cemetery, Bucquoy, on 18 May.

Rosie Barron, JCCC case lead said:
“It has been a privilage to work with The Royal Irish Regiment and The Scottish and North Irish Yeomanry to organise these rededication services. Both Lt Rushton and Pte Roberts were amongst the first men sent to the Western Front in August 1914 as part of the British Expeditionary Force. Their fates were very different, but ultimately both men laid down their lives in service of others.
Sharing this experience with their families brings their stories to life and ensures that their sacrifices are not forgotten.”

Lt Frederic Hornby Lever Rushton MC was born in the village of Gresford near Wrexham on 28 August 1888. He was one of five children born to Frederic Lever Rushton and his wife Frances Alice. He joined The King’s (Liverpool Regiment) in 1907, before being Commissioned into The Royal Irish Regiment in December 1909. In October 1911 he was promoted to Lieutenant. Lt Rushton, known as ‘Hornby’ within the regiment, is recorded as having been Captain of the regimental football team and a keen fisherman and motorist.

Lt Rushton was killed aged 26 whilst leading an assault on an enemy machine gun position on 15 September 1914 at Vailly-sur-Aisne, in eastern France. Having already been treated for a wound to his shoulder, he was urged not to go back into the attack, but insisted on doing so. Lt Rushton was serving with 2nd Battalion The Royal Irish Regiment and had been on the Western Front since 14 August 1914 taking part in the Retreat from Mons where he is said to have saved the life of his Commanding Officer and the Adjutant. He was Mentioned in Despatches on 16 October 1914 and again on 9 December 1914. He was awarded the Military Cross posthumously on 1 January 1915. Members of Lt Rushton’s battalion were given permission by a German Officer to recover his body. However, after the First World War Lt Rushton was found to be missing and he was commemorated on the La Ferte-sous-Jouarre Memorial.

Lt Rushton’s great nephew, Nigel Salt, who attended the rededication service at Montcornet Military Cemetery along with his family, said:
“We are particularity grateful that Hornby’s grave has at last been identified and cannot thank enough all those involved that have made this possible. My Grandmother was totally devastated by the loss of both her brothers. This would at least have given her some consolation.” 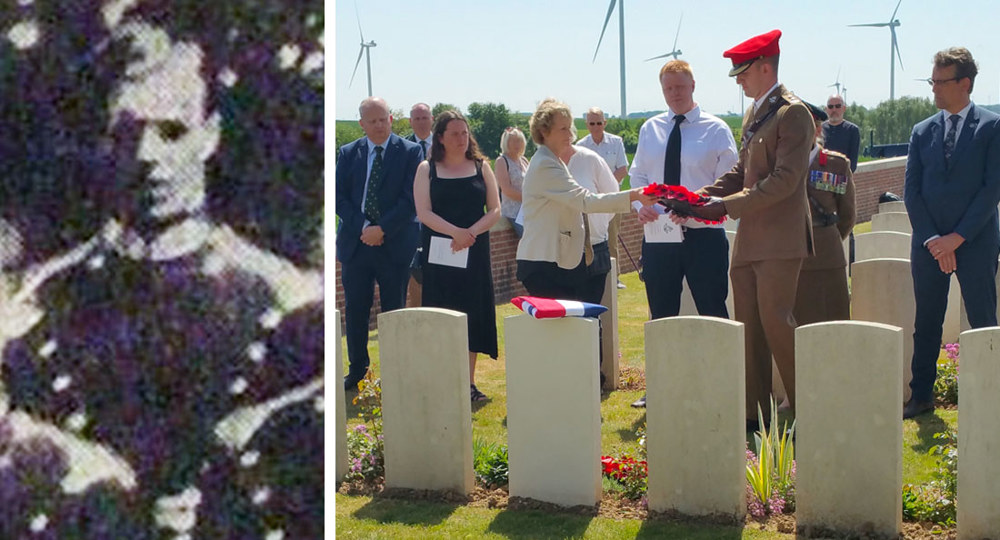 Private John Martin Roberts was born on 26 May 1888 in Sommerville, Dublin. He was one of nine children born to Thomas Roberts and his wife Amelia. Having worked as a groom, he joined The North Irish Horse in 1910. On 18 September 1912 he married Robina Crawford and their son John Hayes Roberts was born fourteen months later.

Pte Roberts, aged 30, arrived with The North Irish Horse on the Western Front on 17 August 1914, just days after Lt Rushton and like Lt Rushton took part in the Retreat from Mons and the Battle of the Aisne in 1914. In March 1918 The North Irish Horse was dismonted and became a Cyclist Battalion. Having survived almost the duration of the First World War, Pte Roberts was killed in an attack near the River Ancre on 21 August 1918. He was commemorated on the Vis-en-Artois Memorial.

Two of Private Roberts’ brothers were also killed during the Great War. Gunner William Henry Roberts of 23rd Brigade Royal Field Artillery was killed on 27 July 1916 and is buried in Corbie Communal Cemetery Extension. Stoker 1st Class Albert Edward Roberts of the Royal Navy was killed onboard HMS Racoon when it sank off the Irish coast on 9 January 1918. He is commemorated on the Chatham Naval Memorial. Another brother, Frederick Roberts, who served with the Royal Field Artillery, died as a result of his service after the war.

The rededication service at Queens Cemetery, Bucquoy, was attended by members of Pte Roberts’ family, including his great grandson, Craig Roberts. Craig Roberts said:
“John Roberts' involvement in WW1 was a long-forgotten story in my family. It wasn't until I began researching my family tree that I discovered the sacrifice John and his brothers had made during the war. When I heard that John had been found, it made a person I had only read about online seem more real. It allowed our family to rekindle a lost pride and rediscover a forgotten history in a family member who had made the ultimate sacrifice for his country. It is a privilege to represent my family at the rededication ceremony and give John the final resting place and honour he deserves. Our family would like to give special thanks to Phillip Tardif, who investigated and linked John's death and burial location, allowing John to be identified, thus enabling this ceremony to happen.”

The Reverend Dr Thompson said:
“Lt Rushton, came from a village from near Wrexham, but joined the 2nd Battalion Royal Irish Regiment in 1909. In August 1914 he had reached the Front where he saved the life of his Commanding Officer and subsequently that of his Adjutant. Pte Roberts, was a young Irishman, born in Dublin. Both he and his two brothers, William and Albert, lost their lives in the conflict. The news of his brother William’s death in action in that month that is talked about still in hushed terms in Ireland, July 1916, must have filled John with much sadness. As he and his brothers, continued to serve, he and his brother Albert lost their lives in action as Albert fell in January 1918 and John fell on 21 August 1918, three months before the ending of the First World War. How the family, back in Dublin, coped with the loss of three sons, one cannot begin to imagine.”

The location of Lt Rushton and Pte Roberts’ graves were discovered after researchers submitted evidence to CWGC suggesting that their final resting places could be identified. After further investigation by CWGC, the National Army Museum and JCCC, the findings of the researchers was confirmed by JCCC.

The headstones over their graves will now be replaced by the CWGC, who will care for their final resting places in perpetuity.

CWGC Commemorations Officer, David Avery, said:
“Thanks to the efforts of many and in the presence of their families, we are honoured to mark the graves of Lieutenant Frederic Hornby Lever Rushton MC and Private John Martin Roberts with new headstones bearing their names. The Commonwealth War Graves Commission ensures that all those who served and fell are commemorated by name and today we renew this commitment to caring for their graves, and their memory with dedication in perpetuity.”