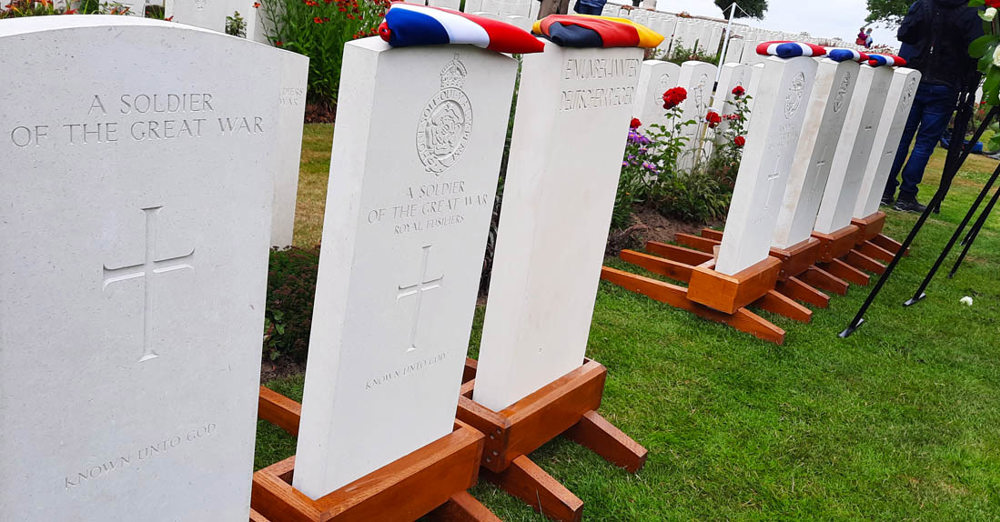 Six Commonwealth soldiers and a German soldier who all died during World War One were buried on Thursday 30 June 2022 in a joint ceremony with the Canadian authorities more than a century after their deaths.

The service, which was the largest of its kind this year, was organised by the MOD’s Joint Casualty and Compassionate Centre (MOD JCCC), also known as the ‘MOD War Detectives’, and was held at the Commonwealth War Graves Commission’s (CWGC) New Irish Farm cemetery in Ypres, Belgium. 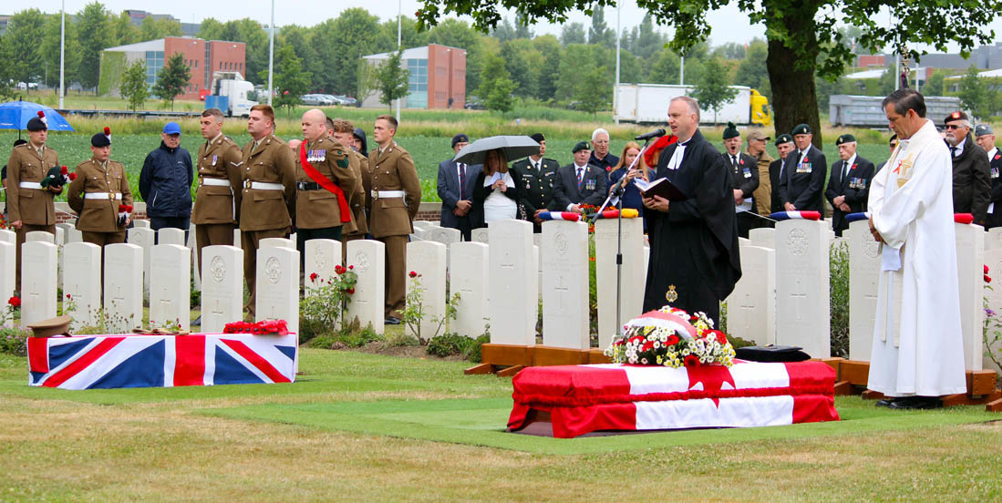 The service was conducted jointly by the Reverend Gary Watt, Chaplain to the First Fusiliers and Father Shawn Daley of the Canadian Army. (Crown Copyright/A.Eden)

The remains were previously recovered from two distinct sites close to one another near the village of St Julien during a planned archaeological dig. One set contained a casualty of the Newfoundland Regiment, a Royal Inniskilling Fusilier, a Hampshire soldier and an unknown soldier of an unknown regiment. The Canadian authorities have managed (through DNA) to name their soldier as Private John Lambert (Newfoundland Regiment) who died on 16 August 1917. Sadly, both the Royal Inniskilling Fusiliers and the Royal Hampshire Regiment have too many casualties killed on 16 August 1917 for the JCCC to be able to attempt identification.

The second set contained the remains of three casualties: an unknown Royal Fusilier, an unknown soldier of unknown regiment and an unknown German soldier. Unfortunately, it has not been possible to establish their date of death.

Louise Dorr, MOD JCCC Caseworker said:
“This has been a long and challenging investigation for us. It’s a matter of great sadness to me personally, that we haven’t been able to identify any of the British soldiers or the German casualty.
“Whoever they were, they were somebody’s son, brother, husband or father. It’s especially poignant that we are burying old enemies together. They all paid the ultimate price of war, and their sacrifice must never be forgotten.” 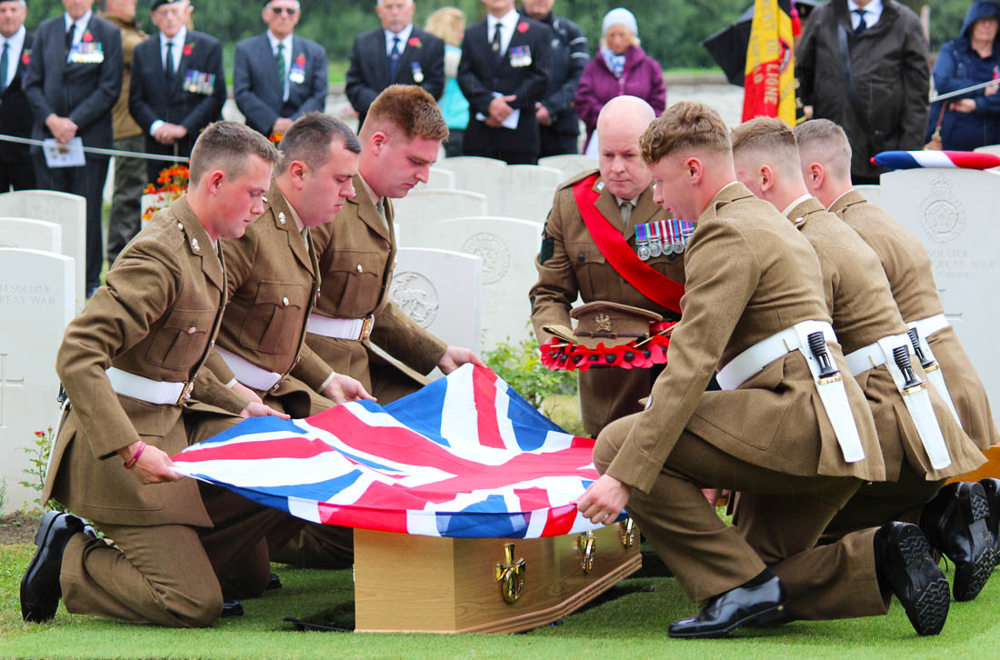 Louise added:
“The soldiers taking part in today’s service can see they walk in the footsteps of the giants who went before them.”

The service was conducted jointly by the Reverend Gary Watt, Chaplain to the First Fusiliers and Father Shawn Daley of the Canadian Army.

The Newfoundland Regiment carry the remains of Private Lambert to his final resting place. (Crown Copyright/A.Eden)

Private John Lambert was buried by his unit, The Royal Newfoundland Regiment. Private Lambert died at the age of 17 in August 1917 at the Battle of Langemarck. His remains were discovered in 2016, and his identification was announced by the Department of National Defence in December 2020.

The Honourable Anita Anand, Minister of National Defence said:
“The families of Canadian soldiers missing in action should know that this country will never forget the ultimate sacrifice made by these courageous men. We cannot put a name on all their headstones, or comfort their loved ones, but their story endures, and the memory of their bravery and dedication to serving Canada will be carried in our hearts.”

The Honourable Lawrence MacAulay, Minister of Veterans Affairs and Associate Minister of National Defence said:
“Those who put on the uniform give up so much in service to Canada and those who make the ultimate sacrifice must never be forgotten – it is our duty to remember them. I join all Canadians in remembering and paying tribute to these courageous soldiers.”

The graves will now be marked by seven headstones provided by the CWGC, who will care for their final resting place in perpetuity.

Liz Woodfield, Director of External Relations at the CWGC, said:
“Today these men have been buried at our cemetery alongside their comrades, with respect and dignity.
“We are honoured to be able to formally recognise Private John Lambert, and although it has not been possible to identify the other casualties, we pay tribute to the ultimate sacrifice they have made. We will ensure the graves of these brave soldiers are cared for with dedication, in perpetuity.”

Dignitaries pay their respects during the service. (Crown Copyright/A.Eden)