A 19-year-old soldier who died in October 1918, has been given a Commonwealth War Graves Commission (CWGC) headstone to commemorate his life and honour him for his sacrifice. 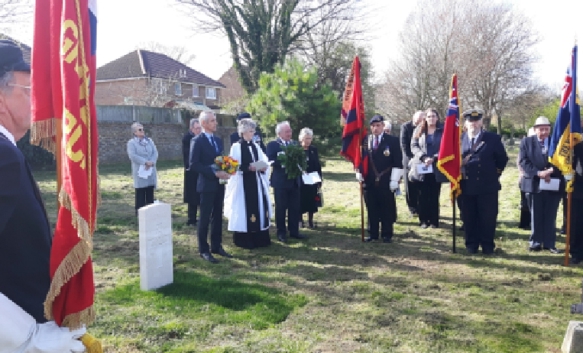 Gunner George Edward Valentine Field was laid to rest at Northfleet Cemetery, but was never properly commemorated as war dead until Andrew Marshall, of the Gravesham War Memorials Trust, discovered his story and contacted the CWGC.

Now, 99 years on, George was remembered for his bravery during the special service on Saturday, March 25, with some of his family members, Andrew Marshall, Deputy Mayor Councillor Harold Craske, MP Adam Holloway and CWGC representatives.

Born in 1899 at Wycliffe Road, Northfleet, to Ellen and George Field, the young George became a farmhand before fibbing about his age and enlisting with the army aged just 16. He served as a gunner in the Royal Field Artillery on the Western Front.

During his army career, George was deployed throughout Northern France, including fighting during the Battle of the Somme. He was gassed twice during active service and was sent to a military hospital before being diagnosed with TB.

He was discharged from the army in June 1917, but sadly died from disease on October 22, 1918 at home in Coopers Road, Northfleet.

Unfortunately, the CWGC were not contacted about his death at the time, and he was therefore buried without a CWGC headstone.

It is estimated that everyone in the UK has at least one war grave within three miles of their front door. The CWGC urge the British public to explore their local war heritage and find the stories behind the headstones.

For more information and to find war graves near your home download our free War Graves app.