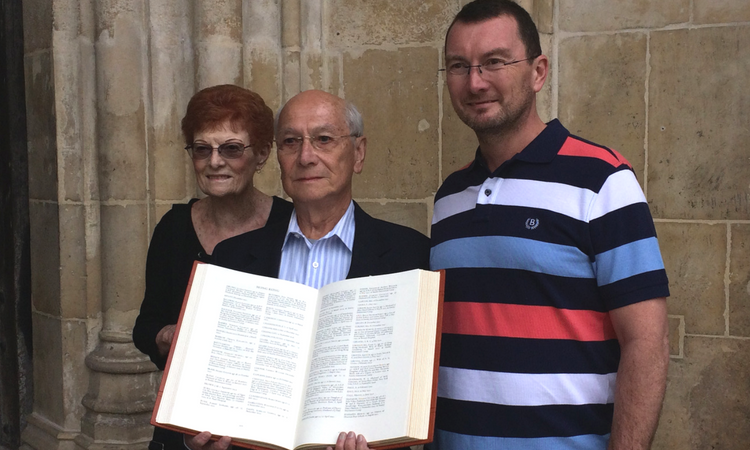 The son of a Second World War civilian hero has travelled half way around the world from his home in Australia to see his father’s name added to the Commission’s Civilian Roll of Honour at Westminster Abbey in London.

The eight volume roll of honour commemorates more than 68,000 Commonwealth civilians whose deaths were due to enemy action during the Second World War. Thanks to new research, more than 130 names – including that of Alfred Ablong – have been added to the roll of honour for the very first time.

Dr Anthony Ablong, from Canberra, was just five years old – the youngest of seven children – when his father, Alfred, was killed during the Japanese invasion of Hong Kong in December 1941.

Despite Alfred’s age, 55, he volunteered to serve as an Air Raid Precautions Warden (A.R.P.) Warden and was placed in charge of a division at Kowloon. During the fighting, he volunteered to secure much needed food and supplies for the defending garrison and starving civilians. On 19 December 1941, during one of these daring raids, he was killed. In the confusion of war Alfred’s name was not reported to the CWGC so that he, and his bravery, could be properly remembered. It was not until almost 80 years later, when his son Dr Anthony Ablong contacted the Commission, that this error of history could be rectified.

Dr Ablong, 81, together with members of his family, visited the CWGC Civilian Roll of Honour at Westminster Abbey today.

Speaking about his pilgrimage Dr Ablong said: “The journey to see my father’s name in the Commonwealth War Graves Commission’s Civilian Roll of Honour at Westminster Abbey is the pinnacle of my life. It will be the biggest emotional event for me as it is the end of my family’s journey from Canberra in Australia to Hong Kong and then London. The visit to Westminster will bring it all together for me.

“I am particularly humbled by the CWGC’s support and overwhelmed by the interest shown, as there were many other families in war ravaged Commonwealth countries that served and suffered badly: worse in many cases than my own. I particularly need to view my father’s commemoration as the event of our family’s contribution and service to Britain in its time of need.”

Alfred’s name is among more than 130 names – many of them of children – added to the CWGC’s Civilian Rolls of Honour for the first time. The individuals, from all regions of the UK and Commonwealth, were missed from the original rolls for various reasons – including war time secrecy. Many of the names have been presented to the CWGC for inclusion following research undertaken by the In From The Cold Project – a group of volunteers who research and identify individuals who may be missing from the official commemorative records.

Among the newly added names are several children who died in tragic wartime accidents – including four brothers, aged 10, 12, 15 and 18, from Essex, who died after hitting a bomb they had found with a hammer, to find out what it was – and three boys from a school in Surrey, aged 11, 12, and 13, who died after a bomb found by a group of boys was taken back to their dormitory, where it fell to the floor and exploded.

During the Second World War, CWGC Founder, Sir Fabian Ware, became concerned that civilian casualties should be properly remembered. He suggested to war-time Prime Minister Winston Churchill that the names of all those civilians who died in the UK and throughout the Commonwealth should be commemorated in handwritten volumes, which would be held at Westminster Abbey. Churchill agreed, but concerns over the potential effect on morale should the figures of civilian deaths become widely known meant the project was shrouded in secrecy.

Today, the Rolls of Honour contain more than 68,000 names and are held in Westminster Abbey – not far from the Tomb of the Unknown Warrior. All of the new names have also been added to the CWGC’s official database of civilian dead from the Second World War. Click here to see all of the new names.

David Royle, the CWGC’s Commemorations Officer who investigated the case, added: “It is a privilege to add Alfred’s name to our records – thereby ensuring his bravery and sacrifice will always be remembered. I was greatly looking forward to meeting Dr Ablong and his family to show them Alfred’s name. It was a very emotional day for us all.”

Alfred’s name is included in two new volumes added to the roll last year. The new volumes were dedicated and blessed during a special service of thanksgiving held at Westminster Abbey in May 2017 to celebrate the 100th anniversary of the founding of the CWGC.