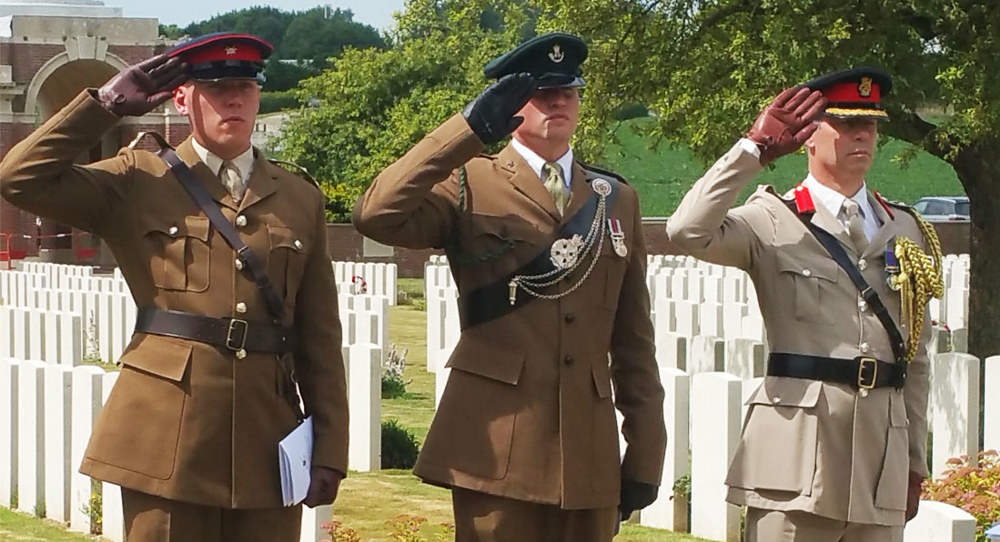 The graves of Captain (Capt) Vivian Hastings Clay and Serjeant (Sjt) Arthur Harry Morton, who were killed on the Western Front whilst serving with antecedent regiments to The Rifles, have been rededicated in northern France more than a hundred years after they died.

The services, which were organised by the MOD’s Joint Casualty and Compassionate Centre (JCCC), also known as the ‘MOD War Detectives’, were held at the Commonwealth War Graves Commission’s (CWGC) Warlencourt British Cemetery on 21 June and Cojeul British Cemetery on 22 June respectively.

Rosie Barron, JCCC case lead said:
“Although the families of Capt Clay and Sjt Morton were unable to attend these rededication services, both men are still fondly remembered by them. It has been an honour to organise these services alongside The Rifles, their regimental family. The two soldiers’ sacrifice and devotion to duty will never be forgotten.”

The graves of both men were identified after researchers contacted the CWGC presenting evidence suggesting they had been found. Further research conducted by the National Army Museum and JCCC confirmed their findings.

The services were conducted by the Reverend Thomas Wilde CF, Chaplain to 2nd Battalion The Royal Anglian Regiment and were attended by serving soldiers of 5th Battalion The Rifles.

The Reverend Wilde said:
“It is always important to honour and remember both officers and soldiers with dignity and providing these services has been a huge privilege for me.”

Capt Vivian Hastings Clay was one of three children born to Challoner Clay and his wife Annie. He graduated from University College Durham in 1914 with a degree in Ecclesiastical Studies.

Vivian was Commissioned into The Wiltshire Regiment on 15 April 1915 and embarked for the Western Front in September 1915. He was promoted to Captain in August 1916.

Capt Clay, from Forvant in Wiltshire, was killed during the Battle of the Somme, on what was his 24th birthday, 18 October 1916. He was serving with 2nd Battalion The Wiltshire Regiment which took part in an attack east of Le Sars that day. The battalion were successful in taking the first German line and were ordered to consolidate. Capt Clay is reported to have been walking about on the top of the trench encouraging his men to consolidate their position when he was fatally shot.

One of his men stated: "After setting a splendid example in grenade throwing, he endeavoured to persuade his men to dig a communications trench to our lines. They were most reluctant, so he and I went out into the open in the hope that they would follow. Almost immediately he was struck in the back."

After the war, Capt Clay’s remains were recovered and buried in Warlencourt British Cemetery as an unknown Captain of The Wiltshire Regiment. As he was missing, Captain Clay was commemorated on the Thiepval Memorial in France.

The new headstone of Capt Clay was fittingly inscribed with an extract from the book of Revelation Chapter 2, Verse 10, which was chosen by his parents for a memorial in their local church, St George’s Church in Fovant: ‘Be thou faithful unto death, and I will give thee a crown of life.’

Sjt Arthur Harry Morton was one of four children born to Arthur Henry Morton and his wife Jessie.

Sjt Morton enlisted into The East Surrey Regiment on 5 March 1915 and arrived on the Western Front on 31 August 1915. He worked as a stretcher bearer until he was gassed in June 1916. He was invalided home and when sent back to France was transferred to The King’s Own Yorkshire Light Infantry.

Sjt Morton, aged 19, from Guildford, Surrey, was killed on 9 April 1917, the first day of the Battle of Arras. He was serving with 9th Battalion The King’s Own Yorkshire Light Infantry which was tasked with an assault on the Hindenburg Line around the Henin-Heninel Road. They were successful at getting through the first line of German wire but were held up at the second line. The attack stalled as they came under rifle and machine gun fire.

The battalion established itself in shell holes within the German wire but were unable to reorganise in daylight as German snipers were very active. At dusk companies of 10th Battalion The King’s Own Yorkshire Light Infantry were seen advancing to occupy the road in front of the enemy’s positions. Members of 9th Battalion were then organised and started digging in on the left of 10th Battalion. It was during the fighting that day that Sjt Morton was killed.

Sjt Morton was buried in Cojeul British Cemetery but his grave was recorded as that of an unknown serjeant of The King’s Own Yorkshire Light Infantry who was killed on 9 April 1917.

The headstones over their graves have been replaced by the CWGC, who will care for their final resting places in perpetuity. Although both families were traced by the JCCC, they were unfortunately unable to attend but both did provide inscriptions for the new headstones.

Xavier Puppinck, Area Director for France at the CWGC, said:
“We are honoured to recognise these two brave soldiers today at our cemeteries in France. It is our privilege and duty to care for their graves in perpetuity.”