There is currently no access to plots C&D rows 1 to 6. The lower gate is closed until further notice. 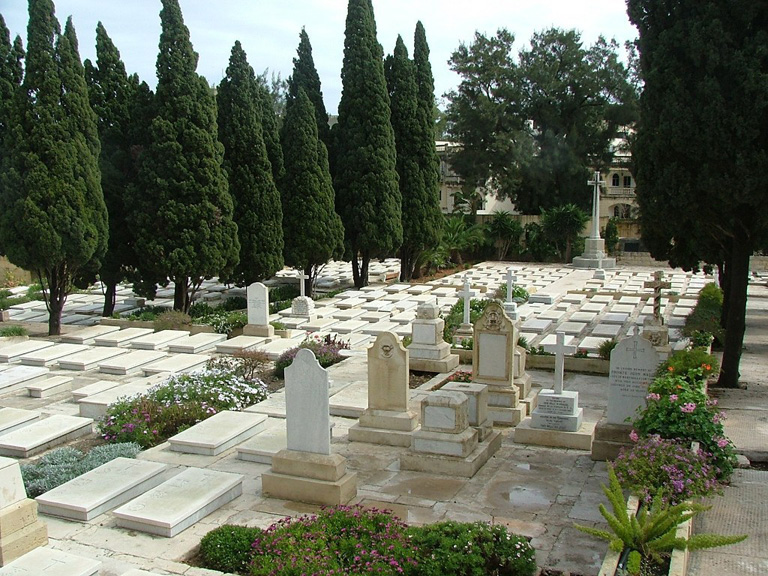 The Cemetery is located in Triq id-Duluri (Our Lady of Sorrows Street), 2 kilometres south-west of Valletta on the road to Sliema. On the edge of the Gwardamanga district, the entrance is on Triq II-Principessa Melita, leading to Triq Tal-Pieta and Msida Sea Front and Creek. Please note that there are several "Our Lady of Sorrows" streets in Malta. Visitors are advised to refer to the google map directions via the link provided to avoid confusion.

Tucked away in the bustling town of Pieta is this tranquil cemetery. The Commonwealth War Graves Commission cares for over 2,000 graves here, of which 1,300 were servicemen. Many of the Commonwealth burials are marked by flat headstones bearing multiple names due to the shallow earth and hard rock found in Malta.

Fascinating people and stories are contained within the cemetery walls. One is as Private Robert Hugh Martin whose injury in 1918 prompted a major advancement in medical history. After being shot in the chest Private Martin underwent complex heart surgery in 1918, the first of its kind in the battlefield.

Also resting here is a true trail blazer, Dr Isobel Tate. Female doctors were extremely rare at start of the 20th century but Dr Tate qualified and answered the call to work with wounded soldiers during First World War. She tragically succumbed to typhoid in 1917 and was laid to rest here.

Whilst here pay a visit the Indian Memorial honouring casualties from what is now India, Pakistan and Nepal. Here you will see names of soldiers, labourers and members of the Gurkha regiments who were cremated at nearly Lazaretto and are commemorated here on the memorial wall.

There are 1,303 Commonwealth casualties of the First World War buried or commemorated at Pieta Military Cemetery, including 20 Indian servicemen who were cremated at Lazaretto Cemetery. Second World War burials number 166. The Commission also cares for 772 non-war graves in the cemetery and 15 war graves of other nationalities.