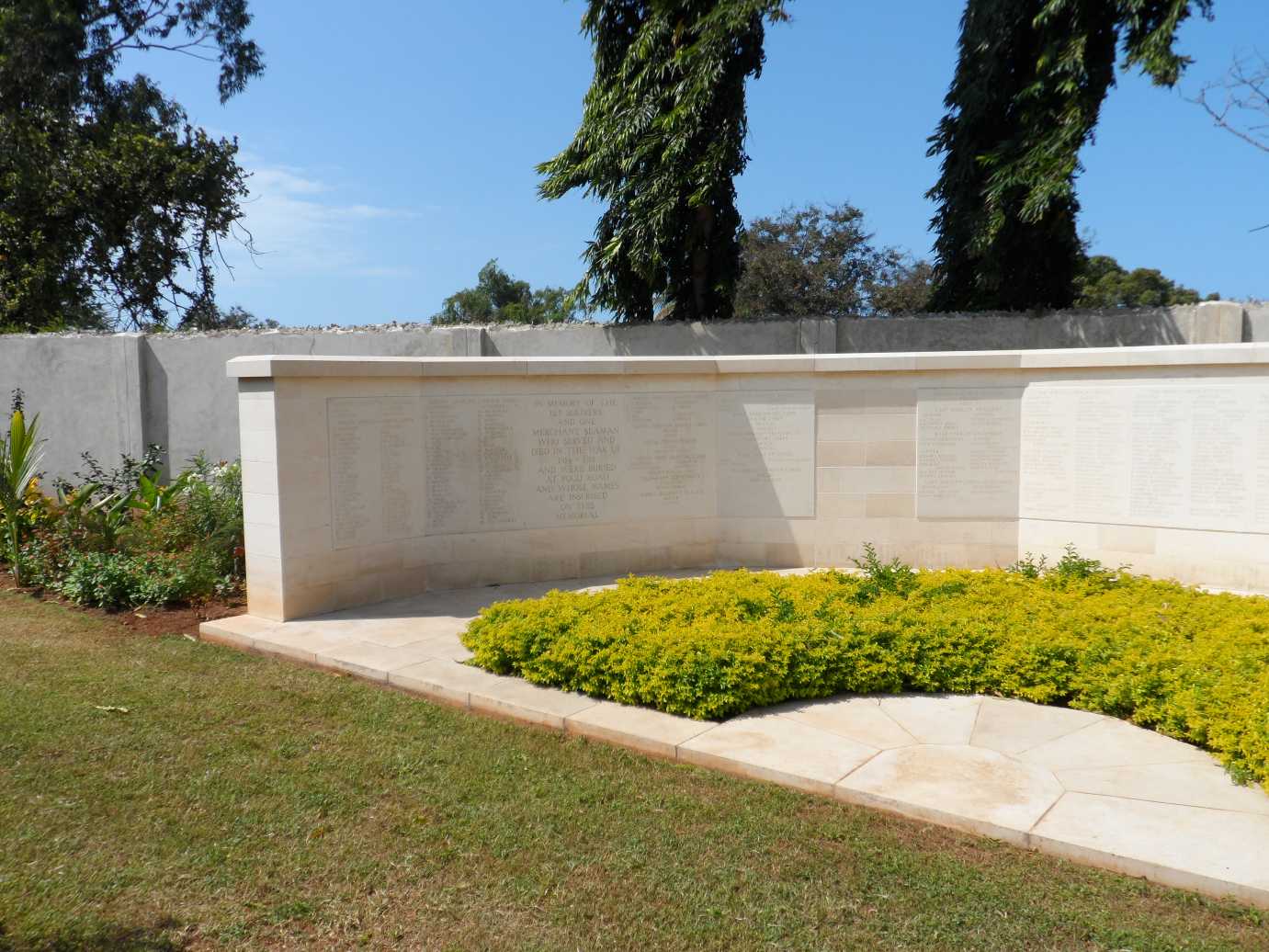 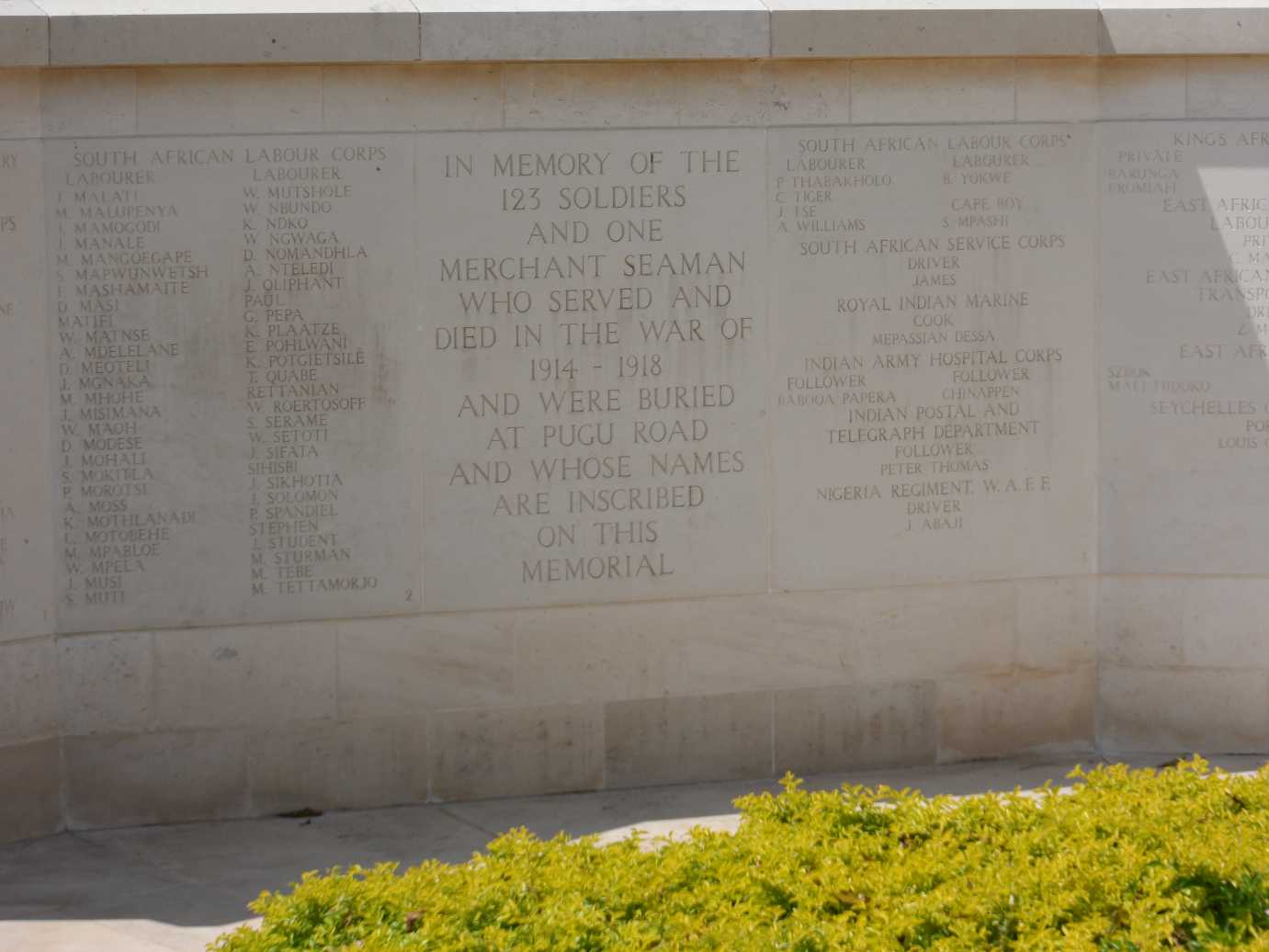 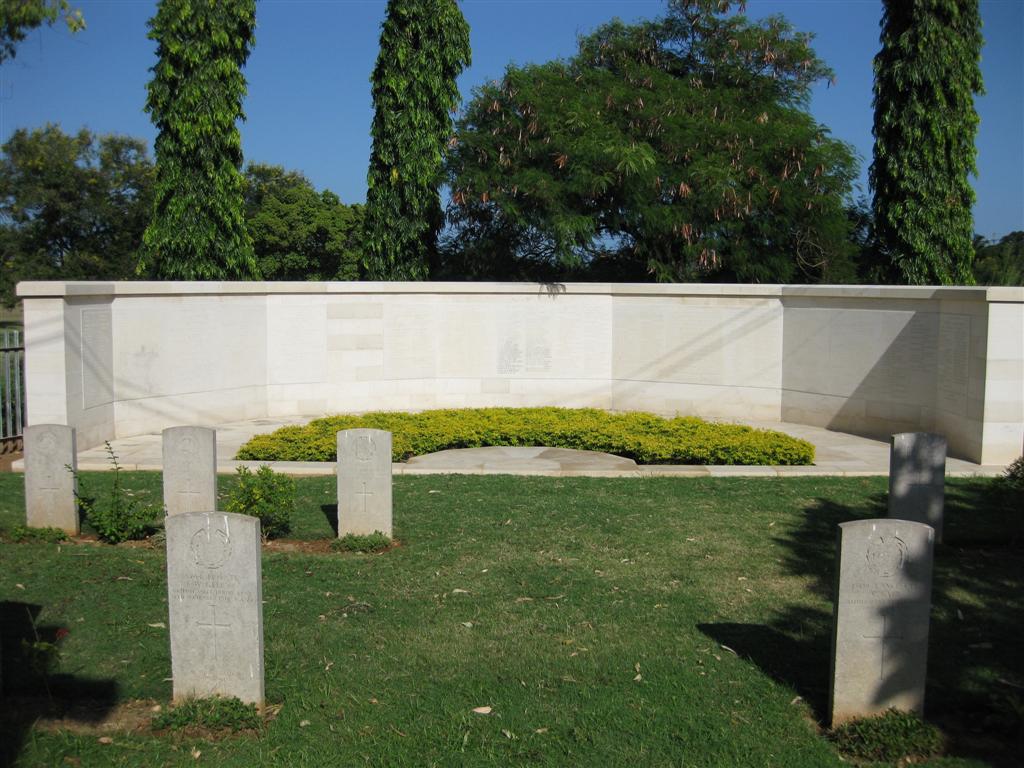 The Pugu Road 1914-1918 Memorial is located in Dar Es Salaam (Upanga Road) Cemetery which is situated on the right (eastern/coastal) side of Upanga Road, approximately 1 kilometre to the north side of Dar es Salaam centre, close to the sea front. (Upanga Road eventually becomes Bagamoyo Road). The cemetery fronts directly onto the road, about 250 metres north-west of the Sheraton Hotel, when coming from the centre of Dar Es Salaam. The Memorial is semi-circular in design and is located to the rear left of the cemetery.

At the outbreak of the First World War Tanzania was the core of German East Africa. From the invasion of April 1915, Commonwealth forces fought a protracted and difficult campaign against a relatively small but highly skilled German force under the command of General von Lettow-Vorbeck. When the Germans finally surrendered on 23 November 1918, twelve days after the European armistice, their numbers had been reduced to 155 European and 1,168 African troops. Dar es Salaam was the capital of German East Africa. On 8 August 1914, the first recorded British action of the war took place here, when HMS "Astraea" shelled the German wireless station and boarded and disabled two merchant ships - the "Konig" and the "Feldmarschall". The Royal Navy systematically shelled the city from mid-August 1916, and at 8 am on 4 September the deputy burgomaster was received aboard H.M.S. "Echo" to accept the terms of surrender. Troops, headed by the 129th Baluchis, then entered the city. On 12 September 1916, Divisional GHQ moved to Dar es Salaam, and later No 3 East African Stationary Hospital was stationed there. The town became the chief sea base for movement of supplies and for the evacuation of the sick and wounded. The PUGU ROAD 1914-18 MEMORIAL stands in Dar es Salaam (Upanga Road) Cemetery. It commemorates 124 casualties buried in Dar Es Salaam (Pugu Road) Christian Cemetery which could no longer be maintained to a satisfactory standard. DAR ES SALAAM (UPANGA ROAD) CEMETERY was opened as a war cemetery in March 1918 when the European section of Ocean Road Cemetery was closed. After the Armistice, Commonwealth and German graves were brought into this site from Kidete, Lansi and Utete Cemeteries. The cemetery now contains 231 Commonwealth burials of the First World War. Standing towards the rear boundary of the cemetery, this memorial forms part of the TANGANYIKA MEMORIAL, which commemorates over 350 African troops who died in Tanganyika during the Second World War while serving in the East African Forces whose graves cannot be satisfactorily maintained or are unknown.