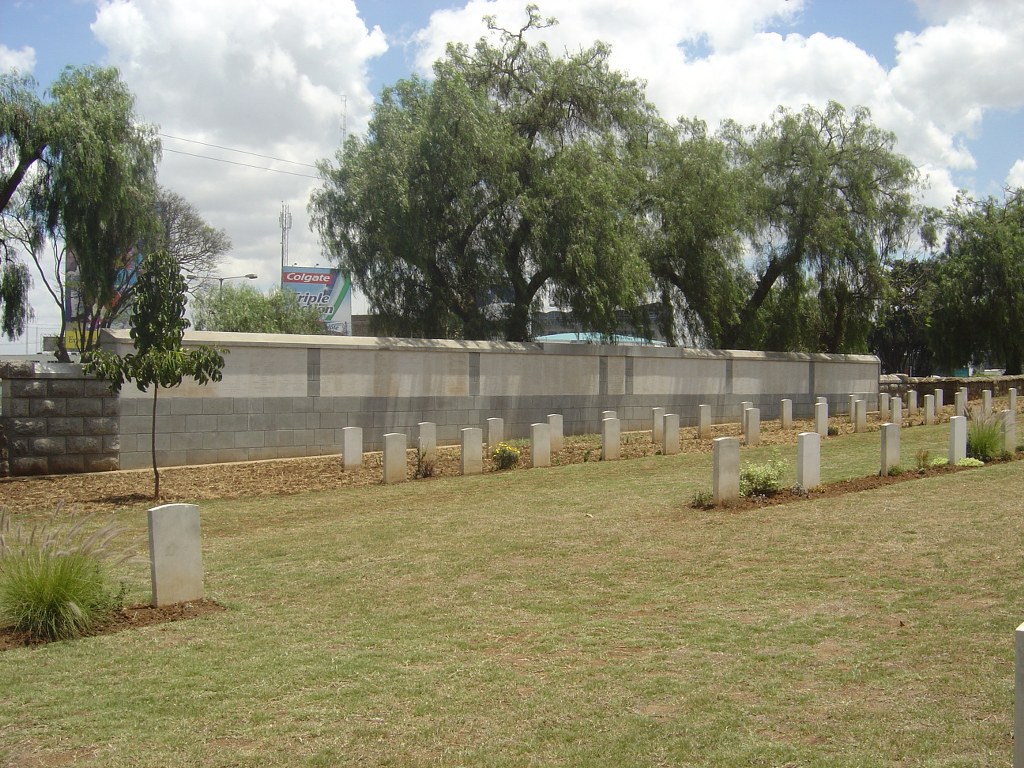 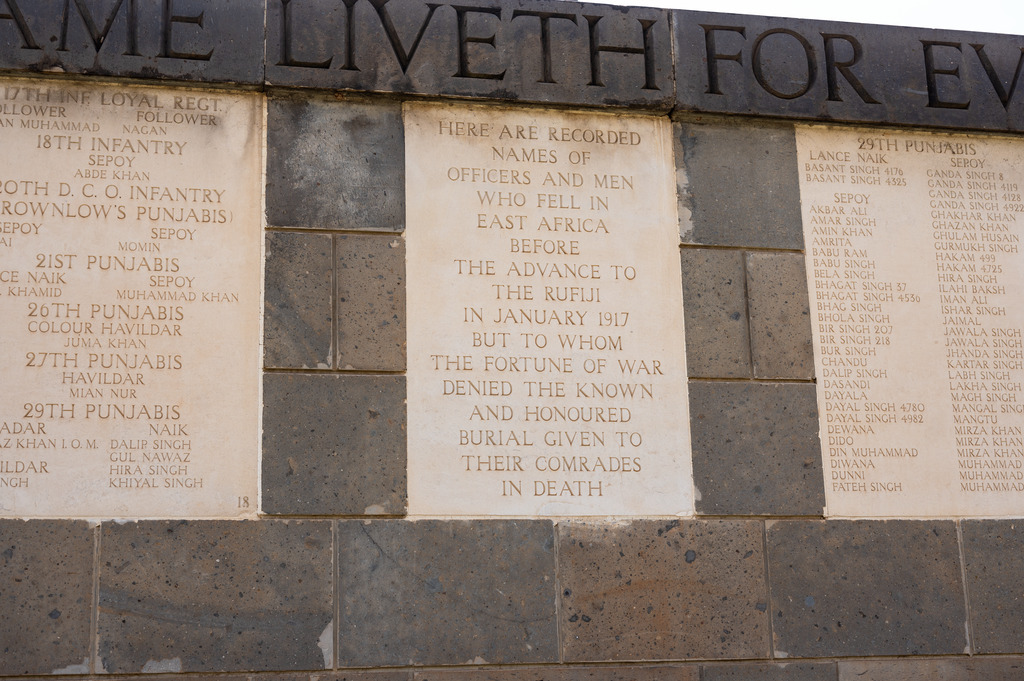 The Memorial is built into one of the walls of Nairobi South Cemetery. The cemetery is located 3 kilometres south-east of the city centre on Uhuru Highway, leading from the airport to Nairobi town centre. Coming from the airport, the cemetery is found directly beside the road on the left, adjacent to the Banyala roundabout. This is the first roundabout after the Nyayo National Station. The wide dirt road leading to the cemetery entrance is marked by a CWGC direction sign.

(References to place names and military units are those in use at the time of the First World War) The outbreak of War was not expected by either side in East Africa, and a considerable proportion of the King`s African Rifles, the only standing British military force, was engaged in operations in Jubaland at the time; but the military authorities in German East Africa had already decided in favour of an attack on the Uganda Railway when the time should come. The railway ran, throughout its length, within a hundred miles of the frontier, and in places it was considerably nearer. The German force numbered about 5000 indigenous soldiers and a small number of German officers. In pursuance of the German plan of campaign, Taveta, and inland town between the frontier and the railway, was seized on the 15th August, and a number of raids, not only on the East African Protectorate but also on Uganda, Nyasaland the Belgian Congo and Northern Rhodesia, were carried out. A Belgian steamer was sunk on Lake Tanganyika, and the Germans obtained control of the Lake. The British authorities on the other hand controlled the sea and Lakes Nyasa and Victoria. The King`s African Rifles were summoned back and small Volunteer and Arab forces were raised; the 29th Punjabis, the first contingent of Indian Expeditionary Force "B" arrived at Mombasa at the end of August. A little later the 2nd Rhodesia Regiment and the 25th Royal Fusiliers were added to the forces available. Attempts were made to occupy positions in German East Africa. The attacks on the harbour of Tanganyika and the inland town of Longido, both made at the beginning of November 1914, were unsuccessful, and a small Indian force which occupied Jasin (on the coast of the Indian Ocean immediately South of the frontier) was besieged and captured.

The year 1915 passed without any serious engagement, and neither side obtained any considerable advantage, but early in 1916 the conduct of the campaign passed to the South African Government, and the British troops were strongly reinforced from South Africa. The general plan already adopted was confirmed: British forces were to invade German East Africa from the North, from Uganda and from Rhodesia, while the Belgians were to advance across Lake Tanganyika and the Portuguese, who entered the War in March 1916, were to close the Southern border of the German territory. Meanwhile British control of Lake Tanganyika had been obtained by two vessels carried overland from Cape Town and launched on the Lake.

The invasion from the North, carried out with the utmost vigour, was the main factor in the campaign. In March 1916, Taveta and Moshi were encircled and occupied. In April, Kondoa Irangi was captured, and on the 9th May a strong German counter-attack on the town was beaten off. The Central Railway was reached in July; on the 26th August Morogoro was occupied, and the Northern half of the country had fallen into British hands. From the West and the South-West Belgian and British forces were breaking in. The German commander then, as throughout the campaign, saved the greater part of his force from capture; he escaped into the Uluguru mountains, and at Kisaki he fought a successful rearguard action.

In September, the German ports were occupied by British land and sea forces. The Belgians took Tabora. Considerable reinforcements of West African troops reached the British sphere. The Germans forces concentrated at Mahenge, South of the Rufiji river, and delivered a number of desperate and unsuccessful sorties. December 1916, saw the beginning of the British advance to the Rufiji, and the events to which this Memorial relates ended.

Upon the panels of the memorial are carved the names of over 1,200 British and Indian officers and men. The central panel is inscribed with the words:

"Here are recorded names of officers and men who fell in East Africa before the advance to the Rufiji in January, 1917, but to whom the fortune of war denied the known and honoured burial given to their comrades in death."

The later casualties are commemorated by a similar Memorial at Dar es Salaam.