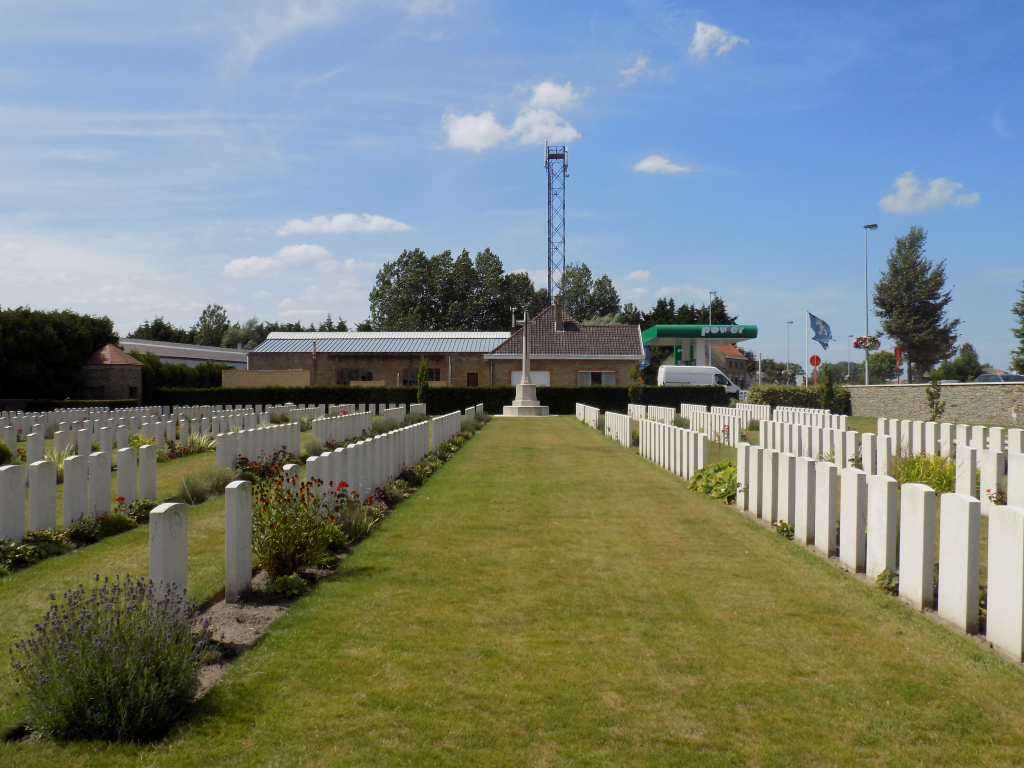 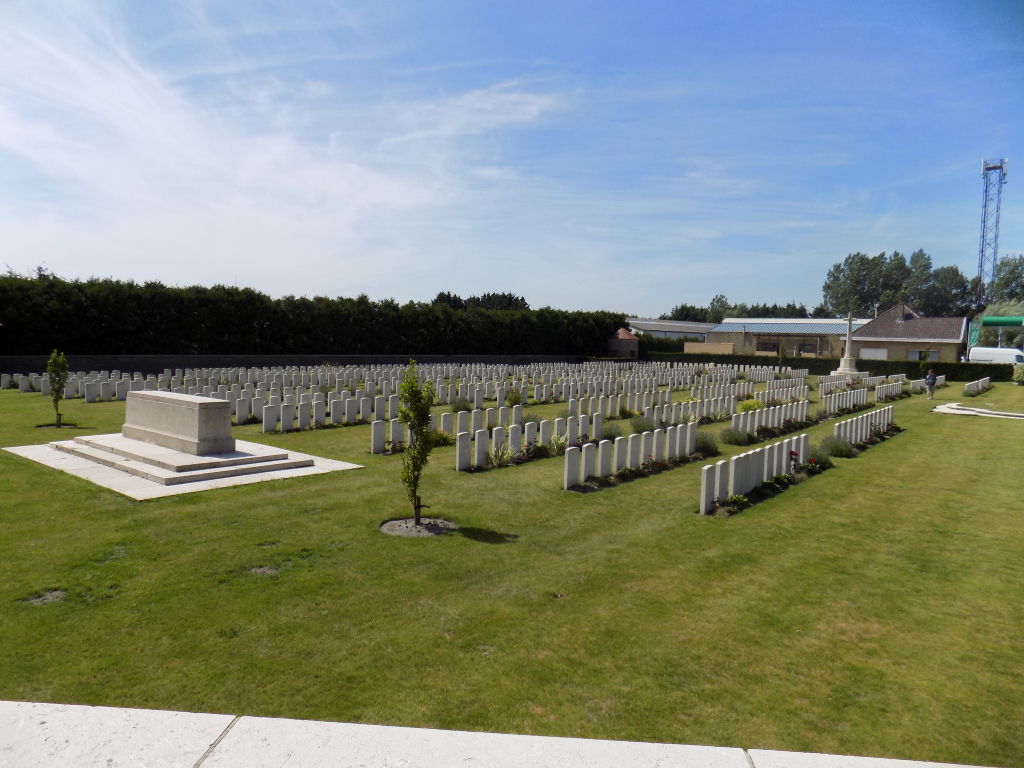 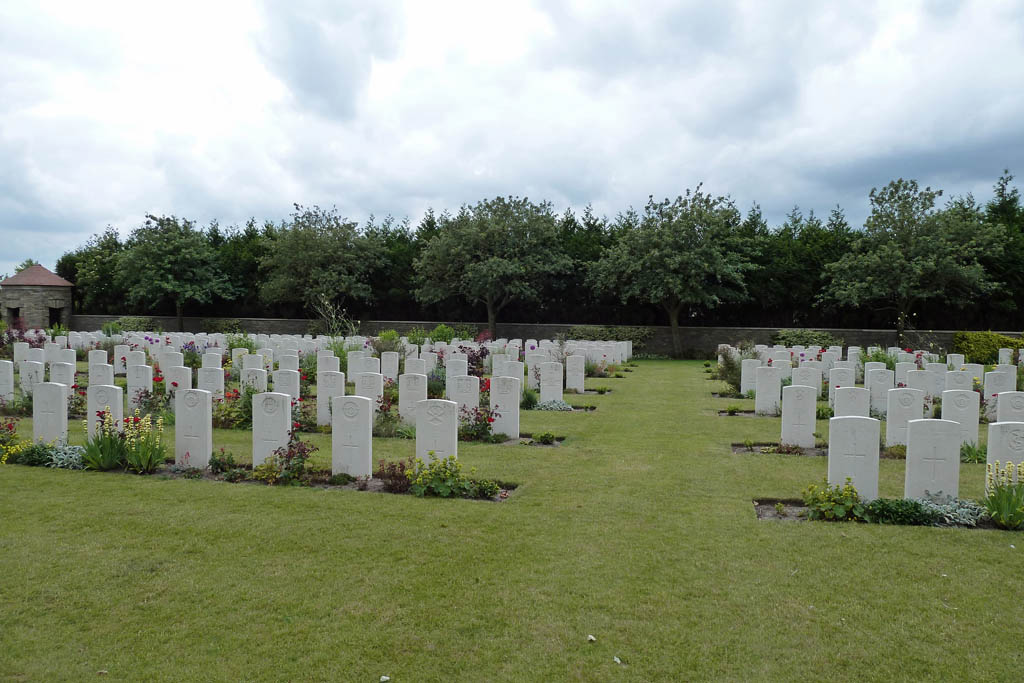 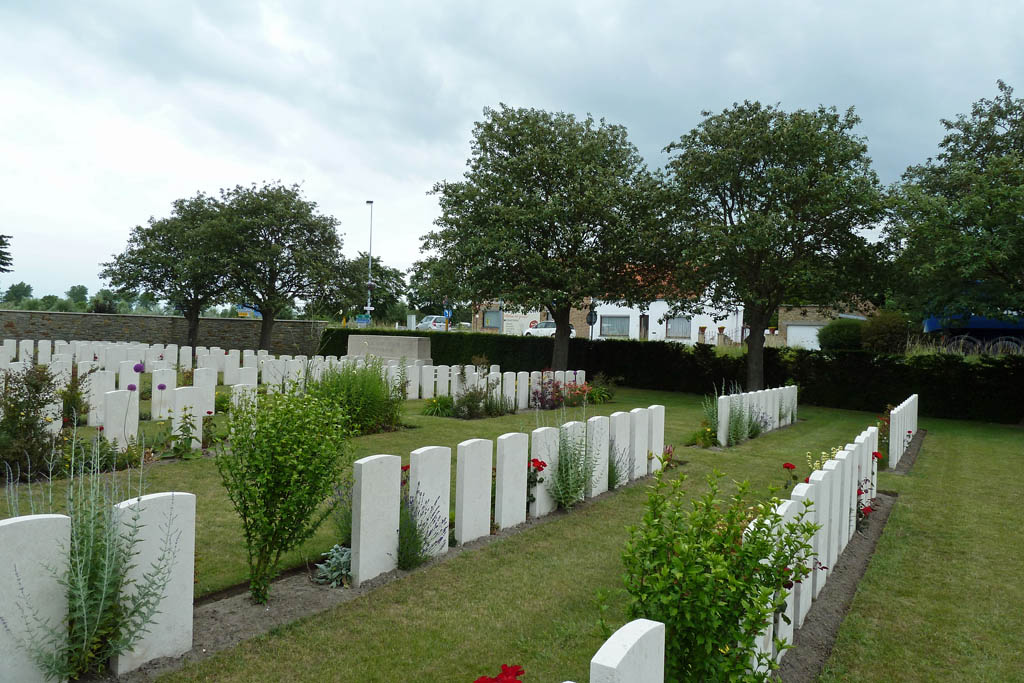 Ramscappelle Road Military Cemetery is located 2 Kms east of Nieuwpoort on the N367, which leads from Nieuwpoort to Sint Joris. From Nieuwpoort town centre the Willem Deroolaan leads for 500 metres onto the N367 Brugsesteenweg. The cemetery lies 1 Km along the N367 on the junction with the N356 Ramskapellestraat.

From June to November 1917, Commonwealth Forces (XV Corps) held the front line in Belgium from St.Georges (now Sint Joris), near Ramskapelle, to the sea. Most of Plot I of Ramscappelle Road Military Cemetery was made in July and August 1917, but the cemetery was considerably enlarged after the Armistice when graves were brought in from the battlefields and the following smaller burial grounds:- BOITSHOUCKE CHURCHYARD, where three men of the R.G.A. were buried in July and August, 1917. GHISTELLES GERMAN CEMETERY, on the road to Hagebrugge, where four airmen were buried by the enemy in 1917 and 1918 and two by their comrades in October, 1918. MIDDELKERKE GERMAN CEMETERY, on the coast road to Ostende, where twelve Canadian and ten United Kingdom soldiers were buried in 1915-1917. NIEUPORT MILITARY CEMETERY, on the South side of the town, a French cemetery in which 107 British soldiers and one sailor were buried. It was closed in July, 1917 as excessively dangerous. NIEUPORT-BAINS MILITARY CEMETERIES No.1, No.2 and No.3, OOST-DUNKERKE, French cemeteries close together at the West end of Nieuport-Bains. No.1 contained one British grave of 1917, No.2 two of 1918, and No.3 91 (including two Australian) of 1916-17. There are now 841 Commonwealth casualties of the First World War buried or commemorated in this cemetery. 312 of the burials are unidentified, but special memorials commemorate two casualties known or believed to be buried among them. Also within this number are 26 special memorials to casualties originally buried at Nieuport or Nieuport-Bains whose graves were destroyed by shell fire. There are an additional 2 unidentified Foreign National burials here. The cemetery was designed by Sir Edwin Lutyens.