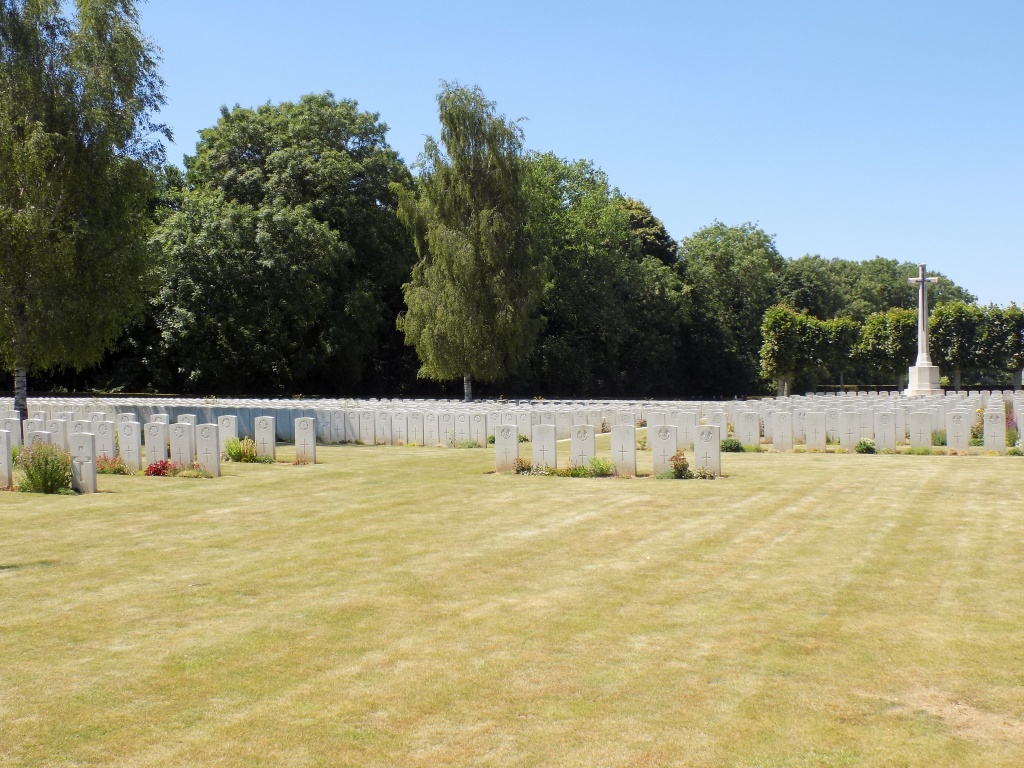 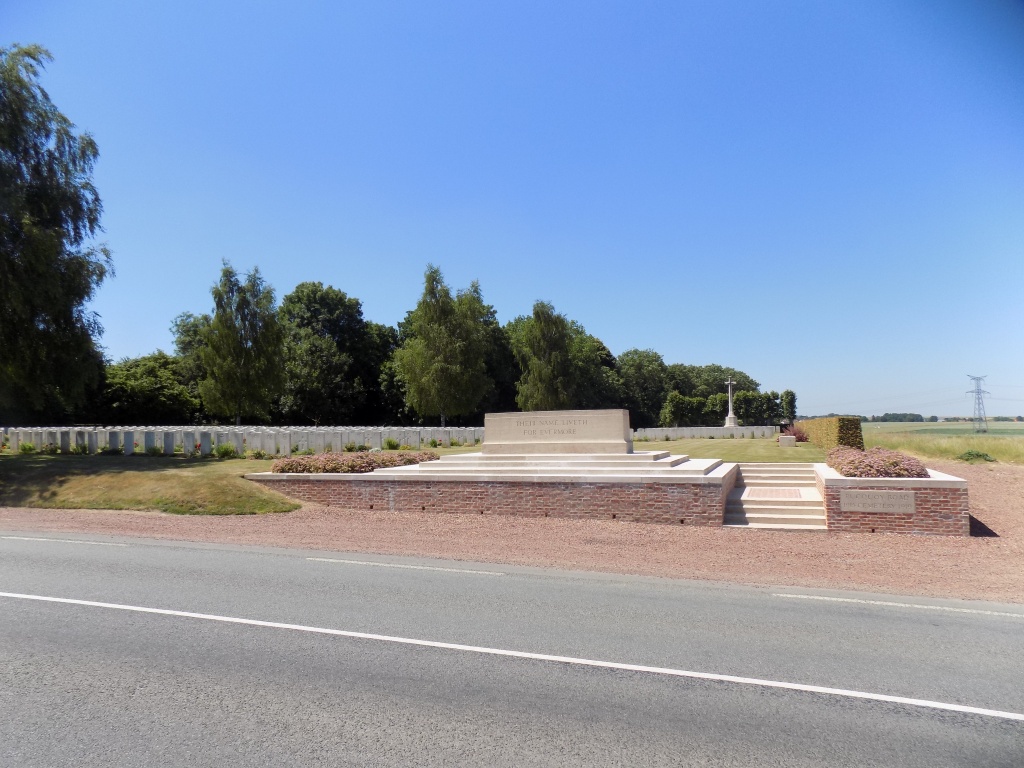 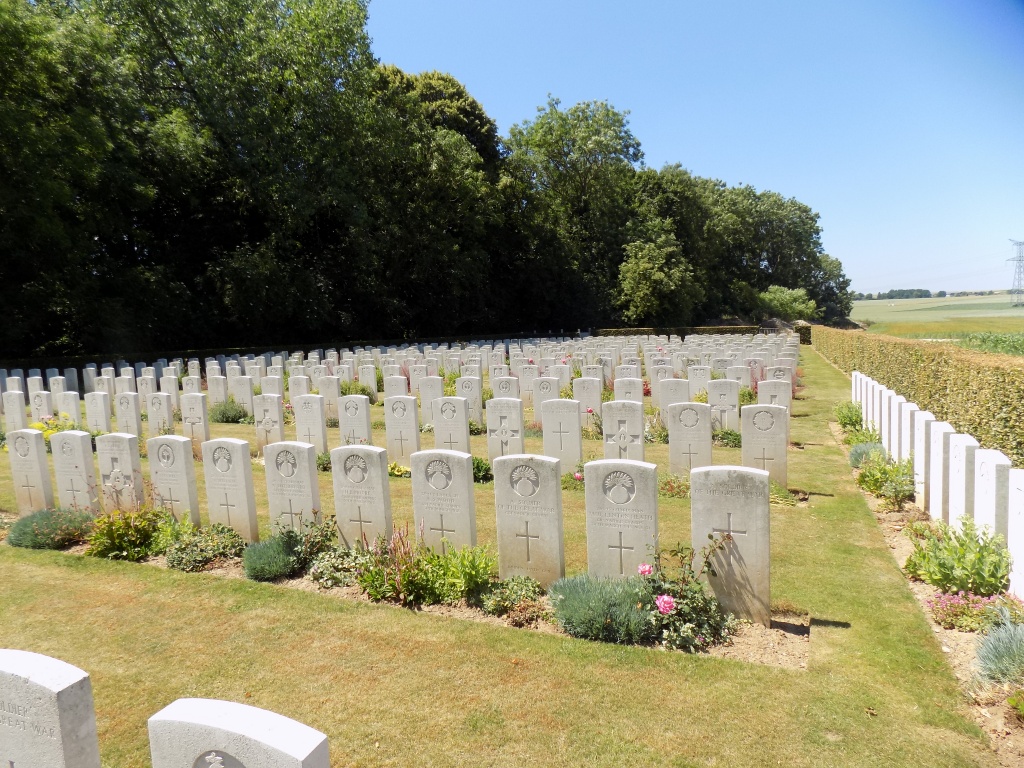 Bucquoy Road Cemetery is situated on the D919 heading south from Arras to Ayette. The Cemetery is on the right hand side of the road, 9 kilometres from Arras, just before a crossroads with the D36 between Ficheux and Boisleux-au-Mont.

In November 1916, the village of Ficheux was behind the German front line, but by April 1917, the German withdrawal had taken the line considerably east of the village and in April and May, the VII Corps Main Dressing Station was posted near for the Battles of Arras. It was followed by the 20th and 43rd Casualty Clearing Stations, which remained at Boisleux-au-Mont until March 1918, and continued to use the Bucquoy Road Cemetery begun by the field ambulances. From early April to early August 1918 the cemetery was not used but in September and October, the 22nd, 30th and 33rd Casualty Clearing Stations came to Boisleux-au-Mont and extended it. By the date of the Armistice, it contained 1,166 burials but was greatly increased when graves were brought in from the surrounding battlefields and from small cemeteries in the neighbourhood.

The more sizeable of the small cemeteries concentrated into Bucquoy Road Cemetery were the following:-.

BOIRY-STE. RICTRUDE BRITISH CEMETERY, on the West side of that village, contained 16 graves of soldiers from the United Kingdom (mainly 56th (London) Division), who fell in March and April, 1917.

BOISLEUX-ST. MARC BRITISH CEMETERY, between Boisleux-st Marc and Boyelles, contained ten graves of soldiers from the United Kingdom (nine of the 2/1st London Regiment) who fell in March and May, 1917.

BOISLEUX-ST. MARC MILITARY CEMETERY (or MERCATEL ROAD CEMETERY), South of Mercatel, contained eleven graves of soldiers from the United Kingdom who fell in March and April, 1917.

CROSS ROADS CEMETERY, BOISLEUX-ST. MARC, a little East of that village, contained 25 graves of soldiers from the United Kingdom (18 of the 1st London Scottish) who fell in August and September, 1918.

BUSHES CEMETERY, BOISLEUX-ST. MARC, a little South of that village, containing 17 graves of soldiers of the 1st Grenadier Guards who fell in March and April, 1918.

HAMELINCOURT BRITISH CEMETERY, between Courcelles and Hamelincourt, contained the graves of eight soldiers of the 3rd Grenadier Guards who fell on the 22nd-24th August, 1918.

HAMELINCOURT COMMUNAL CEMETERY EXTENSION, contained 20 graves of soldiers from the United Kingdom who fell in March, August and September, 1918.

MONCHY-AU-BOIS BRITISH CEMETERY, on the North-East side of that village, contained the graves of 14 soldiers (twelve of the 42nd (East Lancs) Division) who fell in March, 1918.

HENIN-SUR-COJEUL GERMAN CEMETERY, in the South-West quarter of that village, where 28 soldiers from the United Kingdom were buried by their comrades in April and May, 1917.

The cemetery now contains 1,901 burials and commemorations of the First World War. 168 of the burials are unidentified but there are special memorials to 23 casualties known or believed to be buried among them. Other special memorials commemorate 21 casualties buried by their comrades in Henin-sur-Cojeul German Cemetery, whose graves could not be found on concentration.

The cemetery was used again in May 1940 for the burial of troops killed during the German advance. There are 136 burials and commemorations of the Second World War; 26 of the burials are unidentified and special memorials commemorate 39 soldiers whose graves in the cemetery could not be specifically located.