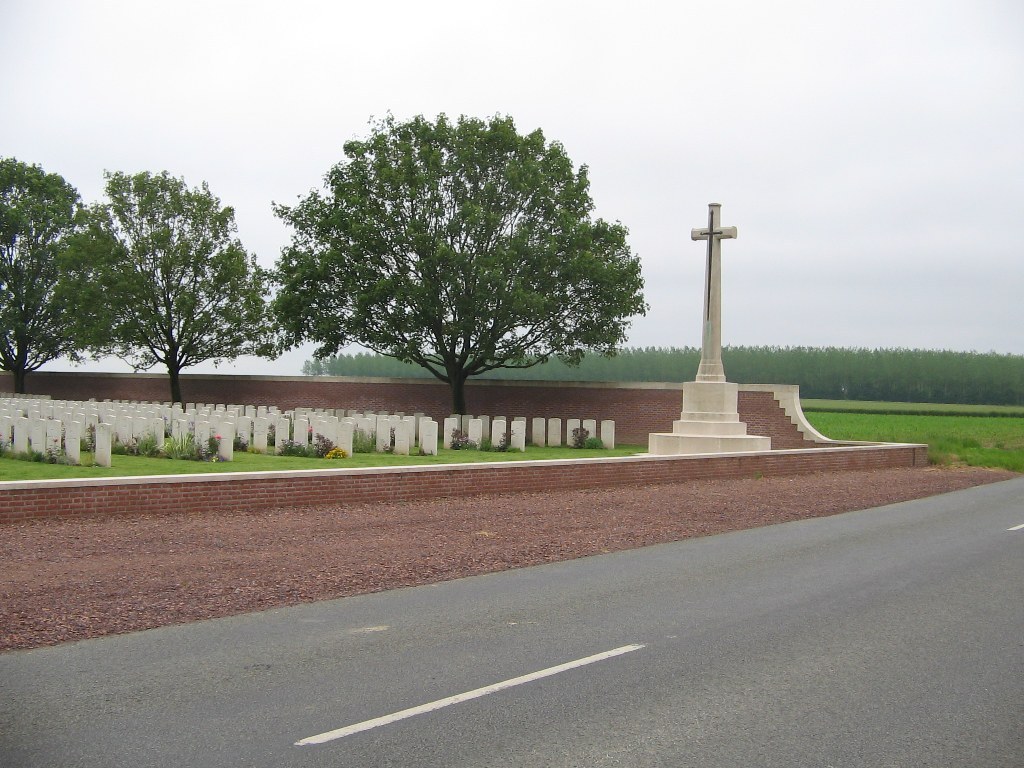 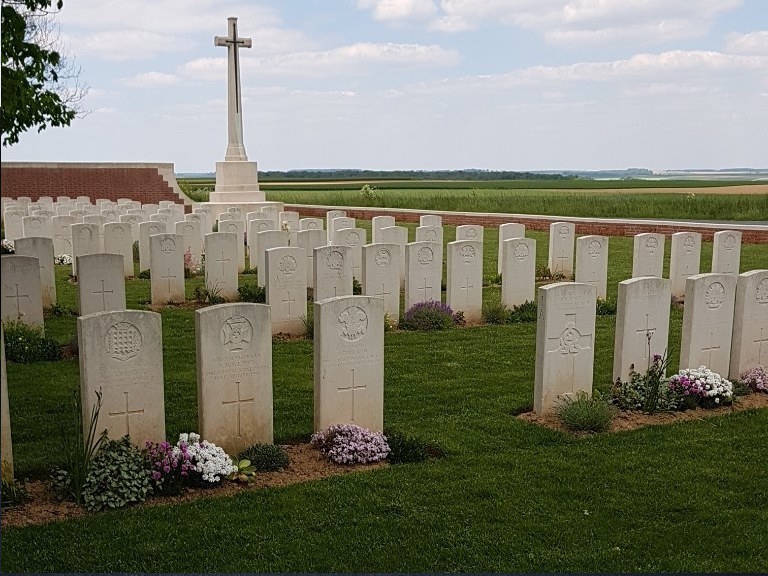 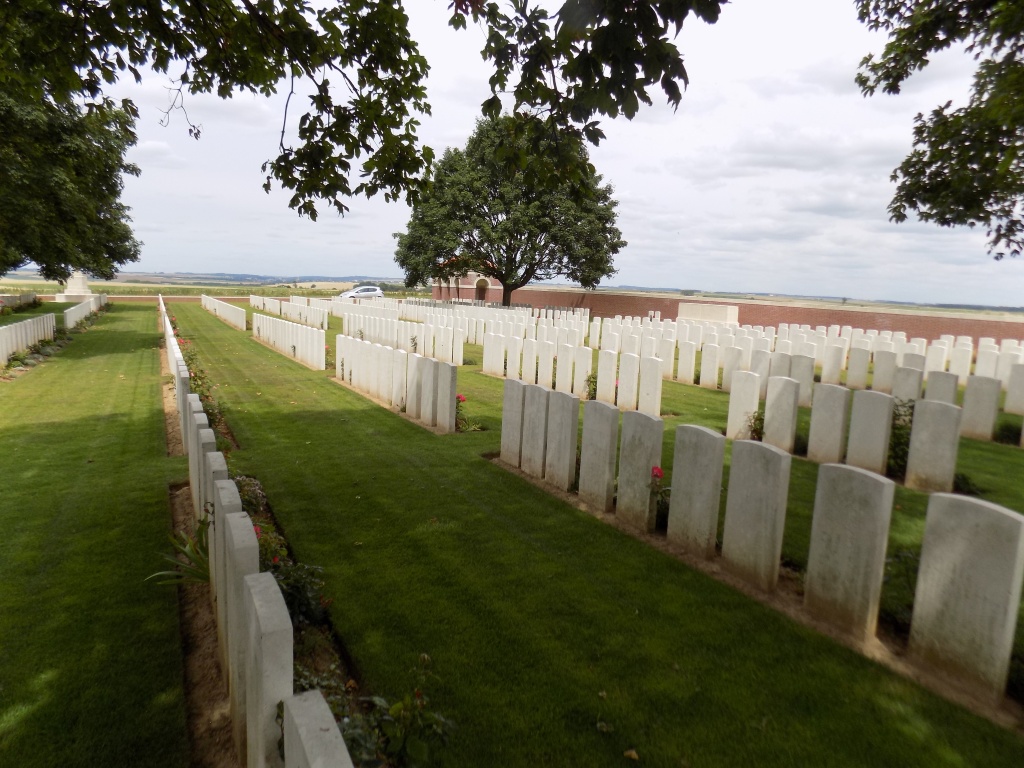 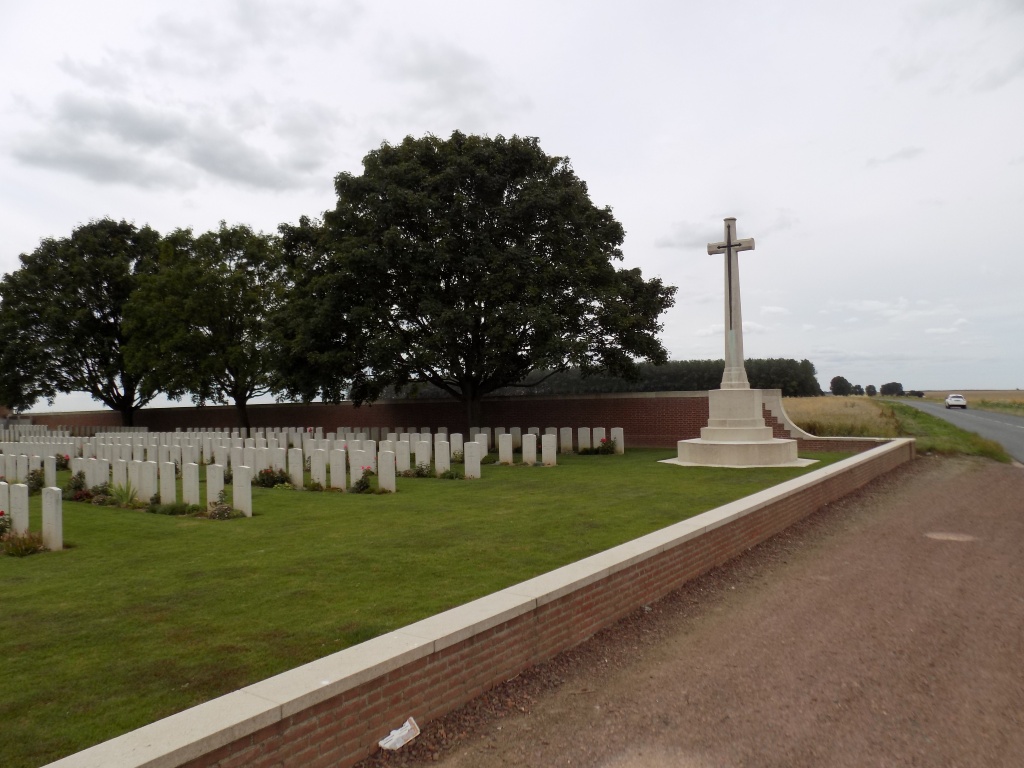 Sailly-Laurette is a village 19 Kms east of Amiens and 9 Kms south-west of Albert. Enter Bray-sur-Somme via Albert on the D329 and carry straight on into the village. Turn right in the direction of Corbie-Amiens, on the D1 heading west. Leave Bray-sur-Somme on the D1 and carry on for 7.3 Kms. Beacon Cemetery is 500 metres after the junction with Morlancourt-Sailly Laurette, on the left hand side of the D1, in the direction of Amiens-Corbie. There are no CWGC signposts.

This part of the Somme did not see fighting until 26-27 March 1918, when the Third Army withdrew to a line between Albert and Sailly-le-Sec ahead of the German advance. This line was held until 4 July, when it was advanced nearly to Sailly-Laurette, and on 8 August, the first day of the Battle of Amiens, Sailly-Laurette and the road to Morlancourt were disengaged.

The cemetery (named from a brick beacon on the summit of the ridge a little south-east of the village) was made by the 18th Division Burial Officer on 15 August when the 12th (Eastern), 18th and 58th (London) Divisions attacked from the Ancre to the Somme and the Australian Corps beyond the Somme. At the Armistice, the original burials numbered 109 (now Plot III, Rows C, E, G and I), chiefly from the 12th Division, but it was then greatly increased when graves were brought in from the surrounding battlefields and some smaller burial grounds, including:-

CROYDON CEMETERY, GLISY, on the South side of the Amiens-Villers Bretonneux road and a little West of the Glisy-St. Nicolas road. It contained the graves of fourteen soldiers from the United Kingdom and thirteen from Australia, who fell in May-August, 1918.

SUSSEX CEMETERY, SAILLY-LAURETTE, about 900 metres East-South-East of Beacon Cemetery. It was made by the 12th Division Burial Officer on the 16th-21st August, and it contained the graves of 43 soldiers from the United Kingdom (largely of the 7th Royal Sussex) and one from Australia, all of whom fell on the 8th August.

TAILLE WOOD CEMETERY, ETINEHEM, on the South side of the Corbie-Bray road where it passes through the wood. It contained the graves of sixteen soldiers from Australia, and two from the United Kingdom, who fell on the 13th-23rd August, 1918.

Beacon Cemetery now contains 772 burials and commemorations of the First World War. 257 of the burials are unidentified but there are special memorials to four casualties known or believed to be buried among them.