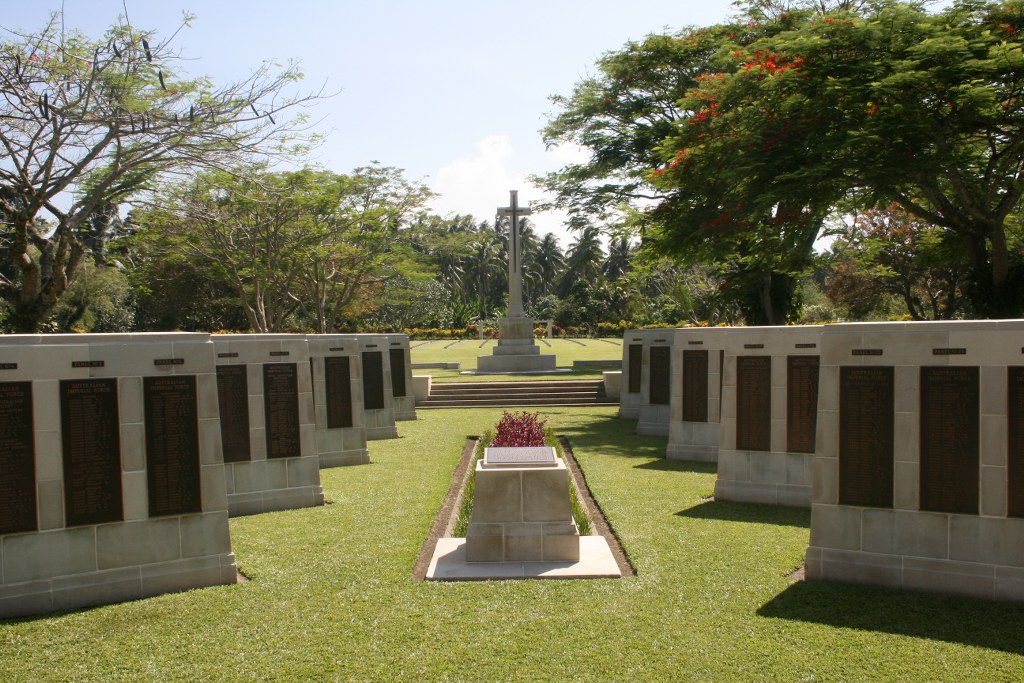 Rabaul lies on Blanche Bay inside the hook-nosed north-eastern tip of the Gazelle Peninsula of New Britain, the largest and most important island of the Bismarck Archipelago. The Memorial is situated in Rabaul (Bita Paka) War Cemetery, which is located approximately 50 kilometres south of Rabaul, and approximately 5 kilometres south-west of Kokopo.

Between 1884 and 1914, New Britain was known as New Pomerania and part of German New Guinea. On the 11th September 1914, in one of Australia's first actions of the 1914-18 war, its troops seized the German wireless station at Bitapaka near Rabaul. After the war, the island became part of the Territory of New Guinea, which was an Australian mandated territory. The site of the wireless station became the War Cemetery.

Small forces on New Ireland, which lies near and north-north-east of New Britain, had been attacked and overwhelmed on January 21st, 1942. It was not until November 1944 that New Britain was again the scene of fighting, when the 5th Australian Division landed at Jacquinot Bay, and the 11th Division at Wide Bay. The two Divisions cleared the north and south coasts and bottled up the enemy in the Gazelle Peninsula. Here the Japanese were contained until the final surrender in August 1945, when the number of their troops was found to be nearly 90,000.

The Rabaul Memorial commemorates over 1,200 members of the Australian Army (including personnel of the New Guinea and Papuan local forces and constabulary) and the Royal Australian Air Force, who lost their lives in New Britain and New Ireland in January and February 1942 or who were lost as a result of the sinking of the S.S. Montevideo Maru in July 1942 and those in New Britain from November 1944 to August 1945, who have no known grave. Men of the Royal Australian Navy who lost their lives in the south-western Pacific region and who have no graves but the sea, are commemorated on Plymouth Naval Memorial in England along with many of their comrades of the Royal Navy and other Commonwealth Naval Forces.

The Memorial takes the form of an avenue of stone pylons leading from the entrance building to the Cross of Sacrifice. Bronze panels bearing the names are affixed to the faces of the pylons. A central stone lectern at the commencement of the avenue carries a bronze plate with the following dedicatory inscription:

IN THIS PLACE ARE RECORDED THE NAMES OF OFFICERS AND MEN OF THE BRITISH COMMONWEALTH OF NATIONS WHO DIED DURING THE 1939-1945 WAR IN THE NEW BRITAIN AREA, ON LAND, AT SEA AND IN THE AIR, BUT TO WHOM THE FORTUNES OF WAR DENIED THE KNOWN AND HONOURED BURIAL GIVEN TO THEIR COMRADES IN DEATH