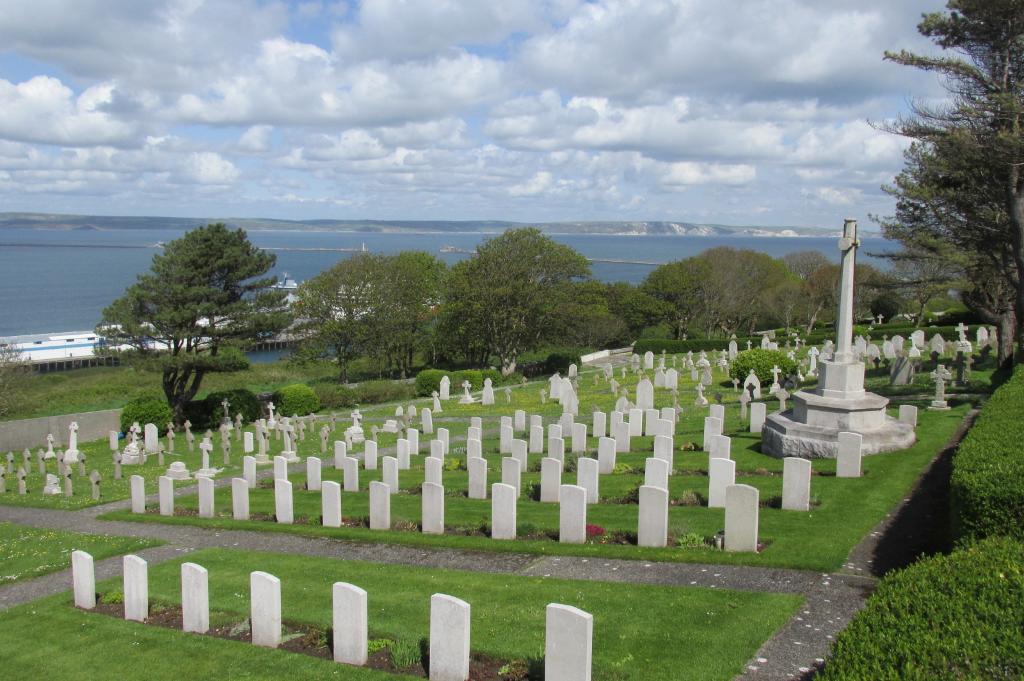 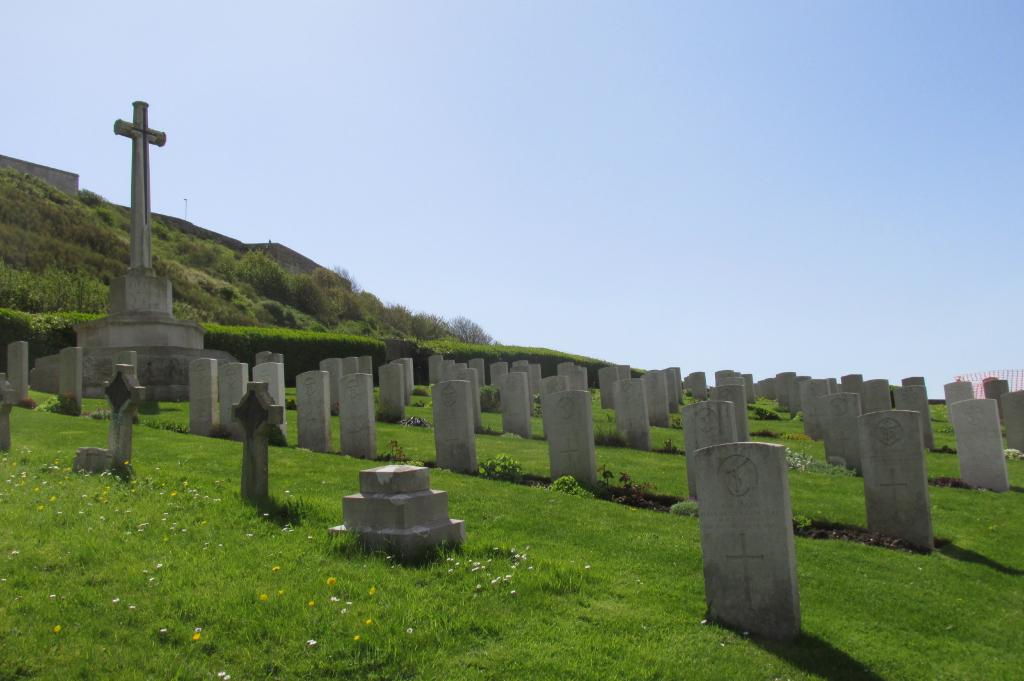 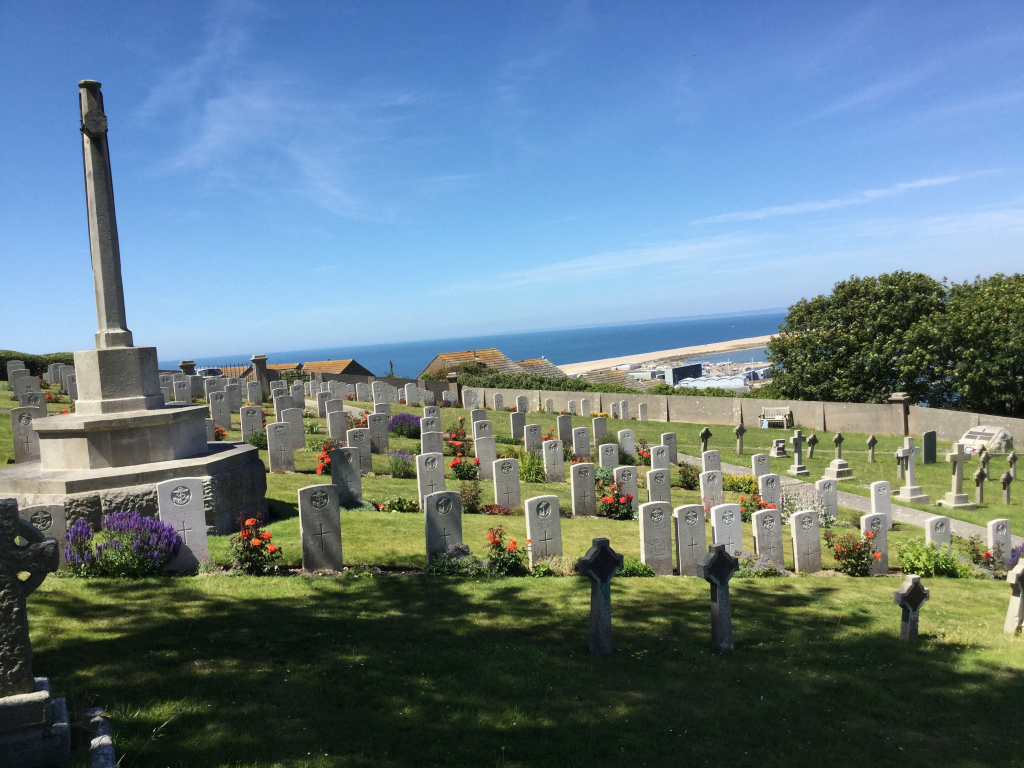 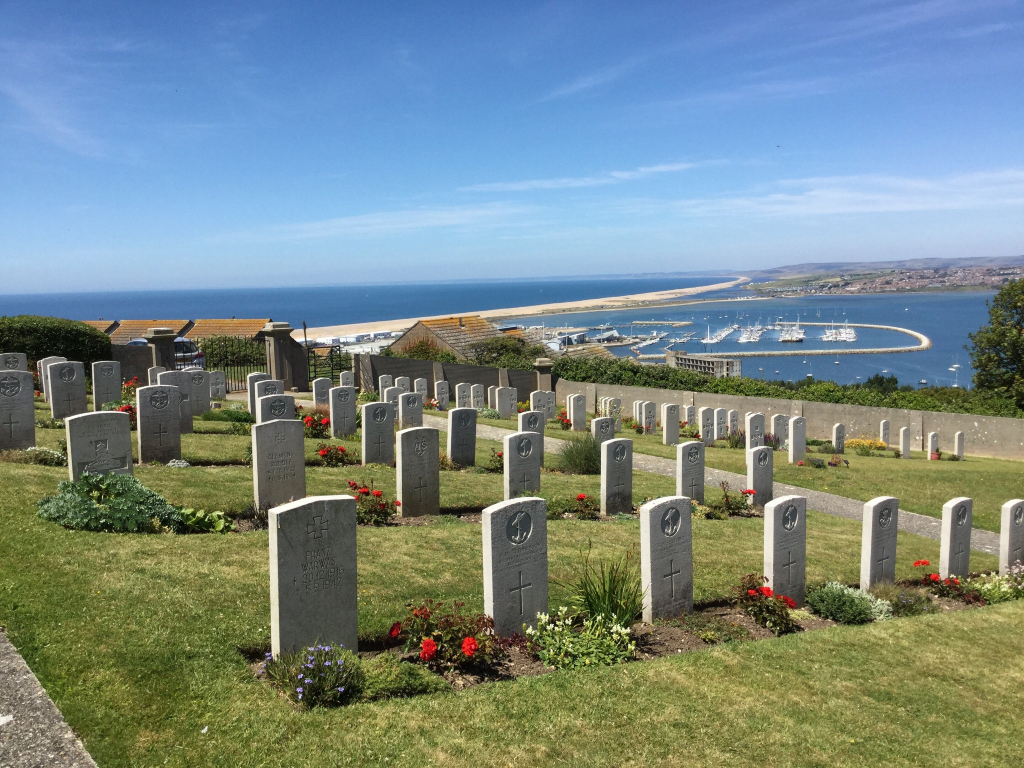 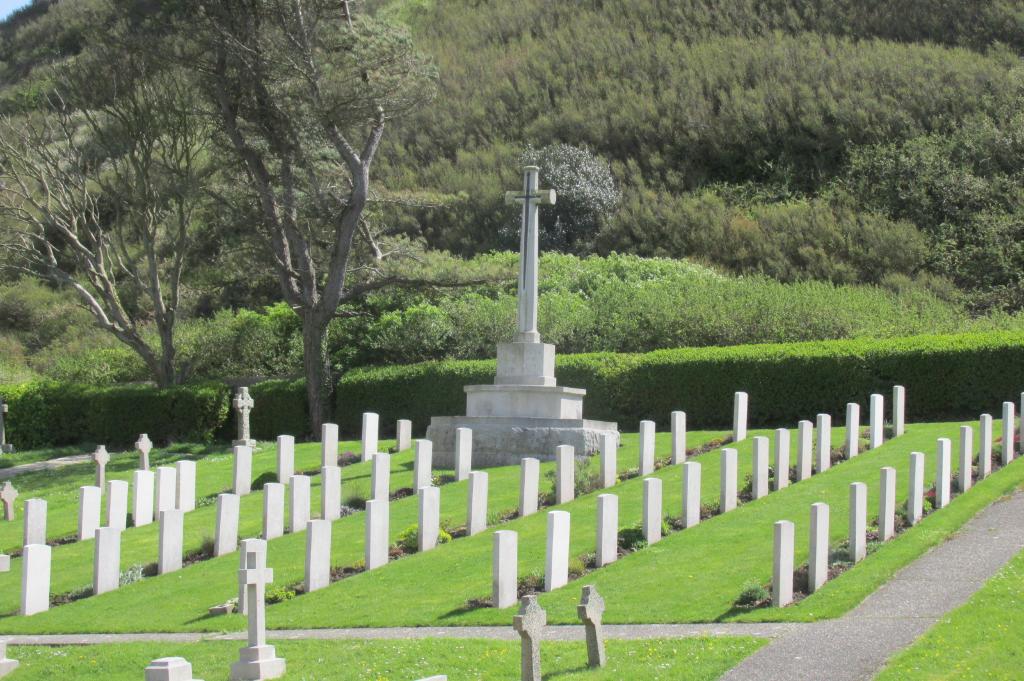 The Isle of Portland, four miles south of Weymouth, famous for its oolitic limestone called Portland Stone which is extensively quarried, is actually a peninsula connected with the mainland by a long narrow ridge of shingle called Chesil Bank. The site was formerly part of a Naval base. The burial ground lies on the northern slope of Portland Bill, three-quarters of a mile due east of Portland railway station. To reach it follow the main road from Victoria Square (the bus terminal at the end of the causeway connecting Portland to the mainland) uphill past the first right-hand hairpin bend and the police station, which is beyond this bend on the left; then take the first turning on the left (Verne Common Road) through and just past the council estate to a track running left downhill. From this point the cemetery can be clearly seen. It is divided into three parts, Church of England, Roman Catholic and Non-Conformist, and contains war graves of both World Wars.

Please note, the cemetery is on Ministry of Defence land and on some occasions the top gate is locked to vehicles (although access on foot is still possible). If the gate is locked and you need to enter the Cemetery by car, a key is held at the Control Gate at the Port.

Portland Harbour is a manmade harbour attached to the north of Portland. Originally it was a natural anchorage known as Portland Roads, protected by Portland to the south, Chesil Beach to the west and mainland Dorset to the north. Portland Roads was transformed into a naval base following the building of two breakwater arms in the mid-19th century.

The Cemetery was established by the War Office in 1876 for the burial of the soldiers garrisoned at Verne Citadel (part of the harbour defence fortifications) and Royal Navy sailors based at Portland. In 1907 the site was transferred to the Admiralty, who went on to extend the site to the west in 1914.

Throughout the First World War, Portland Harbour was used regularly for training exercises and patrols for German U-boats. There are 67 burials from the First World War, 5 of which are unidentified. In addition, there is a Special Memorial to a casualty buried in Portland (St. George) Churchyard.

After the War the maintenance of the Cemetery was passed to the Imperial War Graves Commission and in November 1926, the Cross of Sacrifice was unveiled in the presence of detachments from ships stationed at Portland and the local garrison.

With the outbreak of the Second World War, Portland Harbour continued hosting training exercises. However, after Germany’s successful invasion of France, the naval base quickly became the target of air attacks. On 4th July 1940, HMS Foylebank was attacked while at Portland Harbour, which resulted in her sinking on the 5th. Over 70 crew members lost their lives, some of whom are buried at Portland Royal Naval Cemetery, the rest are commemorated on memorials to the missing.

By May 1944, both Portland Harbour and Weymouth Harbour were used as part of the D-Day preparations. They were major embarkation points for American troops, particularly the US 1st Division who embarked for ‘Omaha Beach’ in June 1944.

There are 103 burials (including 1 Norwegian Merchant Navy seaman and 12 German airmen), 10 of which are unidentified, from the Second World War, the majority of which are in the Church of England section, near the Cross of Sacrifice.

The Cemetery was extended eastwards in the mid-20th century, where many post-Second World War burials are found.

In 1996 the Naval base at Portland was closed.