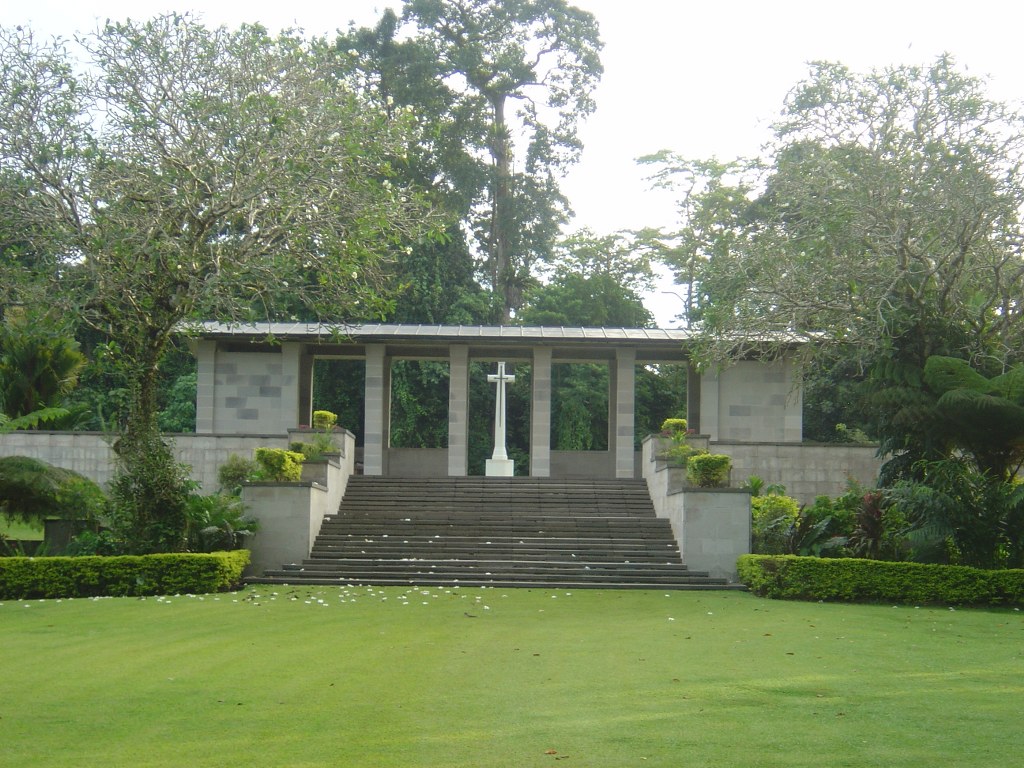 Lae is a town and port at the mouth of the Markham River on the Huon Gulf, and Lae War Cemetery, where the Lae Memorial is situated, is located adjacent to the Botanical Gardens in the centre of Lae.

The Japanese attack on New Guinea, a necessary preliminary to the projected invasion of Australia, commenced with heavy air raids on Lae and Salamaua, followed by the landings of troops. At Lae, a town and port at the mouth of the Markham River on the Huon Gulf, 3,000 Japanese landed on 7 March 1942. There were landings, too, at Salamaua. The enemy did not however immediately attempt the conquest of the island, but on 21 July he landed troops at Buna and Gona on the east coast in preparation for a drive through the Owen Stanley Mountains across the Papuan peninsula to Port Moresby. The vital stage of the New Guinea campaign dates from that time. Lae and Salamaua became bases from which this southward drive was launched until it was stopped at Ioribaiwa Ridge, a point within 35 miles of Port Moresby.

When in January 1943 the Japanese renewed their attempts to reach Port Moresby, this time by the Markham and Bulolo valleys, their first objective was Wau, with its airfield. With reinforecements landing on the airfield only 800 yards from the enemy, the attack was held and the Japanese withdrew in February. Thereafter the initiative passed to the Australian troops who steadfastly forced the Japanese back. On 11 September 1943 Salamaua was captured and on 16 September, after attack by seaborne and airborne forces, Lae was taken.

Men of the Royal Australian Navy who lost their lives in the south-western Pacific region, and have no graves but the sea, are commemorated on the Plymouth Naval Memorial in England, along with many of their comrades of the Royal Navy and of other Commonwealth Naval Forces.

The Lae Memorial, contained within the entrance building of Lae War Cemetery, takes the form of bronze tablets fixed to walls linking the end columns of the building, upon which are engraved the names of members of the Australian Armed Forces. Above the tablets is an inscription which reads:

1939 - HERE ARE RECORDED THE NAMES OF THE OFFICERS AND MEN WHO DIED IN NEW GUINEA, ON LAND, AT SEA AND IN THE AIR, BUT TO WHOM THE FORTUNE OF WAR DENIED THE KNOWN AND HONOURED BURIAL GIVEN TO THEIR COMRADES IN DEATH - 1945.