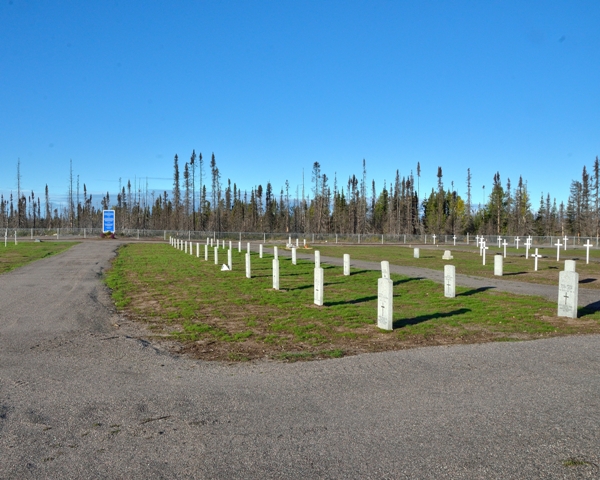 The cemetery grounds are open for visitation all day every day.

Goose Bay lies at the head of Lake Melville, connected with the sea by Hamilton Inlet on the coast of Labrador. It is the site of a great trans-Atlantic airport, which was first opened in 1941 as a Royal Air Force base for the transport of aircraft to England by the R.A.F. Ferry Command. During the war, Goose Bay, in No. 6 Military District, was the Area Headquarters of the Atlantic Command in Labrador, a Canadian garrison being stationed here for the protection of what rapidly became one of the great centres of world air transport. The cemetery, commonly known as "Lest-we-Forget" Cemetery, is 5 kilometres west of the centre of the R.C A F. Station camp on the outer perimeter road. Of the 32 burials in the cemetery, 28 of the war graves contain airmen, most of whom were killed when their aircraft crashed in this area. Of these, 21 airmen belonged to the Royal Canadian Air Force, two to the Royal Air Force, one to the Royal Australian Air Force, three to the R.A F. Ferry Command and one to the R.A.F. Transport Command. In the remaining war graves are buried four Canadian soldiers.