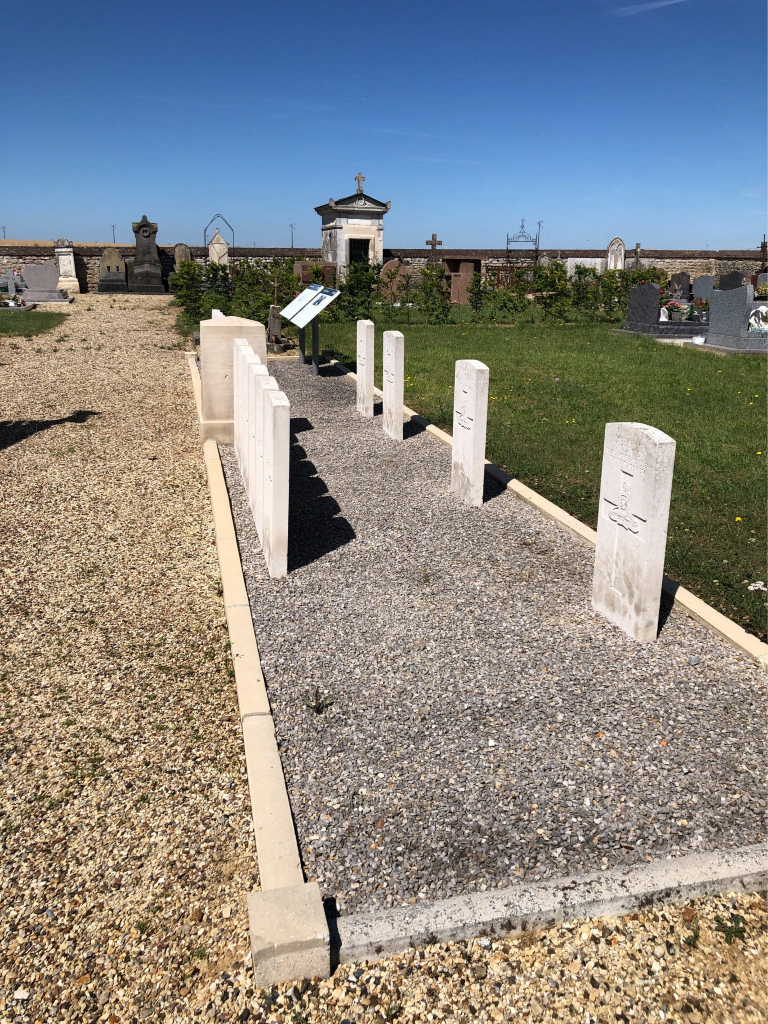 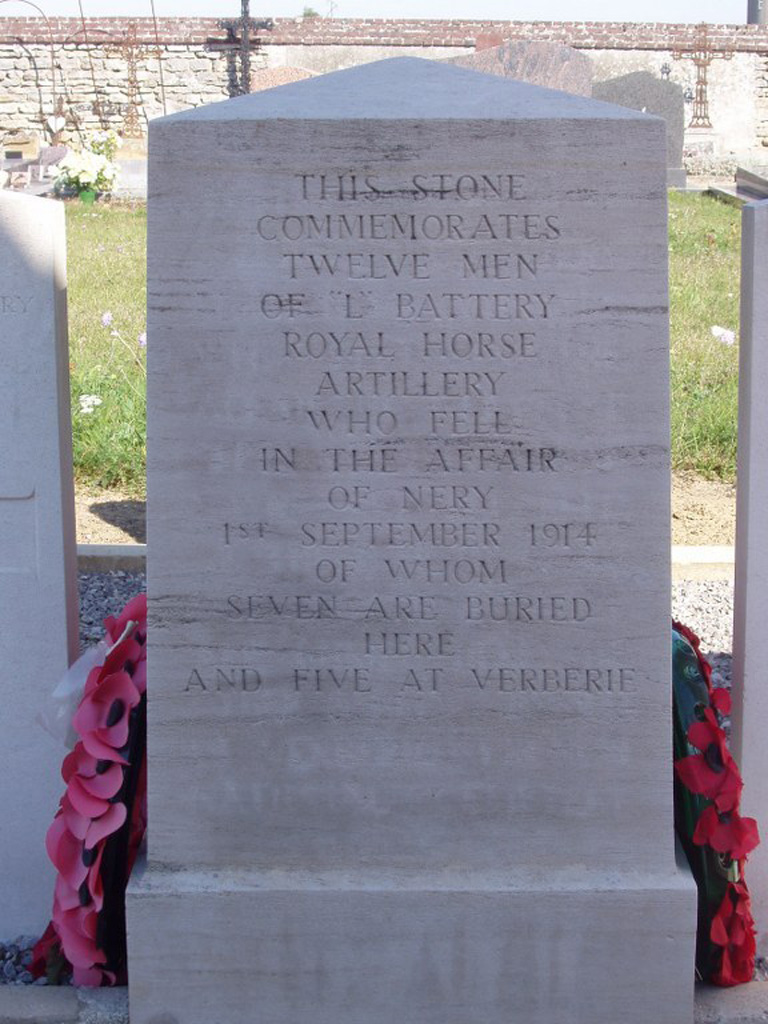 Nery is a village in the Department of the Oise, between Verberie and Crepy-en-Valois. The communal cemetery is at the north-west corner of the village.

There are now nearly thirty Commonwealth casualties of the First World War commemorated at Néry Communal Cemetery. A vault stands on the west side of the cemetery, in which are buried three officers who fell during the action at Néry on the morning of 1 September 1914 and a fourth (brother of one of the three) who was killed in 1918. A Special Memorial in the North-west quarter, records the names of 12 men of "L" Battery, Royal Horse Artillery, who were killed or fatally wounded during the same engagement.

The Action at Néry

In the aftermath of the Battle of Mons, which took place on 23 August 1914, the British forces, along with their French allies, began retreating south west toward Paris. By the evening of 31 August, most British units had crossed the Aisne between Soissons and Compiègne and halted for the night on the south banks of the river. The men of the 1st Cavalry Brigade bivouacked in and around the village of Néry with orders to begin moving again at first light. The Brigade numbered almost 2,000 men and consisted of three cavalry regiments which were supported by L Battery of the Royal Horse Artillery. The cavalry were stationed in Néry while L Battery was billeted in a sugar factory just south of the village.

A heavy mist hung in the valley and visibility was poor as the sun rose on 1 September. The Brigade had awoken at 4.30 but a decision was made to delay departure for an hour and a half until the weather cleared. As they waited, officers and men busied themselves watering the horses and preparing breakfast. At approximately 5.30 a.m. a unit of the 11th Hussars which had been patrolling the woods outside Néry dashed into the village and reported that they had sighted a large enemy force. Just minutes after the patrol arrived on the scene, the Brigade came under heavy shell, machine-gun and rifle fire from the heights overlooking the village to the east.

The attack caught the Brigade almost completely by surprise and the effect of intense fire from above the village was devastating. The horses of L Battery bolted and several gunners were killed or wounded as they tried to take cover. Despite the chaos caused by the attack, Captain Edward Bradbury immediately began issuing orders and managed to get three of the battery’s six guns moved into firing positions. Two of these were soon put out of action by German shell fire, but Bradbury, along with Sergeant David Nelson and two gunners, manned a third gun and kept up a steady rate of fire against the German lines. The gun continued firing for over two hours, and successfully drew German artillery fire away from the British cavalry. The Brigade was able to hold its position and engage the attackers until reinforcements from III Corps arrived and forced the German units on the heights to retreat.

The German force that launched the attack at Néry amounted to over 5,000 men of the 4th Cavalry Division and thus outnumbered the 1st Cavalry Brigade by more than two to one. L Battery was almost completely destroyed during the fighting, but casualties in the rest of the brigade were relatively light. Captain Bradbury was fatally wounded while fetching ammunition and posthumously awarded the Victoria Cross. Sergeant-Major George Dorrell and Sergeant Nelson both survived the fighting and were awarded Victoria Crosses. The Commander-in-Chief of the BEF, Sir John French, formally mentioned the Brigade in despatches on 14 September.