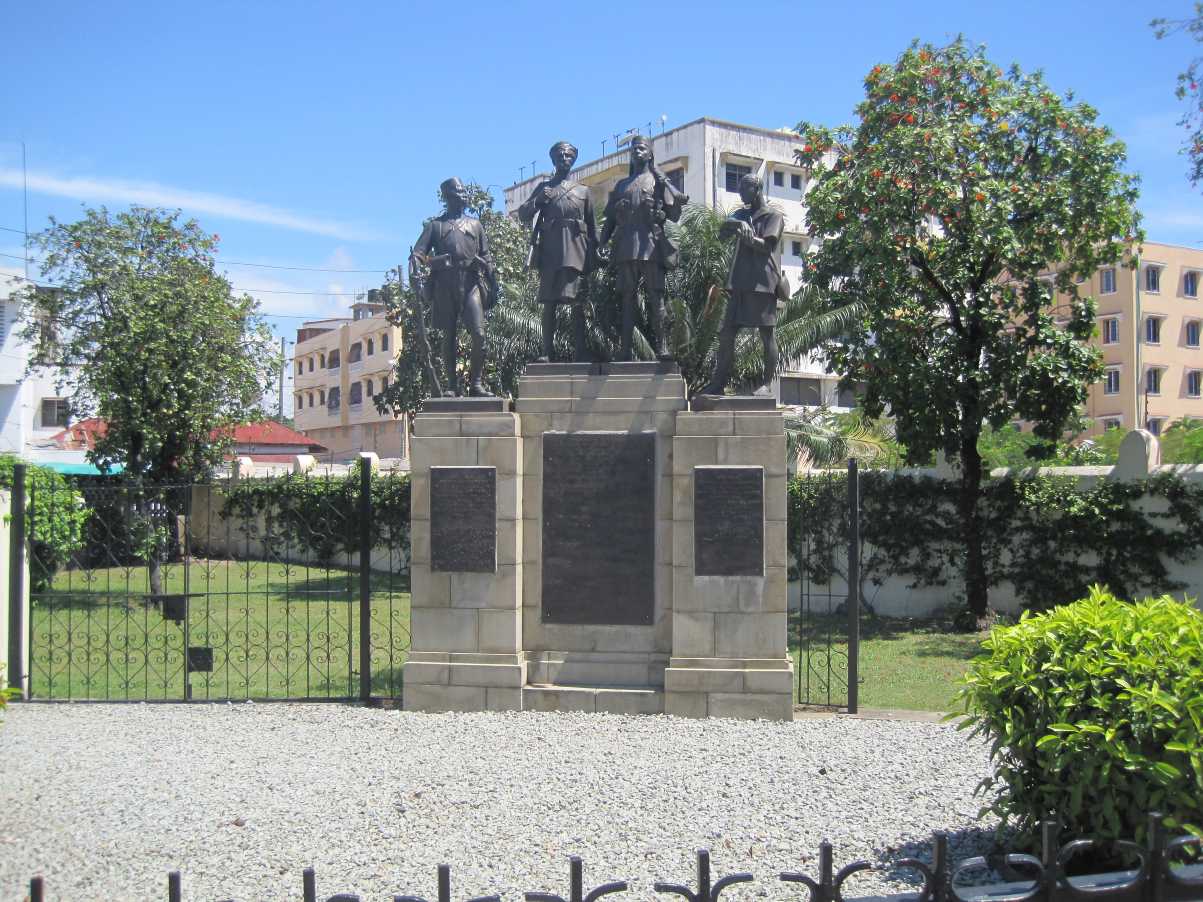 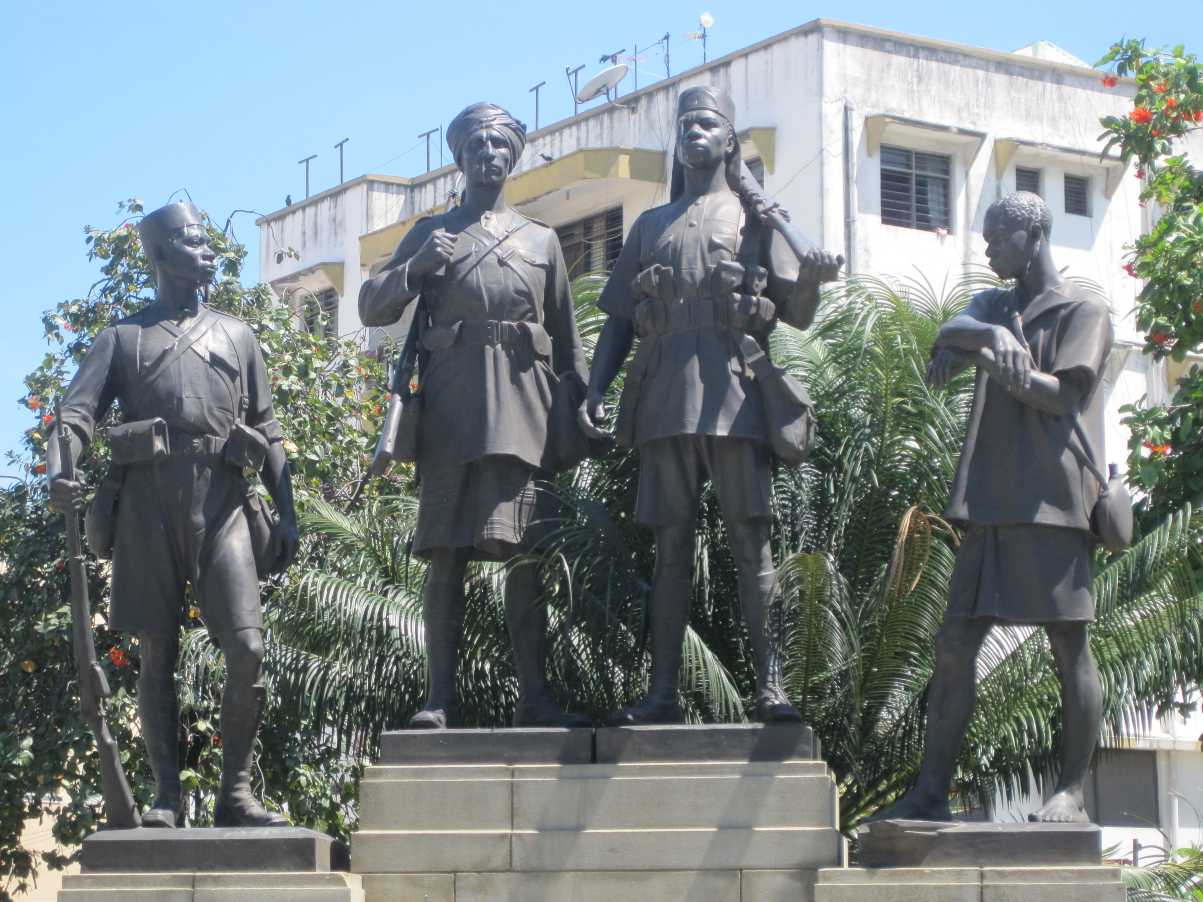 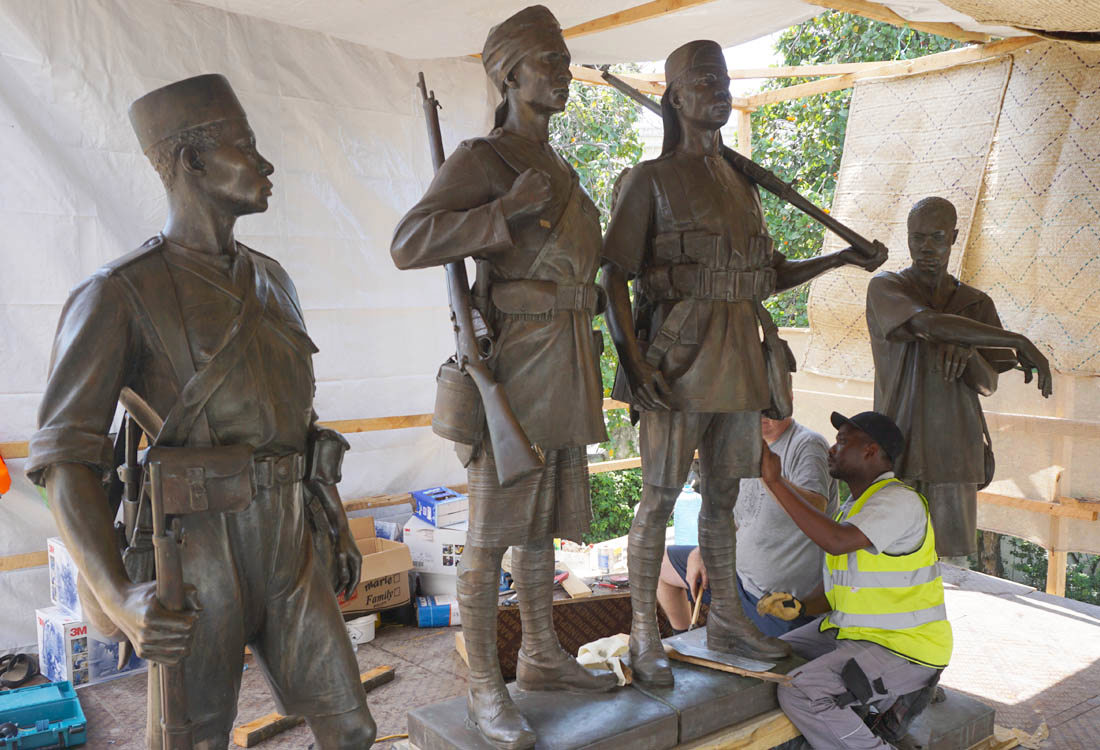 Some of the first and last shots of the First World War were fired in Africa. Hundreds of thousands of men from across the continent were mobilised by European powers on both sides and drawn into long and bloody conflict.

These stories are often overshadowed by tales from the Western Front.

But the Commonwealth War Graves Commission’s commitment in Africa is huge. It spans 43 countries. It’s also the site of some unique memorials that, when unpicked, tell the nuanced task of remembrance on this vast continent.

In 2017 the appearance of 3D scanners in the centre of Mombasa drew crowds of curious locals as the CWGC began restoration of one of these memorials.

The Mombasa African Memorial – one of four to be built and the first to be restored – was unveiled in 1927. It features four tall bronze men – each representing the unique make-up of the forces who served; a vivid reminder of the Africans who died under the banner of the British Empire. 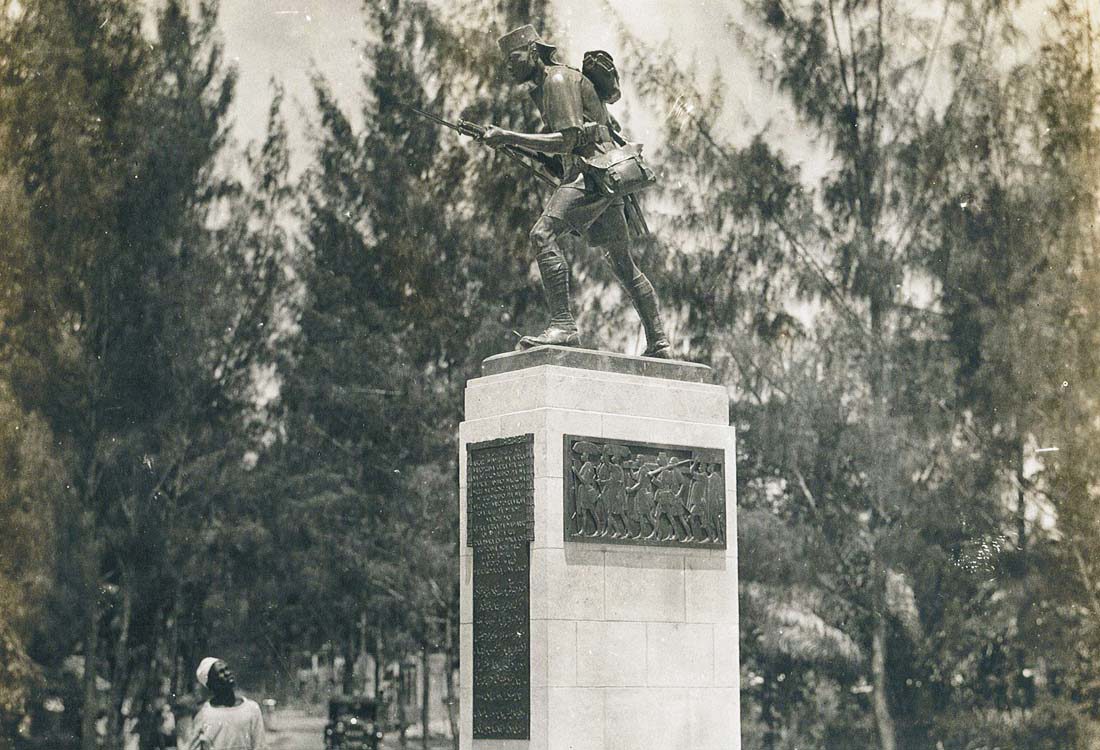 A young boy looks up at the Dar Es Salaam African Memorial in this photo from the CWGC archive.

Along with similar statues in Nairobi, Dar Es Salaam and Abuja, these are the only places in the world where you will see something so lifelike at a Commission site.

They were created out of necessity.

By the time the Commission was able to gain access to East Africa and begin the difficult work of locating the First World War dead there was little to no information available about the majority of Africans who had served, including accurate death tolls or burial locations or even their names. 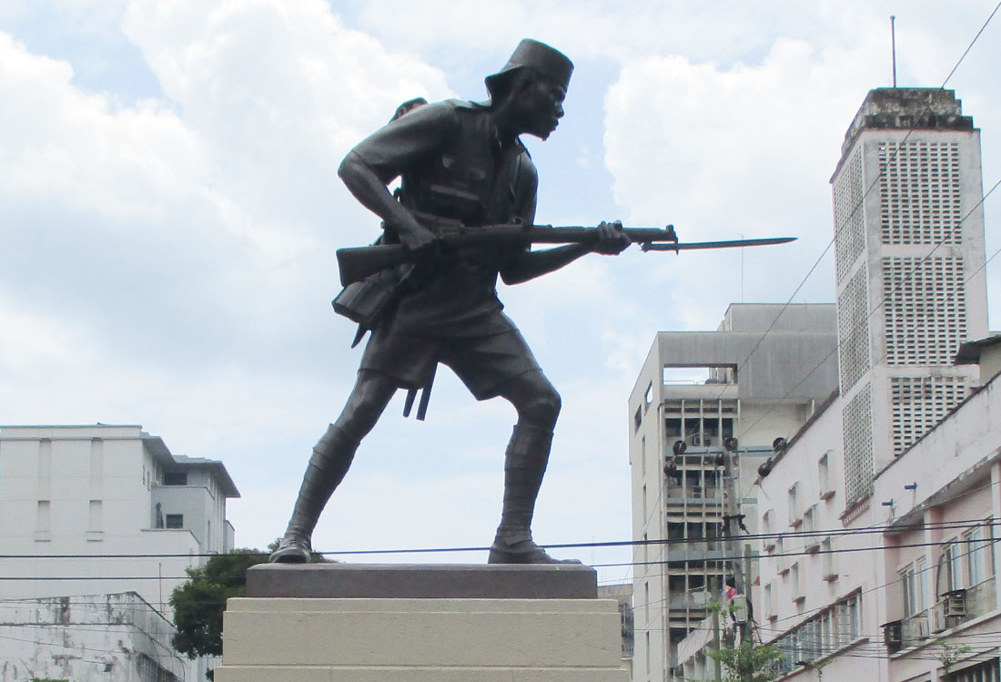 The Dar Es Salaam African Memorial will be the latest to be restored thanks to 3D scanning technology. 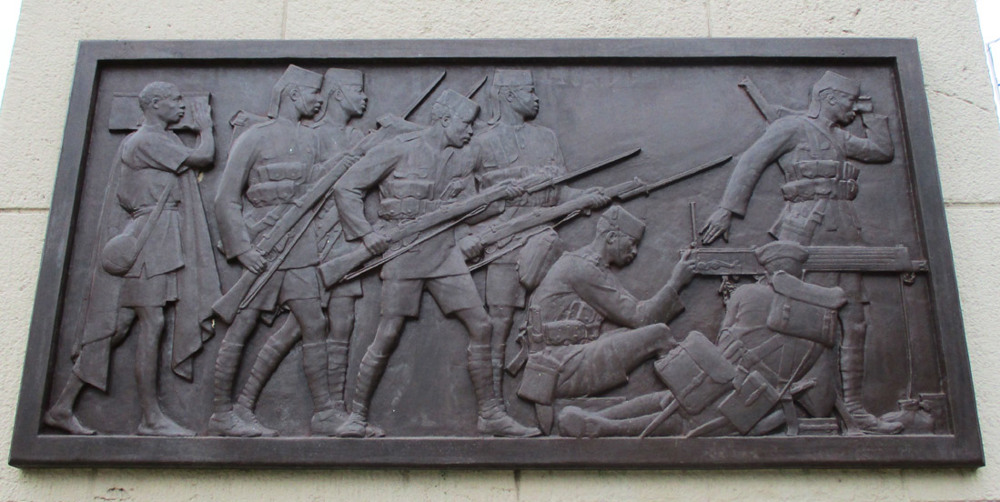 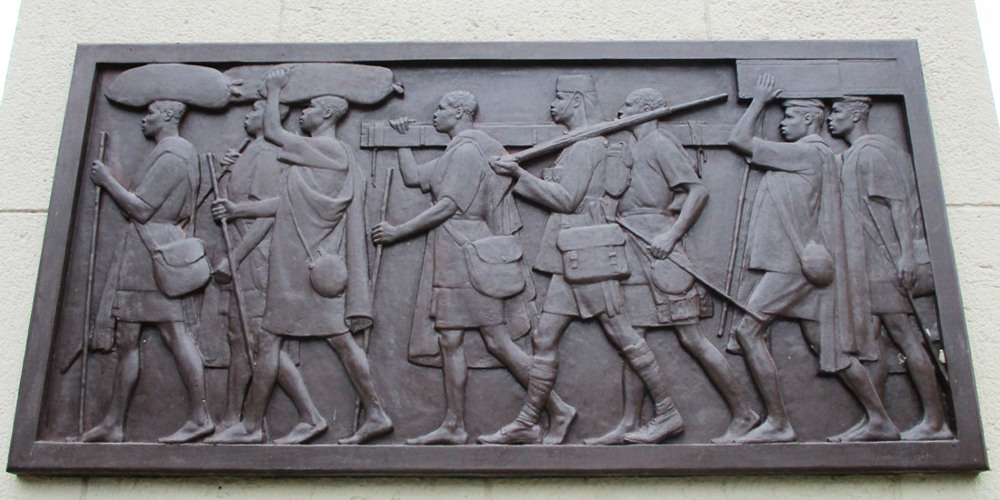 Telling more of the story of those commemorated.

Without definitive proof of where, or even how many people had died, the model being drafted in Western Europe – giving every person a name on a headstone above a known grave or a memorial to the missing – would never be possible. Instead, something else was needed.

After much soul-searching, the Commission settled on bronze statues. Each one is unique, but similar in form and evokes a real sense of those being commemorated.

So much so that a mother in Mombasa was adamant that it was her boy who stood up on the pedestal and he had been transformed into “an iron man who could neither talk to her nor see her”. 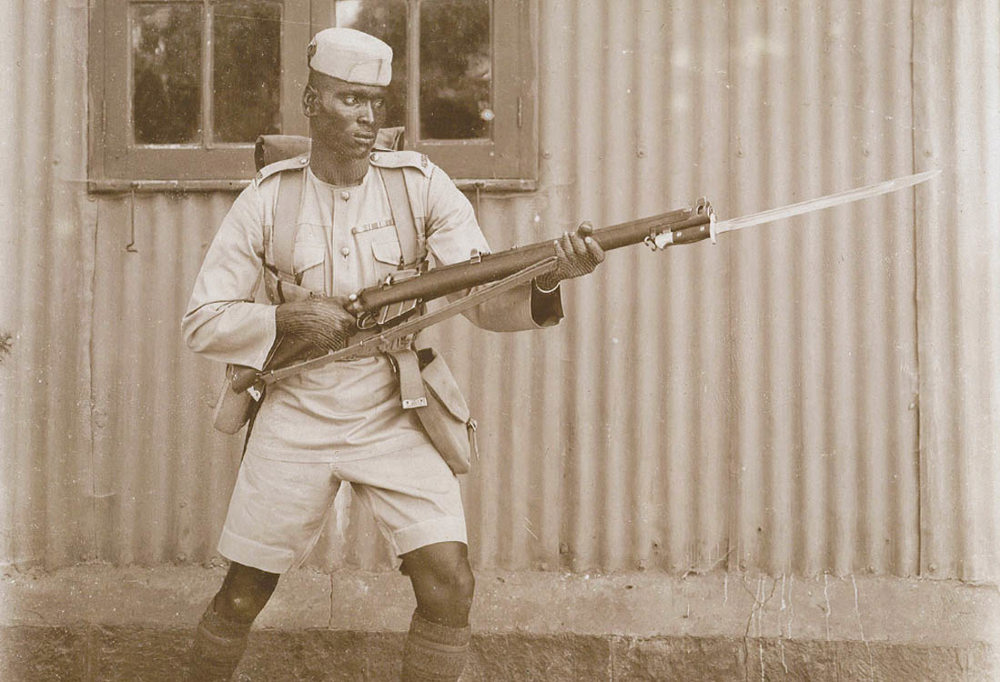 Posed photographs were commissioned to allow sculptor James Stephenson to make each sculpture as lifelike as possible. 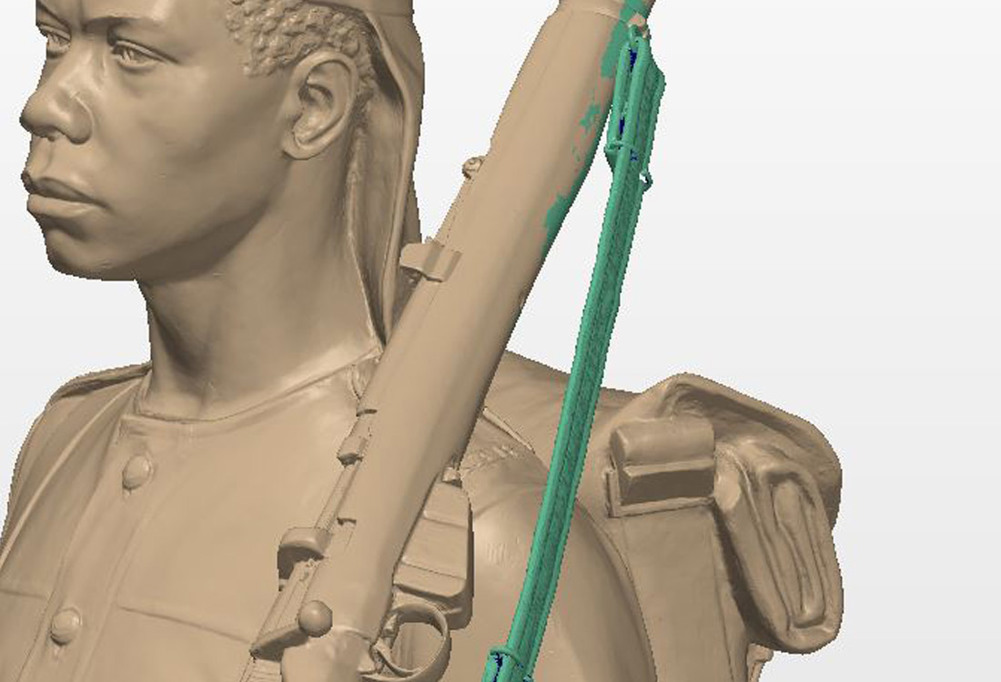 To achieve this, sculptor James Stevenson studied specially commissioned photos of servicemen from the various regions to capture their likeness. Great attention to detail was paid, right down to the clothing, weapons and equipment each would have had; be they an Intelligence Corps scout or an Arab rifleman.

Such was the care, that restoration of these statues – which had no original designs or blueprints – posed a challenge. 3D scanning and careful comparisons of original photographs allowed damage and deterioration to be put right to within a millimetre. 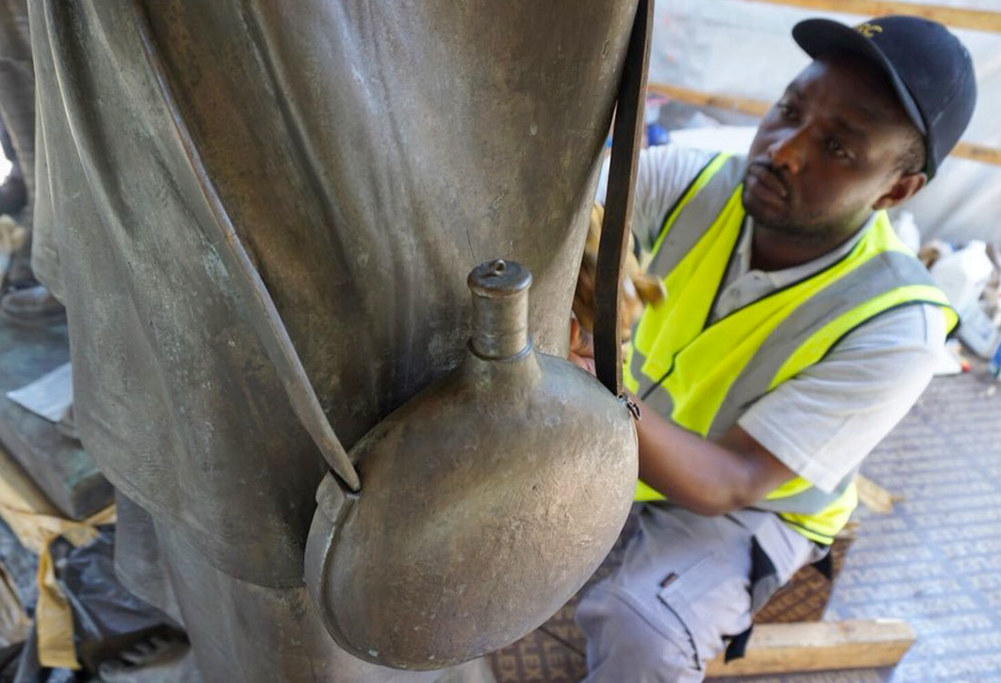 The detailed parts of these statues were replaced with millimetre precision thanks to the 3D scans.

And today, thanks to state-of-the-art technology, these striking memorials keep telling that story of those nameless men, for the next century.

Mombasa is an island city off the Kenya coast. The Mombasa African Memorial is situated in the centre of town, in the Kikowani district, near the new Mosque, at the junction of Mombasa Road (the A109) and Mackawi Road.

At the outbreak of the First World War Tanzania was the core of German East Africa. From the invasion of April 1915, Commonwealth forces fought a protracted and difficult campaign against a relatively small but highly skilled German force under the command of General von Lettow-Vorbeck. When the Germans finally surrendered on 25 November 1918, fourteen days after the European armistice, their numbers had been reduced to 155 European and 1,168 African troops.

The African troops and followers who died with the Commonwealth forces during the East African campaign of the First World War are for the most part commemorated by three memorials, one at Nairobi, one at Mombasa and one at Dar es Salaam. The backbone of the combatant force in East Africa were the King's African Rifles, organised in seven regiments, of which three (the 1st, 3rd and 4th) existed in 1914. The whole force eventually numbered 22 battalions. The officers and necessary technical troops were from the United Kingdom, the other ranks Sudanese, or men from the East African protectorates. They were later reinforced firstly from India, South Africa and in 1917 from West Africa. The Arab Rifles, mainly Yemeni and Hadramouts, served with distinction throughout the war and the Intelligence Corps, represented by the Askari, played an important and dangerous role as scouts.

The African combatant troops raised for the East African campaign numbered 34,000. The non-combatant porters, stevedores and followers of the Military Labour Corps 600,000. Almost 50,000 of these men were lost, killed in action died of sickness or wounds, but as no complete record of their names exists, no names appear on the memorials.