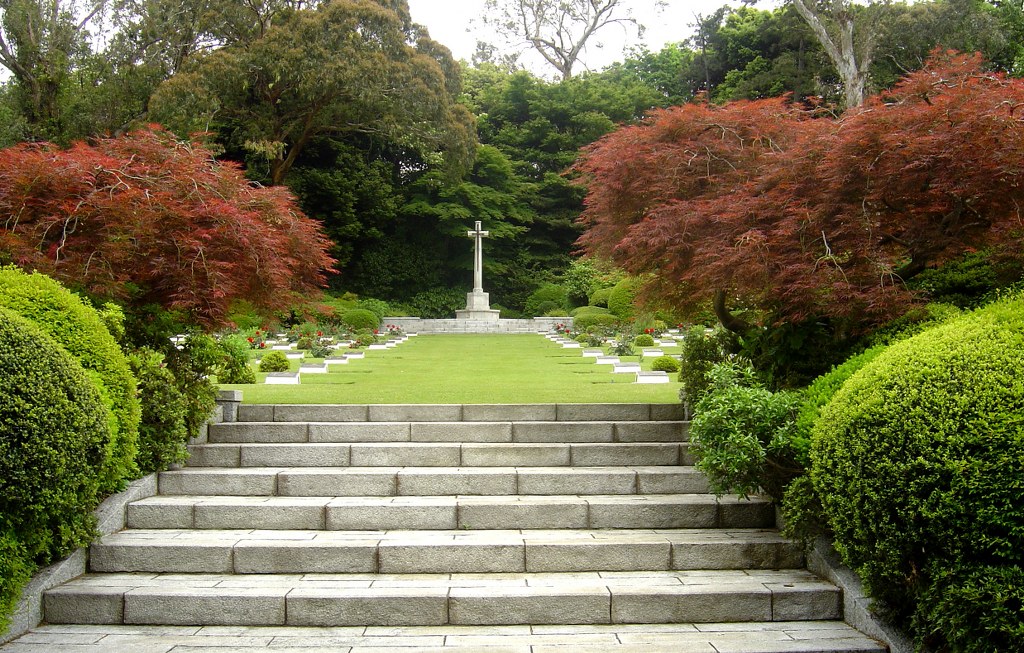 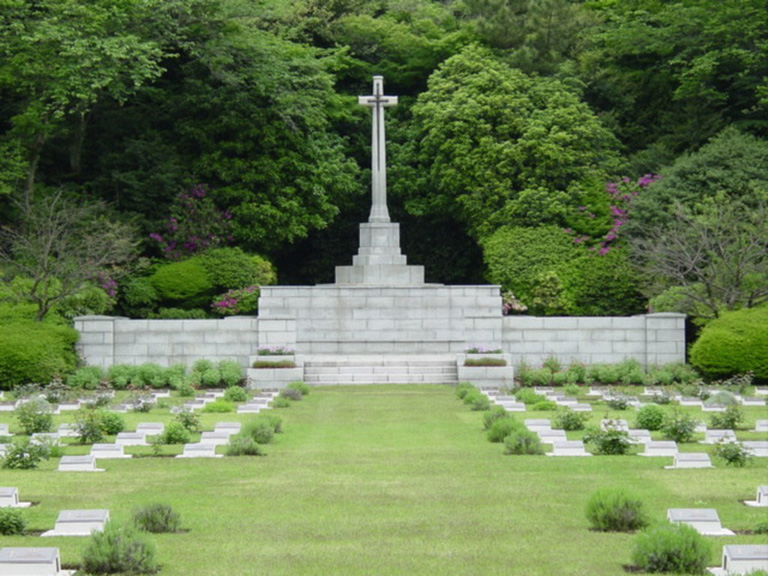 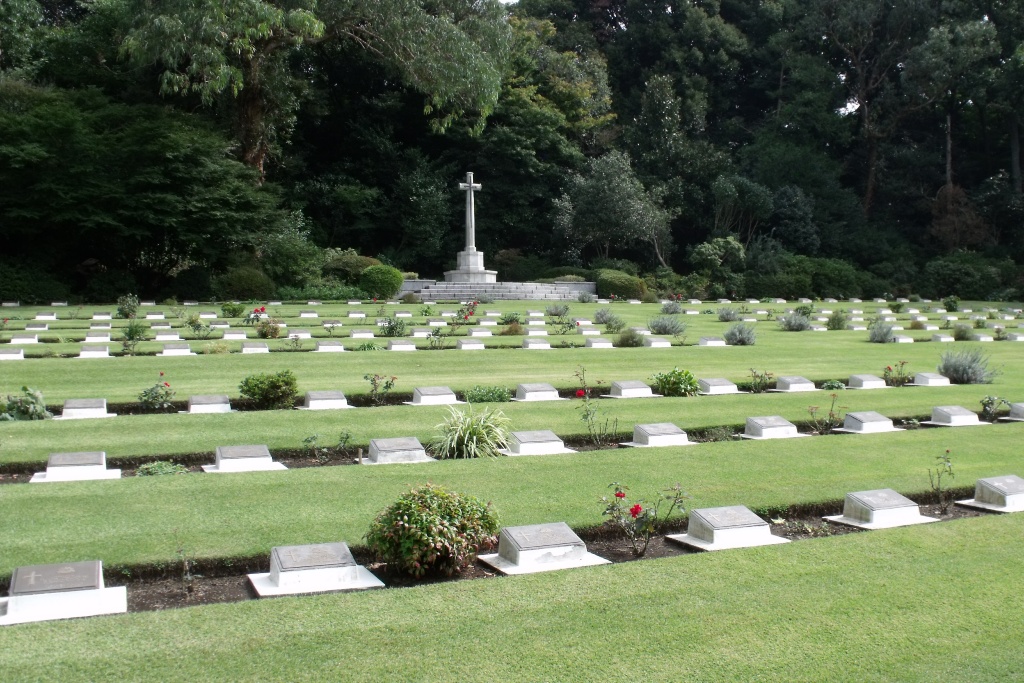 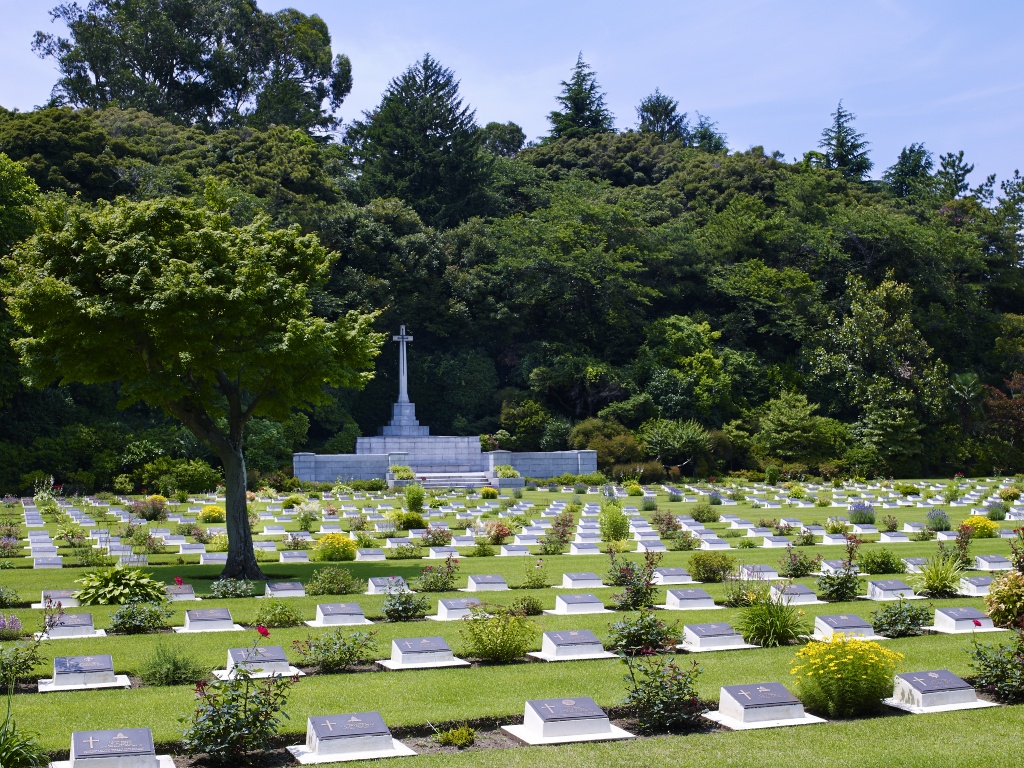 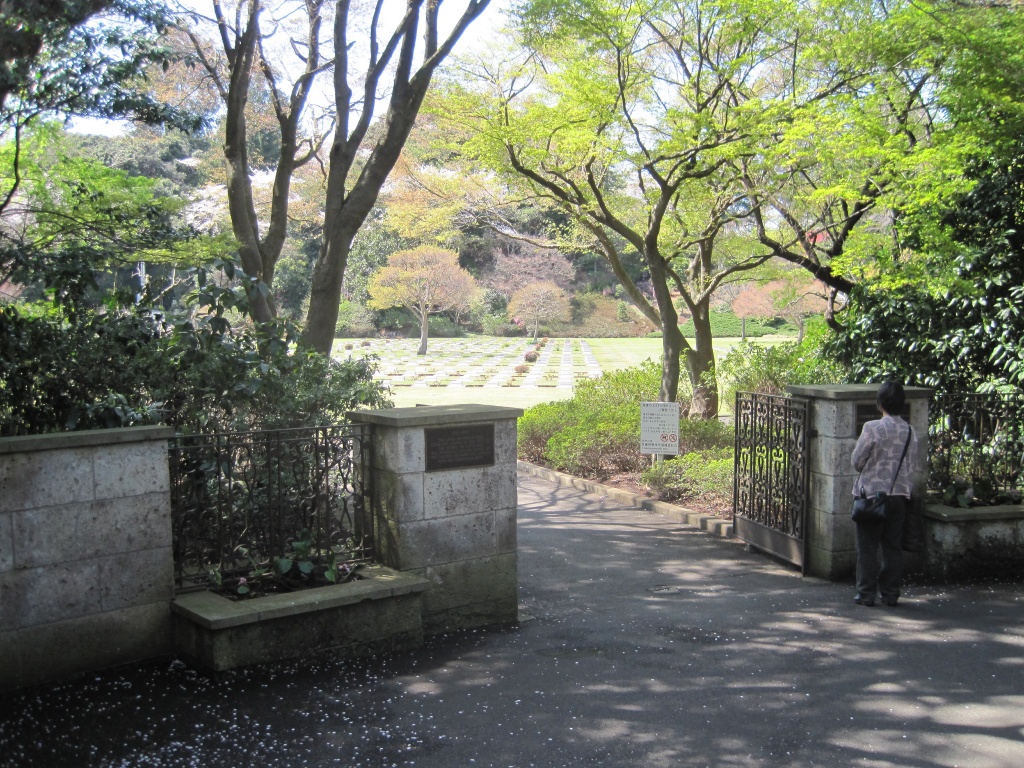 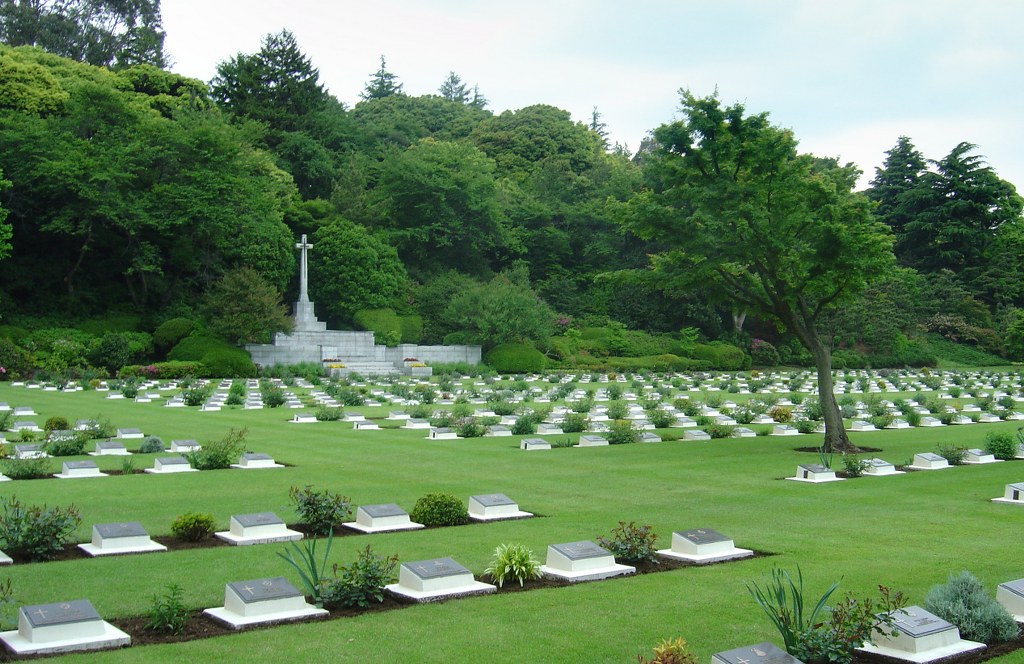 Yokohama War Cemetery is 9 kilometres west of the city centre on Jido-Yuenchi-Dori, Hodogaya Ward, which branches about 300 metres left off the old Tokaido highway. The best way to reach the Cemetery is by taking the number 53 bus (correct as at 24/7/2019), which departs every 20 to 30 minutes from Hodogaya Railway Station, approximately 4 kilometres away. To locate the bus stop, leave the railway station via the ‘East’ exit, in the direction of Tokaido Highway. It is on the opposite side of the Highway and can be accessed via the pedestrian bridge. When boarding, please let the driver know that you need the bus stop at Nagatadai Kouen Mae (永田台公園前) and will be visiting ‘Yokohama War Cemetery’ (‘英連邦墓地eirenpobochi’). On arrival at Nagatadai Kouen Mae, you should follow the road for approximately 100 metres, in the direction that the bus was travelling. The Cemetery is located on the left-hand side of the road and is marked by two brick pillars and a metal gate. There is also a sign outside the Cemetery, showing the CWGC logo and ‘Commonwealth War Cemetery Yokohama’ written in English. The Cemetery’s address is 238 Karibachō, Hodagaya-Ku, Yokohama 240. Yokohama Post War Plot is situated in Yokohama War cemetery and is reached by going up through the United Kingdom Section, up the steps to the Indian Section and then following a sloping path.

The Cemetery is open every day, including public holidays. Wheelchair access is possible via the main entrance. If you are travelling by car, then there is parking available within the Cemetery.

YOKOHAMA WAR CEMETERY was constructed by the Australian War Graves Group after the Second World War and contains the graves of Commonwealth servicemen who died in Japan as prisoners of war or with the occupying forces after the war. It comprises of four main parts; the United Kingdom section, the Australian section, the Canadian and New Zealand section and the Indian Forces 1939-1945 section.

The cemetery contains 1,555 Commonwealth burials and commemorations of the Second World War, including 53 unidentified burials and a small number of special memorials to casualties known to be buried in the cemetery, whose graves could not be precisely located. There is also one First World War burial and a Dutch war grave. The POST WAR PLOT contains 171 non-war service and civilian burials.

The cemetery also contains the YOKOHAMA MEMORIAL which commemorates 20 members of the Army of Undivided India and the Royal Indian Air Force who died while serving with the occupation forces in Japan, for whom no burial or cremation information exists.

The YOKOHAMA CREMATION MEMORIAL, a shrine which houses an urn containing the ashes of 335 soldiers, sailors and airmen of the Commonwealth, the United States of America and the Netherlands who died as prisoners of war in Japan also stands within the cemetery. Their names (save for 51 who were not identified) are inscribed on the walls of the shrine.